Description. Ammocoetes (Table 1). Maximum total length is 189 mm. Trunk myomeres vary from 54 to 60 with a mode of 57. Caudal fin shape is rounded in 14 individuals and spade-like in one. Lateral-line neuromasts are unpigmented and clearly appear as such by 79 mm TL. Metamorphosing ammocoetes vary in TL from 135–156.5 mm.

Adults (Tables 2–3, Figs. 1–2 View FIGURE 1 View FIGURE 2 ). Total length varies from 124.5–158.5 mm. The dentition is extremely variable (Table 3). The supraoral lamina bears usually two unicuspid lateral teeth separated by a toothless bridge. In two cases, one or both lateral teeth were bicuspid. The infraoral lamina bears 7–11 teeth, usually unicuspid. In two cases, a bicuspid tooth was present. There are usually three endolateral teeth on each side of the oral disc (85 % of counts), but four teeth also occur (15 %). The most common endolateral formula is 2 – 2 – 2, but in three cases a unicuspid and in two cases a tricuspid tooth occurred. The first anterial and first posterial rows possess 4–7 teeth and 10–15 teeth, respectively, exhibiting great variability in the arrangement of the types of teeth (unicuspid, bicuspid or tricuspid), with at least one bicuspid tooth in 21 of 26 individuals in the former and 20 of 26 in the latter, in various positions in those rows. There are 3–4 rows of anterials and the same range of exolateral rows of either side of the oral disc and 1–3 rows of posterials. In eight individuals examined, including the holotype, the transverse lingual lamina exhibited an enlarged median cusp, but lateral cusps were absent and the longitudinal lingual laminae bore no discernible teeth ( Fig. 2 View FIGURE 2 A). Two specimens possessed what we term accessory cusps inside the ring formed by the supraoral and infraoral laminae and the left and right endolaterals. One specimen had an accessory unicuspid tooth placed at the level of the third left endolateral and the other two unicuspid teeth, one on each side below the supraoral lamina. The velar apparatus possessed 2–5 very small tentacles, with a central tentacle present in two cases and absent in three. There were no tubercles or wings. Trunk myomeres vary from 53 to 61, with strong modes of 56 and 57. In the 23 individuals, including the holotype ( Fig. 1 View FIGURE 1 ), in which the caudal fin shape could be determined, it was invariably rounded. The mean intestinal width taken at the origin of the first dorsal fin was 0.8 mm (Range: 0.5 –1.0 mm; n = 23). Lateral line neuromasts are unpigmented.

Kottelat & Freyhof (2007) stated that the new species from the Loúros River drainage was distinguished from Eudontomyzon hellenicus   by having a longer tail (29–33 % TL vs. 26–30 % TL) and a spade-like (vs. rounded) caudal fin. The data for the tail length is taken directly from Renaud (1986) and we concur that this is correct. However, we disagree with the difference in the shape of the caudal fin. Both E. graecus   and E. hellenicus   almost invariably possess rounded caudal fins. In E. graecus   , only one out of 15 ammocoetes (7 %) had a spade-like caudal fin and all others, as well as the 23 adults for which the shape of the caudal fin could be determined, possessed a rounded caudal fin. Likewise, 202 ammocoetes and 33 adults of E. hellenicus   possessed a rounded caudal fin and only one ammocoete (<1 % of ammocoetes) had a spade-like caudal fin. Additionally, Kottelat & Freyhof (2007) stated that E. hellenicus   reaches 152 mm TL while the lamprey from the Loúros River basin reaches 190 mm TL. This statement is somewhat misleading and requires clarification.

While it is true that the largest ammocoetes and adults of E. hellenicus   are respectively 152 and 151.5 mm TL; those of the Loúros River drainage ( E. graecus   ) are 189 and 158.5 mm TL (Tables 1–2). It appears that Kottelat & Freyhof (2007) were referring to the length of the adult in the case of E. hellenicus   and to the length of the ammocoete in the case of E. graecus   . It is significant to note that both the ammocoetes and the adults of E. graecus   have a relatively longer tail length than that of E. hellenicus   ( Figs. 3 View FIGURE 3 , 4 View FIGURE 4. A B). This means that whatever the selective advantage conferred by the tail length, this persists after metamorphosis.

Karaman (1974) and Holčík & Šorić (2004) reported collecting metamorphosing ammocoetes of E. stankokaramani   from the type locality, respectively, in February-April 1974 and 28 November 1970. The 2–5 month interval between November and February-April represents a rather long period of time for completion of metamorphosis at a single locality. According to Hardisty & Potter (1971), in the species in which metamorphosis has been studied, including the congeneric Eudontomyzon mariae ( Berg, 1931)   , the external signs of metamorphosis are completed in about four to five weeks. A November timing of metamorphosis in E. stankokaramani   is similar to that reported here for E. graecus   . It is thus unfortunate that the metamorphosing individuals collected during February-April by Karaman (1974) have been lost since this represents an anomalous situation.

Unfortunately, no information is available on the external pigmentation in ammocoetes and adults of E. stankokaramani   because Karaman (1974) did not document it and Holčík & Šorić (2004) stated that their specimens had probably lost their pigmentation through prolonged exposure to light.

Distribution. This new species is endemic to the Epirus Periphery, Greece, being found only in the Loúros River and one of its tributaries, Filippiás Brook ( Fig. 5 View FIGURE 5 ).

Evolution and zoogeography. According to Economidis & Bănărescu (1991), the freshwater fish fauna of the Loúros River drainage and that of the Strymon River drainage belong to distinct ichthyogeographic divisions; the former to the South Adriatic-Ionian Division and the latter to the Ponto-Aegean Division, and more precisely to the Thracian-East Macedonia Subdivision. The prevalent theory for the evolution of nonparasitic species is that they are derived from a parasitic ancestor ( Hubbs & Potter 1971). It is difficult, however, to speculate on the origins of the two nonparasitic species E. graecus   and E. hellenicus   as no parasitic ancestor has been identified through a cladistic analysis that integrates both morphological and molecular characters. A cladistic analysis based on 1,133 base pairs of the mitochondrial gene cytochrome b was recently published by Lang et al. (2009), where E. graecus   (labeled as E. hellenicus   from the Ionian Sea basin) and E. hellenicus   constituted a clade that was sister to the Caspian lamprey, Caspiomyzon wagneri   . The conclusion that the two Greek nonparasitic species are sister to C. wagneri   appears premature. As mentioned in Lang et al. (2009), morphological and/or nuclear gene characters would need to be added to the cladistic analysis to further test this hypothesis.

Habitat and biology. This new lamprey species spends its entire life cycle in fresh water and appears to be quite sedentary, based on the capture of all three stages of its life history (i.e., ammocoete, metamorphosing ammocoete and immature adult) at one locality in mid-November. The habitat is characterized by clear, fastflowing water and muddy substrate in which the larvae bury. The substrate may or may not include submerged vegetation. The larval stage lasts an estimated 4–6 years ( Economidis 1995). Metamorphosis occurs in November based on a collection made on the 13 th of that month and would have started at least as early as 20 October based on the capture of already fully metamorphosed adults at this earlier date, but the exact duration of metamorphosis is not known. The onset of metamorphosis may be related to water temperature and summer drought. Adults do not feed as indicated by the fact that the largest ammocoetes (189 mm TL) are considerably larger than the largest adults (158.5 mm TL), coupled with the fact that the intestinal diameter of adults is 0.5 –1.0 mm. The majority of the adult material available (24 of 26 individuals, including the holotype), collected between 20 October and 27 November, represented immature individuals. The other two adults, a male and female collected together, were sexually mature, each possessing a small (1.0 mm long) urogenital papilla. Unfortunately, their precise date of collection was not recorded, only the year. The habitat was shallow, clear water with a gravel substrate. Spawning has not been witnessed but is presumed to occur in late winter.

Conservation. This new species is inherently at risk because of its very restricted distribution. Eudontomyzon hellenicus   and E. graecus   (then treated together as a single species) were given a status of Threatened to Endangered by Economidis (1995). A more recent evaluation of the two species (again treated as one) by Crivelli (2006) up-listed the status to Critically Endangered according to the following IUCN (2001) criteria: B 1 ab(i,ii,iii,iv,v) + 2 ab(i,ii,iii,iv,v). The situation is even more critical when one considers the two species individually. Water regulation, habitat alteration and pollution are the main threats. In the Loúros River drainage specifically, irrigation canals and draining ditches, often with cement-lined sides and bottom, coupled with water-level fluctuations, have resulted in reduced habitat for ammocoetes as well as reduced spawning areas for adults ( Economidis 1995).

Etymology. The new species name is an adjective formed from the noun Graeci, a tribe of Hellenes living since Prehistoric times in the area where the lamprey occurs. The Graeci were early on in contact with the inhabitants of the Italian Peninsula, mainly Latins, who then referred to all of the Hellenes as Greeks. 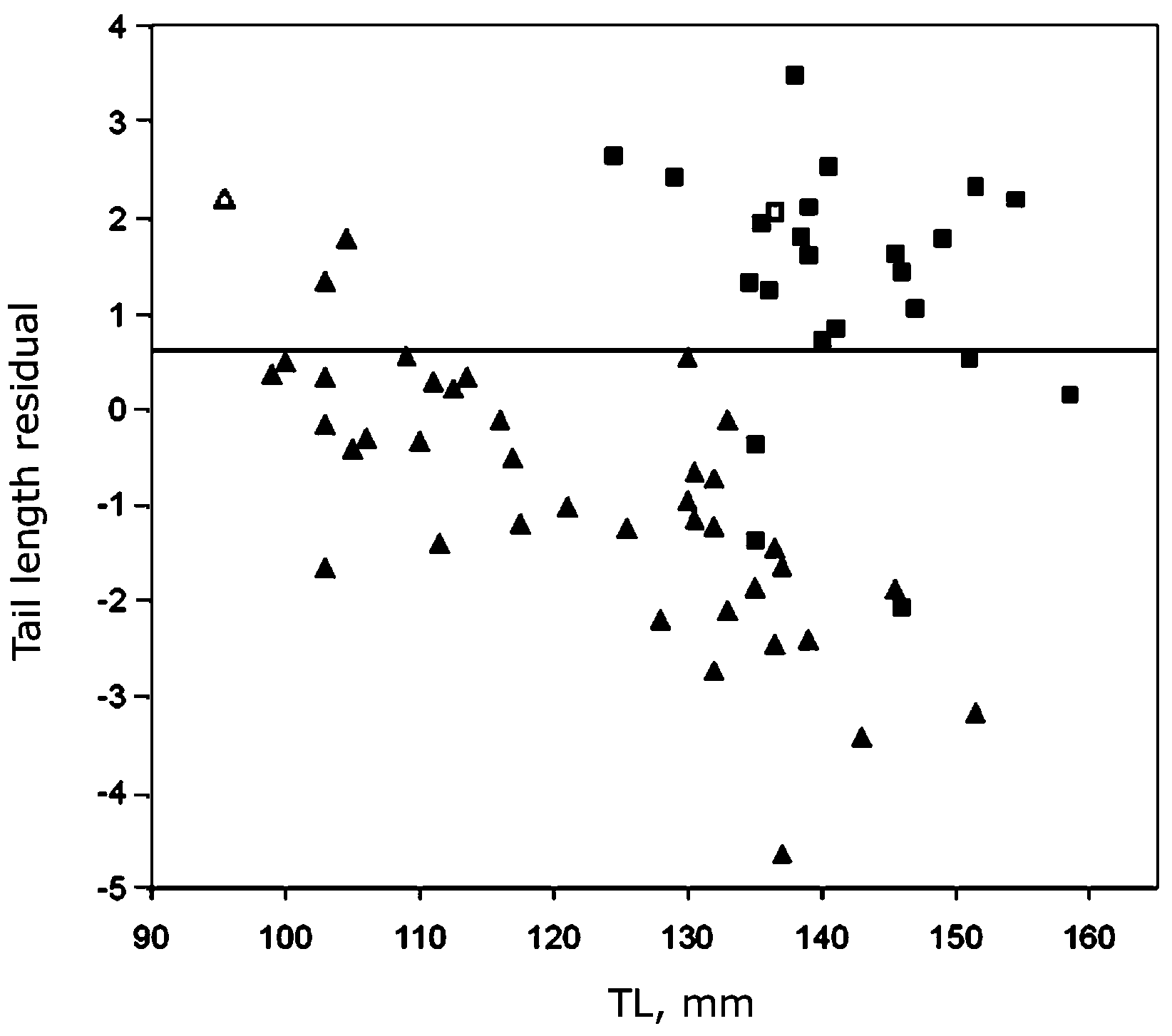 FIGURE 3. Tail length residuals of 26 adults of Eudontomyzon graecus sp. n. (․) and 40 adults of E. hellenicus (˔) against their total length. The open symbols represent the respective holotypes. The horizontal line in the graph is the line of maximum separation (88 %). Two pairs of E. graecus individuals lying above this line had identical coordinates; therefore, only 24 of 26 symbols are visible for this species. 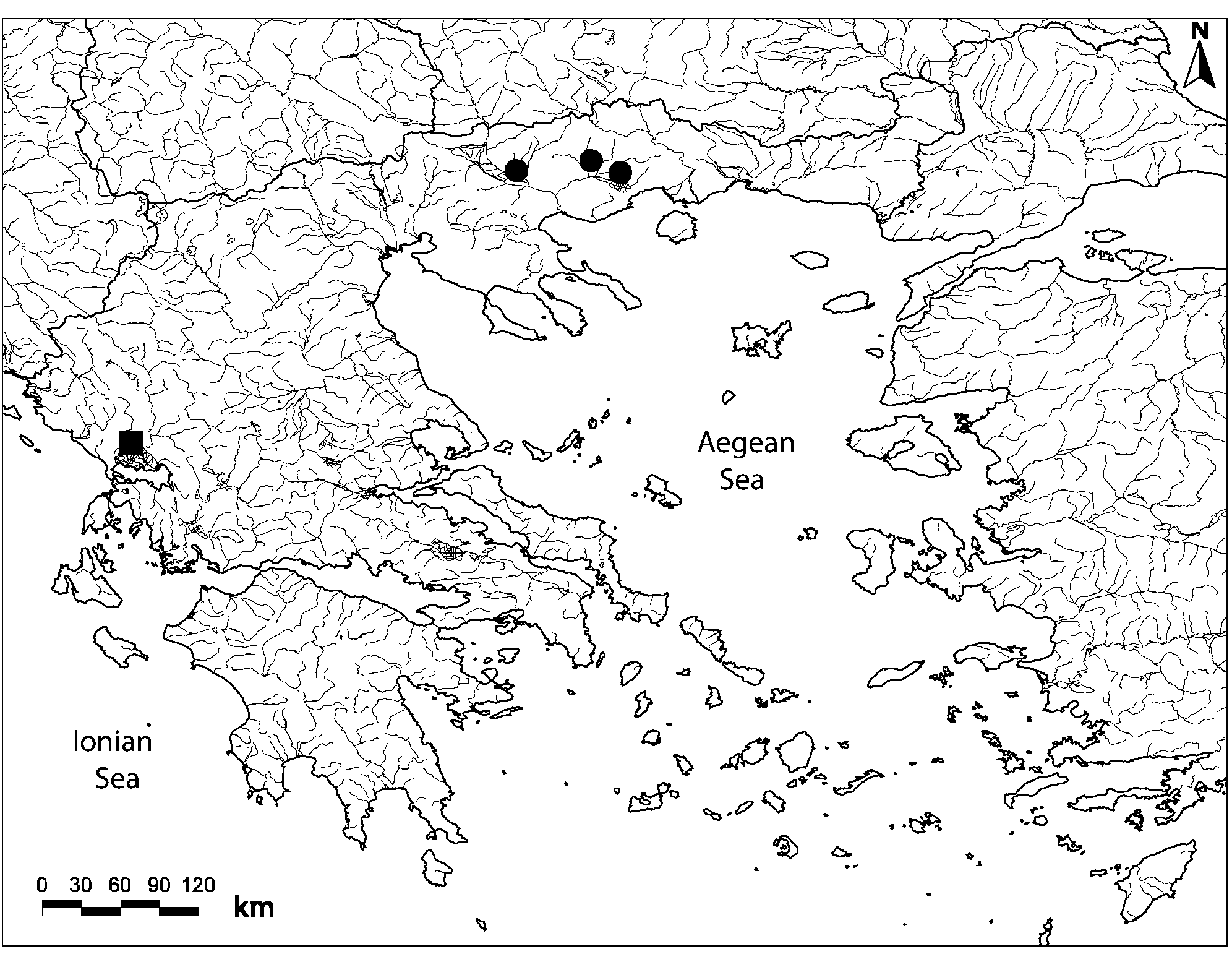