Etymology. Named after the distribution in French Guiana.

Differentiation. The strongly convex and bi-cornute head of this new species resembles C. ceratocephalus Gray, 1835  from Brazil. ♀♀ of C. guianensis  n. sp. however differ by the larger size, much more slender shape and relatively longer body segments as well as the considerably more slender legs, which lack the prominent lobes and teeth seen in C. ceratocephalus  . ♂♂ readily differ from all other known ♂♂ of the genus by the very convex and bi-cornute head and lack of a spatulate apical appendix of the poculum  .

Description. The ♀ HT in MNHN is fairly incomplete, lacking both hind legs and protarsi as well as most of the antennae. Great portions of abdominal sternum VII and the ventral surface of the subgenital plate are covered with a black greasy or tar-like mass, which does not allow proper description of the praeopercular organ. Careful removing of the contamination was attempted but has proven impossible without damaging the specimen.A piece of wood has been driven through the entire specimen during the process of preservation and projects from the head and apex of abdomen, unfortunately not allowing proper description of genital features such as the gonapophysis.

♀ ( Fig. 5View FIGURE 5). Medium-sized for the genus (body length incl. subgenital plate 174.0 mm), shape slender, granulation of thorax sparse if compared to most other species in the genus. Colour of the HT dull yellowish to reddish brown with most of the dorsal surface of metanotum and abdominal segment pale greyish to white with irregular reddish brown mottling. Abdominal sterna with two faint dark markings near posterior margin. Legs of same colour as body with the posterior lateral surfaces of the mesofemora pale greyish. Upper margins of the carinate cephalic protuberances black.

Head: Somewhat longer than wide with the vertex strongly raised, convex and bearing two elongate, laterally compressed ridge-like protuberances, which diverge and increase in height towards the posterior. Anterior and lateral portions of vertex with a few blunt black tubercles, genae with a few scattered granules. Frons with a wide but shallow impression. Eyes fairly large, sub-circular in outline and moderately projecting; each eye is 2x as long as the genae. Scapus strongly compressed dorsoventrally, almost 2x longer than wide and with the lateral margins gently rounded. Pedicellus sub-cylindrical and a little more than half the length of scapus.

Thorax: Pronotum roughly rectangular in shape, somewhat narrowed in anterior half, almost 1.5x longer than wide and distinctly narrower than head; transverse median sulcus short and shallow. Surface sparsely granulose. Mesothorax elongate, parallel-sided except for being slightly widened posteriorly and 4x longer than prothorax. Mesonotum sparsely granulose and with a fine longitudinal median carina. Mesopleurae and mesosternum sculptured like mesonotum, but both with a few somewhat enlarged tubercles; the sternum with a fine ridge along lateral margins. Metanotum a little more than 1/3 the length of mesonotum, sculpturing alike.

Legs: Profemora somewhat shorter than mesothorax; all carinae of fore legs moderately and uniformly deflexed. Mesofemora with a blunt teeth on both outer ventral carinae some 1/3 off the base. Mesotibiae strongly carinate with all carinae roundly deflexed apically. Mesobasitarsus about as long as following two tarsomeres combined; dorsal carina gently rounded.

Head: Generally as in ♀♀ but relatively more convex with the cephalic armature more prominently developed and more acute. A pair of prominent spiniform tubercles in front of the two large posterior protuberances and a further pair laterally. Eyes very large, projecting hemispherically and each eye is 1.2x as long as the genae. Antennae reaching to posterior margin of abdominal segment II. Scapus and pedicellus as in ♀♀.

Thorax: Pronotum as in ♀♀ but considerably shorter and narrower than head. Mesothorax elongate, slender and 4.3x longer than prothorax; mesonotum only with a very few scattered granules and a fine longitudinal median carina. Mesopleurae and mesosternum with a few irregularly dispersed tubercles; the sternum with a fairly distinct, acute longitudinal median carina. Metasternum like mesosternum but the median carina very indistinct. Tegmina strongly narrowed basally, rounded apically and with a blunt central protuberance. Alae reaching about half way along abdominal segment V.

Comments. The fact that this peculiar species is so far only known from the two type-specimens suggests it is particularly rare. Eggs unknown. 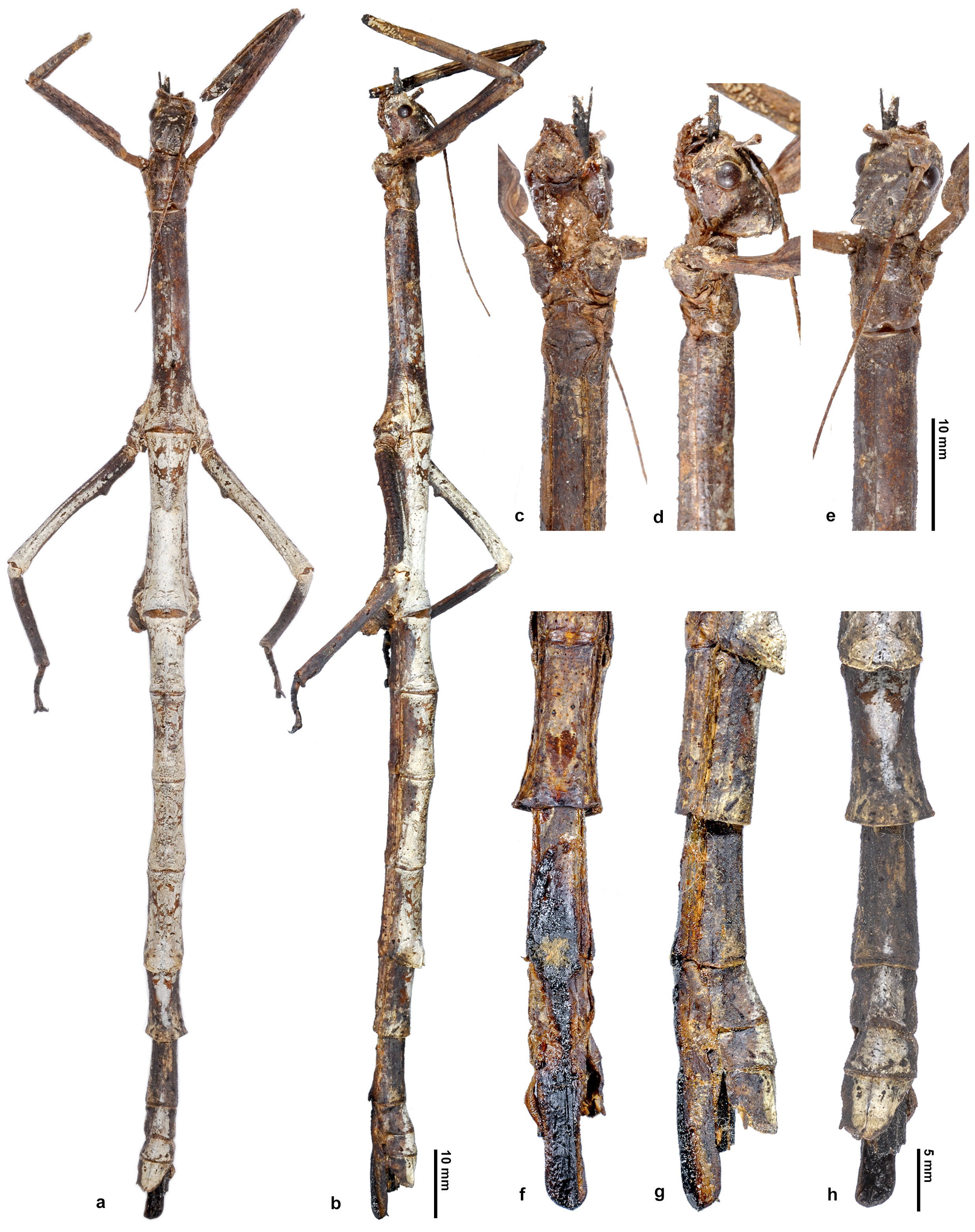 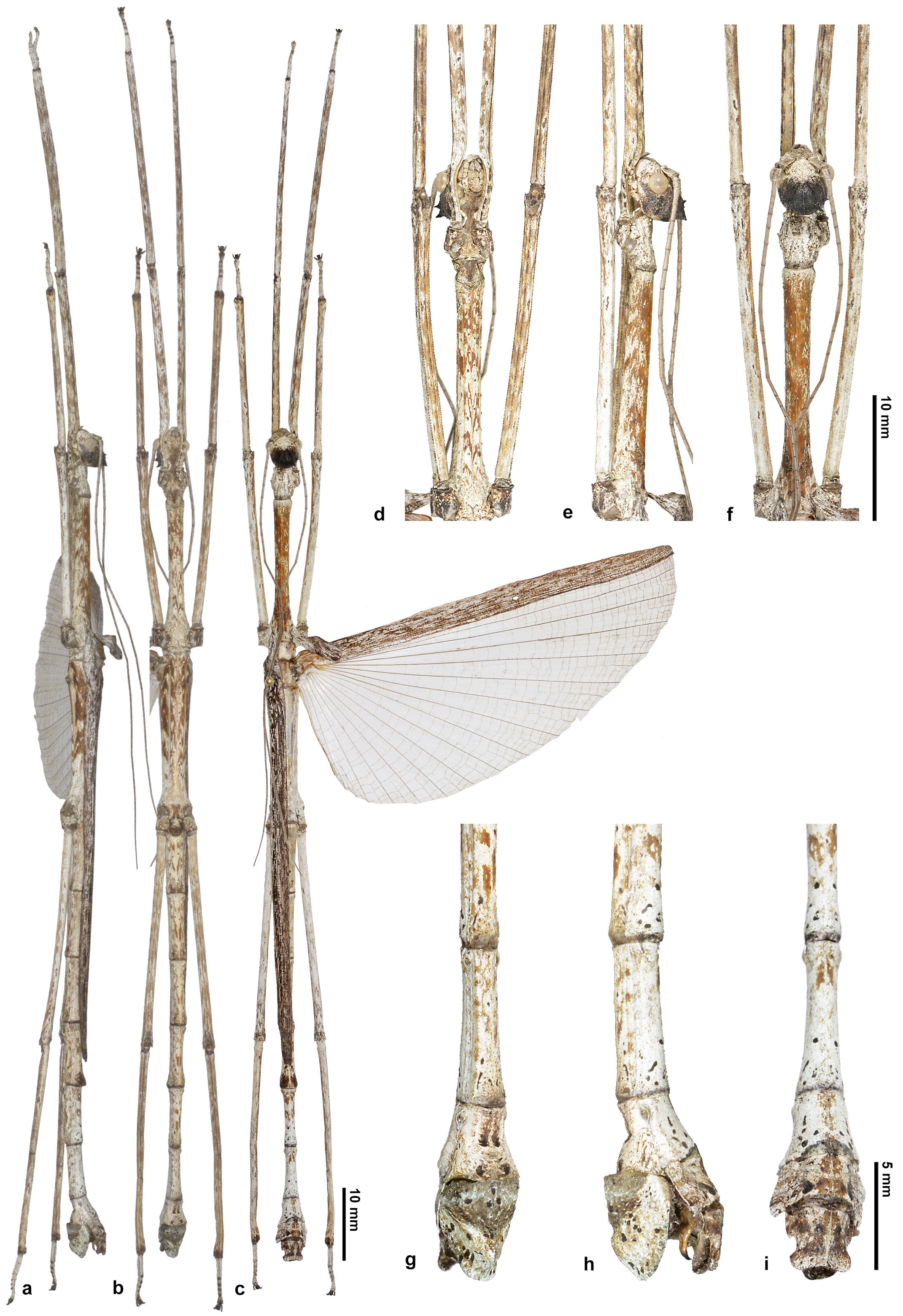