Description of paratype female. Head ( Fig. 17i View FIGURE 17 ). Black, excluding the yellow markings on labrum, base of mandibles, frons at eye margins, and spots between base of antennae and lateral ocelli. Antennae black. Compound eyes brown.

Legs dark grey, with a yellow stripe on each inner femur. Coxae and trochanters dark grey.

Abdomen ( Fig. 17g View FIGURE 17 ). Black, with lateral yellow stripes in two rows (lower one is shorter than upper one) across S1–6, but only a small anterior mark on S7 and no stripe on S8. S9 a posterolateral oval yellow spot. S10 and cerci black.

Ovipositor yellowish, but black on ventral valvula and stylus.

Remarks. Males of Euphaea sanguinea sp. nov. resemble those of E. ochracea , the geographic variability of which is complicated. Euphaea brunnea Selys, 1879 was described from specimens from Khasi Hills, Meghalay, NE India. Hämäläinen (2016, p. 26 note 41) discusses the uncertainty of the status of Euphaea brunnea and whether it qualifies as a subspecies of E. ochracea . Superficially, specimens from central and northern Thailand as well as northern Vietnam resemble brunnea better than ochracea (Hämäläinen in litt.). In view of the uncertainty of the validity of the taxon brunnea as a subspecies of Euphaea ochracea we refrain from the subspecific identification of the specimens of E. ochracea from Vietnam.

Earlier, Kosterin (2016) provided photos of damselflies identified as ‘ Euphaea ochracea ’ from Mondulkiri Prov., Cambodia, and pointed out that the five collected female specimens had "entirely black postclypeus and the pale marking on the anteclypeus broadly interrupted." This was erroneous wording. Proper wording should have been "entirely black clypeus and pale marking on the antefrons broadly interrupted" (Kosterin, pers. comm.), which is in line with our own material from Vietnam. He put “?ssp.” after the species name to indicate that those specimen could represent an undescribed subspecies, but refrained from nominating the Cambodian specimens as a new taxon. The abdomen pattern of distinctly red S2–6 displayed in the photos of Cambodian ‘ Euphaea ochracea’ is identical to that of E. sanguinea sp. nov., and the same holds true of the HW coloration ( Fig. 17f View FIGURE 17 in this paper and Fig. 25, p. 25 in Kosterin 2016). Therefore, it can be safely assumed that ‘ Euphaea ochracea’ from Cambodia in fact were E. sanguinea sp. nov.. According to M. Hämäläinen (in litt.) the specimens from Lam Dong (Bao Loc) and Dong Nai (Cat Tien National Park) recorded as Euphaea ochracea by Do & Dang (2007) also refer to E. sanguinea ; Hämäläinen himself has also collected specimens of Euphaea sanguinea from these provinces. 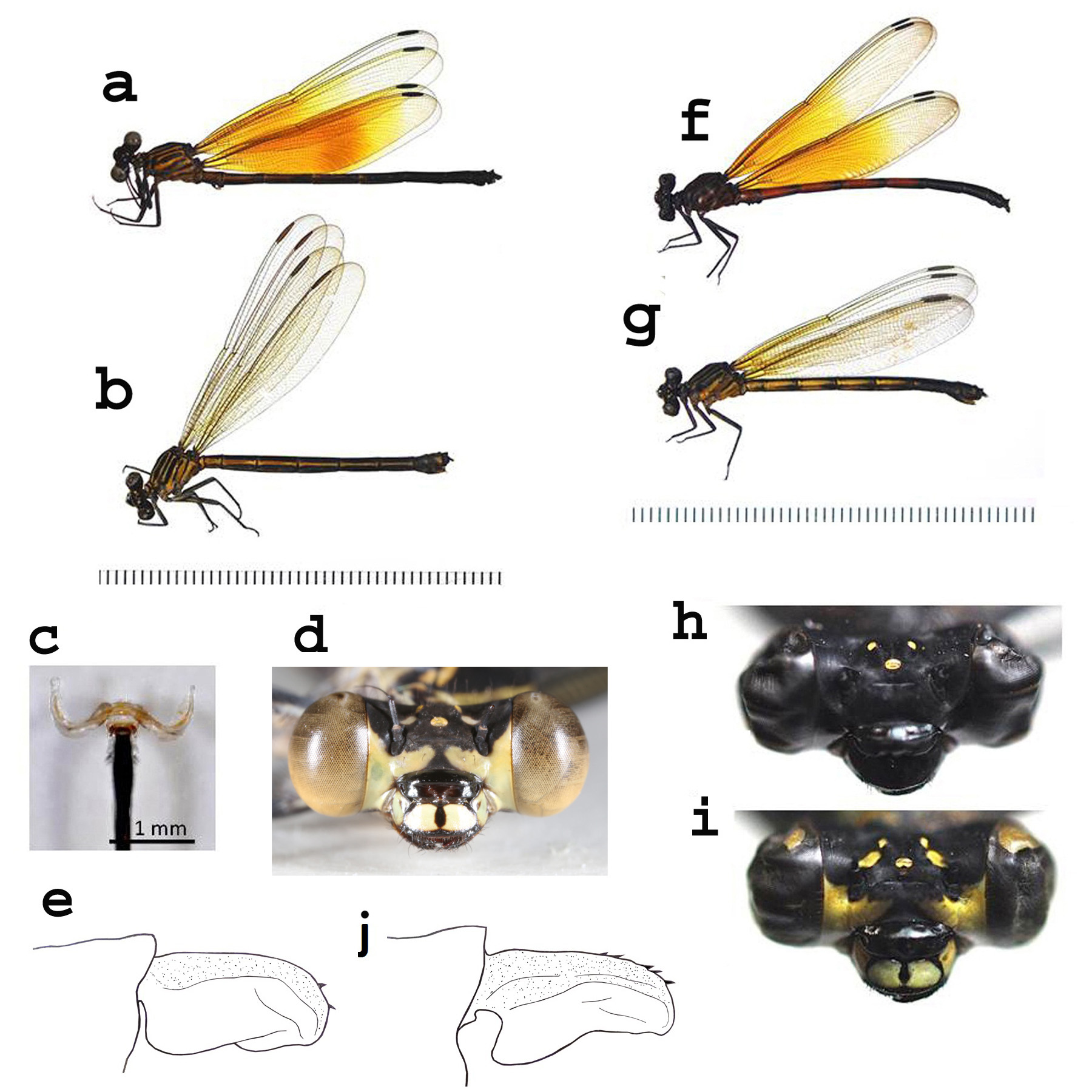