Identification.—This species is known only from three female specimens from the Osa Penninsula. Rhodobaenus patriciae  is similar to the southern South American R. tornowii (Bréthes)  in elytral color pattern ( Fig. 133View FIGURES 129 - 136) and in that the antennal scape is widened throughout most of its length ( Fig. 148View FIGURES 147 ­ 150); however, in R. patriciae  , the pronotal color pattern is different, the punctures of the femora are large, deep and dense, and the vestiture of the third tarsal articles has less extensive pilosity. The species may also be confused with R. bicinctus  but that species has a different elytral pattern, the rostrum is usually red, and the antennal scape is not expanded throughout its length, but only clavate at the apex.

Natural history.—Specimens were collected near sea level in the Osa Penninsula.

Derivation of specific name.—This species is named after Patricia Vaurie.

Comments.—This species was first recognized as new by Patricia Vaurie. She placed a determination label on one of the paratypes stating that it was near but not R. tornowii  .

Identification.—The paired setose patches on the dorsal surface of the female rostrum divided medially by a distinct fine carina ( Fig. 151View FIGURES 151 ­ 154), and the unique sculpturing of the pronotum and elytra ( Figs. 135­136View FIGURES 129 - 136) immediately characterize this odd, perhaps flightless species. Whereas R. howelli  also has the dorsal surface of the female rostrum setose, in R. tenorio  , the setosity is shorter, with each hair broader and scale­like, and the extent of the pilosity is limited to a smaller patch extended from immediately above the point of antennal insertion to the midlength of the rostrum ( Fig. 151View FIGURES 151 ­ 154). The patch is also divided medially by a distinct, fine, sharp carina. The pronotum and elytra are scupltured unlike any other Rhodobaenus  . The pronotum has a subbasal transverse impression (as do many Rhodobaenus  ) but this impression is extended anteriorly for a short distance on either side of the broadly elevated midline. The elytra has the scutellar region broadly impressed and also has a distinct oblique impression extended from the humerus to interval 2 at about the apical one­third. The pygidium is markedly, acutely tumescent apically ( Fig. 154View FIGURES 151 ­ 154) and the tarsi have the venter of the claw bearing articles flat (as in R. howelli  ). The short elytra with somewhat rounded humeri ( Fig. 135View FIGURES 129 - 136) indicates species is likely flightless.

Derivation of specific name.—This species is named after INBio parataxonomist Roger Gonzalez Tenorio  for his diligence (and success) in finding new species of weevils. 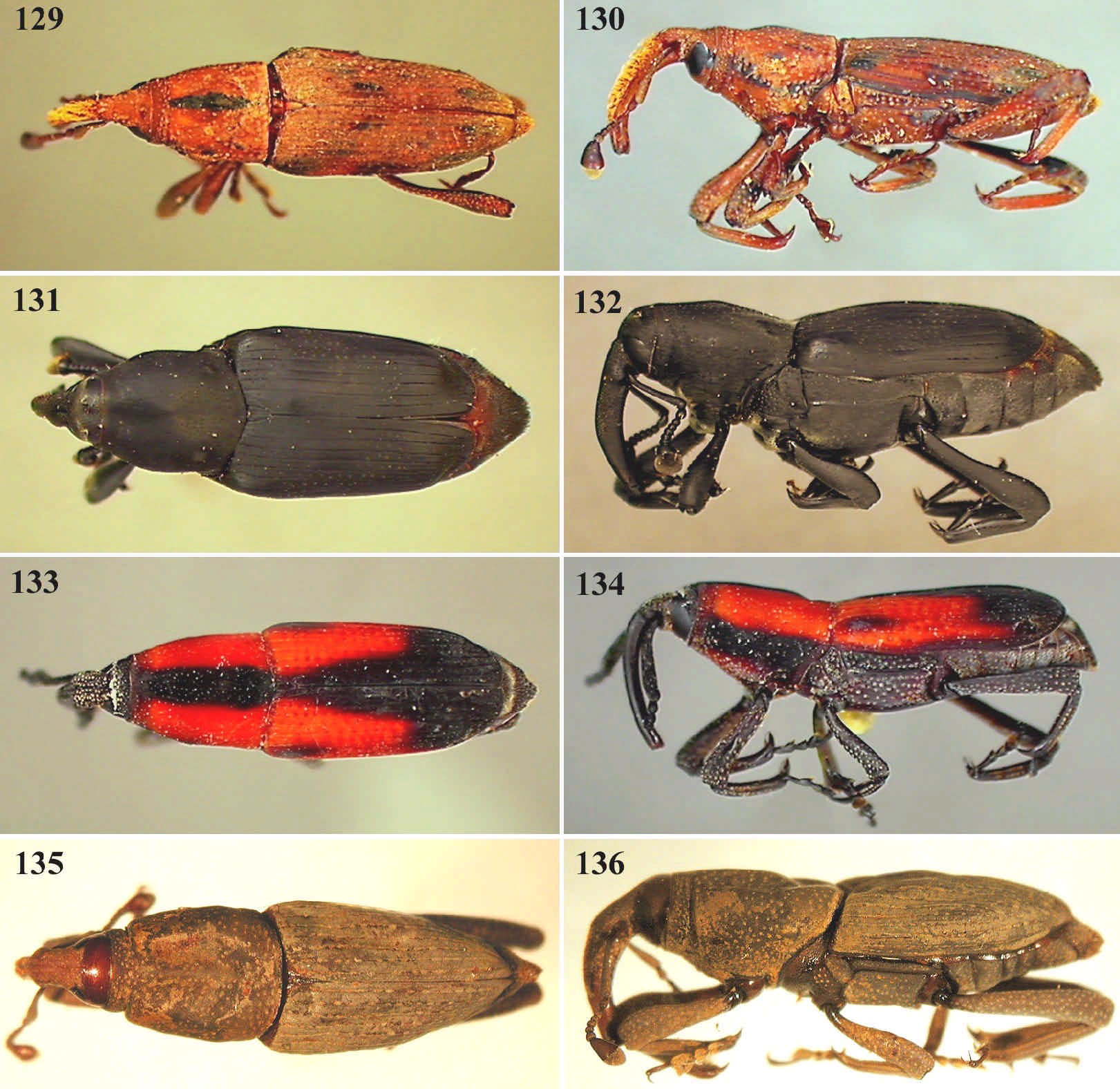