Identification.—This species is difficult to characterize although the elytral color pattern, with a single red broad transverse median band, and in some specimens, a red subapical irregular spot and reddish humeri, is distinctive ( Figs. 101­102View FIGURES 101 - 108). The pronotum is marked with red medially at the base and in two variously developed oblique lateral lines. In its color pattern, this species resembles some specimens of M. dasyurus  but the pattern of setae on the pygidium is different and males do not have the long hairs on the inner margins of the front tibiae found in the latter species. In contrast to M. dasyurus  , the tibiae have only small, stout, spine­like setae along the inner margins, giving an overall “comblike” or pectinate appearance ( Fig. 112View FIGURES 109 ­ 114), and the pygidium has two apical tufts of setae ( Fig. 113View FIGURES 109 ­ 114). The hind and middle tibiae are also slightly inwardly expanded subbasally in the males, but not as distinctly as they are in M. hebetatus  . The pronotum is distinctly impressed subbasally with the punctures deeper and denser in this impressed area. In males, there is a very slight ventral swelling on the rostrum at the midlength ( Fig. 109View FIGURES 109 ­ 114), a feature otherwise seen only in M. sanguinipes  and M. tibialis  , but in these latter species the swelling is much more angulate and acute.

Description.— Male, length, 11.9­14.3 mm; width, 5.1­5.5 mm. Female, length, 10.4­ 12.8 mm; width, 5.0­ 5.4 mm. Color black with red; pronotal disc red, or black with red laterally in variously developed oblique longitudinal stripe and at middle of base; elytra black with red variously in a broad complete median band (on some specimens band abbreviated laterally to a large oblique spot extended from intervals 2 to 8), on humeral angle and subapically on intervals 3 to 5. Venter black, some specimens with lateral portions of metasternum, middle of ventrite 1, and metepisternum variously infused with red.

Variation.—There is some variation in the color pattern of this species. In all specimens there is a single red broad transverse median band, but in some specimens, there is also a red subapical irregular spot evident from intevals 3­5, and in these same specimens, the humeri also are reddish. In all specimens but one, the pronotum is black with red markings medially at the base and in two variously developed oblique, anteriorly convergent, lateral lines. In this exceptional specimen the pronotum is entirely red.

Sexual dimorphism.—In males, the rostrum is more slightly robust in lateral view and possesses a slight ventral swelling at about the midlength. Also, the inner margins of the middle and hind tibiae are slightly inwardly expanded in males, not so expanded in females.

Derivation of specific name.— Through their support of the Nature Discovery Fund at the Canadian Museum of Nature, this species is named after Richard deBoer of Manotick, Ontario, Canada as a gift from his wife Coralie Lalonde. 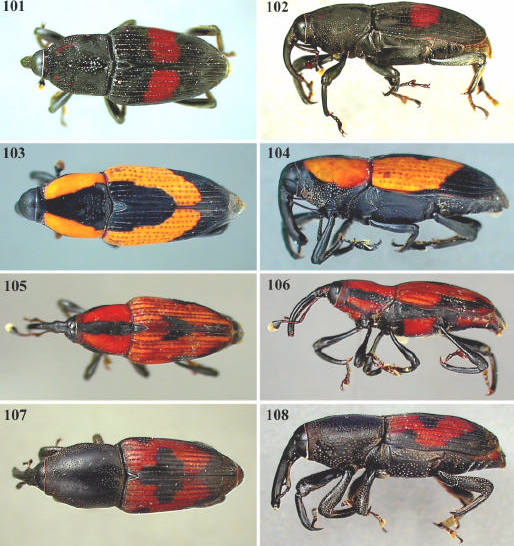