Identification.—This species is very easily recognized by the distinct and unique form of the elytral strial punctures which are paired, filled with dense fine pale yellow pilosity, and extended about one­third of the way into the elytral intervals ( Figs. 86­87View FIGURES 86 - 89). In the form of the punctures, this species approaches Sphenophorus cicatristriatus Fahråeus  , although the punctures are not as large or as markedly developed as in that species. These punctures may be lacking or less dense in a variously developed median band giving the general appearance of a vague black transverse vitta ( Fig. 86View FIGURES 86 - 89). The entire body, with the exception of the head and rostrum, median portion of the metasternum and ventrites 1 to 4, is deeply, regularly punctate, each puncture filled with the same dense fine pale yellow pilosity. Most of the specimens seen are totally black whereas a few possess various amounts of red on the pronotum and the elytra. In other characters this species resembles M. nudiventris Champion  although in that species the pronotal disc is much less densely punctate and the punctures are not filled with pilosity as they are in M. leopardinus  .

Sexual dimorphism.—Sexual dimorphism in M. leopardinus  is evident in the form of the middle of ventrite 1 which is distinctly concave and subtuberculate laterally immediately adjacent to this concavity in males. In females, ventrite 1 is flat. Also, the apex of ventrite 5 is slightly more deeply impressed in males than in females.

Variation.—There is extensive variation in the pattern of the characteristic large elytral punctures. In some specimens, the punctures are more or less uniformly distributed over the elytra; however, in some specimens they are lacking, or sparser, in a broad median band, giving the impression of a median black vitta to the naked eye. Most of the specimens examined are completely black in color but four individuals have the lateral portions of the pronotal disc reddish and eight specimens have various amounts of red in one or two irregular transverse series of spots on the elytra.

Derivation of specific name.—This species is named after the form of the pale yellow pilose punctures which give specimens a finely spotted appearance.

Comments.—This species is quite common in the collections at INBio, but is represented by only one other specimen in the other collections examined. 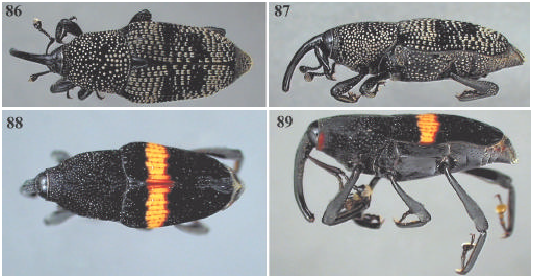