Characteristics. The examined material fits well with the original description provided by Massin & Hendrickx (2010) in the following aspects: cylindrical body almost uniform in width throughout ( Figure 2A, I View FIGURE 2 , II). Body length from 28 to 290 mm, body wall thickening in organisms larger than 100 mm. Mouth ventral and anus terminal. Up to 20 shield-shaped tentacles arranged in a unique circle, each with 6‒9 distal digitation ( Figure 2A View FIGURE 2 , III). Four groups of long papillae towards anterior end and above crown of tentacles, arranged as follow: two superior groups, with a variable number of papillae (2‒4 in each group, more frequently 3), and 2 lateral groups, usually with 2 papillae each ( Figure 2A View FIGURE 2 , III). Dorsally papillae thin, hook-shaped, with pointed end covering entire dorsal surface; in large organisms they follow an arrangement approximately of 6 rows along the body. Ventral ambulacral feet wide, rounded towards posterior end, covering entire ventral region, generally shorter and less prominent towards posterior end of body. Distal end of feet with supporting sucking disk. Anus surrounded by 5 groups of small and tapering papillae, frequently 3 per group ( Figure 2A View FIGURE 2 , IV).

Calcareous ring of five radial and five interradials plates, lacking posterior processes ( Figure 2A, V View FIGURE 2 ). Plates vary in robustness depending on their position in the calcareous ring, but are similar in shape between dorsal and ventral plates. Two radial and three interradial dorsal plates, taller and wider than their complementary ventral plates that are low and outstretched. Radial plates slightly wider in middle region than towards ends, at anterior and posterior margins with a center short slit pointing towards the center of the piece and this generates two short divisions in each of the margins. Interradial dorsal plates semi-square, at anterior parts gently curved and posterior margins with a marked slit pointing towards the center of the piece; in ventral region elongated and at posterior margins lightly concave.

Ossicles in body wall tables of two kinds: small tables (60‒120 µm across) formed by a base of four short and thin arms generally with or without perforated ends, arms sometimes connected through a circular margin, central pillar long (50‒230 µm high), smooth and widened at the base, ending in a crown-like projection formed by 3‒4 short branches joined together ( Figure 3A, I, 3B, I View FIGURE 3 ). Very large tables (100‒950 µm across) formed by a base of long widening arms, perforated and branched towards the outer end, similar to a racket, 3‒5 arms and 4‒11 holes per arm, central pillar (up to 170 µm high), almost as long as each of the arms ( Figure 3A View FIGURE 3 , II, 3B, II). Two forms of tables present in dorsal and ventral regions, less frequently in ambulacral feet. Huge, massive and smooth rods (90‒700 µm long), more slender and slightly curved rods (100‒750 µm long) and club shaped ossicles (100‒600 µm long) present in ventral and lateral ambulacral feet ( Figure 3C, I View FIGURE 3 ). Perforated end plate of the ventral and lateral tube feet with holes and margin irregular (up to 450 µm across) ( Figure 3C View FIGURE 3 , II). Dorsal and tentacular papillae with cross-shaped ossicles, similar to tables of the body wall, and huge and smooth rods (130‒1050 µm long) ( Figure 3A View FIGURE 3 , III). Tentacles with long, smooth or spiny curved rods, with or without perforated ends (130‒880 µm long) ( Figure 2B View FIGURE 2 ).

Remarks. In all specimens of TALUD XVI-B were observed huge, massive and smooth rods and club shaped ossicles in the ventral and lateral ambulacral feet. According to Massin & Hendrickx (2010) this is a feature that separates to S. virgulasolida from other species of Synallactes . In the original description of the species, the authors have also mentioned “this is a good discriminant character which has not be observed in other Synallactes ".

Variation was observed in cross-shaped ossicles protruding outside in the dorsal and tentacular papillae, mentioned by Massin & Hendrickx (2010), these were presented in smaller quantity with increasing size of the animals. These forms are arranged along the entire papilla above a mesh made of rod-shaped spicules. In addition, we observed a reduction in number of tables of the body wall and of dorsal papillae with animals growth. All types of spicules, of different sizes, were present in almost all specimens of different sizes. Consequently, there seems to be no relationship between size of the ossicles and size of the animals ( Table 2). In one case, however, very large spicules were present in three organisms of an intermediate size ( TALUD XVI-B, St. 5, body length 52, 55 and 62 mm); these corresponded to body wall tables of four arms, for which some ossicles had an approximate width of 950 µm. Although these forms clearly stood out in their dimensions, we are sure that the specimens belong to S. virgulasolida due to their external characteristics and the presence of massive, smooth rods and club-shaped ossicles in the ventral and lateral ambulacral feet just like mentions in the original description. Changes in the ossicles during holothurians growth have been reported in very few species, mostly from shallow waters (Solís- Marín, 2003). These changes include modification in the forms and amount of the spicules ( Mitsukuri, 1897; Thandar, 1987; Massin, 1994; Cutress, 1996).

On the other hand, the calcareous ring did not present a transformation that could be related to the growth of the animal. In at least five specimens of different sizes ( TALUD XVI-B, St. 6, body length 270, 245, 175, 165 and 68 mm) in which this structure was observed, there was no reduction or reabsorption of its pieces. Therefore, it is likely that the ring does not disappear in the final growing stages. Differences in the forms of the dorsal and ventral ring pieces were observed. Variation in shape between the pieces of the calcareous ring has been noted in some Synallactidae species ( Solís-Marín, 2003, 2009).

Compared with the original description, the specimens that were examined herein exhibited almost exactly the characteristics observed by Massin & Hendrickx (2010) in the original material (three specimens of 50, 60 and 85 mm), although the new material is of larger size (i.e., 165‒290 mm). The line of ambulacral feet between the bivium and the trivium was not constantly observed in the examined material. However, we believe that this variation does not depend on the age of the organisms, but is rather related to ease with which the ambulacral feet contract. Accordingly, it is a characteristic that can be affected by the process of fixation, as reported for the arrangement of the crown tentacles.

Contrary to what the authors mentioned in the original description, i.e., that specimens of larger sizes may have lost their calcareous ring, we have observed this structure in specimens with body length between 163 and 270 mm. The shape of the radial and interradial pieces was conserved and there was no changes due to a reduction processes. In the same way, the reduction in numbers of spicules with advancing the age (or increasing the size) was limited to body wall tables and tentacular papillae tables.

Density of organisms. Density estimated for S. virgulasolida in the seven sampling stations varied considerably, from a minimum of 2.63 orgs/ha (TALUDXVI-B, St. 18) to a maximum of 170.32 orgs/ha ( TALUD III, St. 14-A). The highest density values were found in the 1004‒1020 m depth range, while the lowest values corresponded to a depth range of 710‒785 m ( Table 1).

Distribution. Previous to this study, S. virgulasolida was known only from the type locality, off SE Baja California (25°24'26"N, 110°37'36"W), in the Gulf of California ( Figure 1 View FIGURE 1 ) ( Massin & Hendrickx, 2010). The material examined herein includes an additional record within the Gulf of California, off the east coast of the peninsula, and a large series of records off the west coast of the Baja California Peninsula where it had not been reported previously. The data obtained from the Benthic Invertebrates Collection at SIO further increase the distribution range of this species, from southern California (32°59'N) to off Chile (18°40'30"S), equivalent to a range of almost 52° of latitude. Including the data available in the SIO collection, the general bathymetric range of S. virgulasolida is set at 710‒1300, with a large majority of records between ca 710 and 1102 m depth. 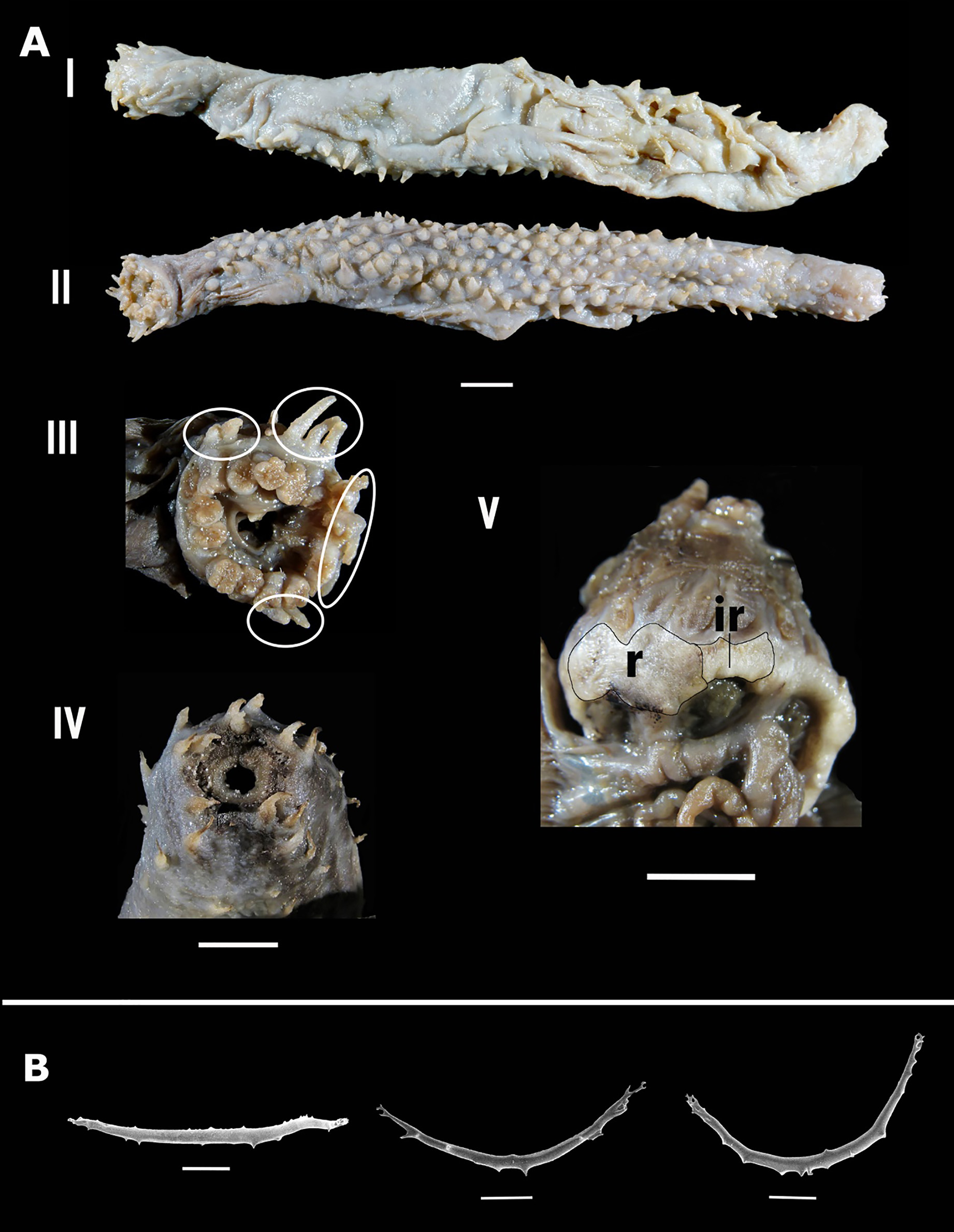 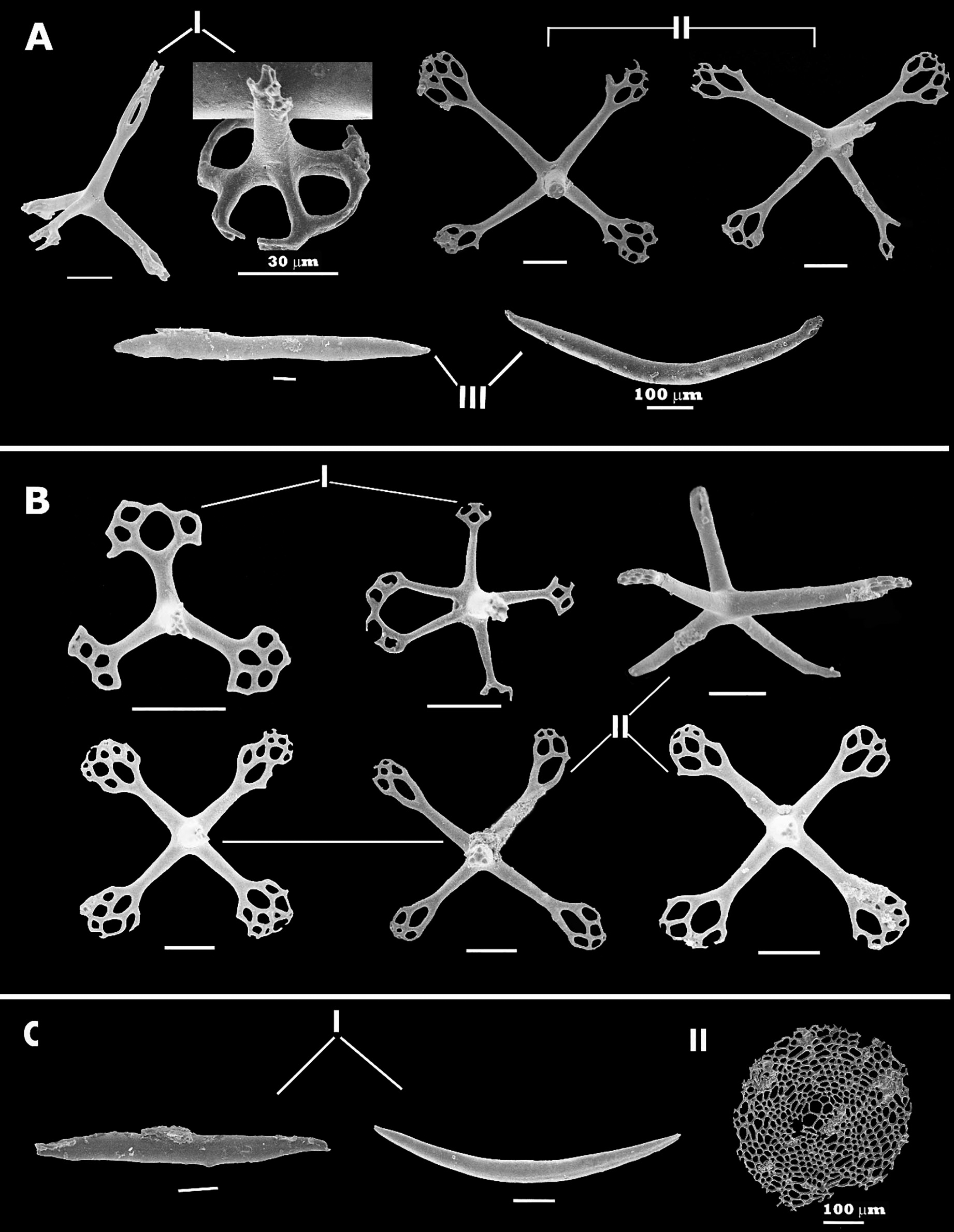