Allotype. Female, length 11.2 mm, greatest width 7.5 mm. Differing from male as follows: clypeus with anterior carina on each side bowed upward to midline, forming sharp, obtuse angle; from obtuse angle carina then extending posteriorly along midline to median tubercle; this tubercle only slightly anterior to lateral tubercle on each side, tubercles of equal size; posterior carina on each side only slightly bowed and elevated to median tubercle, length of median and posterior carinae approximately equal; vertex slightly more granulate; pronotum with tubercle on anterior median marginal bead less elevated; inner pronotal carina with obtuse angle lower, less rounded, separated by 0.8 mm less than in holotype (function of size); concavity reduced in width and depth; elytron with no indication of elevated intervals; foretibia with basal sixth tooth minute.

Remarks. The four male paratypes range from 10.5 to 11.3 mm in length and from 6.8 to 7.5 mm in greatest width. The single female paratype is 11.1 mm in length and 7.5 mm in greatest width. In two males the outer pronotal carina on each side between the inner carina and the posterior angle is vaguely indicated by an indistinct elevation or small glabrous area. In the smallest specimen the pronotal cavity is shallower than the others and the anterior angle of the inner carina on each side is abruptly obtuse. One small male has only five teeth evident on the foretibia. The apical lobes of the male genitalia vary slightly in size and shape, but all have the outer angle sharply acute. Other variation is minimal.

The single female from Corrientes, Argentina, is almost certainly N. antennatus   , but because of the distance between Corrientes and the type locality, a male is needed to verify its identity. Also, there is the possibility that the specimen is mislabeled.

Neoathyreus antennatus   and the related species, N. goyasensis (Boucomont)   , are, as far as I know, the only two described species in the genus that have the antennal club greatly thickened and oval in both sexes. In N. goyasensis   the inner pronotal carina posterior to the anterior angle of the carina is interrupted for a short distance; it is complete in N. antennatus   . Although the male genitalia of the two species differ mainly in the shape of the inner part of the apical lobes, the known range of the two species will separate them. The species, N. acutus Howden   , which is partly sympatric with N. antennatus   and superficially resembles it, lacks the thickened antennal club and has the outer pronotal carinae distinct. No other described species is likely to be confused with N. antennatus   .

Etymology. The name “ antennatus   ” refers to the unusual antennal club. 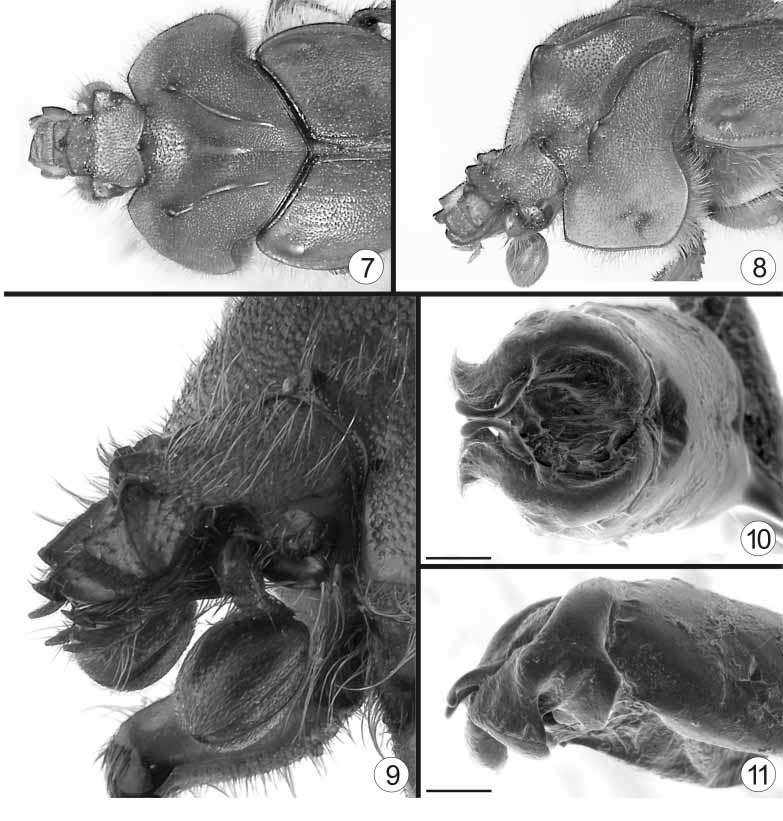