Distribution and Habitat — In the protologue of Solanum carolinense var. carolinense, Linnaeus (1753) writes “ Habitat in Carolina ,” but a more precise geographic origin of the lectotype specimen cannot be determined. While it is likely that it was collected in the southeastern United States in the vicinity of the Carolinas, it is possible that it was collected from a plant grown in Europe from seed collected from North America (S. Knapp, pers. comm.). Furthermore, the native distribution of S. carolinense var. carolinense prior to European settlement in North America is not known with much precision at a local scale because of its weediness and ability to disperse and colonize areas outside of its native range. Based on the location data of ca. 500 herbarium specimens examined for this work, its inferred native distribution extends from central Florida north to New York and Massachusetts and west to Texas, Oklahoma, Kansas, and Nebraska to about the 97th meridian west ( Fig. 5 View FIG ). The species reaches Canada only in the southernmost areas

of Ontario and Quebec Provinces ( Bassett and Munro 1986; Cayouette 1972), and except for a single unverified report of the species in Mexico from the states of Sonora, Tamaulipas, and Nuevo Leon ( Eberwein and Litscher 2007), we have not seen any additional evidence suggesting it occurred there as part of its native range. Recent floristic treatments and online databases record occasional occurrences in the western United States (Colorado, New Mexico, Arizona, Utah, Idaho, Washington, Oregon, and California) where some states have classified the species as a noxious weed (e.g. Arizona, California, and Nevada [ USDA 2014]).

Solanum carolinense var. pohlianum was described from a Pohl collection that was likely made near the Brazilian port city of Salvador from what was an adventive population established by an accidental introduction to the area (L. Giacomin pers. comm.). There is no evidence that S. carolinense has been collected in Brazil since the time of Pohl’ s collections ( Stehmann et al. 2013). In addition, we have not seen any specimens or reports of the species from other locations in Central or South America or Africa.

In some areas outside of its native range (e.g. China), Solanum carolinense var. carolinense occurs as a harmless exotic species, but in other areas the species is a serious pest (e.g. Italy, Japan). Apparently it is inadvertently dispersed by humans over long distances through shipments of soybeans or livestock fodder that are contaminated with seeds ( Ouren 1987; Park et al. 2001; Follak and Strauss 2010). New introductions to temperate and subtropical regions around the world are expected to continue as long as agricultural crops are exported abroad from the eastern and southeastern United States.

Solanum carolinense var. carolinense grows in a wide variety of conditions, from dry, well drained soils to seasonally inundated swales, fields, and river banks, from deep shade to full sun, and in sands, clays, loams, gravels, serpentine and calcareous outcrops, and the margins of coal mine and dredge spoils. It grows in various plant communities including prairies, deciduous woodlands, swamps, and pine forests, and in disturbed areas such as roadsides, grazed and mowed pastures, ditches, cultivated fields, urban waste areas, and utility and railroad rights of way. It has been collected from cultivated fields of peanuts, wheat, maize, cotton, tomato, potato, alfalfa, green beans, and soybeans. The species grows at elevations from 0–850(–1200) m.

Phenology — In North America, the species flowers between May and October and fruits between June and November.

Conservation Status — The calculations for the extent of occurrence (ca. 3 × 10 6 km 2) and area of occupancy (7,328 km 2) for Solanum carolinense var. carolinense were based on its estimated native range in North America ( Fig. 5 View FIG ). Because it is invasive and has the potential to expand its population size when introduced to suitable habitat outside of its native range, it is assigned a preliminary conservation status of “least concern” ( LC).

Etymology — The specific epithet means “from the Carolinas” in the United States, the presumed type locality of the species.

Some accounts have reported that the dried fruits and roots have been used as a sedative, antispasmodic, diuretic, and aphrodisiac, and that poultices, ointments, and teas made from the fruits or leaves have been used for the treatment of epilepsy, sore throat, toothache, contact dermatitis, worms, and mange in dogs ( Grieve 1974; Foster and Duke 1990; Yasuyuki et al. 2010). However, all parts of the plant are considered to be poisonous, and the glycoalkaloids contained in the mature fruits are known to be toxic to livestock (cattle, sheep) and humans ( Muenscher 1951; Hulbert and Oehme 1963; Hardin and Arena, 1969; Hamilton 1980; Turner and Szczawinski 1991; Wink and Van Wyk 2008). Cipollini and Levey (1997) reported that mature fruits contained 10–30 mg /g dry mass of glycoalkaloids, primarily α- solasonine and α- solamargine. A case of fatal human poisoning was documented in 1963 when a 6-yr-old boy in Pennsylvania died after eating the fruit of S. carolinense var. carolinense ( Kingsbury 1964) .

Ecology — As a weedy species, Solanum carolinense var. carolinense exhibits several attributes that make it a highly competitive and invasive weed: it colonizes early successional or disturbed habitats, produces many seeds per fruit, grows rapidly, reproduces vegetatively, resists mechanical methods of control, has generalized pollinators, and can grow in a variety of biotic and abiotic conditions (e.g. Kolar and Lodge 2001). These same characteristics that contribute to the invasiveness of S. carolinense var. carolinense also make it difficult to control. Human disturbance such as plowing serve to open up new habitat for its dispersal and establishment. It is capable of producing ca. 40–170 seeds per fruit, with a single plant producing up to ca. 5,000 seeds that may be dispersed by birds and mammals ( Martin et al. 1951; Gunn and Gaffney 1974; Solomon and McNaughton 1979; Cipollini and Levey 1997).

As with other weedy species, Solanum carolinense var. carolinense is pollinated by a variety of generalist insects. The flowers are odorless and without nectar, and provide pollen as a reward ( Solomon 1987). In North America, the species has been observed to be buzz pollinated by a variety of non-specialist bees, including sweat bees (Lasioglossum spp.), bumblebees (Bombus spp.) carpenter bees (Xylocopa spp.), and mining bees (Andrena spp.; Hardin et al. 1972; Quesada-Aguilar et al. 2008).

In its native range and in many introduced areas, Solanum carolinense var. carolinense is extremely difficult to control in cultivated areas and pastures once established. The magnitude of the economic impact to agriculture is difficult to estimate, but given its wide distribution in the United States and locations abroad, the costs associated with control of the species, crop losses, contaminated harvests and fodder, and reduced availability of pastureland are potentially enormous (e.g. Follak and Strauss 2010). In North America, some crop yields have been decreased up to 60% by its presence, and the quality of pastures can be severely diminished ( Gorrell et al. 1981; Hackett et al. 1987; Pimentel et al. 2000).

Control of the species using mechanical methods or single herbicide applications is usually not effective ( Ilnicki et al. 1962; Nichols et al. 1992). Plants that are mowed during the first half of the growing season re-emerge vigorously, and tilling causes vegetative reproduction from root fragments, which often increases the severity of the infestation ( Furrer and Fertig 1960; Takematsu et al. 1979; Gorrell et al. 1981; Wehtje et al. 1987). Intensive herbicide applications with certain mixtures and treatments are somewhat effective (e.g. Whaley and Vangessel 2002; Armel et al. 2003; Beeler et al. 2004), but the use of biological control agents carries considerable risk given the relatively close phylogenetic relationship to other solanaceous crops such as tomato, potato, and eggplant ( Nichols et al. 1992).

Reproductive Biology — Solanum carolinense var. carolinense is a weakly andromonoecious species with a system of selfincompatibility, and several studies have investigated the ecology, evolution, and biochemistry of its reproductive biology. The developmentally terminal and indeterminate inflorescence develops acropetally and produces variable numbers of hermaphroditic flowers at the proximal end and staminate flowers at the distal end. Studies of andromonoecy in the species have shown that sex expression in the inflorescence (i.e. the ratio of hermaphroditic:staminate flowers) can be influenced by various environmental and ecological factors ( Solomon 1985; Steven et al. 1999; Wise and Cummins 2006; Wise et al. 2008; Wise and Hébert 2010), whereas others have found evidence that sex expression is a heritable trait ( Elle 1998, 1999; Elle and Meagher 2000). Other research has shown that the androecium of both hermaphroditic and staminate flowers is fully developed and produces fertile pollen ( Solomon 1985) and that the production of pollen in staminate flowers functions as a reward to attract pollinators as well as a source of pollen for other flowers ( Solomon 1987; Connolly and Anderson 2003; but see Vallejo-Marín and Rausher 2007).

S. carolinense var. carolinense . White- and blue-flowered plants are commonly found in mixed populations across the entire range of S. carolinense , and we do not consider corolla color to be a useful character in delimiting an infraspecific taxon. In the protologue of S. carolinense var. albiflorum, Kuntze did not cite a type specimen. We have chosen the specimen C. E. O. Kuntze 2768 ( NY) as the lectotype, which is from Kuntze’ s herbarium and is annotated with the name of the taxon in his handwriting. Dunal (1852) makes reference to a Pohl and Sendtner collection from Brazil in the protologue of S. carolinense var. pohlianum . We have located a single specimen collected in Brazil by Pohl, but because it is not possible to determine with certainty whether or not it was the same sheet Dunal used in his description, we have designated the specimen J. B. E. Pohl s. n. (M–M0171734) as a lectotype. 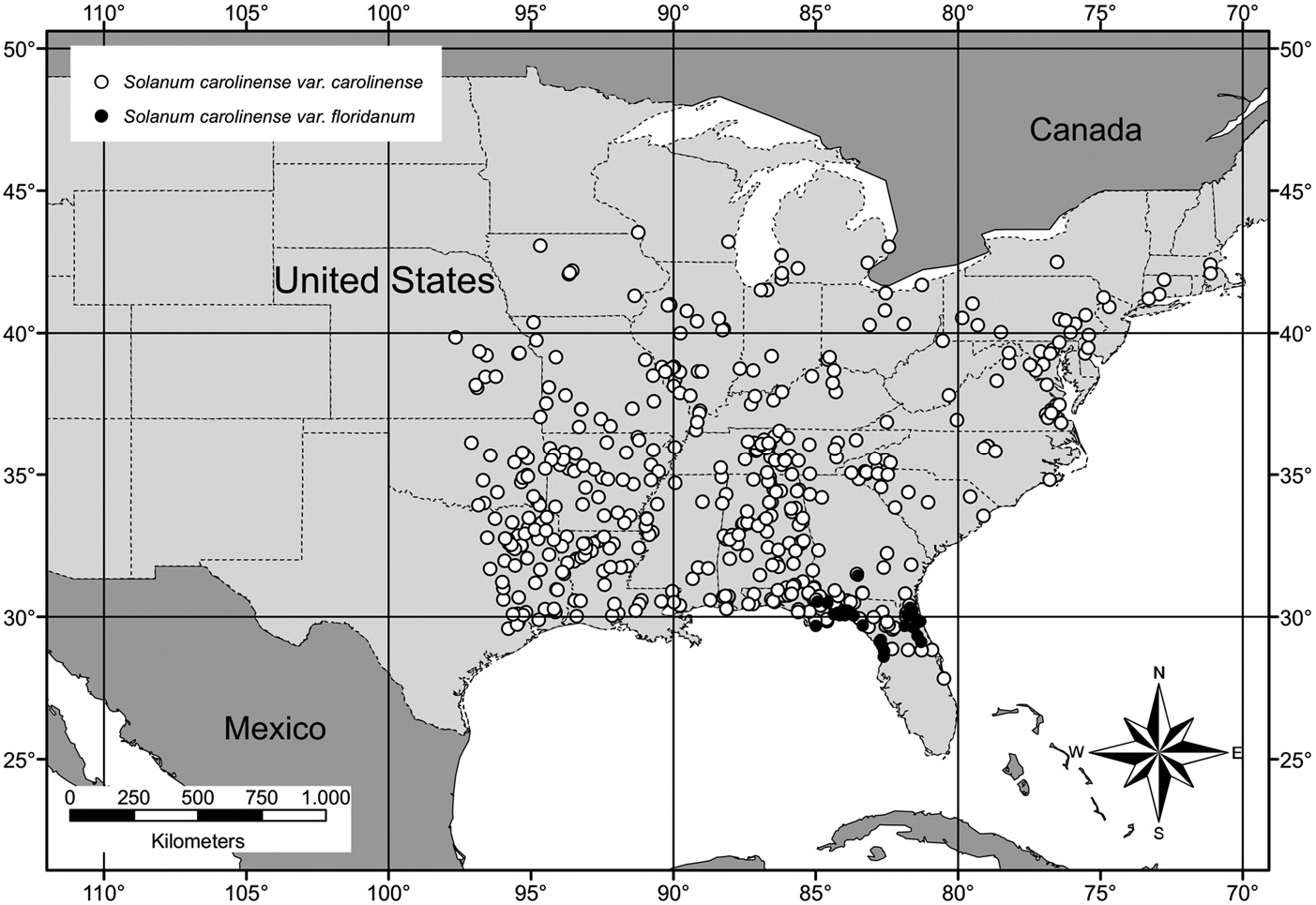