Type locality and ecological conditions. The sampled wells were situated in the Tamlouka plain (36°4’6”N 7°01'46"E), northwest of Oum El Bouaghi, Algeria. This plain essentially consists of quaternary fluvial alluvial filling. The aquifer is oriented southwest-northeast with a thickness varying between 9–12 m (upstream) and 5–8 m (downstream). Eleven wells out of 16 prospected harbored the new species ( Merzoug et al. 2010). When present in a well, the species was rather abundant (total abundance 736 specimens, varying from 13 to 305 individuals per well) compared to another co-occurring species belonging to the same genus ( P. africanus  ), which was collected in two wells only (total abundance: 24 specimens). Amphipod diversity of the sampling area included also a new, not yet described genus observed in five wells (96 specimens; Merzoug et al. 2010). Physicochemical conditions were characterized by very high water mineralization (Electric Conductivity ranging from 1344 µS.cm -1 to 2211 µS.cm - 1), temperatures varying from 19°C to 21,7°C and oxygen content from 6,8mg.L -1 to 8,3 mg.L -1. Detailed analyses also demonstrated that most of the wells were polluted by organic contaminants ( Merzoug et al. 2010).

Etymology. The specific name djemoi  refers to Prof. Djemoi Merzoug (University Larbi Ben H'idi), who worked on the groundwater invertebrate fauna of the area and discovered the species. It can be treated as a noun in apposition.

Gnathopod 1 ( Fig. 5AView FIGURE 5): Basis wider from proximal to median region, with a row of 8 very long setae on posterior margin, plus another row of 4 similar setae proximally on lateral surface of article. Ischium and merus of similar length, bearing 2 (ischium) and <10 (merus) simple setae on posterior margin. Carpus length similar to propodus, with 6 or 7 (♀) rows of 3–6 long and bifid setae on posterior margin, most of them bearing tiny setules along distal half of their length (only the longest), and 4 setae of variable lenght on anterior margin. Propodus 1,38 times longer than wide with about 11 setae irregularly distributed in 4 clusters over anterior margin of article, 4–6 strong bifid spines of variable length at palm angle ( Fig. 5View FIGURE 5 A-detail); palm margin weakly armoured.

Pereopod 5 ( Fig. 2C, CView FIGURE 2 1View FIGURE 1): remarkably shorter than pereopods 6 and 7 (about half as long as their length). Basis large with anterior and posterior margins convex, and with a reduced posterodistal lobe. Merus and carpus similar in length, propodus slightly longer. Dactylus short (34% of propodus) with a short claw (40% of dactylus length).

Telson ( Fig. 3C, DView FIGURE 3): subrectangular, slightly broader than long, shallowly excavate. Cluster of 2–3 subequal spines subdistally at each side, plus pair of flaccid sensorial tufted seta (plumose setules) on lateral margin; spines shorter than telson itself in both sexes. Sexual dimorphism apparent in telson being larger in the female, with emargination extremely shallow, and three spines at each side compared to only two in the male. Lateral sensorial tufted setae are also in a more distal position in the male than in the female.

Remarks and affinities. Pseudoniphargus djemoi  belongs to a group of species characterized by the common display of a male uropod 3 exopod strongly elongate (more than 10 times as long as broad) but with the corresponding peduncle only moderately elongate (between 2.1 and 3.5 times as long as broad), combined with a pereopod 5 - pereopod 7 basis lacking a strongly overhanging posterodistal lobe in the male ( Stokkan et al. 2018). These species include: P. fragilis Notenboom, 1987  , and P. nevadensis Notenboom, 1987  , both from southern Spain; P. associatus Sánchez, 1991  , from Tenerife (Canaries); and P. longipes Coineau & Boutin, 1996  , from northern Morocco (see Notenboom 1987; Sánchez, 1991; Coineau & Boutin 1996). Of them, only P. associatus  shares with the new species the absence of basofacial spine on the peduncle of uropod 1. But it can be readily differentiated from the new taxon on the basis of the much shorter female uropod 3 exopod, up to 6.3 times longer than wide (versus up to 11.1 times longer than wide in P. djemoi  sp. nov.), and male gnathopod 1 carpus shorter than the corresponding propodus (versus carpus and propodus about equal length in P. djemoi  sp. nov.).

Three species of Pseudoniphargus  are known only from the female: P. duplus Messouli, Messana  & Yacoubi- Khebiza, 2006, and P. italicus Karaman & Ruffo, 1989  , both from Sicily; and P. unispinosus Stock, 1988  , from Tenerife (Canaries). Again, they display a basofacial spine on the peduncle of uropod 1, in sharp contrast with the condition exhibited by the new species described herein.

A key to the species of Pseudoniphargus  present in Africa and the Mediterranean islands, including the new species, is presented below (see also Table 1).

Distribution of the genus Pseudoniphargus  in continental Africa. The genus Pseudoniphargus  is widely distributed around the Western Mediterranean coasts and along the Atlantic coasts of the Iberian Peninsula and Morocco (see Notenboom 1988 and references herein). The genus is also very diversified in Mediterranean (e.g. Balearic, Corsica, Sicily) and Atlantic islands (e.g. Açores, Canaries, Madeira) as far as Bermuda ( Stock et al. 1986). This wide distribution likely results in the ability of Pseudoniphargus  species to colonize a wide range of environmental conditions ( Notenboom 1988). For instance, the genus is known to inhabit a very wide range of salinity (from anchihaline caves in marine coastal areas to purely freshwater springs) as well as a wide range of altitude (from 0 to 1000 m a.s.l. for Pseudoniphargus unisexualis Stock, 1980  in Spain) or temperatures (up to 44°C, Messouli et al. 2001). Recently, the finding of Pseudoniphargus  in Benin extended significantly the African distribution of the genus from the Maghreb to western Africa and south to the Sahara ( Lagnika et al. 2016).

However, the wide distribution of the genus does not reflect the dispersal ability of species, that remains very low. The narrow geographic range of most Pseudoniphargus  species, which are highly endemic and frequently known only from one or two locations ( Stock 1980; Notenboom 1987; Coineau & Boutin 1996; Messouli et al. 2006) strengthens this idea. In North Africa, only P. longiflagellum  (in Morocco) and P. africanus  (in Algeria and Tunisia) seem to have a relatively wide distribution ( Fig. 6View FIGURE 6). However, very few samples have been collected at this part of the world. Consequently, without more intensive sampling, it is still hazardous to conclude definitively on these aspects, considering also that some misidentifications may have occured. For example, the wide distribution of P. africanus  , previously reported to occur in the Balearic Islands, Croatia, France, Italy, Sicily, and Yugoslavia, is now considered to be reduced to Algeria, from where it was first described ( Messouli et al. 2006).

The high level of endemism, associated to a high species diversity, is likely to be the result of the successive and independent colonization of inland waters by several marine ancestors in the Late Tertiary between the Eocene and the Pliocene ( Stock 1980; Coineau & Boutin 1996). The origin of continental African species is old compared to the species inhabiting the Atlantic and Mediterranean Islands. The colonization of freshwater likely started during the early Miocene (around -20 MYA) from littoral sands of the Tethys. P. africanus  and P. macrotelsonis  , found in Algeria and Tunisia, were for a long time considered to be the oldest species in North African inland waters ( Boutin & Coineau, 1988) until the recent discovery of P. beninensis  , for which the ancestors could have colonized the northeastern part of Benin at the beginning of the Eocene ( Lagnika et al. 2016). However, the lack of knowledge about the freshwater stygofauna of Africa ( Tuekam Kayo et al. 2012) and the fact that at least ten species from northern Morocco ( Messouli et al. 2001) and four from Algeria and Tunisia remain undescribed ( Stock 1980, C.P. personal observations), do not allow us to establish a sound hypothesis on the origin and the geographical distribution of the genus Pseudoniphargus  in Continental Africa. Further investigations using both additional samples and DNA analysis are hence required to disentangle the global and local distribution pattern of the genus. 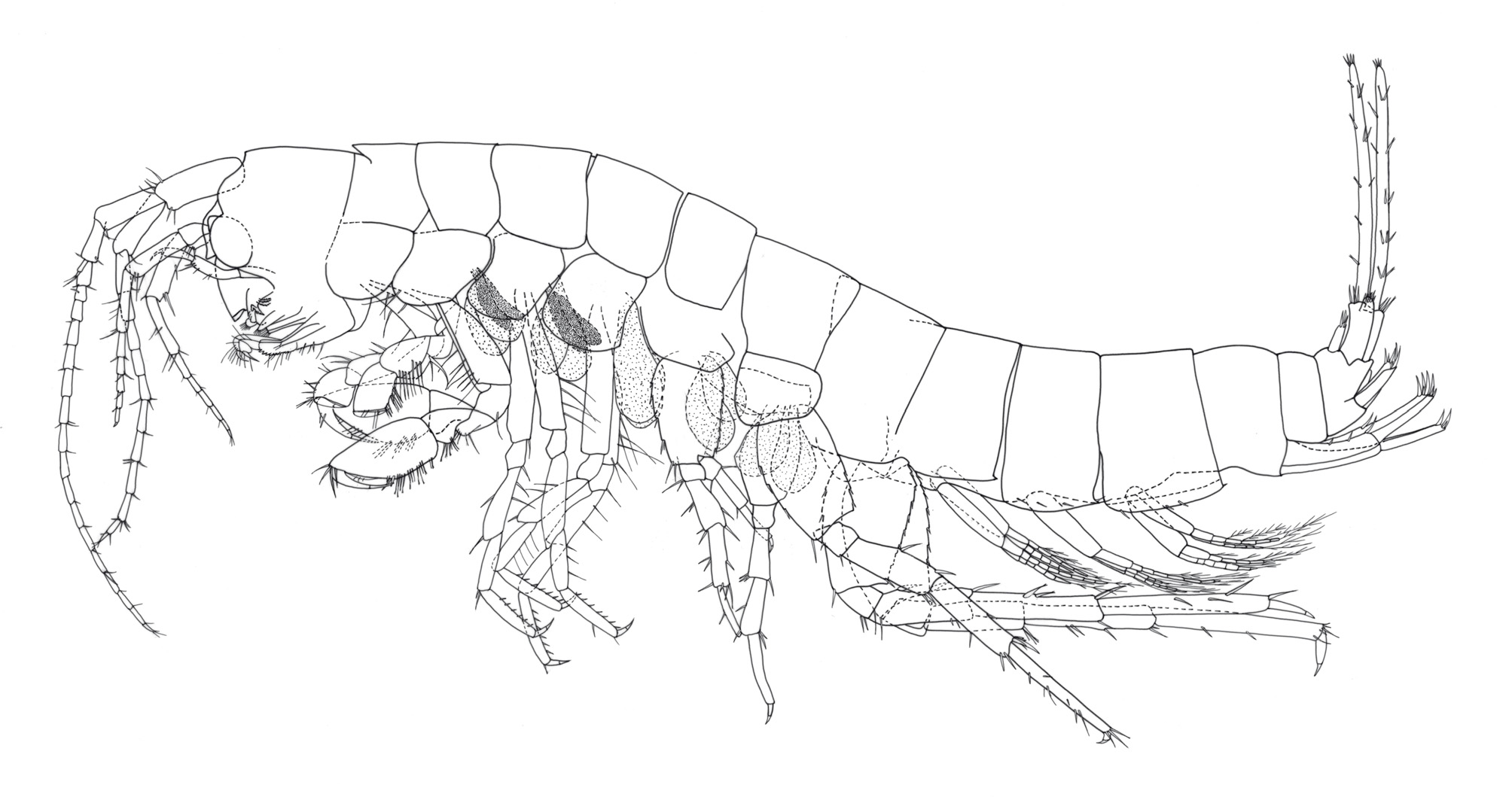 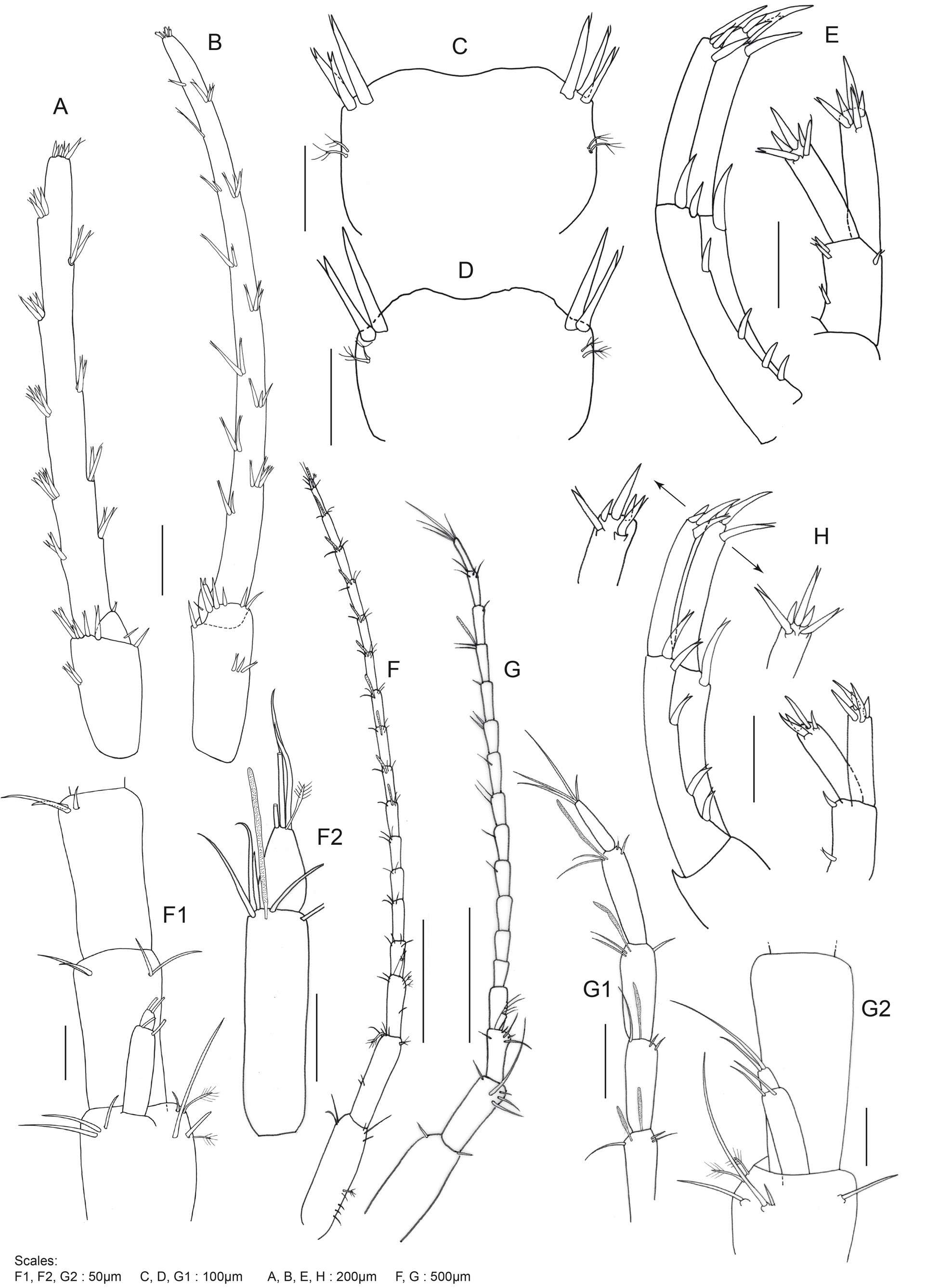 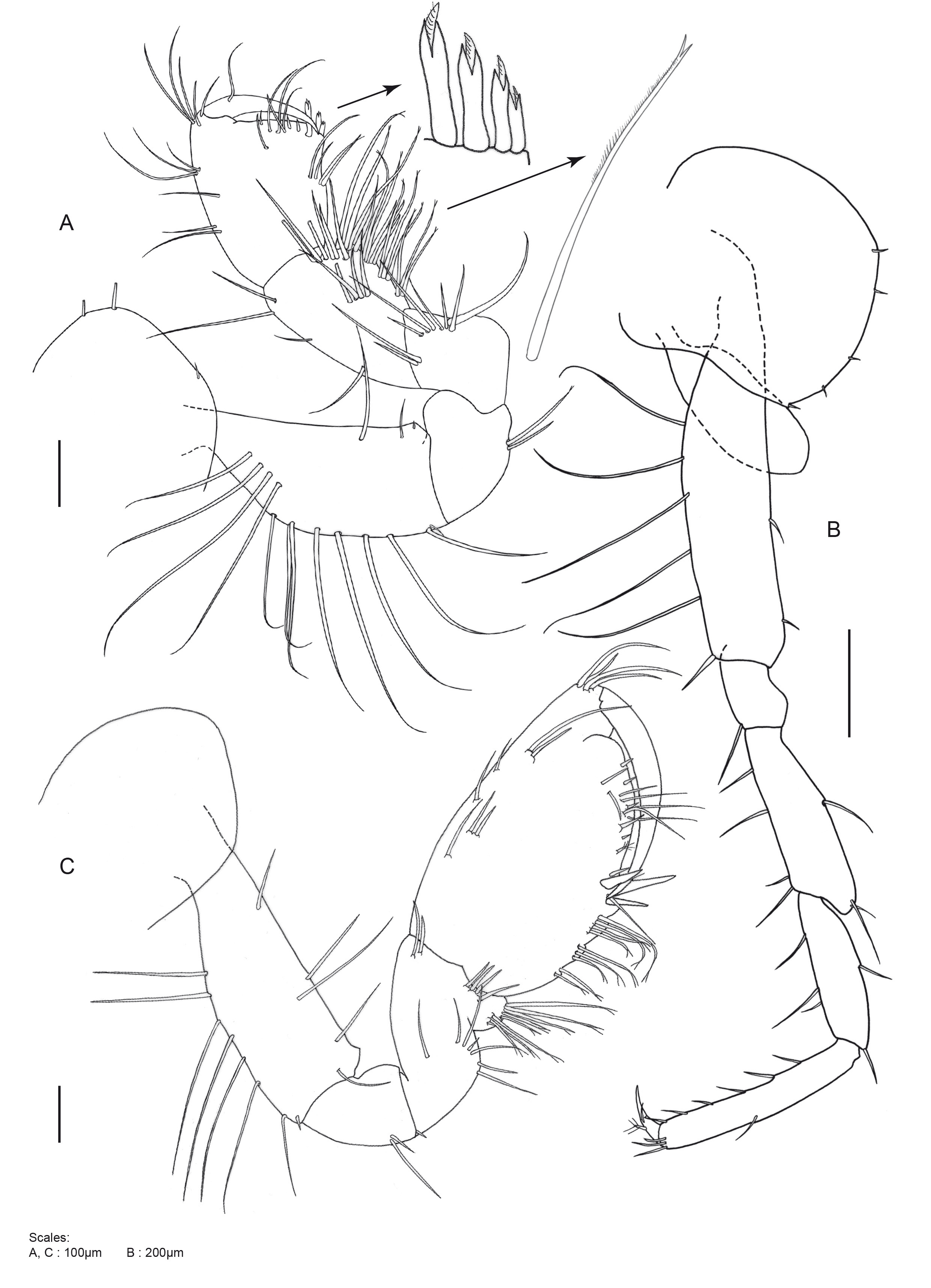