Diagnosis. Leucania rivorum  can be distinguished from most of the New World Lecaunia by the pale rust and beige forewing, white-lined veins, a white spot at the end of discal cell bordered proximally by a black spot, a postdiscal row of minute black dots over the veins and an additional black dot below the origin of CuA 2 and the hind wing uniformly translucent white, including the fringe. In the male genitalia, the cucullus is triangular, longer than wide; ampulla narrow and long; sacculus rounded, distally narrowed and with a small indentation separating it from cucullus; distal portion of uncus enlarged dorso-ventrally and densely covered by long and robust setae both dorsally and ventrally; fultura inferior broad, rugose, and bearing a pair of erect short lateral rectangular projections, as far apart as the width at the base of cucullus; and vesica with several thin slender and pointed cornuti, wider than in L. multistria  .

Male genitalia: Tegumen broad. Saccus V-shaped, about 3/5 as high as tegumen. Valva broad at base and gradually tapered towards apex, roughly twice as long as wide; sacculus broadly expanded and rounded along ventral margin, distally narrowed and fused with ventral surface of valva up to shallow indentation differentiating cucullus; editum triangular; clasper sub-rectangular, with short upcurved postero-ventral projection; ampulla narrow, as long as digitus, this narrow sickle-shaped, short, bent at base, then straight; costal sensory plate broad, ellipsoid; cucullus triangular, longer than wide, narrowed distally, feebly convex on dorsal edge, broadly-based and fused with main section of valva, without neck. Poma shield-like, wide transversely. Uncus slender, bent near the base, then straight, distal third enlarged dorso-ventrally and densely covered on both sides by long robust setae. Fultura inferior subrhomboidal, widest at base and rugous, with small paired, sharp apical processes and paired erect lateral projections, these ‘feather flag-shaped’ and widely separated from each other. Aedeagus nearly straight, with broad, swollen coecum, then gradually tapered up to middle, and with tubular distal half; opening of ejaculatory bulb at the beginning of the second third; insertion of manica at the distal third; distal margin with a short right dorso-lateral projection; vesica simple tubular, twisted to right, bearing two groups of cornuti, a bundle of three short needle-like cornuti before middle of vesica followed by gently sinuous row of around 40 longer, spiniform cornuti of approximately similar size. Subscaphium joined to tegumen by narrow arms.

Geographical distribution and phenology. This species occurs in natural open environments such as grasslands from mid- to high elevations of the Atlantic Forest and Cerrado biomes in Brazil, and disjunctly in the eastern Andes of Peru and in an area of low altitude at the border between the Chaco and Atlantic Forest biomes in Paraguay ( Fig. 41View FIGURE 41). The record of L. rivorum  from Tucumán ( Köhler 1947) probably refers to L. pampa  , and the record of L. rivorum  from Cuba ( Draudt 1924) is probably a misidentification of L. chejela  .

This species was recorded almost throughout the year with the exception of July, November and December.

Comments. Leucania rivorum  is a poorly known species, rarely mentioned in the literature. Although the original description does not include illustrations, the species was correctly identified by Hampson (1905), who figured a female from Brazil [from Rio de Janeiro state, deposited at the NHMUK and examined by us], well before the accession of Guenée’s type material at the British Museum (Natural History) via the Oberthür collection in 1927. Despite his accurate identification of that specimen, Hampson (1905) considered L. rivorum  a senior synonym of L. pampa  . Recently, L. rivorum  was reported in studies conducted at several sites in Rio Grande do Sul, southern Brazil ( Specht & Corseuil 2002; Specht et al. 2004, 2005; Bernardi et al. 2011); however, these records are almost certainly incorrect given the distribution of L. rivorum  south of Paraná, Brazil.

Among recent studies mentioning L. rivorum, Specht et al. (2004)  compiled a list of Noctuidae  in the Ceslau Biezanko Entomological Collection (CECB), where a species similar to L. macoya ( Schaus, 1921)  had been identified erroneously as L. rivorum  by Biezanko. The records of L. rivorum  reported by Bernardi et al. (2011) belong to two distinct, unrelated and undescribed species found in southern Brazil (Dolibaina et al., in prep.). We were unsuccessful in our attempts to find the specimens identified as L. rivorum  by Specht & Corseuil (2002) and Specht et al. (2005) at the MCTP, as no determination label with this name was found in their voucher material, and no specimens of L. rivorum  were detected among MCTP material.

The wing pattern of L. rivorum  is like that of several congeners and may be misleading, especially with respect to its close relative L. multistria  . These two species are parapatric throughout most of their distributions, and sympatric only in a narrow zone in the Paraná state, corresponding to the southernmost limit of L. rivorum  and the northernmost of L. multistria  . Similarities in the male suggest a close relationship between these species, in particular in both species the fultura inferior bears a pair of erect lateral processes, which to our knowledge do not occur in any other American Leucania  . The development of the costal sensory plate, which extends through most of the cucullus, is also shared by these two species, although a similar structure is also found in another American species, L. eyre ( Schaus, 1938)  . The shape of the uncus differs markedly, in L. multistria  it is narrowed apically, and dorsally setose as in most American Leucania  ; whereas in L. rivorum  the uncus is dorso-ventrally dilated and densely covered by setae before apex.

The short text attached to the specimen “ holotype ” above may be translated as: “the only specimen on which I have made [or based] my description”. We were unable to locate the second specimen at the NHMUK, referred to by Guenée (1852). In order to ensure the stability of the name and to avoid misidentification with other similar species, the syntype “ holotype ” detailed above and deposited at the NHMUK is here designated as lectotype of L. rivorum  , and the following labels will be added to it: / LECTOTYPUS / Lectotype Leucania rivorum Guenée, 1852 Dolibaina et al.  des. 2019 /. 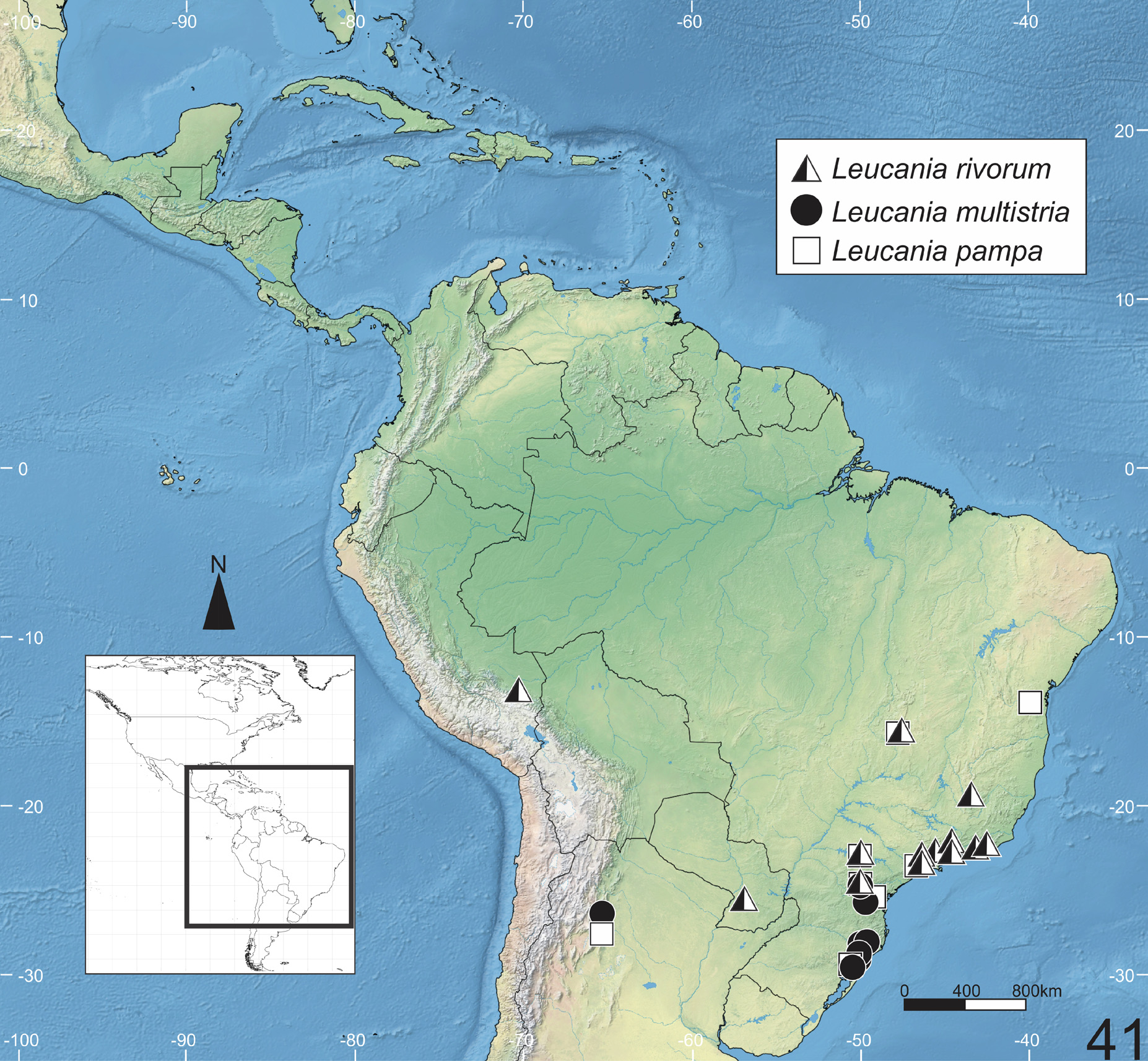 FIGURE 41. Geographic distribution of the species of Leucania belonging to the rivorum species-group. 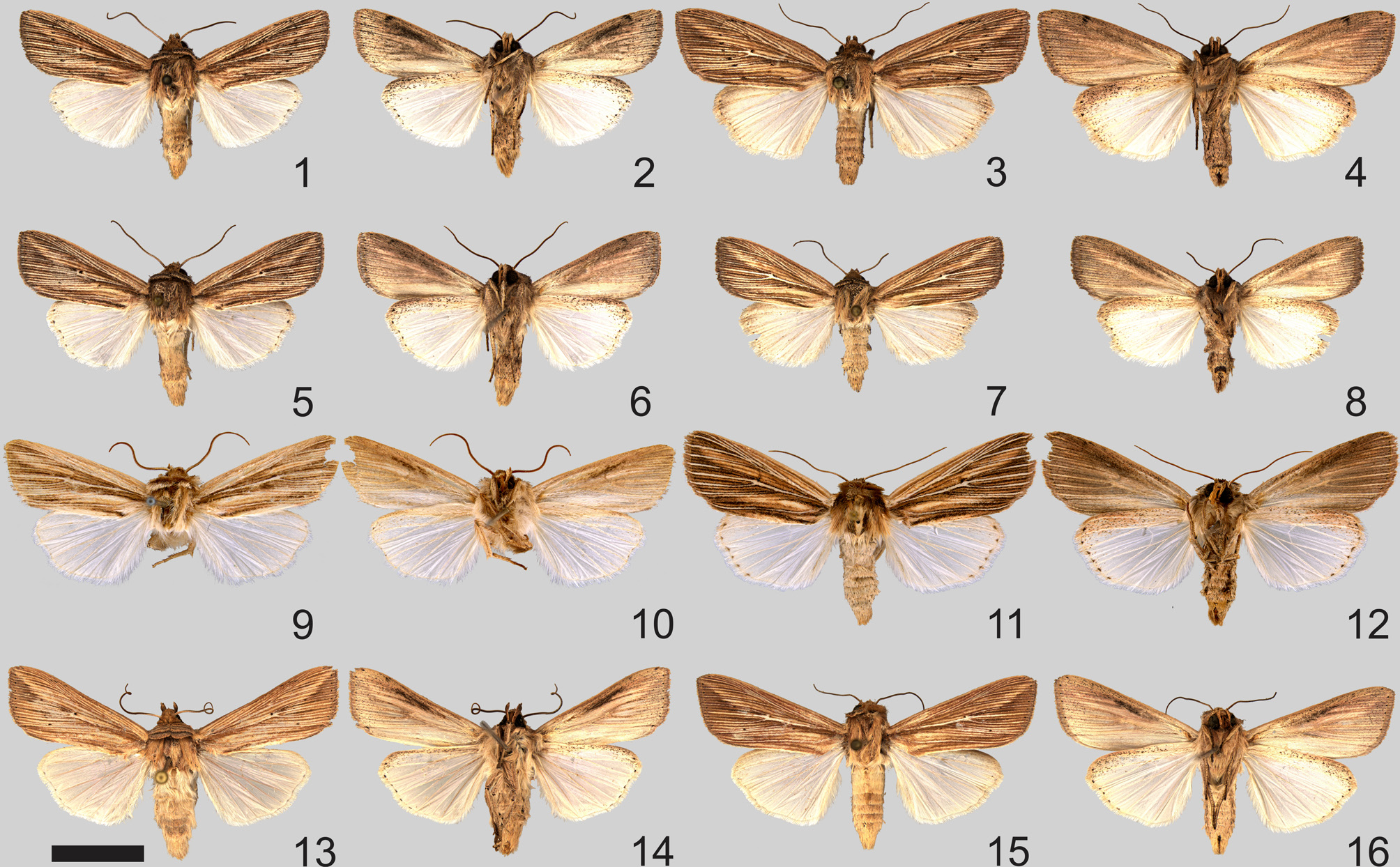 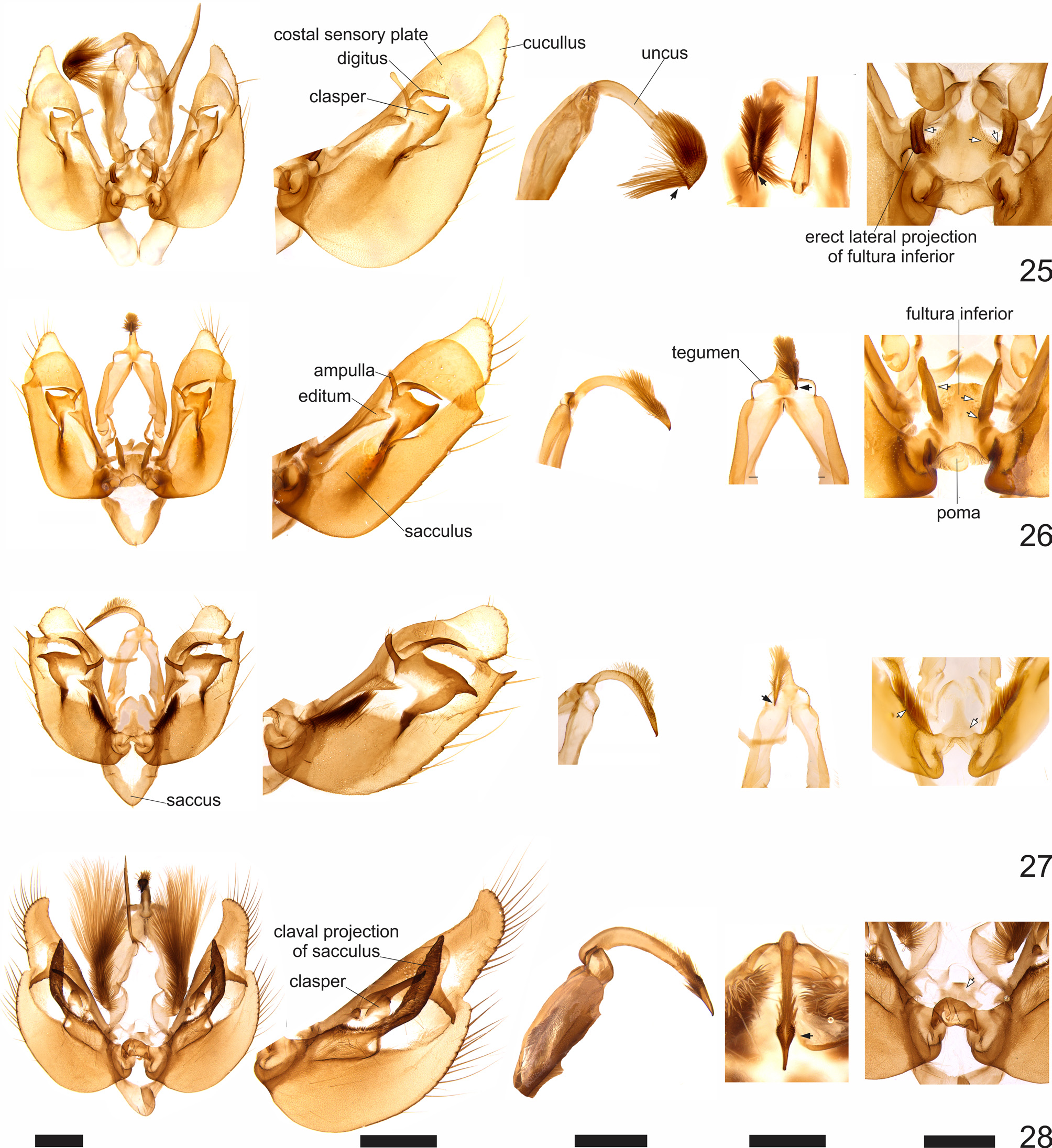 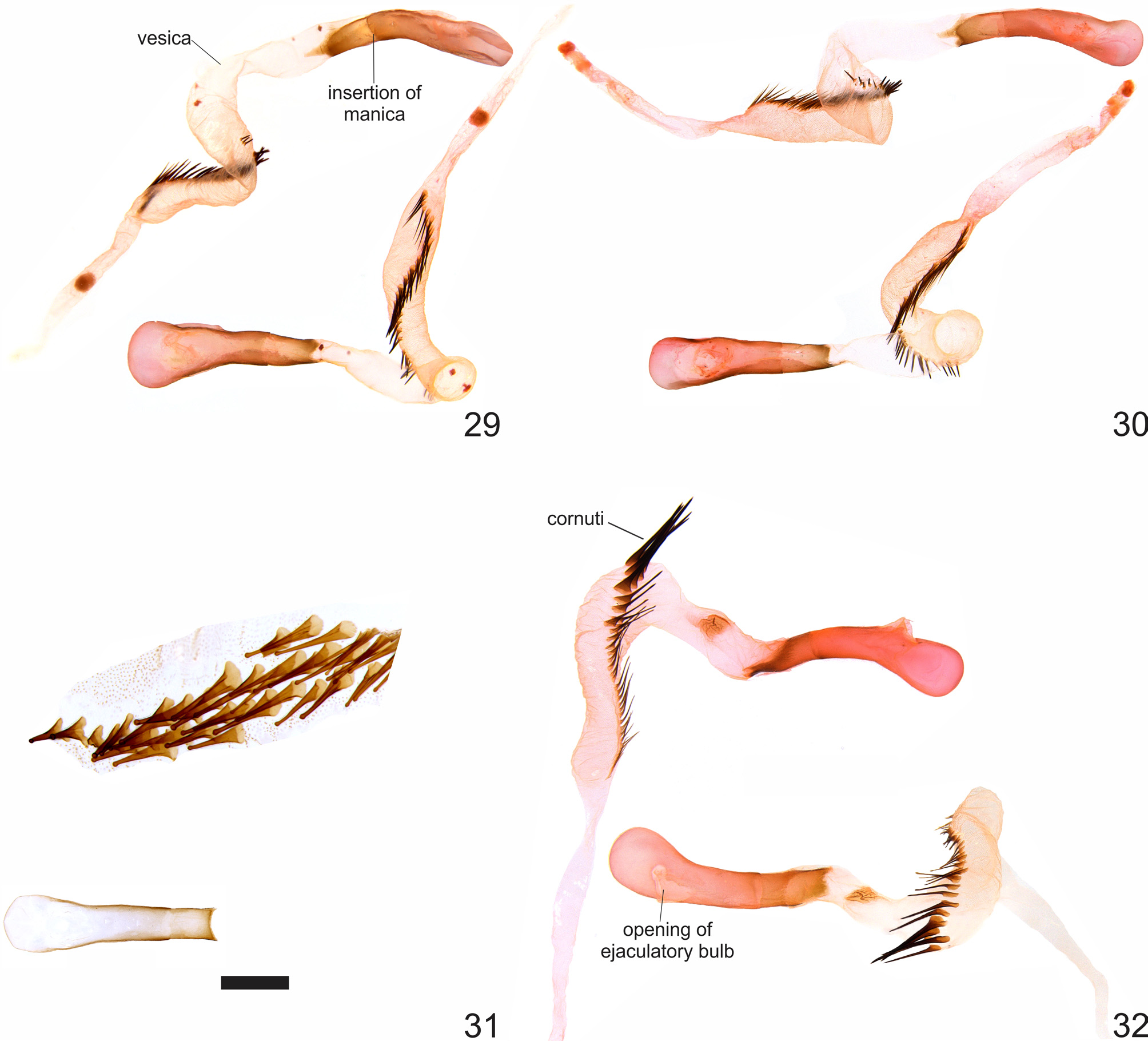 FIGURES 29–32. Aedeagus and vesica of species of Leucania, in right lateral (upper) and dorsal (bottom) views. Fig. 29. L. rivorum. Fig. 30. L. multistria, stat. rev., comb. nov.. Fig. 31. L. pampa, stat. rev., upper is an amplified part of the vesica (out of scale), bottom is the dorsal view of the aedeagus without vesica (this structure broke up in the dissected male used in the plate). Fig. 32. L. chejela. Specimens are from the same localities of the figures 25–28. Scale bar: 1mm.