The body is 3–5 cm long, about 0.7 mm wide, translucent white in colour ( Fig. 15AView FIGURE 15). The head is much more transparent than the following portion, wider than the neck; the rhynchodaeum seen through the epidermis is white, cone shaped, tapering anteriorly. When put in a Petri dish with seawater, the animal showed searching behaviour, frequently swinging the head from side to side. The ovaries are tinged with a greyish colour. There is a transparent ‘tail’ region that contains neither intestine nor gonads; it tapers posteriorly to end in a pointed tip ( Fig. 15BView FIGURE 15). The tail is at least 10 times as long as the diameter of its most anterior portion.

Parenchymatous connective tissue is inconspicuous throughout the body, except as thin membranes surrounding various organs.

The rhynchodaeal epithelium is unciliated and shows no significant regional differences in thickness throughout its length; it is generally thinner dorsally and ventrally (20– 30 µm thick) than laterally (35–60 µm thick); acidophilic glandular cells predominate, but in one specimen basophilic glandular cells also occur ( Fig. 17AView FIGURE 17). The rhynchodaeum is innervated ventrolaterally on each side by 3–5 nerves from the sub­epidermal neuro­glandular layer; the rhynchodaeal nervous layer is located basal to the glandular epithelium. A definite rhynchodaeal sphincter was not found. A rhynchodaeal caecum is absent; in one specimen, however, a lateral bulge was found on one side, probably caused by contraction during fixation.

The rhynchocoel does not extend to the posterior end of the body. Its wall is composed of separate outer circular and inner longitudinal muscle layers. Posteriorly, it is not developed into a muscular sac. No rhynchocoel caecum was found.

The mouth opens just behind the cerebral sensory organs. The buccal/foregut wall is densely ciliated, with both acido­ and basophilic glandular cells; the foregut is about 3 mm long. The intestinal wall contains mainly acidophilic cells, but a small number of basophils cells are also found. The intestine has no lateral diverticula, which, however, appear to be present regionally because the gonads are deeply embedded in the intestinal wall.

A pair of lateral cephalic lacunae meets anteriorly above the rhynchodaeal opening. After passing through the cerebral ring, they connect ventrally to form a cross­sectionally U­shaped vessel; a thick­walled mid­dorsal vessel is dorsally branched off from the upper surface of the ventral portion of the U­shaped lacuna to enter the rhynchocoel ( Fig. 19BView FIGURE 19). The U­shaped lacuna, with its two arms surrounding the cerebral sensory organs ( Fig. 19BView FIGURE 19), then divides into two lateral lacunae just anterior to the mouth with the bottom becoming closed between the buccal wall and rhynchocoel. In the foregut region, the thinwalled lacunae lie lateral to the rhynchocoel and above the lateral edges of the foregut, and give rise ventrally to a delicate vascular network that surrounds the foregut laterally, ventrolaterally, and ventrally. In the anterior intestinal region, the vascular network converges posteriorly with a thick­walled lateral blood vessel on each side of the body, while the thin­walled lateral lacunae remain for a short distance, flanked by the rhynchocoel, before ending blindly. The lateral vessels lie ventrolateral to the alimentary canal between the splanchnic and body­wall longitudinal muscle layers. Initially each lateral vessel, together with the bordering splanchnic muscle layer, is distinctly embedded in the gut wall ( Fig. 16View FIGURE 16). Posteriorly, even after the splanchnic muscle layer disappears, the lateral vessels remain in close contact with the intestine.

Pseudometameric transverse connections between the lateral and mid­dorsal vessels in the intestinal region were not found.

The brain and lateral nerve cords are situated between the epidermal basement membrane and the body­wall circular muscle layer. A single dorsal commissure, 22–28 µm thick, lies anteriad to the ventral one, 28–30 µm thick. Dorsal and ventral ganglia are almost the same size. Medially each lateral nerve contains a single giant fibre ( Fig. 15DView FIGURE 15), about 2 µm in diameter, that can be traced forward to a neural cell body, about 5 µm across, located dorsolaterally in the dorsal commissure. The dorsal ganglion slightly forks posteriorly into upper and lower branches, the latter of which innervates the cerebral sensory organ. The upper mid­dorsal nerve originates in the dorsal commissure and extends posteriorly between the epidermal basement membrane and the body­wall outer circular muscle layer ( Fig. 17CView FIGURE 17); farther back, in the anterior portion of the intestine, the mid­dorsal nerve rises to lie between the epidermis and the basement membrane ( Fig. 17DView FIGURE 17); this nerve becomes indistinguishable posterior to the rhynchocoel. The mid­dorsal nerve sends numerous branches downwards to the dorsal side of the rhynchocoel wall; thus a lower mid­dorsal nerve seems to be present, but it is not continuous anteroposteriorly.

Sense organs On each side of the head there is an epidermal indentation 60 µm long in the antero­ posterior axis and 80–100 µm long in the dorsoventral axis, lined with very long (about 20 µm) cilia, but no glandular cells. From each indentation, a ciliated canal leads posteroobliquely inward, narrowing from 40–45 µm to about 30 µm in external diameter (10 µm internal diameter), before turning medioventrally to enter a cerebral sensory organ on its dorsolateral surface 1/3 of the way from its anterior end; the canal runs posteriorly inside the organ without branching for the posterior 5/6 of the length of the organ, then terminates in a blind end. A bundle of nerve fibres, innervated from the ventral branch of the posterior end of the dorsal ganglion, runs along the medial side of the canal. Each cerebral sensory organ is an ovoid mass of neuro­glandular cells, oval in cross section, about 70–80 µm wide by 90–100 µm high, and about 120–150 µm long; it lies in the cephalic blood lacuna ( Fig. 19BView FIGURE 19).

There are neither eyes nor lateral sensory organs.

All the three specimens examined were mature females. The ovaries, up to 170 µm in diameter, each containing a single egg, are embedded in the intestinal wall ( Fig. 19AView FIGURE 19). A gonoduct leads from each ovary, passing above the lateral nerve cord, then opens dorsolaterally in the epidermis.

Hubrechtella  (= Coeia  ) ijimai ( Takakura, 1922)  comb. nov. has not been redescribed since its original description ( Takakura 1922), which provides an account mostly of the features of internal morphology used in the modern diagnosis for the genus Hubrechtella  , but not of the characters currently used in distinguishing between species placed in this genus. Unfortunately, the type material of Coeia ijimai Takakura, 1922  is considered to be lost ( Kajihara 2004); thus, it is impossible to identify this species using its internal morphology. Accordingly, I identified my specimens as conspecific with the nominal species Coeia ijimai Takakura, 1922  on the basis only of external characters. However, the resemblance of the shape of the head in living material to Takakura’s (1922) illustration, and the nearness of my sampling site to the type locality, lend support to the identification of my material as Coeia ijimai Takakura, 1922  .

One difference between Takakura’s description and my material is the size of the body; Takakura’s specimens measured over 20 cm in length, while mine do not exceed 5 cm. This difference may be due to the age of the worms. Eventually a neotype must be designated for Coeia ijimai Takakura, 1922  ; however, this will best be done after thorough study of newly collected material from the type locality, or at least closer to it.

The combination of the characters summarised in Table 3 enables Hubrechtella ijimai ( Takakura, 1922)  comb. nov. to be distinguished from all other species currently placed into Hubrechtella  . 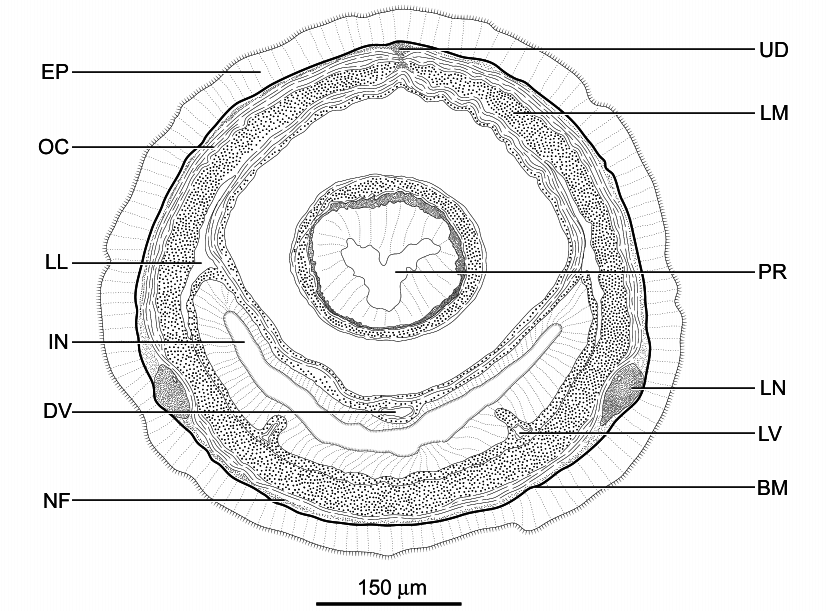 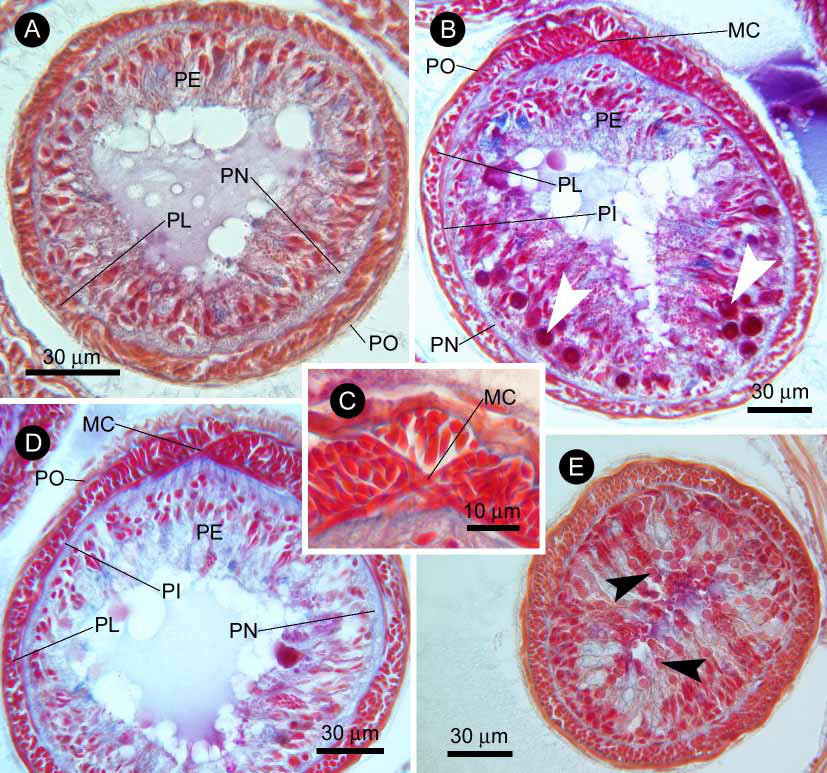 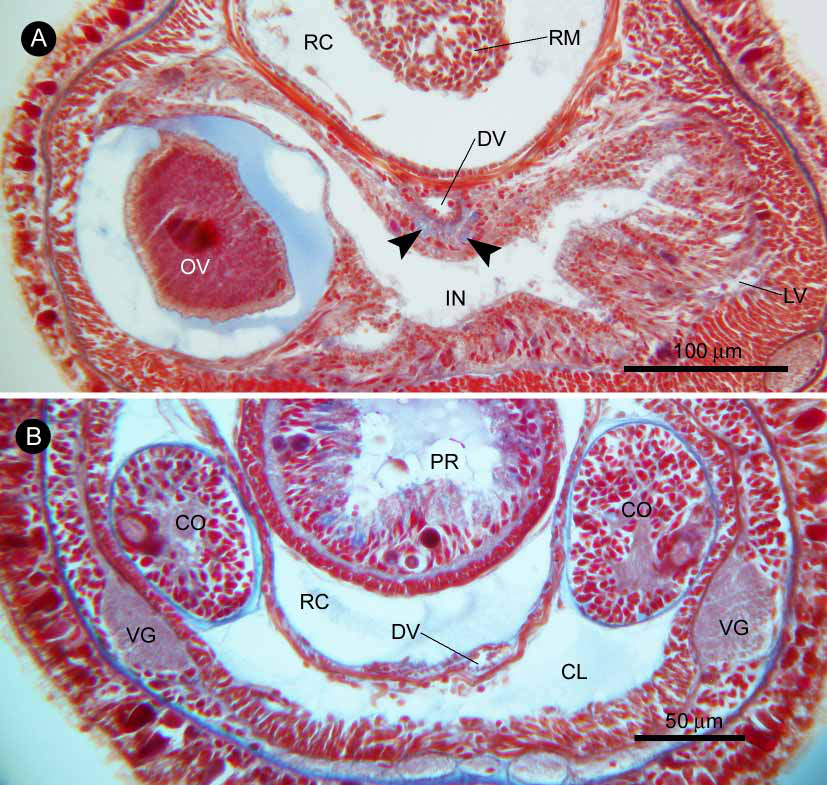