Diagnosis. A small brownish black species with frons only slightly projecting in front of eye, the head predominantly dirty yellow with the frontal triangle black and dusted, somewhat variably, on all but a distinct median groove; antenna excluding arista, tip of the scutellum, extensive pleural markings, knob of haltere and four basal tarsomeres of all legs dirty yellow, the wing greyish hyaline and dorsum of scutum with a pattern of grey dusting.

Description. Male. Head deeper than long; parafacial and gena broad, quite as deep as postpedicel, grey dusted on all but extreme mouth margin, the minute reduced vibrissa and genal setae black; face with antennal grooves black, the ground colour somewhat obscured by grey dusting; frons one and a half times as long as broad, with a narrow band of silvery dust along either eye margin, elsewhere very weakly grey dusted; frontal triangle at level of anterior ocellus occupying only three quarters of width of frons, anteriorly not extending beyond level of eye and forming an angle of slightly less than 30°, its sides straight, becoming somewhat concave posteriorly, with a distinct undusted median groove extending from anterior ocellus to tip in strong contrast to its dusted remaining parts, the extent of dusting around this groove variable between specimens; head bulging slightly posteriorly behind the vertical setae, of which the inner is displaced laterally, being situated in front of and only by its own width closer to the median than the outer; ocellar seta reduced to a fine hair that is only half as long as the verticals; occiput only very weakly grey dusted, infuscate on its dorsal half except for the bulge bearing the vertical setae; postpedicel one and a quarter times as long as deep with apical angle 80° and black on outer surface on dorsal one third of its height. Postpronotal lobe grey dusted dorsally, shiny beneath; scutum heavily grey dusted, less heavily so on two narrowly separated median bands extending from fore margin to slightly beyond suture, after which they become broader and more diffuse, on dorsocentral lines and on centre of notopleuron, the surface rather coarsely punctured, becoming progressively more so posteriorly and almost shagreened on surface of scutellum, this last with apical margin straight, its single pair of setae convergent and as long as the distance separating them; other scutal setae are 1 dorsocentral, 1 posterior notopleural and 1 postalar; pleura brown to black, undusted posteriorly to level of anterior one third of anepimeron and ventrally to base of fore coxa; katepisternum with dirty yellow dorsal band; propleuron dirty yellow; anepisternum dirty yellow with infuscation on dorsal, posterior and ventral margins. Wing and squamal fringe concolorous. Hind tibia lacking pilose posterodorsal sensory area, with only a minute pore in its position. Tergites brown, weakly grey dusted, with dirty yellow hind margins.

Female differing from male only in postabdominal characters.

A dissected female was found to contain a larva of half its abdominal length, in which a sclerotised cephaloskeleton was visible.

Note. The dusting of the frontal triangle of this species is variable, and this could lead to confusion with P. punctifrons Becker. However  , the two species are abundantly different in other than the key characters given, punctifrons  having the ocellar seta long and strong, as long as the external vertical, no pitting at the bases of scutal and scutellar clothing hairs, and the wing longer than the body, in ratio of 23:20. 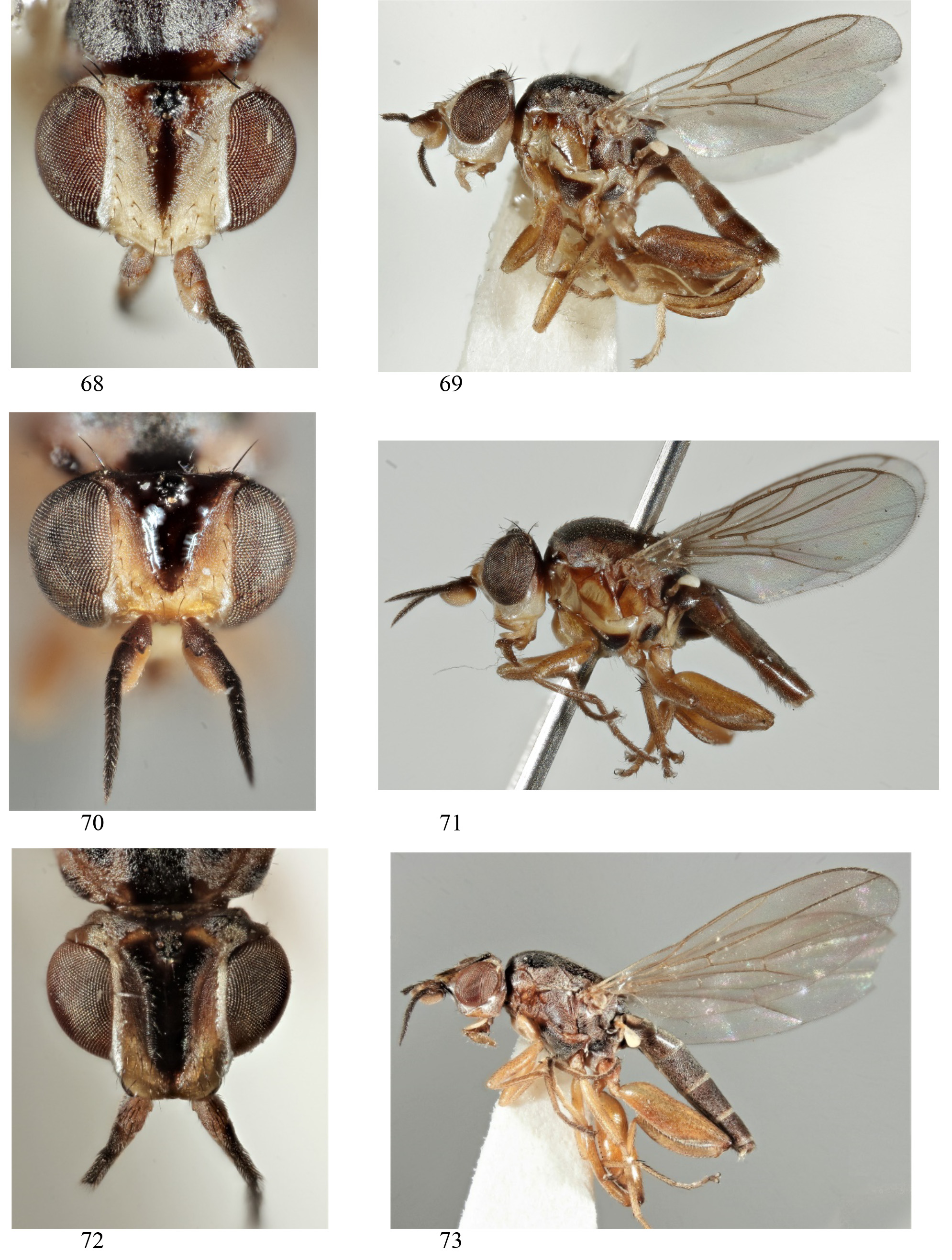