Etymology: The new species is named after an older name for the country of origin, Persia.

Remarks: The new species brings to 25 the number of species of burrowing shrimps documented in the Persian Gulf and Gulf of Oman ( Sepahvand & Tudge 2019). The new species is in possession of 6 spines on the cutting edge of large cheliped, the telson with 2 pairs of lateral spines as well as 2 spines in the mid-dorsal region, and the exopod has 4 movable spines on the distal margin. The present species agrees well with M. indica Sakai, 2002   and M. sinica Liu & Liu, 2009   in many diagnostic aspects, including body shape, the relative size and shape of pereopods 2–4, maxilliped 3, and the rostrum. However, they differ from Michaelcallianassa persica   sp. nov as shown in the table 1.

Pleopod 1 and Pleopod 2 of Michaelcallianssa indica Sakai 2002   and M. sinica Liu & Liu 2009   are composed of three segments, while in the present study, and in Sepahvand et al., (2013), and Sepahvand & Sari (2010), these pleopods are composed of two segments. It seems that in callianassoids the second article of pleopod 1 or 2 has a shoulder which gives the appearance of a narrower distal section which could be misinterpreted as an articulation.

Using Sakai (2011), M. persica   sp. nov. keys to Michaelcallianassa Sakai, 2002   but on the other hand using the key of Poore et al., (2019), the present new species assigns to Balsscallianassa Sakai, 2011. The keys of Sakai 2011 use the ornamentation of abdominal somites 3–5 for recognizing the genus Michaelcallianassa   , while B. masoomi ( Tirmizi 1970)   and B. foresti ( Le Loeuff & Intès, 1974)   both in Balsscallianassa also have this type of ornamentation. Poore et al. (2019) emphasized the male major cheliped merus with a lower margin that is almost straight and male pleopod 2 being uniramous in defining the genus Michaelcallianassa   , but these characters are also present in B. foresti ( Le Loeuff & Intès 1974)   . It seems that the most reliable character state for delineation of these two genera is maxilliped 3.

It is also noted here that there can be differences in morphology between different size (and age) individuals, and it is possible that these smaller specimens of the new species, M. persica   sp. nov. may be exhibiting some minor differences because of this. Further collection of more, and larger specimens of this species, will be useful to investigate this idea.

Among the known Cheramus   -like species, Balsscallichirus masoomi ( Tirmizi 1970)   appears closest to the present new species in sharing the shape of the body, rostrum, pleomeres 2–5 and pereopods 2–4. However, B. masoomi ( Tirmizi 1970)   is readily distinguished from the present new species by its very narrow maxilliped 3, and armed ischium and merus of the large cheliped. 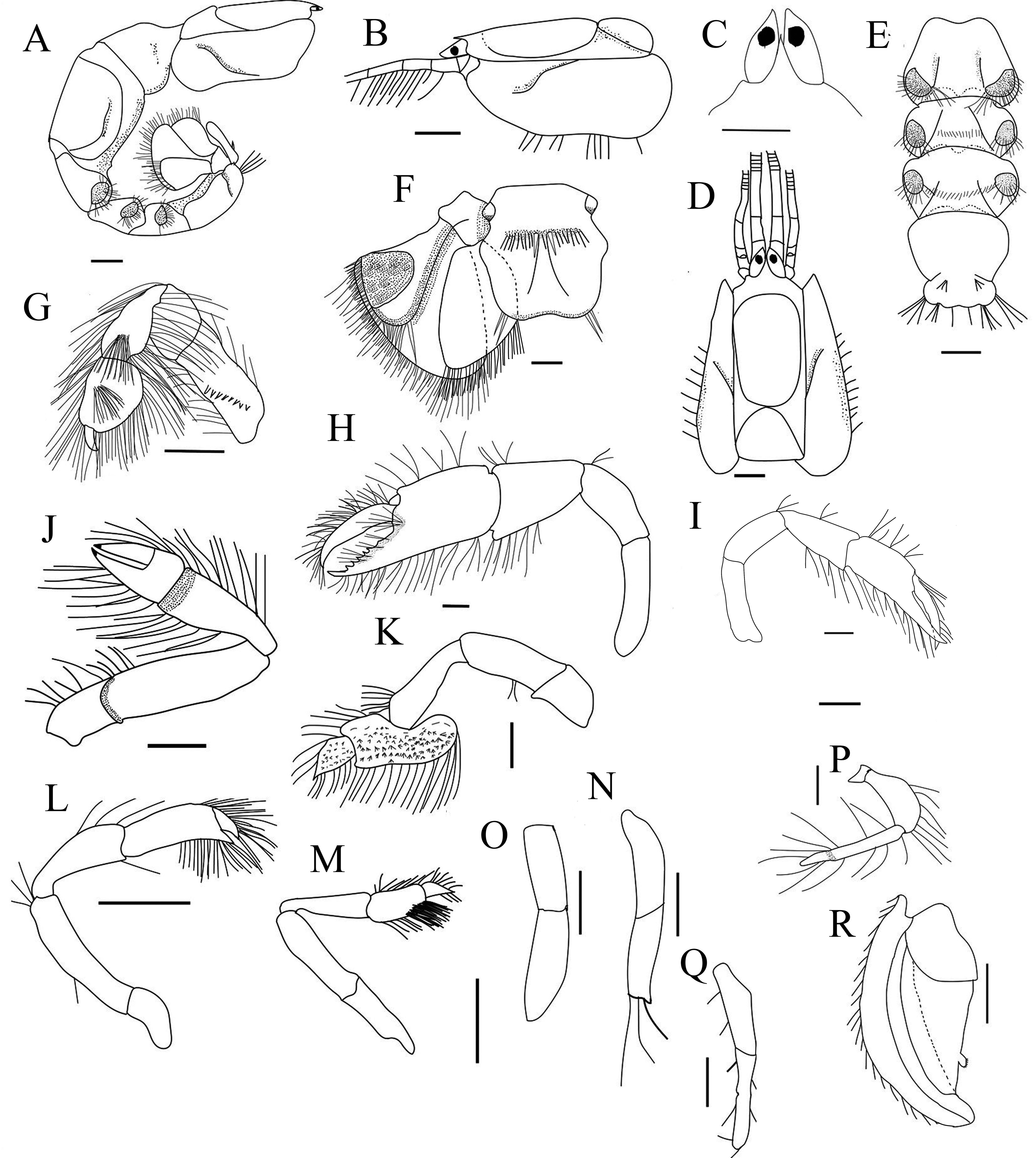