Etymology. Named in honour of the bryozoologist and geologist David A. Brown (1916–2009).

Remarks. All specimens of M. browni  n. sp. from Lebanon, Tadjoura, Oman and Maldives are remarkably similar in features of the primary orifice, particularly the shape and distribution of the denticles on the distolateral edge, and the proximal edge slightly corrugated between low condyles. These condyles can be poorly or not prominent in the colonies from Oman and Maldives. The number of denticles observed in SEM photos indicates that this parameter may range differently according to locality: 12–16 in Lebanon (Beirut), 10–16 in the Gulf of Aden (Tadjoura), 13–18 in south Oman, 10–13 in the Maldives. For the whole suite of specimens, 13 is the modal number of denticles, which represents only 26 % of the distribution. However, the tiny morphological traits of the orifice can be considered as highly diagnostic for this personate Microporella  species. Zooids of M. browni  n. sp. typically bear a single avicularium, lacking in some zooids including periancestrular ones. However, paired avicularia can be exceptionally present, as observed in two non-ovicellate (i.e. not associated with distal ooecium) zooids from two different colonies of the Tadjoura material. The colonies from Tadjoura also differ in their zooidal dimensions, which are larger than those of specimens from the other localities. These two particular features in the Tadjoura material may correspond to a local geographical morphotype. The southeastern Mediterranean specimens are similar in all morphological features to those collected in the Indian Ocean.

Microporella browni  n. sp. strongly resembles M. orientalis Harmer, 1957  , originally described from Indonesia and commented on by Tilbrook (2006) after examing the holotype (NHM 1986.2.1.2) and studying one specimen from the Solomon Islands. According to Tilbrook (2006), M. orientalis  is clearly characterized by orifices with a denticulate distal border and personate ovicells, i.e. with a raised proximal collar fused to the proximal edge of the entooecium. These features also characterise our specimens. However, comparison with unpublished SEM images of Harmer’s holotype (made by S.F. Mawatari) show clear differences in the mandible shape, which is setiform, thin, moderately long and pointed in M. browni  n. sp., while it is short, more robust and hooked in M. orientalis  . Specimens with personate ovicells from the area of Cochin ( India) ascribed to M. orientalis  by Menon and Nandini Menon (2006, fig. 90) bear the same type of short and robust mandible. These authors also mentioned specimens ascribed to M. ciliata  having orifices denticulated distolaterally. This identification is obviously not correct, but cannot be interpreted given the lack of SEM illustrations. Microporella browni  n. sp. and M. orientalis  also differ in the shape of the proximal edge of the zooidal orifice. The primary orifice of M. orientalis  illustrated by Tilbrook (2006, pl. 45 B) presents a proximal edge that is smooth and without condyles, while in our material it is normally uneven and presents a pair of low shoulder-shaped condyles.

The figures of M. monilifera Liu & Liu, 2003  (see also Liu et al. 2001) show that this species from the South China Sea is similar to Microporella browni  n. sp. in several features, indicating a very close relationship. Both have ascopores bordered by a circular rim, single adventitious avicularia with similar shape, size, orientation and placement and, particularly, the primary orifices of non-ovicellate zooids are very similar in having a beaded distolateral border with similarly shaped denticles and a proximal edge presenting low condyles at the corners. In M. monilifera  , however, the condyles are barely prominent and the proximal edge is smoother, the number of oral spines is only 3 vs 4–5 in M. browni  n. sp., the ovicell is not described as personate and the figured one ( Liu et al. 2003, pl. II, fig. 3) has only lateral flaps that are abutted to the ooecium differently than the raised collar of M. browni  n. sp.. Other differences are presented by the ooecium, which shows a flat, non-porous medioproximal area in M. monilifera  while it is porous and edged by a proximal rim in M. browni  n. sp., and by the ancestrula which is encircled with 18 spines in M. monilifera  vs 10 or 11 in M. browni  n. sp. Another difference is the mandible, described as "elongate triangular, without a horn at either side and with a flagelloid distal portion" ( Liu et al. 2001, p. 814).

Microporella browni  n. sp. also strongly resembles M. maldiviensis  n. sp., with which it shares the same type of personate ovicell, a single avicularium lateroproximal to the ascopore and orifices with the anter bearing denticles and poster slightly corrugated between two shoulder-shaped condyles. However, M. browni  n. sp. differs from M. maldiviensis  n. sp. in having denticles more prominent and the avicularium mandibles with a longer projection and not hooked at the tip.

The geographical distribution of M. browni  n. sp. currently includes the Indian Ocean, with localities in the Oman Sea, the Gulf of Aden and Maldive Islands, and the Eastern Mediterranean. 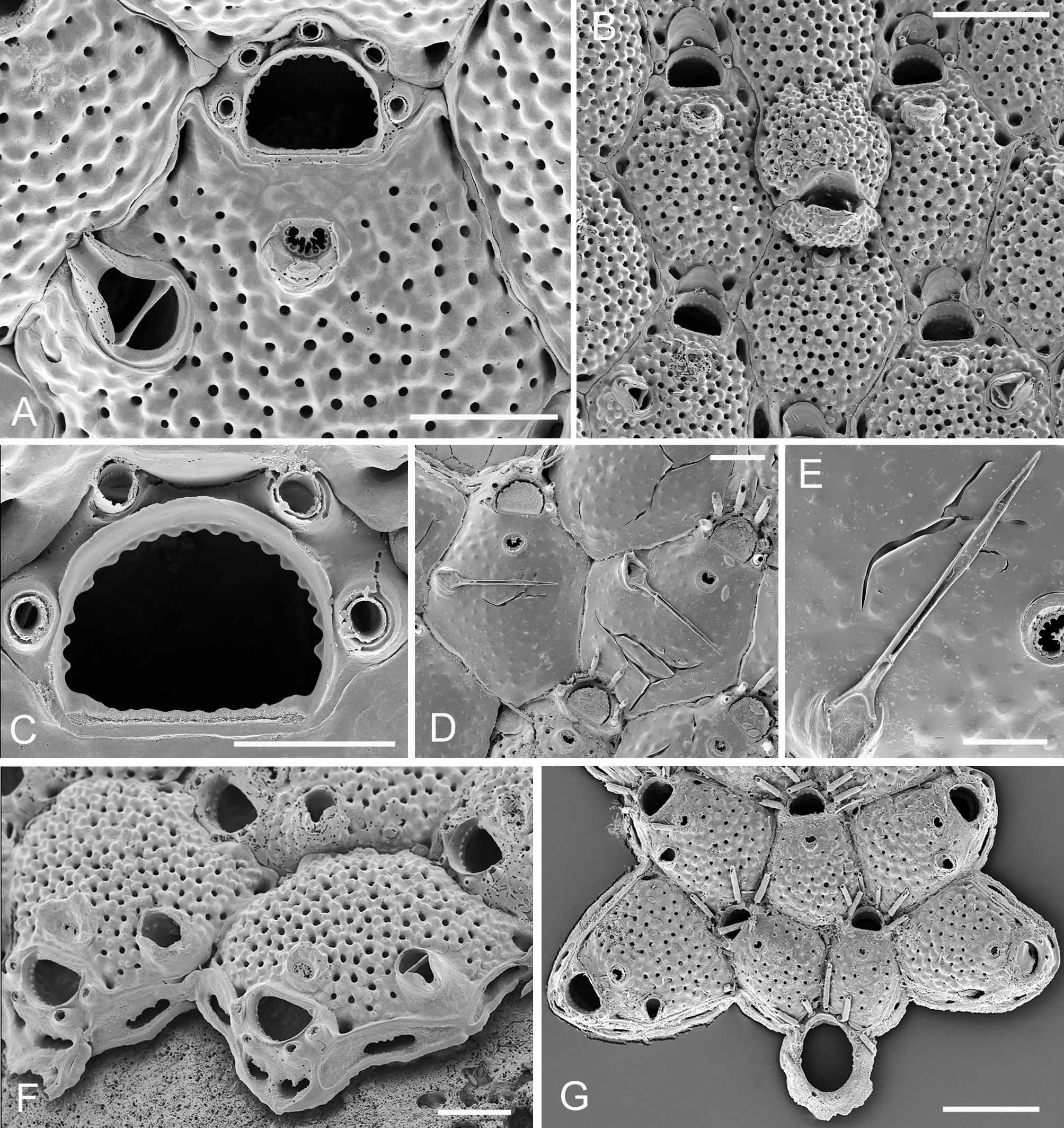