Diagnosis. Parodon atratoensis differs from all congeners in having just the first dorsal-fin ray unbranched (vs. two, except in P. magdalenensis ); two dorsal longitudinal stripes that end at adipose-fin origin (vs. ending at upper caudal-fin lobe or absent). It is distinguished from P. magdalenensis by a series of transverse dorsal bands ending at adipose fin (vs. ending at upper caudal-fin lobe or absent); in having the axillary scale 2-3 normal scales in length (vs. usually one, rarely two scales in length; except in P. buckleyi ). It also differs in the number of cusps on the premaxillary teeth (12-13 vs. 15-19 in P. carrikeri ; 7-12 in P. bifasciatus ; 9-12 in P. pongoensis ). It can be differentiated from P. guyanensis by the number of teeth on the premaxilla (4 vs. 5) and from P. pongoensis and P. moreirai by the presence of a lateral band with projections above and below (vs. absence of projections in such band) and the number of scales in the lateral line (37-38 vs. 40-42 in P. moreirai ). From P. suborbitalis it is distinguished by the number of cusps on premaxillary teeth (12-13 vs. 15-17); number of branched pectoral-fin rays (12-13 vs. 14-17); preanal scales (23-24 vs. 24-27); two light dorsal stripes uniting at adipose fin (vs. stripes ending at upper caudal-fin lobe) and transverse dorsal blotches ending at adipose fin (vs. dorsal blotches ending at base of upper caudal-fin lobe). From P. hilarii it differs by the absence of spots above lateral stripe (vs. present); the number of preanal scales (23-24 vs. 24-28). It differs from P. nasus by the presence of elongated projections of the lateral stripe (vs. rounded projections) and the number of cusps on premaxillary teeth (12-13 vs. 13-15).

Premaxillary hemiseries with four teeth in straight line, each tooth with straight ventral margin and 12-13 small cusps; these teeth fit into space in lower jaw. Maxilla with one or two multicuspid teeth, smaller than those on premaxilla and often half buried in soft tissue. Lower jaw with one to three lateral, outwardly-curved teeth, not visible when jaw closed.

Color in alcohol. Snout and head usually uniformly brown, not lighter below eye (one 98.4 mm SL individual with lighter colored infraorbitals two and three). Dorsum of body with series of light brown transverse blotches that begin one scale posterior to tip of supraoccipital process and continue to adipose-fin base, delimited on both sides of body by two light brown stripes of at least two scales in width, that begin on snout or behind supraoccipital and extend posteriorly to unite at adipose fin. Body base color dark yellow. Dark lateral stripe zigzag with 13-15 very short points, most conspicuous in individuals smaller than 85 mm SL; no additional blotches or bands observed above zigzag stripe. Lateral stripe continued onto middle caudal-fin rays.

Sexual dimorphism. Few breeding tubercles observed in males, usually only on anterior part of snout. In one male, 107.5 mm SL tubercles present from snout to supraoccipital.

Etymology. This species, Parodon atratoensis , is named in reference to its type-locality, the Atrato River, northwest Colombia.

Comments. Román-Valencia (1990) reported Parodon suborbitalis from the Atrato River drainage. In this study, we re-examined two specimens he used (ICN 1584) and confirm that they are the new species described here as P. atratoensis . They are distinguished from P. suborbitalis by the following characters: number of cusps on premaxillary teeth: 12-13 (vs. 15-17); number of branched pectoral-fin rays 12-13 (vs. 14- 16); one simple dorsal-fin ray (vs. two); preanal scales 23-24 (vs. 24-27); spots above lateral stripe absent (vs. present); two light dorsal stripes uniting at adipose fin (vs. stripes ending at upper caudal-fin lobe) and transverse dorsal blotches ending at adipose fin (vs. dorsal blotches ending at base of upper caudal-fin lobe). Parodon suborbitalis is found in the Lake Maracaibo and is absent from Pacific Colombian coastal drainages. Reports of P. suborbitalis by Eigenmann (1922) and Maldonado et al. (2005; 2006) from the Atrato were also based on specimens of P. atratoensis .

Parodon atratoensis shows little overlap in meristic characters with P. suborbitalis , so even though our sample size is small have found supporting evidence for us to diagnose those specimens as a new species, the only valid parodontid species known to date from the Atrato River drainage. 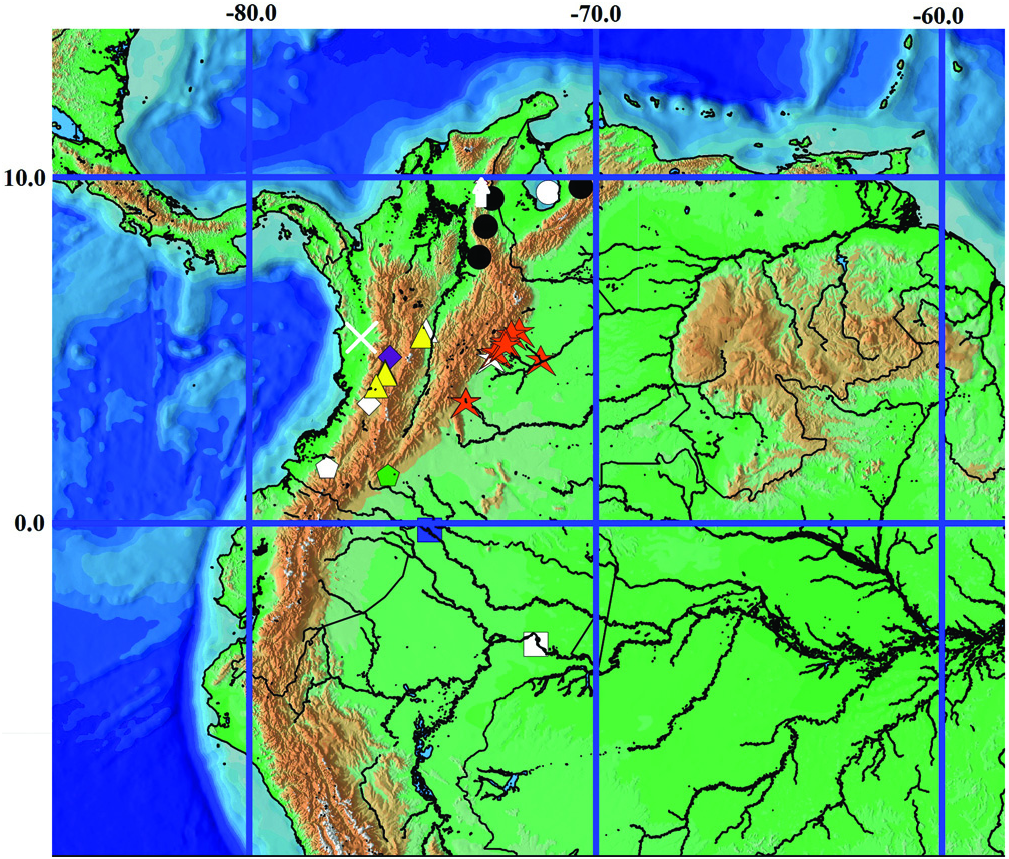