Type-material: Digitized photos of syntype spores were deposited in the parasitological collection of the Museum National d’Histoire Naturelle ( MNHN), Paris, Coll. No. ZS 127.

Vegetative stages. Trophozoïtes were sub-spherical to pyriform ( Figs. 5View FIGURE 5 A,B), floating freely in the bile. Some live trophozoïtes were seen with a long pseudopodia, extending on all it periphery and containing numerous refractile granules and inner generative cells ( Fig. 5View FIGURE 5 A,B). Monosporic plasmodia (n = 30), measuring 23.1 ± 3.25 (18–27) µm in length and 38.94 ± 5.72 (32–48) µm in width. Each plasmodium presented one spore which the extreme part of each shell valves are twisted and surrounded with very granular endoplasm ( Figs. 5View FIGURE 5 D,E).

Among the Ceratomyxa  spp. reported from the Mediterranean Sea and throughout the world and under consideration of the morphological and measures characteristics of the studied species, several species seem superficially closer to the current finding. These species are: C. arcuata Thélohan, 1892  described in different hosts and localities (see Table 5). C. elongata  (syn. C. lepidopusi  , see Gunter & Adlard 2010), C. subtilis Meglitsch, 1960  found in the gall bladders of Lepidopus caudatus (Euphrasen, 1788)  and Coelorhynchus australis (Richardson, 1838)  respectively from New Zealand waters, C. rohdei Moser, Kent & Dennis, 1989  found in the gall bladder of Petroscrites fallax (Smith-Vaniz, 1976)  from Australia, C. durusa Aseeva, 2003  described from the gall bladders of Limanda aspera (Pallas, 1814)  and L. herzensteini  ( Jordan & Snyder, 1901) in Russia (Sea of Japan) and C. anko Freeman, Yokoyama & Ogawa, 2008  found in the gall bladder of the Lophius litulon  ( Jordan, 1902) from the Pacific coast of Japan (see Table 2).

Comparative study of morphological and morphometric characteristics of the spores and polar capsules with the mentioned above species shows that the present species distinguishes from C. arcuata  by having thicker spores with two shell valves narrower toward their ends compared to those of C. arcuata  . The spores of C. elongata  and C. durusa  appear to be much thicker than those of isolate species and their polar capsules are ordinarily spherical on the contrary to the present form. For C. subtilis  , only the shape of spore is closely similar to recent species, however no measurements overlap between both species. The spores of C. rohdei  are shorter in length and possess two spherical polar capsules while those of the current species are pyriform. the recent finding is separated from C. anko  by having two polar capsules pyriform while those of C. anko  are typically spherical. Besides, the valves of the present isolate are narrower than those of C. anko  . In light of these differences with closely related species, we believe that present myxozoan under study found infecting the gall bladder of S. scriba  , is a morphologically a distinct species reported by the first time in S. salpa  from the Mediterranean Sea.

During this study, infection by Ceratomyxa  sp. 2 was observed only at Gulf of Tunis. The overall prevalence is 8.8 %. This myxosporean has a parasitic status as satellite species. Infection by C. sp. 2 started from March to August. Prevalence and mean intensity values fluctuated with months and the maximum rate of infection was noted in April and July with 20 % (see Table 4). Overally, the mean intensity was moderate with 98.5 ± 25.7 spores per infected fish ( Fig. 10View FIGURE 10).

Type-material: Digitized photos of syntype spores were deposited in the parasitological collection of the Museum National d’Histoire Naturelle ( MNHN), Paris, Coll. No. ZS 128.

In Mediterranean Sea, Ceratomyxa  sp. 3 shows morphological resemblances to four species of Ceratomyxa  which are C. pallida Thélohan, 1895  described from the gall bladders of S. salpa  and B. boops  in France, C. puntazzi  and C. sp 1 Alama-Bermejo, Raga & Holzer, 2011 described from the gall bladders of Diplodus puntazzo (Walbaum, 1792)  and Sparus aurata (Linnaeus, 1758)  respectively in Spain and C. filamentosi Kalatzis, Kokkari & Katharios, 2013  described recently from the gall bladder of Aulopus filamentosus (Bloch, 1792)  in Greece (Cretan sea) (see Tables 3 and 5). The comparison between mentioned above species and current isolate proves that all the measurements of C. pallida  , C. puntazzi  , C. filamentosi  and recent species overlap, however, the difference between all of these species and the present finding is transflated in the shape and the place of sporoplasm within current spores whose does not occupy the entire spore cavity. Besides, the only species that has a disporic plasmodia as recent form, is C. puntazzi  that characterized by plasmodia with very granular protoplasm and motile pseudopodia-like filopodia which are both lacking at current species. In addition, the present finding differs from C. sp. 1 ex S. aurata  by having spores larger in length and much thicker.

In others areas around the world, the recent species is superficially similar to C. moenei Meglitsch, 1960  found in the gall bladder of Polyprionum moene (Phillips) from New Zealand, C. seriolae Yokoyama & Fukuda, 2001  found in the gallbladder of Seriola quinqueradiata (Temminck & Schlegel, 1845)  from Japan, C. azonusi Asseva, 2003  found in the gall bladder of Pleurogrammus azonus  ( Jordan & Metz, 1913) from Russia (Sea of Japan) and C. milleri Gunter, Whipps & Adlard, 2009  found in the gall bladder of Lutjanus fulviflamma (Forsskål, 1775)  from Great Barrier Reef ( Australia) (see Table 3). From the first evaluation, it was clearly that recent isolate is differentiated from all 4 species by the shape and place of sporoplasm inside the spore. Furthermore, C. moenei  has a posterior margin that is more strongly concave than that of the present species. C. azonusi  differs from current finding by having a pyriform polar capsules while those of the present species are typically spherical. The spores of C. milleri  appear to be thinner than those of the current species besides no measurements overlap between both species. The spores of C. seriolae  are shorter in length and have a smaller polar capsules compared to those of recent form. Therefore, taking account all the revealed differences with closely related congeneric species, the present myxosporean has a dissimilar morphological characteristics and it designated as a different species, not previously identified in S. salpa  from the Mediterranean Sea.

During this study, the overall prevalence is 3 %. This myxosporean has a parasitic status as scarce species. Infection by Ceratomyxa  sp. 3 was restricted only in Bay of Bizerte and this species was detected only in May with prevalence 33.3 % and mean intensity 35.5 ± 8.4 spores per infected fish (see Table 4). 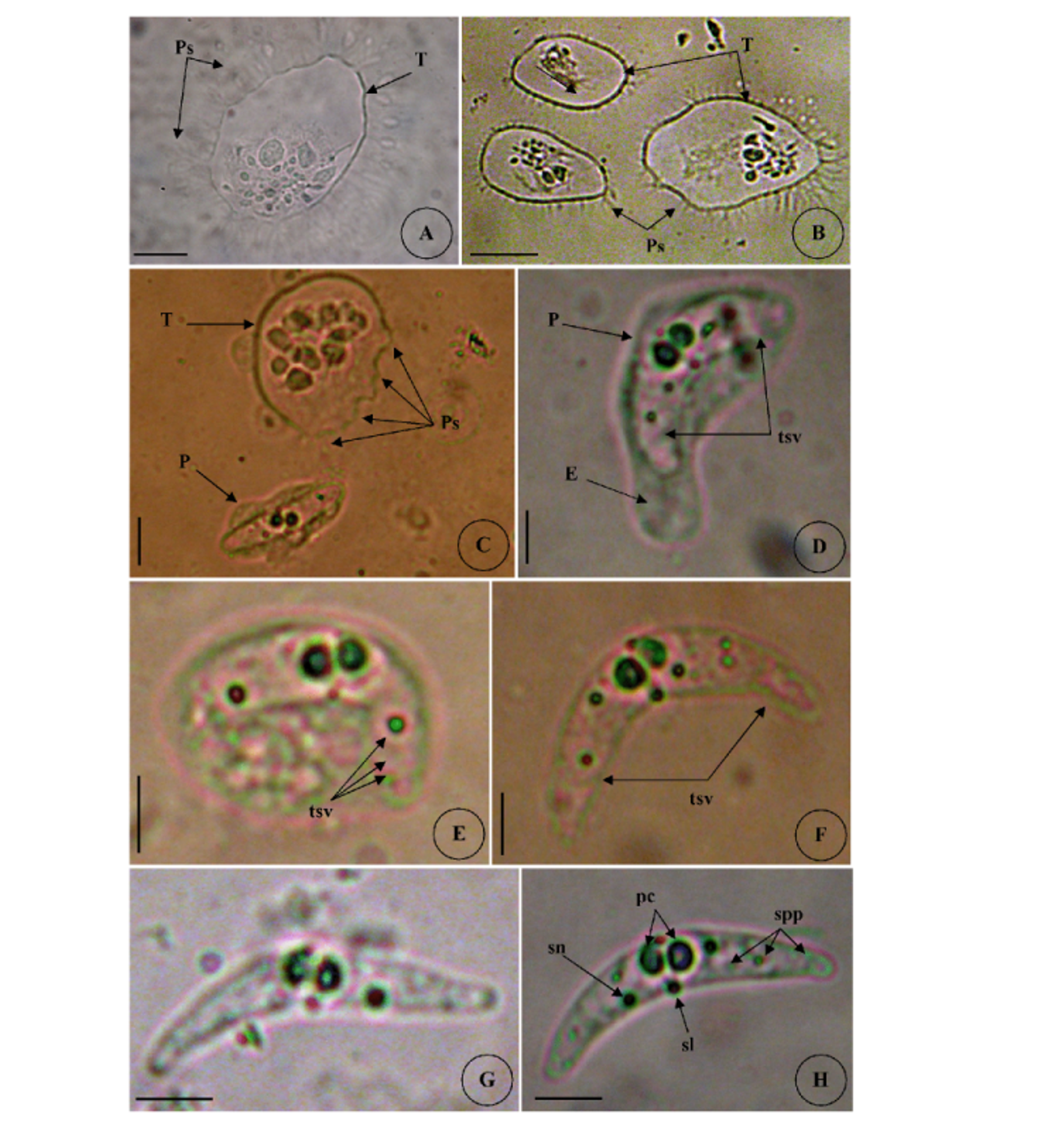 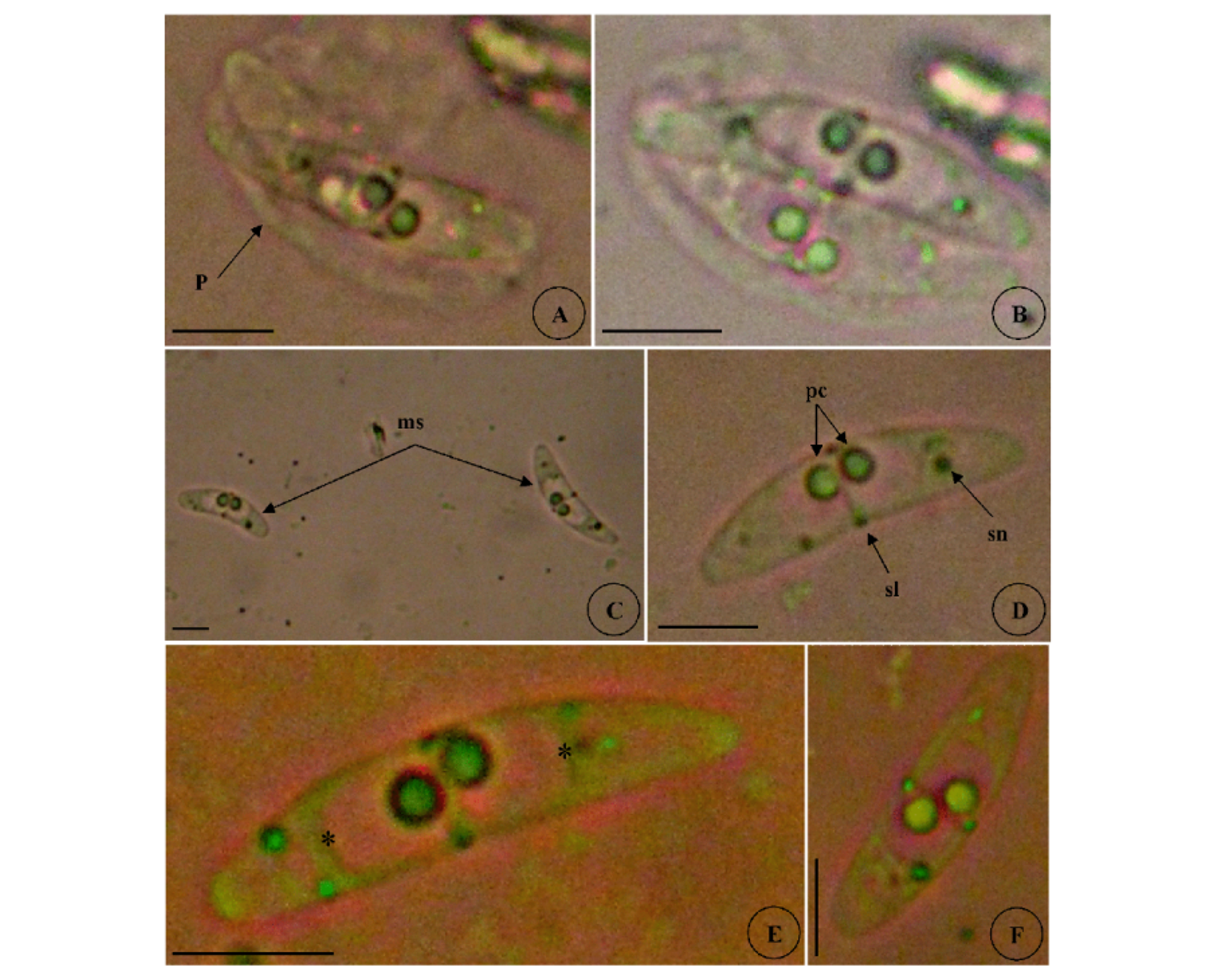 FIGURE 6. Photomicrographs of Ceratomyxa sp. 3 from the gall bladder of Sarpa salpa. (A – B) Live disporic plasmodia (P). (C – E) Fresh mature spores (ms) in sutural view showing clearly the distinct spherical polar capsules (pc), the straight suture line (sl) and the distribution and the edge of the sporoplasm into the spore cavity in both sides (*). (F) Mature spore in apical view. Scale bar = 10 µm. 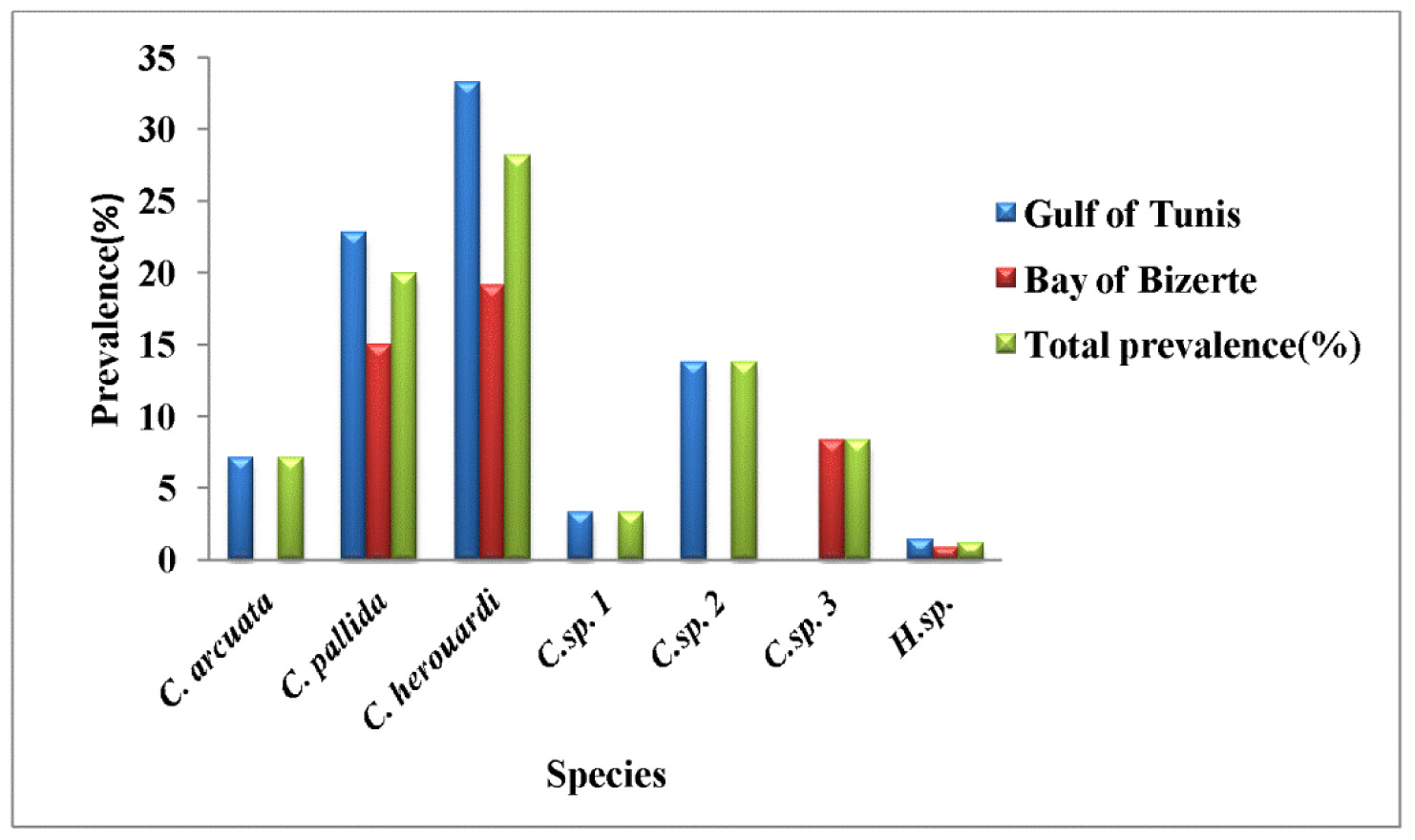 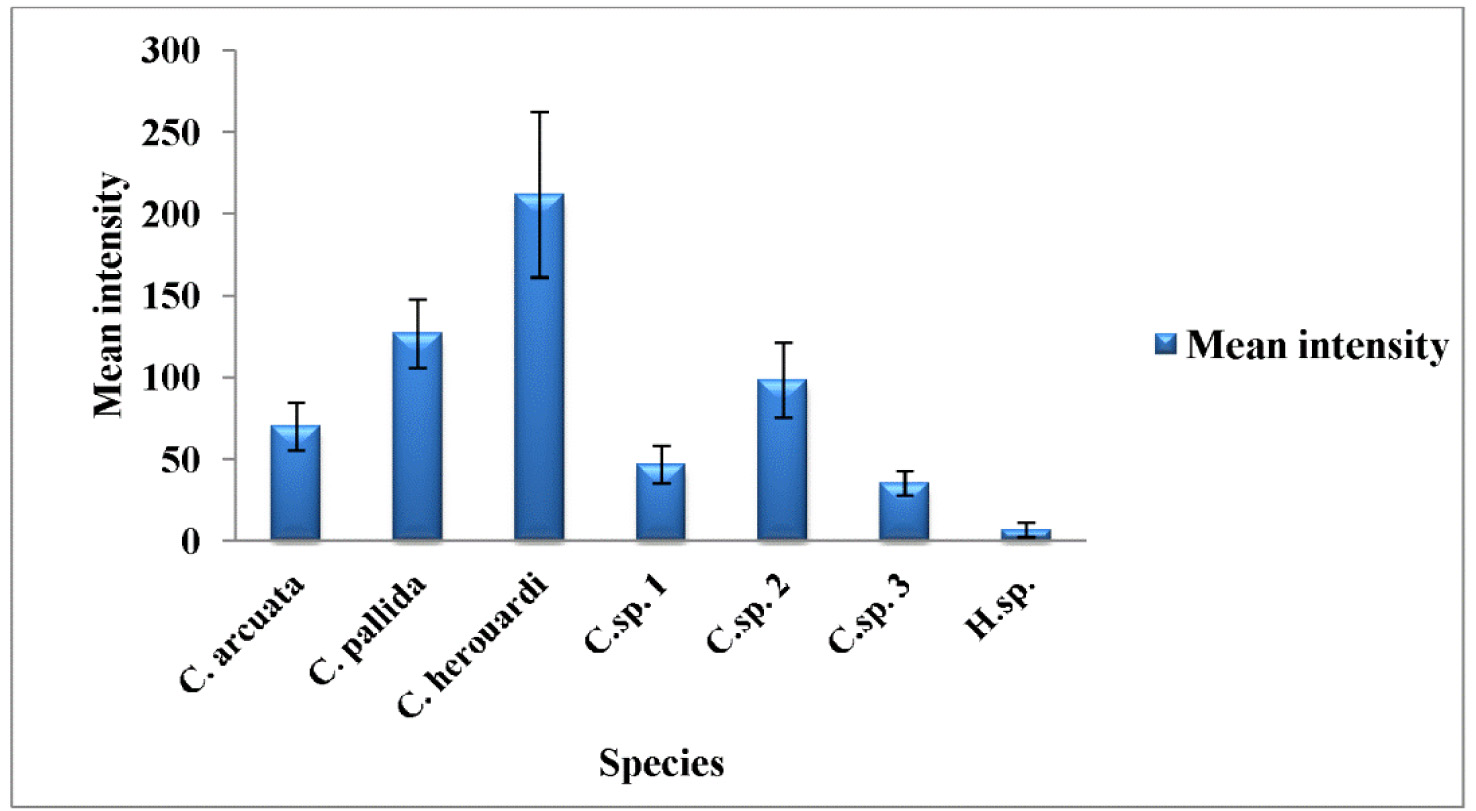 TABLE 2. Comparison of the spore measurements of the present Ceratomyxa sp. 2 with taxonomic affinities species (measurements are in micrometer).