Comparisons with other species

Tail with regenerated distal half, rather narrow base (TW/SV = 0.084), tapering to a blunt point, with single row of enlarged subcaudals throughout original portion. Cloacal sacs small, with small external orifices situated near lateral margins of vent. Scales of tail small, flat, smooth, subimbricate; with five rows of enlarged tubercles dorsally, decreasing in prominence posteriorly; one or two small, flat postcloacal spurs on each side of tailbase.

Color in preservative: Dorsal ground color light brown with a pale salmon cast, with one chocolate­brown chevron on nape whose lateral arms extend forward to behind each eye, these followed by three wide bands of same color on body and three more on anterior half of tail. Dorsal bands with irregular margins, narrowed laterally and expanded middorsally, and with margins outlined in darker brown. Last band on body narrowly partitioned vertebrally by ground color and anterior two partially partitioned ( Fig. 1View FIGURE 1 a). Top of head, limbs, and interspaces between bands with obscure darker brown mottling. Tubercles generally lighter than dorsal colors and, hence, appearing conspicuous. Labials white with some brown dusting, especially anteriorly. Narrow white border between ear and eye along lower margin of each lateral arm of the anterior dark chevron. Ventral scales light with medium­brown stippling, imparting to the ventrum an overall dirty appearance.

The trivial epithet is the local name for Woodlark Island and is a noun in apposition.

We collected the holotype at night in a large, strangling fig ( Ficus  sp.) in a patch of disturbed lowland forest about 500 m from the coast, along a disused road constructed during WWII ( Fig. 3View FIGURE 3). The forest, which was growing on limestone substrate, had large open patches in various stages of regeneration from swidden agriculture. Tree ferns ( Asplenium  spp.) and other epiphytes were common in the tree crowns and many of the tree trunks were covered with vines (particularly Monstera  sp.). The fig on which the lizard was collected was the largest tree in the area, with a dbh of about 1 m and a height of 25– 30 m.

We first observed the lizard in the early evening, around 1900 h, on the trunk of the tree about 4 m above the ground. When illuminated with our head lamps it began actively moving up and down the trunk about 4–6 m above the ground while waving its tail back and forth. We pursued it for about five minutes until it disappeared into a crevice. It was again emergent when we returned to the tree 30 minutes later and we were able to climb into the tree and capture it. We actively looked for more on this and subsequent nights but saw none. McCoy (2000) reported that the related Cyrtodactylus louisiadensis  is often observed in strangling figs in the Solomon Islands. 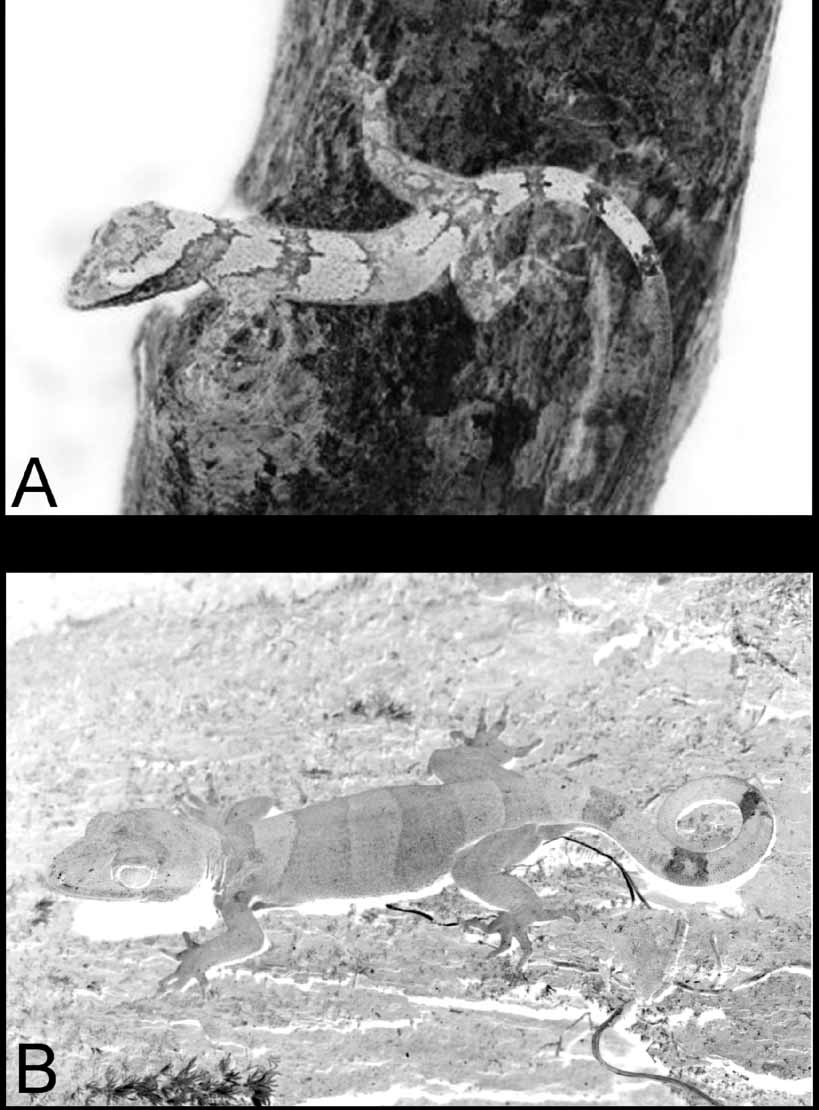 FIGURE 1. Photograph of (A) holotype of Cyrtodactylus murua, BPBM 17858, from Woodlark Island, and (B) C. louisiadensis from Sudest Island, in life. Photos by A. Allison and G. Shea, respectively.

FIGURE 1. Photograph of (A) holotype of Cyrtodactylus murua, BPBM 17858, from Woodlark Island, and (B) C. louisiadensis from Sudest Island, in life. Photos by A. Allison and G. Shea, respectively. FIGURE 3. Photograph of the type locality. The holotype was collected ca. 4 m above the ground from the trunk of the strangling fig in the center of the photo, just to the right of the road. Note the Monstera sp. vines (left foreground) and the epiphytic Asplenium sp. ferns (center and right center) which were common in the forest. Photo by A. Allison.