Pharynx muscular, with a cylindrical procorpus, metacorpus somewhat swollen, isthmus well defined, basal bulb slightly enlarged. The maximum diameter of metacorpus is equal to that of basal bulb. Nerve ring surrounds anterior portion of basal bulb. The excretory pore opening located slightly anterior to nerve ring. Lateral fields and phasmids not observed. Gonad single, reflexed. Spicules paired with a light brown color, moderately curved. The spicule length/width of the mature male is about 5.2 ( Fig. 3View FIGURE 3 A and B). Spicule head longer than wide with length/ width ratio of about 1.7 (1.5 –2.0). Lateral and dorsal limb distinct, starting from head and extending to the spicule tip. Ventral limb starts from head and end well before the spicule tip. The tip of spicule blunt, bearing an aperture located on the tip with a circular shape and a slit-like concave located on the ventral side of the blade closed to the tip ( Fig. 3View FIGURE 3 D). This character was observed clearly in all of 4 specimen in posterior and ventral view (the only position that enables this character to be observed) among about 20 dissected spicules examined under SEM. Velum moderately developed, starting from anterior portion of ventral limb and ending at the tip of the ventral limb. Gubernaculum is boat-shaped in lateral view. In ventral view, it tapers anteriorly and ends at a slightly enlarged, ventrally bent head ( Fig. 3View FIGURE 3 E and F). Cuneus is needle-shaped and short. Spicules of the young males ( Fig. 3View FIGURE 3 C) are slightly different from those of the mature ones ( Fig. 3View FIGURE 3 A and B). Twelve pairs and a single precloacal genital papillae distributed in a pattern showed in Fig. 1View FIGURE 1 A and E and Fig. 2View FIGURE 2 C, including seven pairs preanal papillae, one pair adanal, one pair dorsolateral and three pair postanal (two being subterminal and one subdorsal). Tail conoid and short, without mucron.

Second-generation males: Similar to that of the first generation male except that the excretory pore is located much more posterior and most morphometrics, such as spicule and gubernaculum length, are smaller. Tail conoid without mucron.

First generation female: Body C-shaped when killed by gentle heat. Cuticle smooth or with faint annules. Head rounded and slightly truncated anteriorly ( Fig. 1View FIGURE 1 B). The morphology of the anterior part and pharynx is similar to those of males. The excretory pore opening is anterior to nerve ring. Lateral fields and phasmids not observed. Gonads didelphic, reflexed. Vagina muscular and short. Vulva a transverse slit, slightly protruding from body surface and with a short double flapped epiptygma. Tail conoid, pointed, with a short projection ( Fig. 1View FIGURE 1 G; Fig. 2View FIGURE 2 B).

Type locality and host. The soil sample was collected from a rubber plantation at Xiao-jie town, Jing-hong city, Xi-shuang-ban-na district (22.01 o N, 100.47 o E), Yunnan province, People’s Republic of China. The type host of this nematode in nature is unknown as it was recovered from soil using Galleria  larvae as bait.

Type specimens and etymology. The slides of holotype (first generation male), allotype (first generation female) and paratypes of about 60 infective juveniles on three slides, 10 each of the first and second generation males and females on 20 slides (one male and one female from the same generation on each slide) of S. pui  sp. n. were deposited in the State Key Lab for Biocontrol ( SKLB), School of Life Sciences, Sun Yat-sen University, Guangzhou 510275, China. Additional paratypes (one each of the first and second generation male and female and about 20 IJs on three slides) will be deposited in the Nematode Collection of the Department of Agriculture, USA. Living infective juveniles are also preserved in liquid nitrogen in the nematode collection of SKLB, Zhongshan University.

This species is named after the late Professor Zhelong Pu, a distinguished scientist in the area of biological control and the founder and first director of SKLB, Sun Yat-sen University.

Molecular characterization. The lengths of ITS and partial 28 S rDNA of S. pui  sp. n. amplified using the above mentioned primers were 977 bp (235 A, 255 G, 291 T and 195 C) and 800 bp (193 A, 247 G, 196 T and 164 C), respectively. The phylogenetic tree of the partial 28 S rDNA ( Fig. 4View FIGURE 4) shows that S. pui  sp. n. forms a monophyletic group with S. khoisanae  , S. longicaudum  , S. guangdongense  , S. scarabaei  and S. hermaphroditum  . This is a subgroup of the S. glaseri  group that comprises EPNs with long IJ body and adopted a cruiser host finding strategy ( Campbell et al., 2003). The sequence alignment of the S. pui  sp. n. group ( Fig. 5View FIGURE 5) shows that it has 22 diagnostic characters (= number of base pairs, in the same column of the alignment, present in one sequence but not in others) in the group and differs from its closest nematode, S. khoisanae  by 33 characters while there are only 11 different characters between S. guangdongense  and S. longicaudum  . Pairwise distances ( Table 2) clearly differentiate it from all other nematodes in the group. The phylogenetic tree of the rDNA ITS regions ( Fig. 6View FIGURE 6) support the relationship of S. pui  sp. n. with other Steinernema  species revealed by the partial 28 S rDNA sequences. The pairwise distances of the ITS sequences ( Table 3) can also be used to differentiate the new species from other nematodes in the group.

Diagnosis. S. pui  sp. n. is characterized by its unique nucleotide sequences of either the partial 28 S rDNA or the rDNA ITS regions. Morphologically, it is characterized by the combination of the features of various developmental stages of the nematode. For IJs, the combination of the following characters: body length (1004 ± 75 μm); distance from anterior end to excretory pore (85 ± 4 μm), to the base of pharynx (114 ± 8 μm); tail length (69 ± 5 μm); E% (77 ± 4.5); lateral field with eight evenly distributed and identical ridges at the middle body portion; and tail short and attenuate with a hyaline portion occupying 40–50 % of the tail length can be used to differentiate the new species from other Steinernema  species. For the first generation males, the new species can be recognized by spicule length (84 ± 4 μm, measured along the arch); GS (0.74 ± 0.04); SW (1.52 ± 0.10); D (77 ± 5.8); spicule possesses an aperture on the tip and a pit on the ventral side of the lamina close to the tip; gubernaculum with a short needle-shaped cuneus; tail conoid and short without mucron. For female, S. pui  sp. n. is recognized by a conoid and pointed tail with a short mucron on the tip and a slightly protruding and symmetrical vulva with a short double flapped epiptygma. 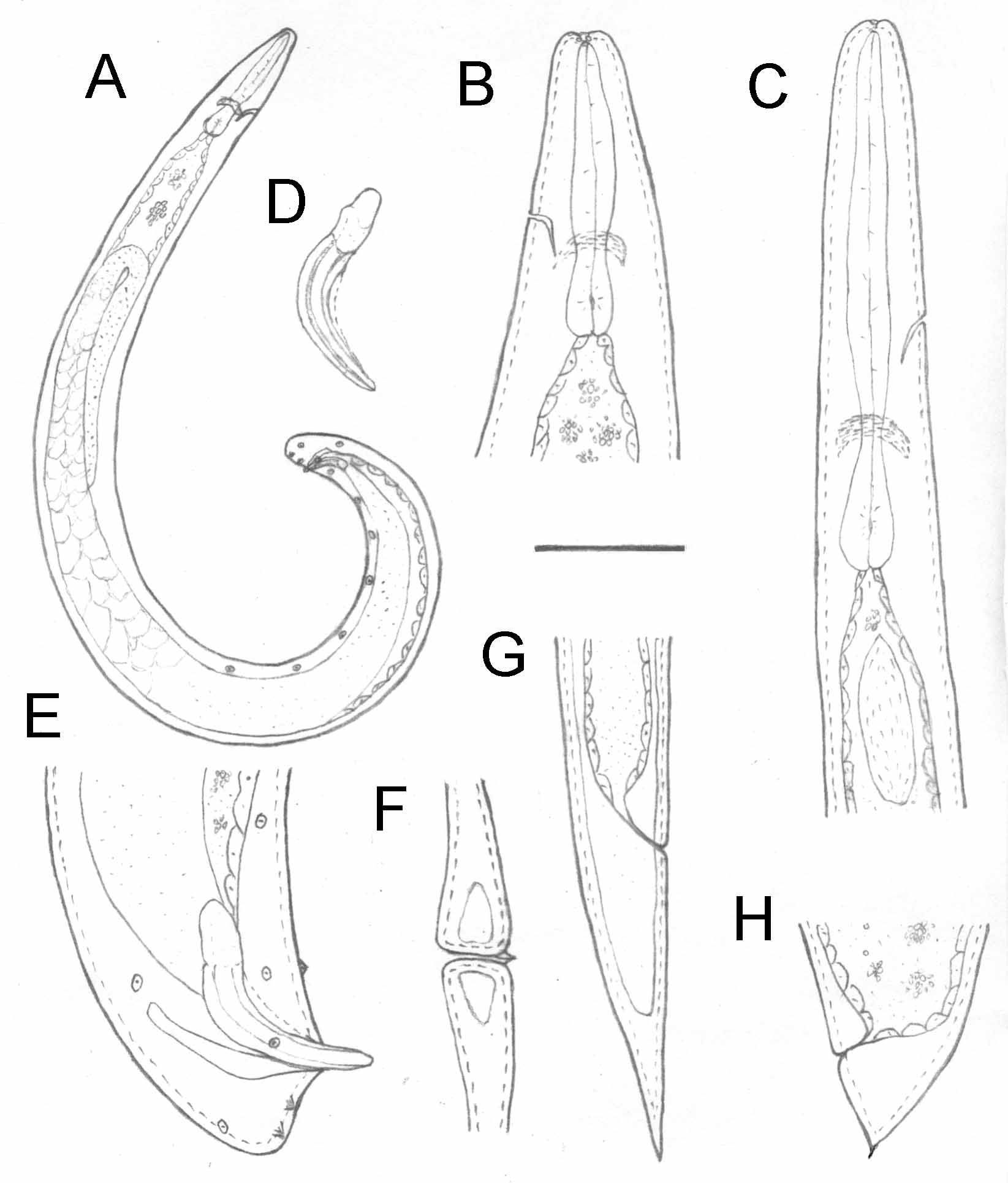 FIGURE 4. Phylogenetic relationship of Steinernema pui sp. n. with other Steinernema species based on the D 2 D 3 domain of 28 S rDNA sequence. 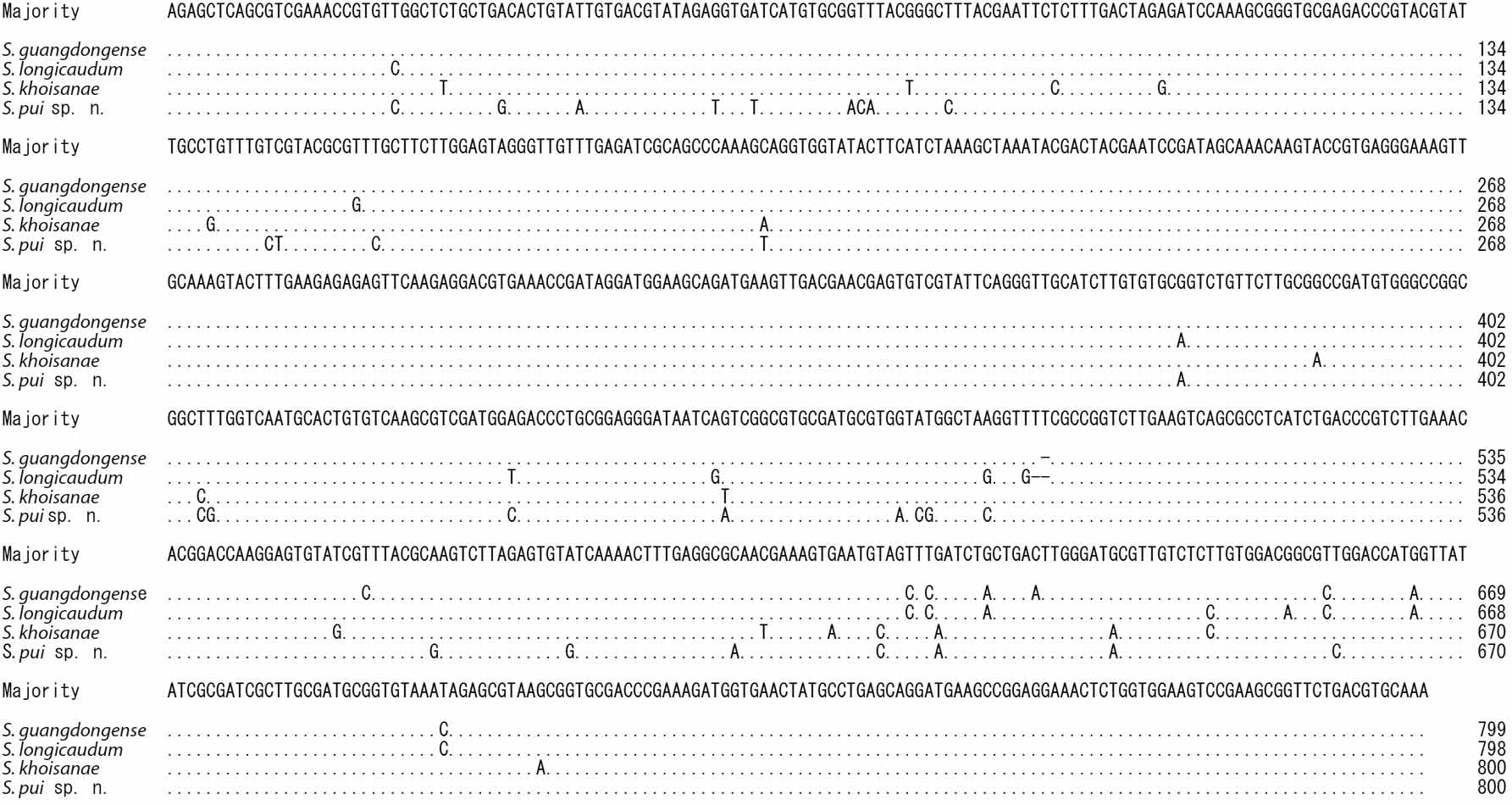 FIGURE 5. Alignment of the D 2 D 3 domain of 28 S rDNA sequence of Steinernema pui sp. n. with those of closely related Steinernema species. FIGURE 6. Phylogenetic relationship of Steinernema pui sp. n. with other Steinernema species based on rDNA sequence of the internal transcribed spacer regions.