Diagnosis. Cladorhizidae in a single axis, with bottle-brush filament arrangement, three classes of styles, arcuate isochelae, two abyssochelae, one of which is nearly spherical, sigma and sigmancistra.

Description. Eight fragments of a straight or slightly curved single axis, preserved either in ethanol or dry, all incomplete. The larger specimen ( Fig 3A View FIGURE 3 ), designated as the holotype, 103 mm long, broken at the tip, has a slightly enlarged fixation base, 3 mm in diameter. The axis, bare along the first 15 mm, is slightly flattened, 2 mm wide by 1.5 mm thick. It bears numerous filaments, 2–5 mm long, on the larger side. The other specimens are 15 to 60 mm long, with the same characteristics, but are poorly preserved. The lateral filaments attain a length of 5 mm in some fragments and end in a diverging bouquet of spicules when well preserved ( Fig 3D View FIGURE 3 ). All the specimens have a line of short conical spines on a small crest in the middle of the axis, made of styles 1 ( Fig 3E View FIGURE 3 ). The holotype has a bud, 5 mm long, ending in an enlarged button. The consistency is rigid and breaks easily. The color is cream to clear brown in ethanol or dry. There is no visible aperture or canal system.

Skeleton. The main axis and the axis of the filaments are composed of tightly packed styles 1 longitudinally arranged. In the main axis, the styles most often have a blunt point, whereas those in the filaments are mostly sharp pointed, with the point directed outwardly. The diverging bouquet at the extremity of the filaments is composed of styles 1 which are less fusiform than those of the main axis and those of the axis of the filaments. A dense, irregular feltwork of styles 2 surrounds the base of the filaments near their attachment to the main axis. The small crest on the middle of the main axis and the conical spines present there are made of styles 1 with their point outwardly directed. Styles 3, short and thick, sometimes substrongyles, are the main spicule category in the attachment base. They are also present in places in the main axis, where they are irregularly arranged and generally longer than in the attachment base. The abundance of these thick styles is variable in places, or altogether absent. Given the incomplete character of all the specimens, it is not possible to ascertain if these variations in megasclere composition of the skeleton are due to the proximity to the sponge base. In places where they are well preserved, the filaments have a coating of arcuate isochelae in a Velcro-like arrangement with the alae and teeth outwardly exposed ( Fig 3F View FIGURE 3 ). This coating includes numerous sigmas and sigmancistras and a few abyssochelae 2. A similar coating is visible in places at the surface of the main axis ( Fig 3G View FIGURE 3 ), but in these areas it is made of abyssochelae instead of arcuate isochelae.

Abyssochelae 1 ( Fig 4E View FIGURE 4 ), shaft strongly curved, alae and teeth flat at the end which is nearly in contact with the opposite one, 40–53 µm, height / width ratio approximately 1.7.

Abyssochelae 2 ( Fig 4F View FIGURE 4 ), very small, nearly spherical, alae and teeth broad, flat at their ends which are nearly in contact with the opposite ones, 12.5–15 µm, height / width ratio approximately 1.1.

Living tissue and reproductive elements. The living tissue is poorly preserved. On polished sections of two fragments of the holotype, round bodies were observed, 500–625 µm in diameter, composed of densely packed, poorly distinct cells approximately 15 µm in diameter, that appear to be embryos in an early stage of development ( Fig 3H View FIGURE 3 ). They contain isochelae, 25–30 µm long with a thin shaft and short alae and teeth, which are likely a juvenile stage of arcuate isochelae. These small isochelae were not observed in spicule preparations.

Distribution and Ecology. Known only from the deep-sea near New Caledonia, around 1010–1020 m deep, on the Antigonia Seamount, Station CP4754.

Remarks. Several characteristics of this species bear amazing resemblances to A. microstrongylata sp. nov. described in this paper. The two species were collected at the same station, were found mixed in the dredge content, and were often confused in the first steps of sorting the specimens and photographing their habit. They are very similar in shape, with a plumose single axis with lateral filaments, fusiform styles 2000 µm in size, smaller styles 150–600 µm in size, with thick styles or substrongyles found in the basal holdfast and also dispersed in the axis. The microscleres also display some similarities, with similar sigmas and sigmancistras and similarly shaped abyssochelae of A. microstrongylata and similarly shaped abyssochelae 2 of A. kanaconi . These similarities first suggested that they were the same species, especially as some of the numerous microstrongyles of A. microstrongylata are often found as contaminants in A. kanaconi . However, several characteristics of the two species clearly differ: in A. kanakoni , there is no dense coating of microstrongyles, abyssochelae 1 are significantly bigger, abyssochelae 2 are present and nearly spherical, the arrangement of the filaments on the axis is less regular and there is a median line of conical spines on the axis. The similarities between these two species from the same location are nevertheless interesting to point out as they could induce confusion during the first sorting of the species.

Besides this relative problem with A. microstrongylata , the new species—which has the plumose morphology and thick substrongyles often found in Cladorhizidae and especially in Abyssocladia— is characterized by its spiculation. It appears relatively similar to A. diegoramirezensis Lopes, Bravo & Hajdu, 2011 , from southern Chile, which also has near spherical abyssochelae similar to but larger than its abyssochelae 2, and which also differs through the general shape and other characteristics of the microscleres. 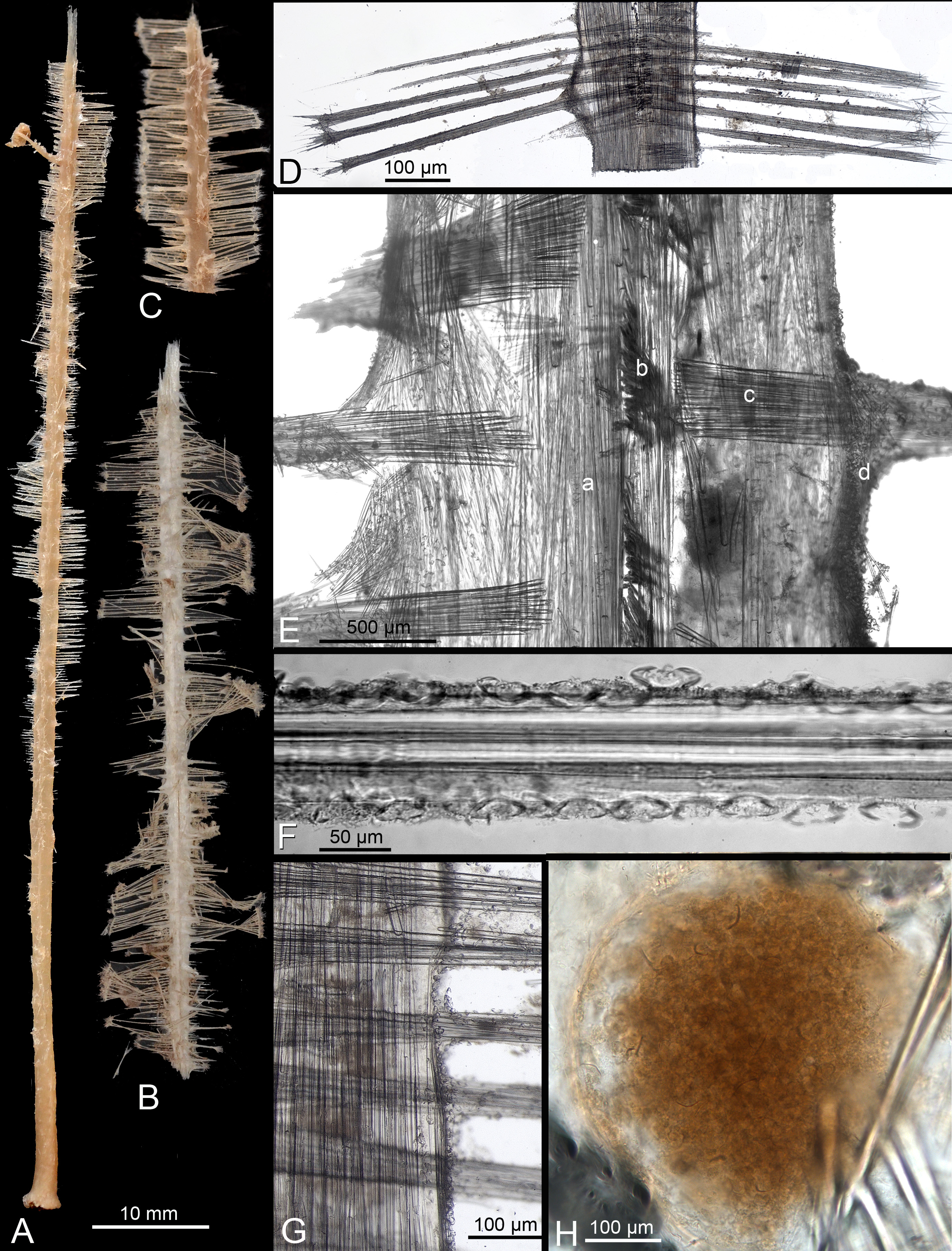