Diagnosis. Uma thurmanae  is a morphologically cryptic species that doesn’t exhibit any known fixed morphological differences from other species in the complex, but it can be distinguished from those other species both by statistical differences in morphological characters ( Table 5, Fig. 3View FIGURE 3) and in multivariate morphospace ( Fig. 4View FIGURE 4). It can also be distinguished from all other members of the U. notata  complex by nucleotide substitutions in three mtDNA loci ( Table 8).

Coloration and pattern (in life). Dorsum with an ocellated pattern. The individual ocelli are roughly circular beige markings, each with a rusty central spot and radiating lines, surrounded by black. The lateral ocelli are aligned in rows so that their black borders form broken black longitudinal lines between the rows of ocelli. Underside of torso cream-colored and unblemished except for two black ventrolateral blotches slightly anterior to the midpoint between axilla and groin. Gular region marked by five black diagonal lines oriented anterolateral to posteromedial. Limbs lighter in coloration, consisting of a light-colored background with dark brown and gray spots. Eight black markings present ventrally on the tail, beginning 17.65 mm posterior to the cloaca as a small cluster of black dots in the center of the tail, and increasing in length and width posteriorly. In preservative, dorsal coloration is yellowed, with muted contrast between ocelli and background.

Distribution. Uma thurmanae  is only known from the Mohawk Dunes, Yuma County, Arizona, USA (Figs. 1,7). The type material comes from the northern, central, and southern parts of the main dune system. The distance between our northernmost and southernmost samples is ~ 24 km. Nearly all of the probable range of U. thurmanae  falls within the boundaries of the Barry M. Goldwater Range operated by the U.S. Marine Corps, although the holotype was collected on land administered by the Bureau of Land Management on the northernmost extent of the Mohawk Dunes abutting Interstate 8 (north of the Range). While this manuscript was in preparation additional individuals of what are likely members of U. thurmanae  were observed east of the Mohawk Mountains near Dateland, Yuma County, Arizona (D. Leavitt, Arizona Dept. Game and Fish, pers. comm.). Examination of satellite imagery reveals that likely habitat for this species may extend east of the mountains through a pass in the southern end of the range (~ 32° 31’ N, ~ 113° 35’ W). Further work is needed to assess the distributional limits of this species. For this to occur, researchers would need to secure special use permits from the U.S. Air Force and/or Marine Corps to access restricted areas on this active range. Even if the range includes Dateland, U. thurmanae  is endemic to Yuma County, Arizona.

Natural History. Uma thurmanae  is a lowland, arenicolous, diurnal, insectivorous species specialized for life in windblown sand ( Fig. 8View FIGURE 8) much like other members of the Uma  clade. Its natural history is presumed to be like that of other members of the U. notata  complex ( Stebbins 1944; Norris 1958; Mayhew 1966; Stebbins 2003). U. thurmanae  (under the name U. rufopunctata  ) was the subject of an ecological study conducted at the Barry M. Goldwater Range ( Bagne & Finch 2012). The study used a System  for Assessing Vulnerability of Species (SAVS; Bagne et al. 2011) to evaluate the various wildlife species found within the bombing range in terms of their resilience or vulnerability to both climate change and military activity in order to propose efficient management strategies. Of the 23 categories for which a species could possibly be impacted by through climate change, Uma thurmanae  had an overall vulnerability score of 5.2, the fourth highest score of the 15 species evaluated. The most threatening impacts of both climate change and military activity are burrows collapsing from military vehicular activity, decrease in vegetative shade, and inhibited egg development from lack of moist sand. 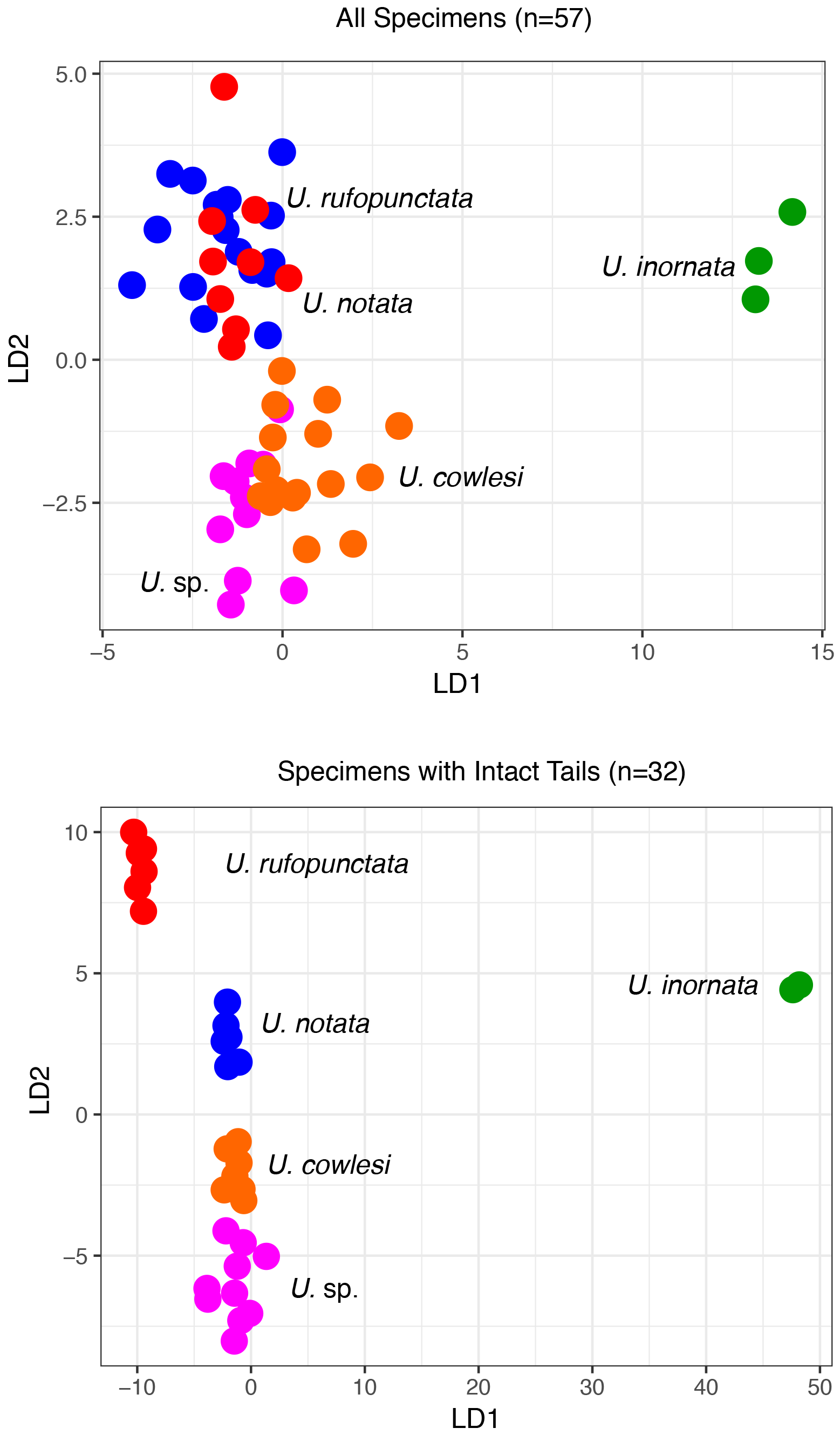 FIGURE 4. Locations of Uma specimens in the morphospace defined by the first two axes of a Discriminant Function Analysis of morphological characters. Top: when specimens with broken tails are included and TL excluded (n=57), U. inornata can still be distinguished from other OTUs, but U. notata overlaps considerably with U. rufopunctata and U. cowlesi overlaps considerably with U. sp. Bottom: analysis of only the specimens with intact tails such that tail length (TL) could be measured (n=32) allows each OTU to be distinguished. FIGURE 5. (A) Dorsal and (B) ventral view of the adult female holotype (USNM 590033) of Uma thurmanae. Photographs by E. Langan and J. Poindexter. 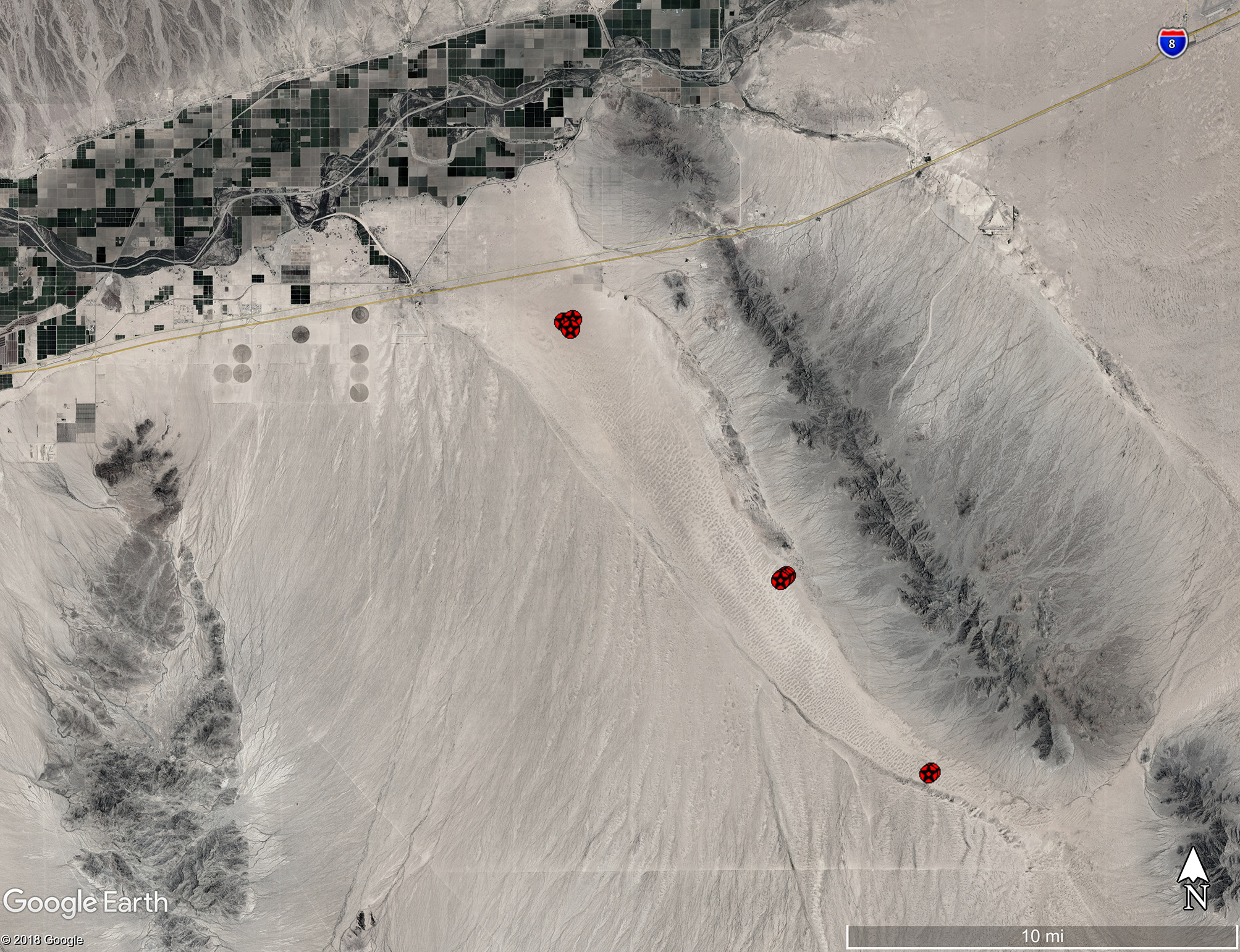 FIGURE 7. Satellite map of collecting localities for the type series of Uma thurmanae. Locations where specimens were collected, denoted by red stars, lie along the Mohawk Dunes, a long strip running northwest to southeast. The lizards are isolated in this dune system by the parallel Mohawk Mountains to the east, the Gila River and Interstate-8 to the north, and alluvial fans to the west and south, ultimately resulting in speciation. Source: “Mohawk Dunes,” 32° 34’ N, 113° 38’ W, Google Earth. Imagery date: May 29, 2016. Accessed: July 3, 2018. FIGURE 8. (A) An individual of U. thurmanae in its natural habitat. (B) Sand dune habitat of U. thurmanae (camera pointed east with the Mohawk Dunes in the midground and the Mohawk Mountains in the background). Photographs by A. Gottscho.

FIGURE 5. (A) Dorsal and (B) ventral view of the adult female holotype (USNM 590033) of Uma thurmanae. Photographs by E. Langan and J. Poindexter.

FIGURE 8. (A) An individual of U. thurmanae in its natural habitat. (B) Sand dune habitat of U. thurmanae (camera pointed east with the Mohawk Dunes in the midground and the Mohawk Mountains in the background). Photographs by A. Gottscho.