of frons and two pairs of orbital bristles; ocellar bristles rudimentary, reduced to small hairs scarcely larger than the setae in interfrontal area; the frontals close together with the lower pair incurved and the upper pair reclinate. Face short, slightly concave in median portion in lateral view, with epistomal margin produced rather prominently. Lower 2/3 of occiput swollen, upper portion sharply narrowed as seen in direct lateral view. Oral margin with a few yellowbrown setae in front and rather densely yellow setose along hind portion over genae and lower occiput. Posteroventral margin of occiput with a dense band of mixed yellow and brown hairs; also with a dense clump of dark brown hairs on posterodorsal margin of occiput immediately above cervix. Antennae as long as face, brown with median portion of 3 rd

Wings entirely covered with microtrichia and predominately brown, with hyaline marks along the margin and in the field. Vein R 4+5 setose over most of its length, the setae extending well beyond a level with m crossvein. Subcostal cell about ¾ as long as costal cell. Vein R 2+3 almost straight. The r-m crossvein situated at about apical 3/4 of cell dm, and lobe of posterior cubital cell (cup) rather short, 1/7 to 1/8 as long as vein CuA 1. Wing markings are as shown in Fig. 1 View Fig . Hyaline spots present as follows: bc with apical part hyaline, c with 2 hyaline spots separated by brown area, sc with a marginal hyaline spot; r 1 with a large squarish spot and a smaller rounded spot touching anterior wing margin, a large hyaline spot at wing apex and 5 rounded to oblong spots on posterior margin; approximately 7 small hyaline spots isolated in the field.

Abdomen mostly shining dark brown to black with median portion rufous extending from base to 6 th tergum; the rufous region extends laterally at hind margin on each segment. Sixth tergum about as long 5 th. The sterna are light brown except for brown lateral margins. The katepisternum is just

Remarks. – As the male of E. hancocki , new species, is unknown, it is not known if male front legs have a subbasal appendage on front femur as seen in E. baculigera . The two species can be differentiated by differences as noted in the key to species. In addition, the wing is less broadly rounded apically in E. hancocki , new species,vein R 4+5 does not intersect the white apical spot at the wing margin and veins R 2+3 and R 4+5 are not distinctly divergent over apical third. Although it was caught in the bamboo groves, we have no information on its host.

Etymology. – This species is named after Dr. David Hancock who has contributed greatly to the study of Tephritids in the Asian region. 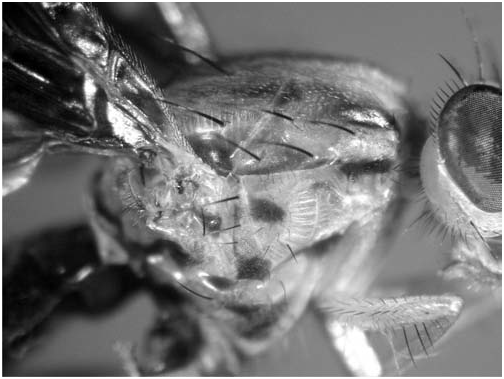