Diagnosis. A medium sized frog with long, slender fingers and large, obviously truncated finger pads. Cophixalus kulakula  sp. nov. can be distinguished from its congeners by a combination of the following characters: large size (SVL: 40–48 mm, average 43 mm), red/orange in groin and on posterior thigh (but not in axilla), fairly uniform pale or brown dorsum and flanks. The mating call is also distinct from all Cophixalus  for which the call is known, in being a short, wavering ‘bleat’.

Etymology. From kul’a kul’a, meaning ‘rocky place’ in Kuuku Ya’u, a language of the Sandbeach People of Eastern Cape York. This epithet was suggested by Mr Ronald Giblet, custodian of the Kutini clan estate in which the first specimens were discovered. The species epithet is used as a noun in apposition.

Colour pattern in life ( Fig. 3View FIGURE 3). Adults. No sexual dimorphism in colour pattern evident. Dorsal colour variable. Some individuals emerging from rock crevices were dark brown ( Fig. 3View FIGURE 3 B) and most individuals changed to this colouration in bags following capture. Individuals active on the surface of the rocks or in associated vegetation were even light brown, uneven grey-brown ( Fig. 3View FIGURE 3 C) or a fairly uniform pale putty colour ( Fig. 3View FIGURE 3 A). Diffuse, pale lumbar ocelli are present on some individuals. There is a dark canthal band from the nare to the eye, through the iris, and along the supra-tympanic fold. The upper iris is heavily speckled with gold or copper; speckling is present but less intense in the lower iris. Most individuals have a paler brown or yellowish forehead triangle and similar colouration on the eyelids. The darker dorsal colouration merges with the paler ventral colouration on the flanks. The ventral surfaces are uniformly white on some individuals, while on others they are pale with heavy grey mottling on the chin, throat, chest and forearms ( Fig. 3View FIGURE 3 D). The palms are dark. Reddish orange markings are present in the hidden parts of the hindlimbs (in the groin and on the posterior thigh and inner calf) ( Figs 3View FIGURE 3 C, 3 D). The brightness and extent of these markings varies between individuals, from very bright and discrete to more diffuse. Juveniles. Greyish brown to yellowish colour with darker mottling on the back, arms and legs. There is a yellowish brown forehead triangle, a dark canthal streak and dark markings on the loreal region, above the tympanum and on the anterior flank. Yellow lumbar ocelli are evident. The flanks and ventral surfaces are mottled grey, and the groin, posterior thigh and calf are orange.

Call. Calls were only obtained for a single individual, which was not collected. No obvious differences were heard between the calls of this individual and those calling around it. The mating call of C. kulakula  sp. nov. is a short, wavering ‘bleat’ of the following mean characteristics: dominant frequency 1.97 kHz (1.95–1.99), duration 0.38 s (0.35–0.41), pulses per call 155 (140–167), and pulse rate 411 pulses/s (381–448). Calls are uttered at an interval of approximately 8 seconds. Air temperature at the time of recording was approximately 28 ºC. Figure 4View FIGURE 4. A displays a single representative call.

The call is distinct from that of other Australian Cophixalus  (although the calls of C. pakayakulangun  sp. nov. and C. zweifeli  are not known). It is obviously different to the tapping calls of most Australian Cophixalus  (including C. saxatilis  ) and is most similar to the ‘bleat’ of C. ornatus  . The call of C. ornatus  is a loud, ‘clean’, highpitched ‘beep’, whereas that of C. kulakula  sp. nov. is relatively soft, deeper in pitch and has a wavering, ‘scratchy’ quality to it. The call is of higher dominant frequency than would be expected for body size, compared to the relationship seen across other Cophixalus  and Australian frogs in general ( Hoskin et al. 2009).

Habitat and habits. Cophixalus kulakula  sp. nov. inhabits deeply piled granite boulder habitats and its morphology is similar to that of the other three boulder-adapted Australian Cophixalus  . These species are all relatively large and have long fingers and greatly enlarged finger discs. As for the other species, C. kulakula  sp. nov. is restricted to boulder habitats. These are either boulder fields or deeply piled rock in rainforest gullies ( Fig. 5View FIGURE 5). At most sites the boulders are festooned with vegetation such as ferns, vines ( Scindapsus altissimus  and others) and umbrella trees ( Schefflera  ). The frogs emerge from deep crevices on dusk to forage at night on the surface of rocks and on associated vegetation (particularly Schefflera  ) ( Fig. 5View FIGURE 5). Some individuals were observed in the crowns of umbrella trees up to 2.4 metres above the rocks below. No other frogs were observed in boulder habitats at these sites. Analysis of C. kulakula  sp. nov. scats (removed from holding bags in the field) revealed that they feed primarily on ants; as has been found for other Australian Cophixalus  ( Hoskin 2004; Williams et al. 2006). An adult C. kulakula  sp. nov. was observed feeding on Oecophylla smaragdina  ants by picking individual ants from an ant trail. Other invertebrate groups represented in the scats were Coleoptera and Blattodea.

Cophixalus kulakula  sp. nov. were abundant at sites in February 2009, April 2010 and December 2010, with males and females being observed in approximately equal numbers. Males were calling in December but not in February and April, despite wet weather during all visits. This suggests that breeding occurs earlier in the wet season. Juveniles (approx. 25 mm) were observed at one site in April. Males were observed calling from the tops and sides of boulders. Males were calling in small groups, with males spaced several metres from each other, and such groups were widely separated despite apparently suitable boulder habitat in between. A calling male was observed to lead a female from his calling site in piled boulders to a crevice below an isolated small boulder approximately 40 metres away on the rainforest floor. The male uttered a call shorter than the mating call (described above) while leading the female. This behaviour is similar to that reported for C. ornatus  , in which males lead females some distance from a calling site to a nest site ( Zweifel 1985; Hoskin 2004; Felton et al. 2006). As for other Australian microhylids ( Hoskin 2004), C. kulakula  sp. nov. is almost certainly a terrestrial breeder. A female preserved in January contained 47 unpigmented ova of an average diameter of 2.8 mm (2.7–2.9). These eggs were all of similar size and appeared to represent one clutch. If this were the case, then this represents a substantially larger clutch size than recorded for other Australian microhylids (6– 22 eggs, average 12), including that recorded for another large boulder-dwelling species, C. saxatilis  (13 eggs) ( Hoskin 2004). 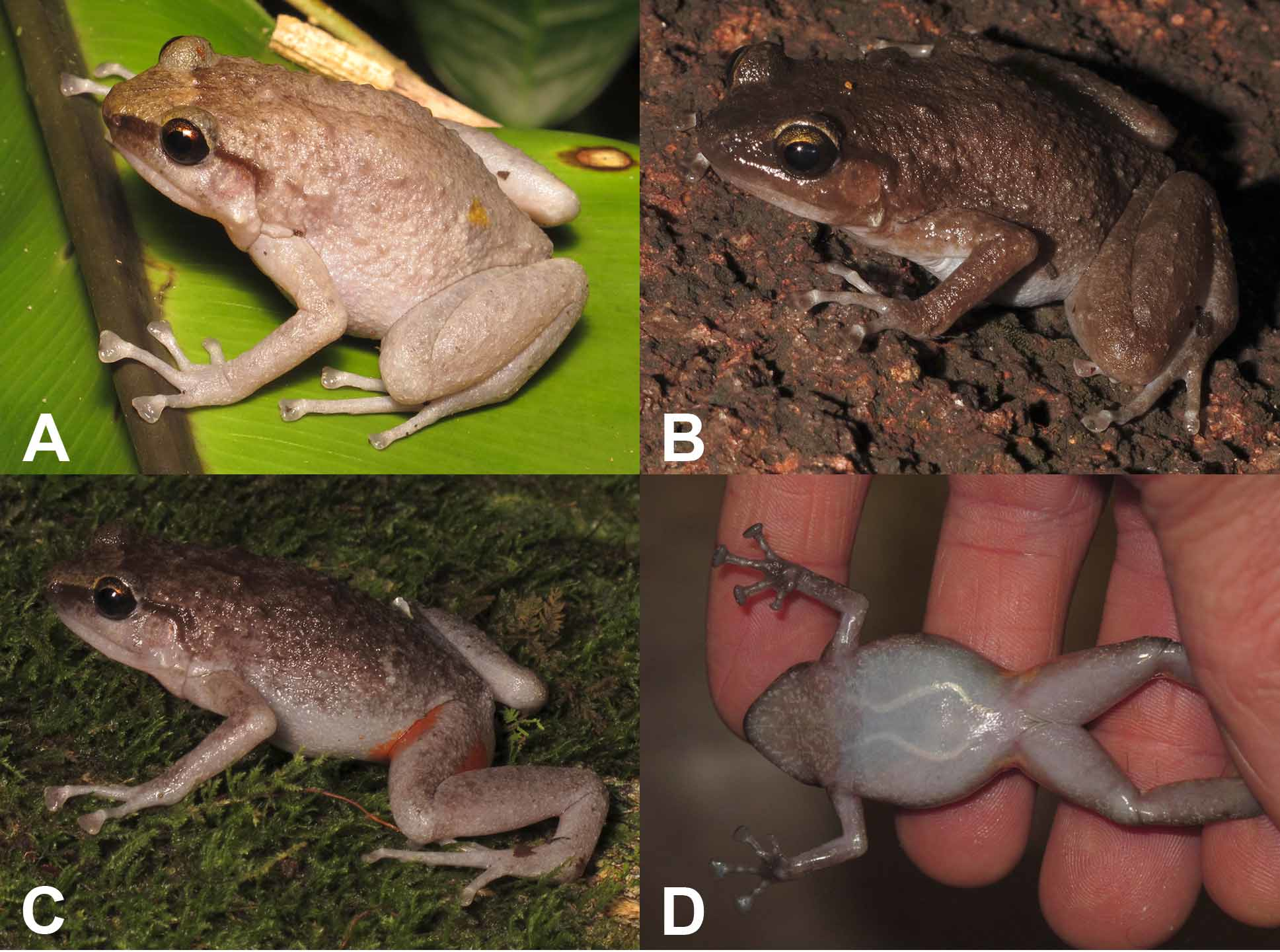