Diagnosis. Distinguished from all copionodontines, except Glaphyropoma spinosum  , by the presence of opercular odontodes (with presence variable; vs. opercular odontodes entirely absent; Figs. 2-4View FigView FigView Fig). Further distinguished from all congeners by the small eye in mid- to large-sized specimens (over 35 mm SL, 11-12% HL; vs. 13% or more; Fig. 2aView Fig); and from all except C. elysium de Pinna, Burger & Zanata, 2018  by the lack of a free orbital rim ( Fig. 2aView Fig). The combination of body coloration lacking conspicuous markings and lack of free orbital rim distinguishes C. exotatos  from all other congeners. Distinguished from C. elysium  , C. pecten de Pinna, 1992  and C. orthiocarinatus de Pinna, 1992  by the color pattern composed of a tenuous continuous and straight midlateral stripe against a uniform scattering of dark chromatophores ( Fig. 1View Fig; vs. color pattern more complex, including irregular dark markings dorsal and ventral to an irregular longitudinal stripe in C. elysium  and C. pecten  or absence of a midlateral stripe in C. orthiocarinatus  ). Further distinguished from C. elysium  by the presence of a conical ossification cap in the anterolateral corner of the second hypobranchial ( Fig. 5View Fig; vs. second hypobranchial entirely cartilaginous; this ossification is so far verified in a single c&s paratype of C. exotatos  ). Copionodon exotatos  further differs from C. pecten  by the smaller interopercular patch of odontodes, its anterior limit distant from lower lip (by distance equivalent to approximately mouth width) and posteriorly not reaching base of first ral-fin origin and rictal one extending beyond midlength of interopercular patch of odontodes ( Figs. 1-2View FigView Fig; vs. maxillary barbel reaching posterior ¼ of length of interopercular patch of odontodes and rictal reaching anterior ¼ of length of interopercular patch of odontodes). From species of Glaphyropoma  , the new taxon further differs by the broad first hypo- branchial ( Fig. 5View Fig; vs. slender; cf. de Pinna, 1992, fig. 6 and Bichuette et al., 2008, fig. 6), the caudal fin bilobed ( Fig. 1View Fig; vs. truncate), the toothed portion on dentary not reaching the coronoid process ( Fig. 6View Fig; vs. reaching coronoid process), and the presence of asymmetrical spatulate teeth in jaws ( Fig. 11View Fig; vs. all teeth symmetrically spatulate).

Dentary and premaxillary teeth somewhat similar to each other in shape and arrangement ( Fig. 11View Fig). Teeth gradually larger towards symphysis. First row of teeth spatulate and darkly-pigmented distally in dentary and premaxilla, with spatulate portion in some teeth symmetrical and others asymmetrical; spatulate portion not overlapping in lower jaw ( Fig. 11View Fig). Distal border of teeth straight. In both jaws, second row of teeth also slightly expanded distally; third row conical. Teeth on lower jaw distributed over anterior two thirds of ossification and not reaching coronoid process. Outer series of lower jaw with about six to eight spatulate larger anterior teeth followed by three to five conical teeth.

Eyes large in small specimens but small in mid- to large- -sized ones, without free orbital rim and covered with transparent skin. Eyes located slightly anterior to half of head length, much closer to lateral border of head than to midline in dorsal view. Infraorbital latero-sensory canal complete, extending from sphenotic posteriorly to first infraorbital (la- crimal) anteriorly. Three infraorbital pores, one directly posterior to posterior margin of eye, another directly ventral to ventralmost point of eye, and a third anteroventral to eye in lateral view. Anterior nares surrounded by short tube of integument directed anterolaterally, continuous posterolaterally with nasal barbel. Posterior nares slightly closer together than anterior ones, surrounded by tube of integument incomple- te posterolaterally, with appearance of two partly confluent flaps of skin. Three pairs of thin flat barbels, wide at base and gradually narrowing distally to fine tip. Maxillary barbel reaching slightly beyond base of pectoral fin. Rictal barbel inserted ventral to maxillary barbel, extending to middle of interopercular patch of odontodes. Nasal barbel originating on posterolateral region of anterior nares, reaching to middle of opercular patch of odontodes (or homologous position in specimens without latter) ( Figs. 2-3View FigView Fig). Nasal barbels shorter in juvenile specimens (12.6 and 13.1 mm SL), reaching to middle or posterior margin of eye. Interopercle with well- -developed odontodes, visible in ventral aspect of head. Interopercular patch of odontodes extending from vertical through posterior border of eye anteriorly to slightly anterior to vertical through pectoral-fin base posteriorly. Odontodes arranged in two series, with those on mesial series larger than those on lateral one; odontodes gradually larger posteriorly in both series, with those posteriorly on mesial row largest. Eight odontodes on mesial row and six or seven on lateral row. Interopercular odontodes not yet developed in two smallest specimens examined (12.6 and 13.1 mm SL). Opercular patch of odontodes variably present in two of four adults or subadult type specimens (odontodes not yet developed in two additional juvenile paratypes). Opercular odontodes vestigial in holotype, apparently lacking direct mineralized connection with opercle ( Fig. 13View Fig) yet visible on surface of skin. Patch small and inconspicuous on surface of head, located anterodorsally to pectoral-fin base, with single row of four or five small odontodes sunk in individual slits of integument. Entire patch surrounded by specialized rim of integument typical of that complex in most other trichomycterids. Specimens without opercular patch of odontodes with homologous region of head smooth, lacking both odontodes and associated integumentary modifications ( Fig. 4View Fig).

posterior to vertical through middle of dorsal-fin base. Band running exactly along midlateral line on the anterior half of SL, shifting to immediately dorsal to midline posteriorly to that. Middorsal line slightly lighter than rest of dorsum anteriorly to dorsal fin in some specimens. Abdominal region mostly white, with sparse dark fields mesial to base of pec- toral fin ( Fig. 2bView Fig).

Overall color of head similar to, and slightly denser than, that of dorsum. Region of head corresponding to skull roof darkest due to combination with underlying brain pigment. Laterosensory pores on head white. Nostrils whitish. Integument slits of individual opercular odontodes, when present, white. Ventral surface of head with scattered minute melanophores ( Fig. 2bView Fig). Fleshy outgrowth at angle of mouth white. Upper and lower lips heavily darkly-pigmented, except for white anterior margin of lower lip and inner margin of upper one. Nasal barbel uniformly dark along its entire length, on both sides. Maxillary barbel lighter than nasal barbel and gradually lighter distally, its dorsal surface darker than ventral one. Rictal barbel mostly white, with few dark fields near base. All rayed fins with sparse melanophores irregu- larly scattered alongside individual rays and segment limits. Pelvic and anal fins lighter than remaining fins. Adipose fin with uniform coating of melanophores similar to that on dorsal portion of body but looking darker because of different underlying tissues. Base of pectoral fin with rounded dark fields. Region around base of pelvic fins white. Narrow vertical white area at base of caudal fin, clearly separating origin of fin from caudal peduncle ( Figs 1-3View FigView FigView Fig).

Coloration of very small specimens (12.6 and 13.1 mm SL) similar to that of adults, but with a mostly white adipose fin and lower caudal peduncle fin-fold and no trace of a midlateral stripe.

Etymology. The specific epithet comes from the Greek exotatos  , meaning outermost, in reference to the outlying locality of the new species.

Ecological notes. The riacho do Mosquito is perennial and torrential in the rainy season, but its flow is reduced drasti- cally in the dry season. It runs on the eastern slopes of the Sincorá Range. The hydrological route of the stream at the type locality is peculiar. At approximately 12º21’59.51”S 41º22’19.37”W it splits into right and left arms. The entire right arm enters a sinkhole shortly after the split and becomes totally subterranean for ca. 500 m (in straight line, likely more as stream path; this subterranean sector is yet unmapped). The left arm remains on the surface. At the time of our sampling the entire region was undergoing the hardest drought in many years and the left epigean arm was entirely dry while the right arm maintained a small but consistent flow. The course of the two arms rejoin shortly after the emergence of the right arm, immediately before the precipitous waterfall called Cachoeira do Mosquito. Copionodon exotatos  was sampled at a point near the emergence of the subterranean sector of the right arm ( Fig. 8View Fig). That portion is the terminal part of the subterranean sector and is itself not exactly a cave, but rather a rock-enclosed portion at ground level on sloped terrain, with part of the enclosure apparently man-made and with evidence of past use of explosives. Such structures are locally known as “grunas” and are sites of past small-scale diamond mining. All specimens came from a small area some 10 cm deep, but which was the deepest portion of the stream in several square meters. The substrate was gravel, sand and solid rock. Collection and visual inspection of the riacho do Mosquito about three km both upstream and downstream from the subterranean sector revealed no copionodontines, but its uppermost sectors remain unsampled. Examination of stomach contents of one paratype (now c&s) of C. exotatos  includes allochthonous and autochthonous items, composed mainly of aquatic insects.

Conservation status. Copionodon exotatos  is known exclusively from a short (ca. 500m) and mostly underground sector of the riacho do Mosquito (tributary of the Upper rio Paraguaçu basin, within the Chapada Diamantina Domain). It is possible that during the rainy season it spreads further out in the epigean sector, but this is currently unknown. The reduced flow of water in the dry season makes that stream particularly vulnerable to any pollutants and is associated with the entrenched distribution of the species, which in turn results in an obviously vulnerable situation. The environment of the species has well oxygenated fast-running clear water running over nude rocky bottom with patches of sand. The apparently narrowly endemic nature of the species makes it (and remaining copionodontines) dependent on the preservation the delicate headwaters they inhabit. The reduced flow of water in the dry season, and the use of water for human consumption and livestock in addition to deforestation of the banks constitute threats to the species, resulting in an obviously vulnerable situation. This, along with the absence of studies on population biology and geographical range reductions for this species allow us to classify C. exotatos  as Data Deficient (DD) according to the International Union for Conservation of Nature (IUCN) categories and criteria (IUCN Standards and Petitions Subcommittee, 2017).

Remarks. Because no specimens of C. exotatos  were found either upstream or downstream of the subterranean sector of the riacho do Mosquito, it is likely that most of the population of the species resides inside the subterranean portion, yet unsampled. In that case, the type specimens of C. exotatos  were probably rogue specimens roaming close to the limits of their subterranean habitat, at the beginning of the outflowing epigean sector. Collection of more abundant ma- terial of the species, from throughout its range, will require speleological exploration of the Mosquito Cave. 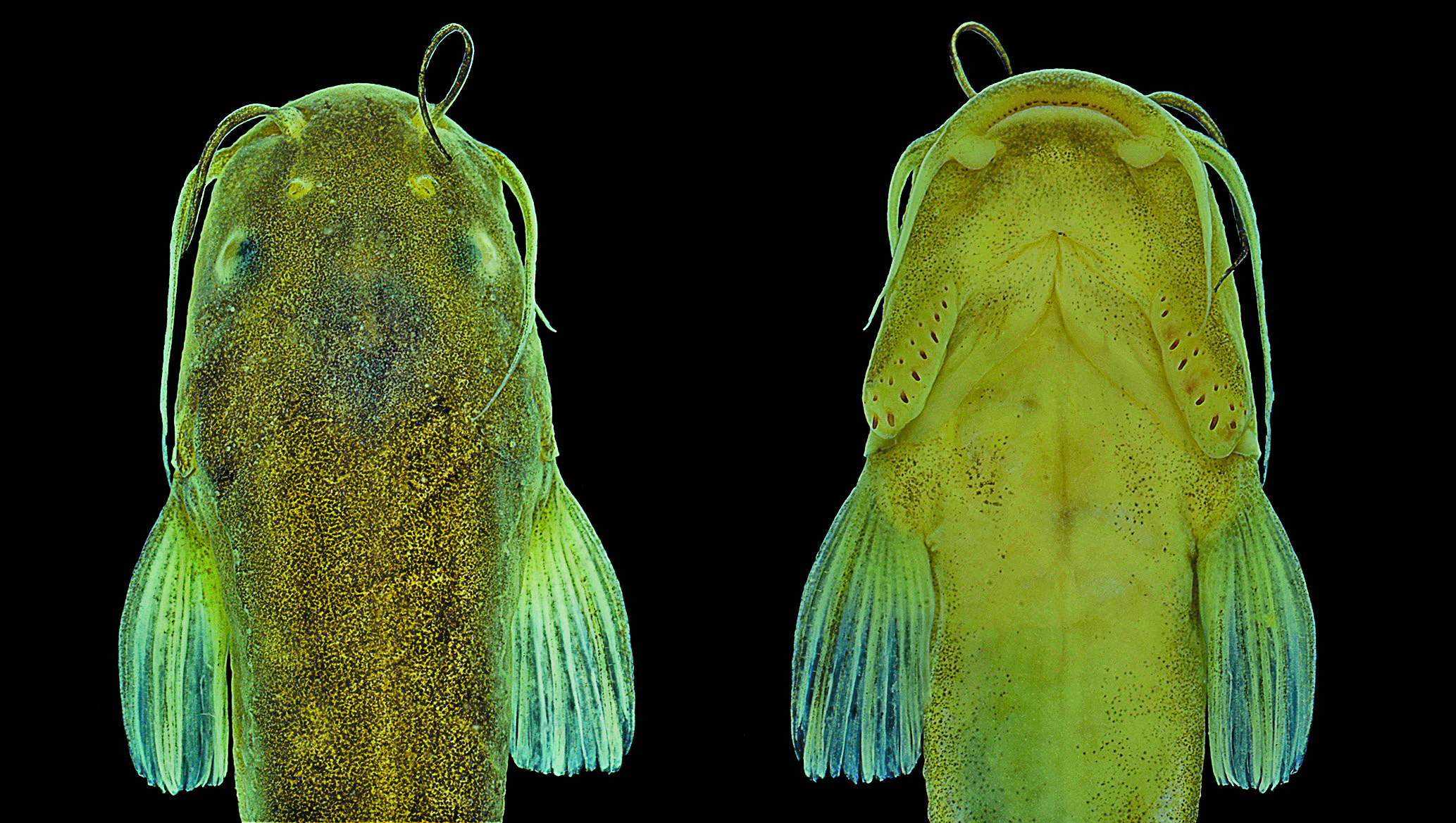 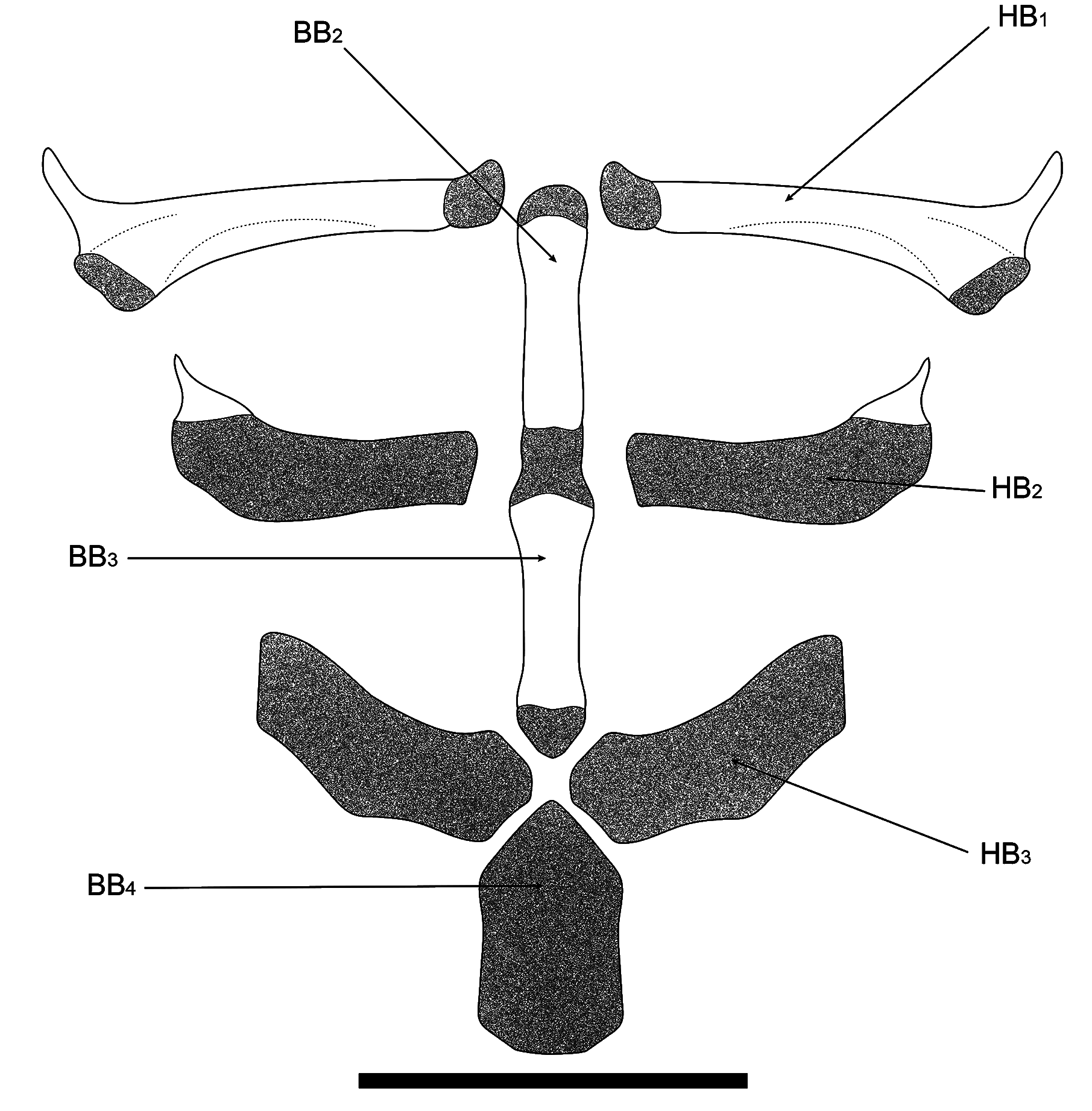 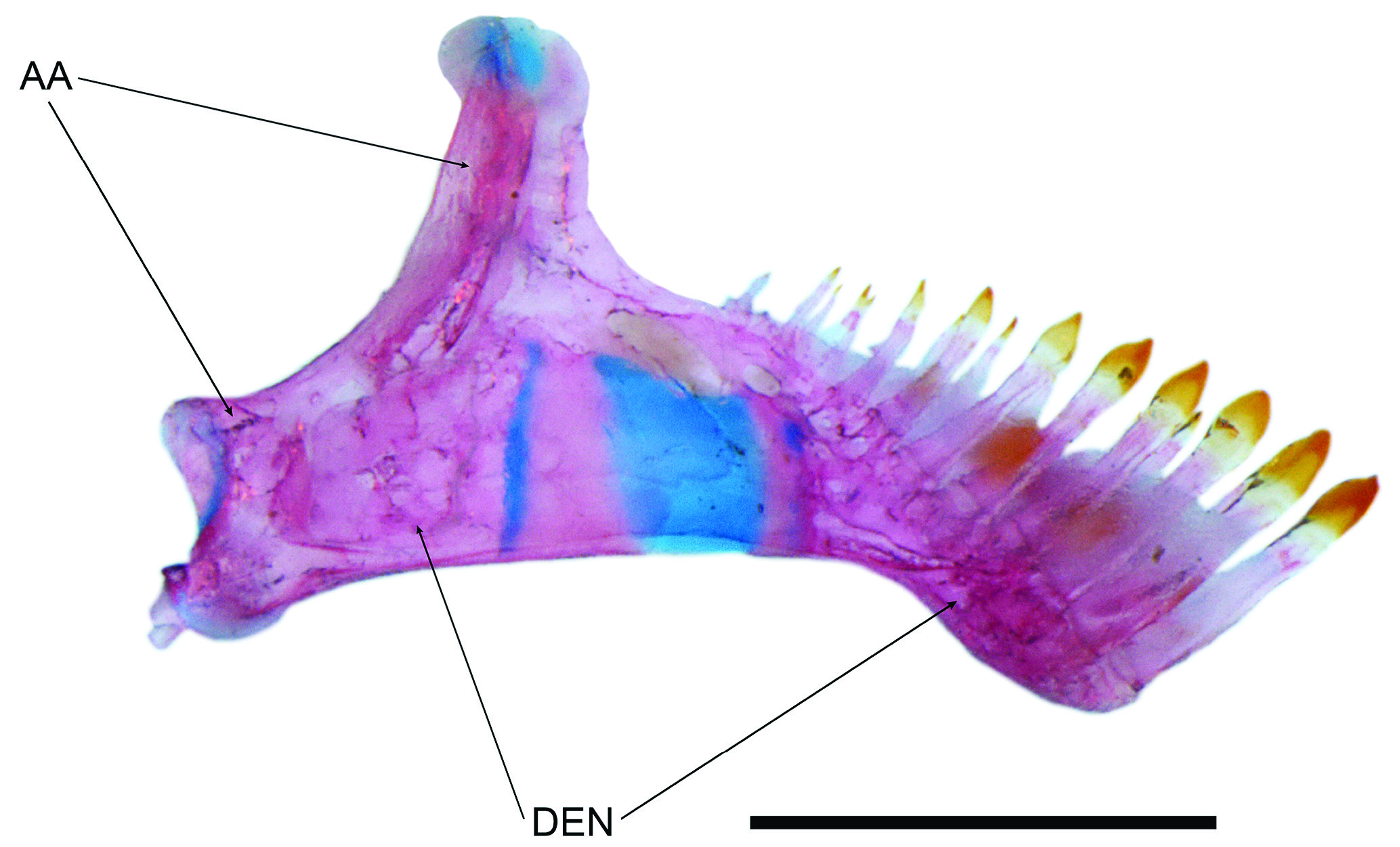 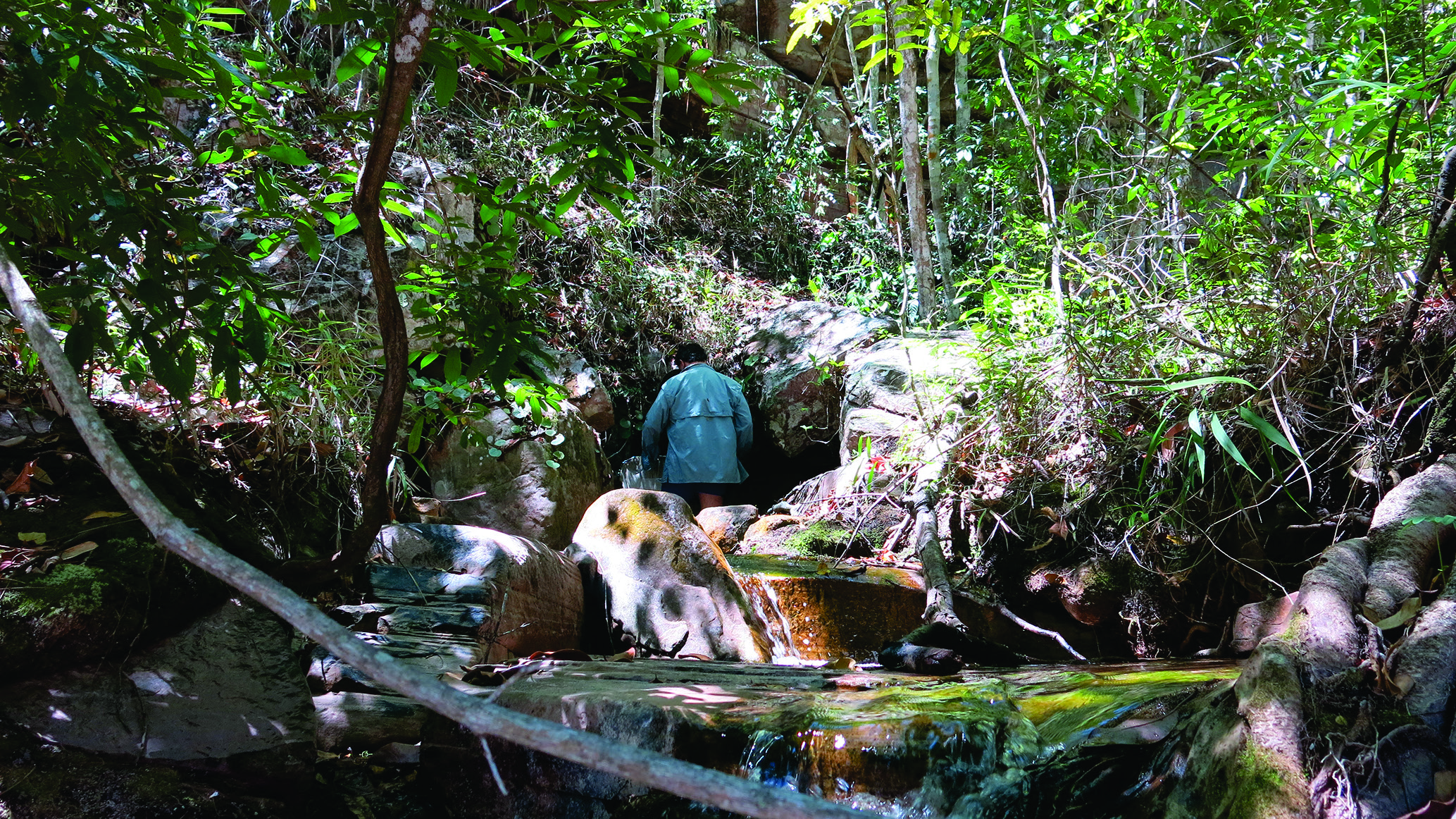