Entire dorsum piceous to dull black, ventral surfaces including legs reddish-brown. Posteror edge of collum, all margins of paranota, mandibles and epiproct ivory white. Metaterga with two oblique ivory lines, continuous or not across stricture, closer together and parallel on prozona. Anterior margin of collum with 4–5 prominent paramedian ovoid tubercles, and ca. 6 - 6 smaller subapical tubercles, both series white, paramedian stripes of collum small and broken up.

Prozona ornamented with a network of very fine, short, transversely arranged ridges, imparting a somewhat aspirate texture. Stricture deep around segments but without defining edges. Metaterga essentially smooth, without transverse series of tubercles except collum and segments 2 and 3 with a row of indistinct tubercles along caudal margin; limbus broad, edge not laciniate.

All paranota posterior to collum elevated above level of middorsum (Fig. 6), most prominently on anterior and posteriormost segments, those of segments 2 and 3 secondarily decurved horizontally distally. Paranota widely separated, except on segments 2–4 increasingly deflected posteriad, the anterior corners diminished into part of a continuous arc, caudal edges convex. Anterior edges abruptly reflexed nearly vertically, set off by a depression from paranotal surface, the actual white edge thickened and coarsely convoluted (Fig. 2), resembling a tightly twisted cord; posterior edges less strongly reflexed but notably thickened and provided with 4–6 acute dentations (Fig. 3). Ozopores removed from lateral edge by about 2 or 3 times diameter of the peritreme (Fig. 2).

Female paratype: Length ca. 64 mm, maximum width (near segment 14), 9.2 mm, but body almost parallelsided over most of length, W/L ratio ca. 15 %. Agreeing very closely with male in color and peripheral structure, but differing in that the paranota are less elevated, and metazona with a series of evident small tubercles along posterior margin. Cyphopods (Figs. 14, 15) reduced in size and sclerotization, largely concealed in intersegmental membrane and visible only with dissection. Receptacle prolonged and narrowed mesad, the surface strio-annulate, merging into thin clear membrane proximad, subglobosely enlarged laterad, with smooth surface, valves much reduced in size and indistinct, apparently contained within receptacle; operculum large, flattened, entire cyphopod without setae.

Comments. The type locality, Altaquer, is shown on large scale maps (e.g., Colombia 1950), also on Google Earth satellite imagery. The reserve is located in southwestern Colombia, in a transitional Andean-Pacific forest between 1100m and 1500 m, with annual rainfall of 8500 mm and average temperature 19 ° C. It is in the Choco phytogeographic region ( Rangel, 2004), the most outstanding characteristic of which, according Gentry (1982), is the extremely high average annual precipitation, reaching 11770 mm at Tutunendo in central Choco department. Choco is the only place in the neotropics in which pluvial forest (Tropical rain forest) occurs, a region with high endemicity and the most biodiverse ecosystems on earth ( Lourenço, 1994). This reserve is also characterized by the forest sharing, according to Franco-Roselli et al. (1997), many of its features, such as floristic composition and stratification, with the rain forest (<1000m) and montane forest (> 1800). It also shares many species with sub- Andean and Pacific forests, so the Ñambí Reserve is considered an ecotone between these two regions.

Field notes specify collections made by hand; the millipeds being active both diurnally and nocturnally, on the surface and ascending trees.Most individuals were active at night, on mossy trunks about 1 meter height, some on the petioles of living leaves, others in litter on the ground.

Eleven of the 18 individuals carried more than 400 individuals of bryophytes, chiefly on the dorsal side of the paranota. Families of bryophytes found include Lejeuneaceae   and Pilotrichaceae   , which principally grow on leaves of shrubs and trees, and Fissidentaceae   species associated with soil.

After a century in alcohol, the color pattern is still evident although obviously bleached: dorsum light brown with light paramedian stripes, oblique and widely spaced on metaterga, closer and parallel on prozona.

Collum appearing strongly elevated medially owing to abrupt depression of its paranota, middorsal area flat to slightly concave, the entire surface invested in flattened oval tubercles, anterior margin with a row of 6 - 6 enlarged oval polished tubercles set off by a transverse depression. Subsequent metaterga more or less uniformly ornamented with irregular flattened tubercles, smallest near stricture, becoming much larger posteriad. A series of 12 to 14 small tubercles across posterior margin of metaterga, another series of much smaller tubercles across midlength, both series most distinct on posteriormost segments.

Paranota of segments 2–4 directed anteriad, laterally distinctly decurved, paranota of segments 4 to about 14 transverse, nearly horizontal and set high on sides, the middorsum only slightly convex (Fig. 10). Outlines of representative paranota shown in Figs. 7–9. Anterior edges not notably elevated and modified as in P. bryophorus   . Epiproct similar to that of bryophorus   . Paraprocts finely granular, the discal and marginal setiferous tubercles notably large and polished. Paramedian tubercles of hypoproct prominent, about twice as long as basal width.

Gonopod aperture small, oval, similar to that of bryophorus   . Gonopods straight, massive, setose on ventral side up to level of solenomere, apical lamina appearing somewhat narrower than in that species (cf. Figs. 12 View FIGURES 11 – 12 and 13) owing to a different positional orientation (see comments below).

Comments. “Rio Peripa” is taken to be the stream forming the boundary between Manabi and Guaymas provinces, ca. 30 km northwest of Quevedo, at coordinates 79.71667 W – 0.88333 S. Festa collected there during December of 1897; his localities may now be inundated. by an impoundment.. Information on the Internet associating the river with Pichincha do not refer to the Ecuadorian province by that name, but to a small settlement on Rt. 40 about 37 km south of Rio Peripa.

A specimen in the British Museum (1903.7.2.50) labeled “Rio Durango, Ecuador ” was examined in 1960 and identified as P. fasciolatus   on the basis of Silvestri’s description. Although the gonopod structure closely matches that of the type specimen, no notes were made about peripheral structure, so this specimen must be re-examined to establish its possible identity with P. bryophorus   , especially since the locality presumably is the Rio Durango near San Lorenzo in Esmeraldas Province, only about 100 km west and south of the Reserva Natural Río Ńembí.

Brolemann’s 1919 detailed description of his material from Santo Domingo de los Colorados is entirely consistent with the holotype of fasciolatus   , confirming his identification.

Observations of the gonopods of the two species under discussion demonstrated that the least difference in position of the appendage resulted in substantial alteration in the appearance of the apical laminla in particular. In P. fasciolatus   (Fig. 13) this blade is so positioned that in mesal aspect more of the thin edge is visible than in P. b r y - ophorus and therefore seems smaller and more slender. Perhaps a precaution to be considered in future studies would be to illustrate the gonopod (in addition to the standard mesal aspect) in a position that shows the maximum surface/shape of the lamina whatever its actual position might be. 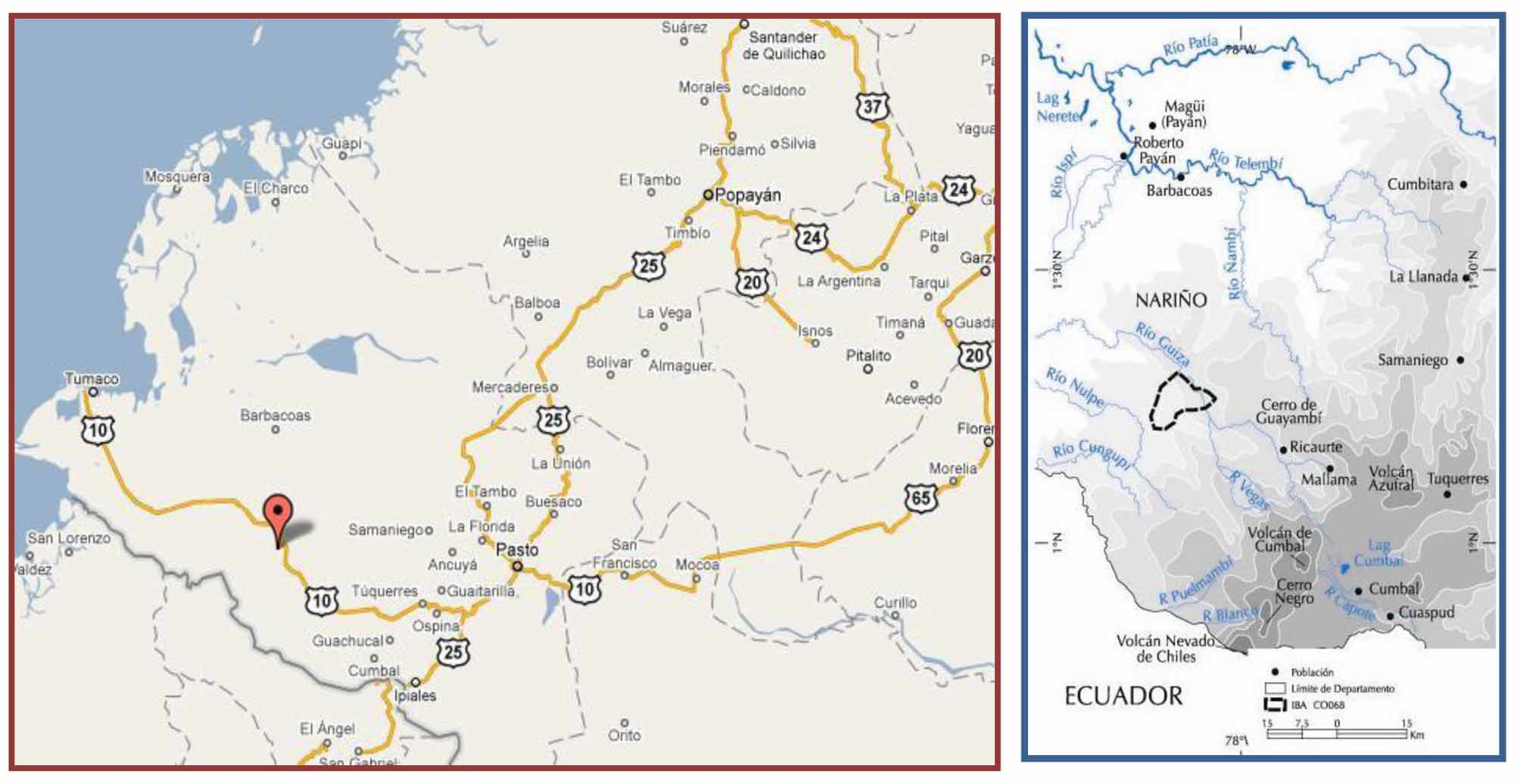