Apterous vivipara. Appearance in life: Base color of the body pale milky yellowish; venter of thorax and abdomen pale; head black, red or orange, often paler than prothorax, which may be black or reddish, dorsum of meso- and metathorax more or less black; front of abdominal dorsum with broad white wax band broken in middle by black; abdominal terga II –IV black, V mostly pale with a white wax spot in middle; siphunculi black, with narrow white wax band between them and with dark red internal pigment surrounding their bases; abdominal terga VII, VIII, and cauda dusted lightly with white wax; antennae with segments II –V mostly white, with dark apices, segments I and VI entirely dark; legs mostly pale, coxae and trochanters pale to very light grey with apex of femora and tibiae and entire tarsi grey. Within a sample of apterae, variation in color development ( Fig. 1View FIGURE 1) is probably based on specimen age.

Alate vivipara. Appearance in life: most of body, legs, and antennae rather dark, base color reddish when it is apparent.

Ovipara. Appearance in life: base body color dark red to very dark red and nearly black, wax markings essentially as in aptera, other pigmentation more or less as in aptera entire hind tibia grey, and apex of a.s. III not or only slightly darkened.

Alate male. No male specimens of Aphthargelia  have been confirmed as A. rumbleboredomia  because they have not been unequivocally associated with their mothers. There are no clear morphological distinctions that separate all the male specimens from across the continent. Fourteen male specimens in the author’s collection may be this species and will be filed with it.

Etymology. The species name is in honor of one of my collecting partners, Rumble the dog, who often got bored with my frequent stops and went back to camp part way through our morning walks.

Biology and distribution. This species was first discovered by the author living on Aconogonon phytolaccifolium  . This plant is a large herbaceous perennial herb (stems up to 2 m long) in the mountains from Alaska to California, Montana, and Nevada (Hitchcock and Cronquist, 1978)  . It inhabits rocky meadows, talus slopes, and mountain ridges. In practice, it is often found growing along primitive roads, which seem to provide suitable habitat. Following the initial find of A. rumbleboredomia  on roadside A. phytolaccifolium  , it was found several other times in similar mountain habitats of northern Idaho. Searching in the late fall found no specimens on Aconogonon  , and because Symphoricarpos  was in the area, host alternation was suspected. In July of 2011 several new colonies were found on lower leaves of A. phytolaccifolium  near Crystal Lake, Idaho. The alate viviparae founders of these colonies were still present, several with signs of age, such as broken wings and accumulated dust. These features are indicative of aphid colonies started by migrant females. Finally, in September of 2012 migrant females were found colonizing Symphoricarpos  and producing oviparae. Both locations where re-migrating alatae were found on Symphoricarpos  are near known populations of Aconogonon  .

Andersen (1991) studied this species on Aconogonon davisiae  (as Polygonum newberryi  ) on Mount St. Helens starting four years after it erupted in 1980. His work looked at the interactions between A. rumbleboredomia  and the ant Formica fusca  , concluding that the aphid performed better in the absence of ants, and that the ants were primarily acting as predators.

On Aconogonon  , this species is often found on the lower to middle leaves, and in mixed assemblages with Capitophorus essigi Hille Ris Lambers.

So far A. rumbleboredomia  has been collected in Idaho, Oregon, and Washington, but likely occurs in other states and Canadian provinces where its hosts grow in reasonable proximity.

Type material and material examined (all collected by the author except where noted). Holotype slide, AJ 5254, USA, Idaho, Shoshone Co., Crater Peak, F.R. 301, ex Aconogonon phytolaccifolium  , 3 X 2011 (middle of the 3 specimens is holotype, slide marked on top of each label with red ink, other 2 specimens on slide are paratypes), deposited in the USNM.

Comments. This new species looks very different from A. symphoricarpi  when alive due to striking color differences: in contrast to the red and orange colors of A. rumbleboredomia  , A. symphoricarpi  is dark blue to black. When cleared and preserved on slides the two species are extremely similar. In mounted apterae the chief distinguishing character is the relatively reduced dorsal pigmentation in A. rumbleboredomia  ( Figs. 1View FIGURE 1, 2View FIGURE 2 – 7), which is obvious and consistent. Also, the apterae have coxae nearly pale as compared to darker coxae in A. symphoricarpi  . Other characters commonly used in aphid taxonomy such as length of the u.r.s. vs. metatarsal II, relative lengths of antennal segments, lengths of setae on various body parts, etc. all overlap in the two species. The alatae are exceptionally similar, but once again the dorsal pigmentation can be used to separate most specimens: in A. rumbleboredomia  the horizontal pigmented band on the abdomen between the siphunculi usually does not connect to the sclerites surrounding the bases of the siphunculi and is also thinner than in A. symphoricarpi  ( Fig. 3View FIGURE 2 – 7). The oviparae are also similar, but the relative size of the intersegmental muscle attachment plates appears to be diagnostic in this morph ( Fig. 4View FIGURE 2 – 7). The overall appearance of the ovipara in life is similar to the aptera, but the dark color of the thorax and abdomen is entirely internal pigment and not related to dark dorsal sclerites as in the aptera. 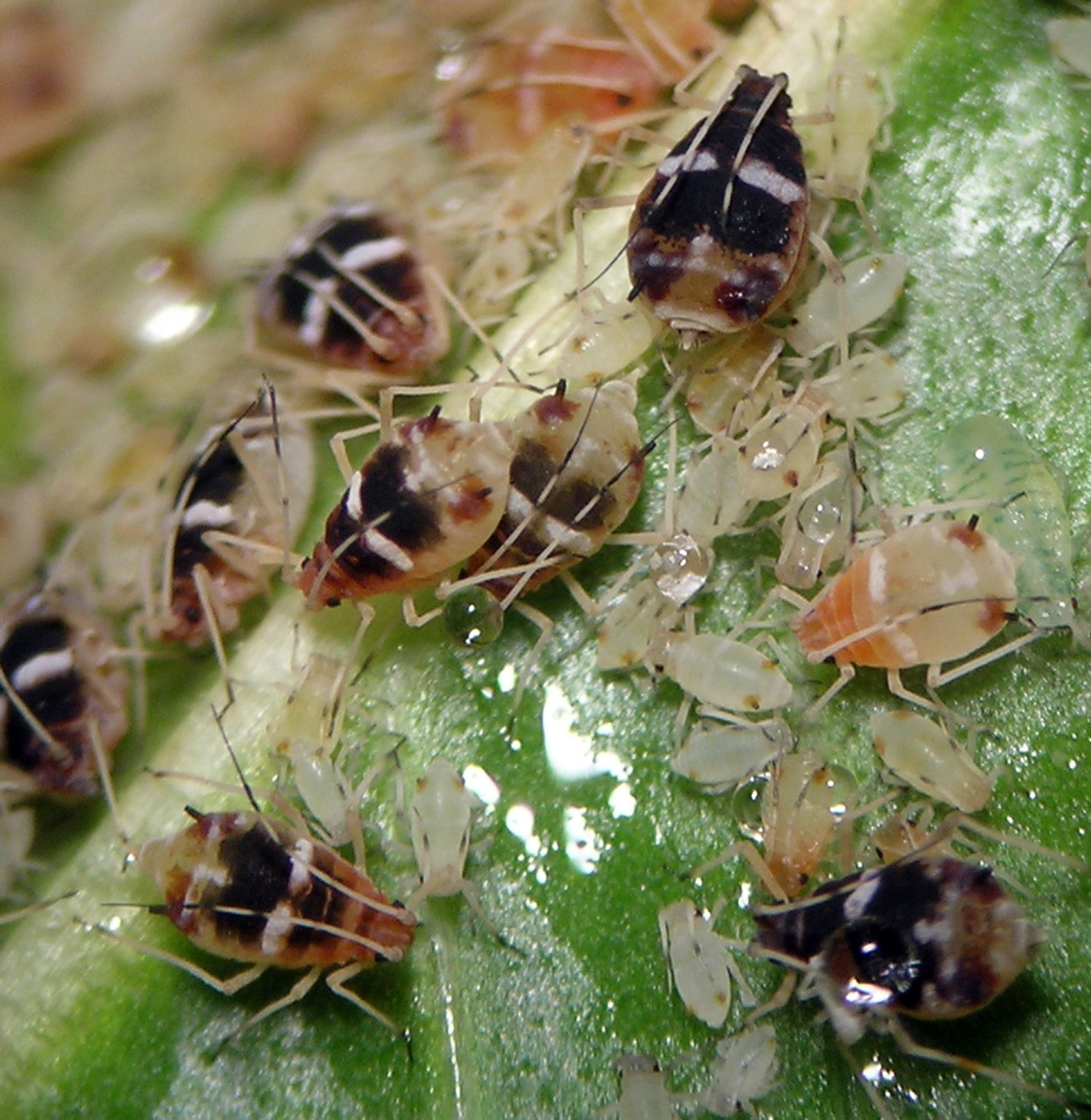 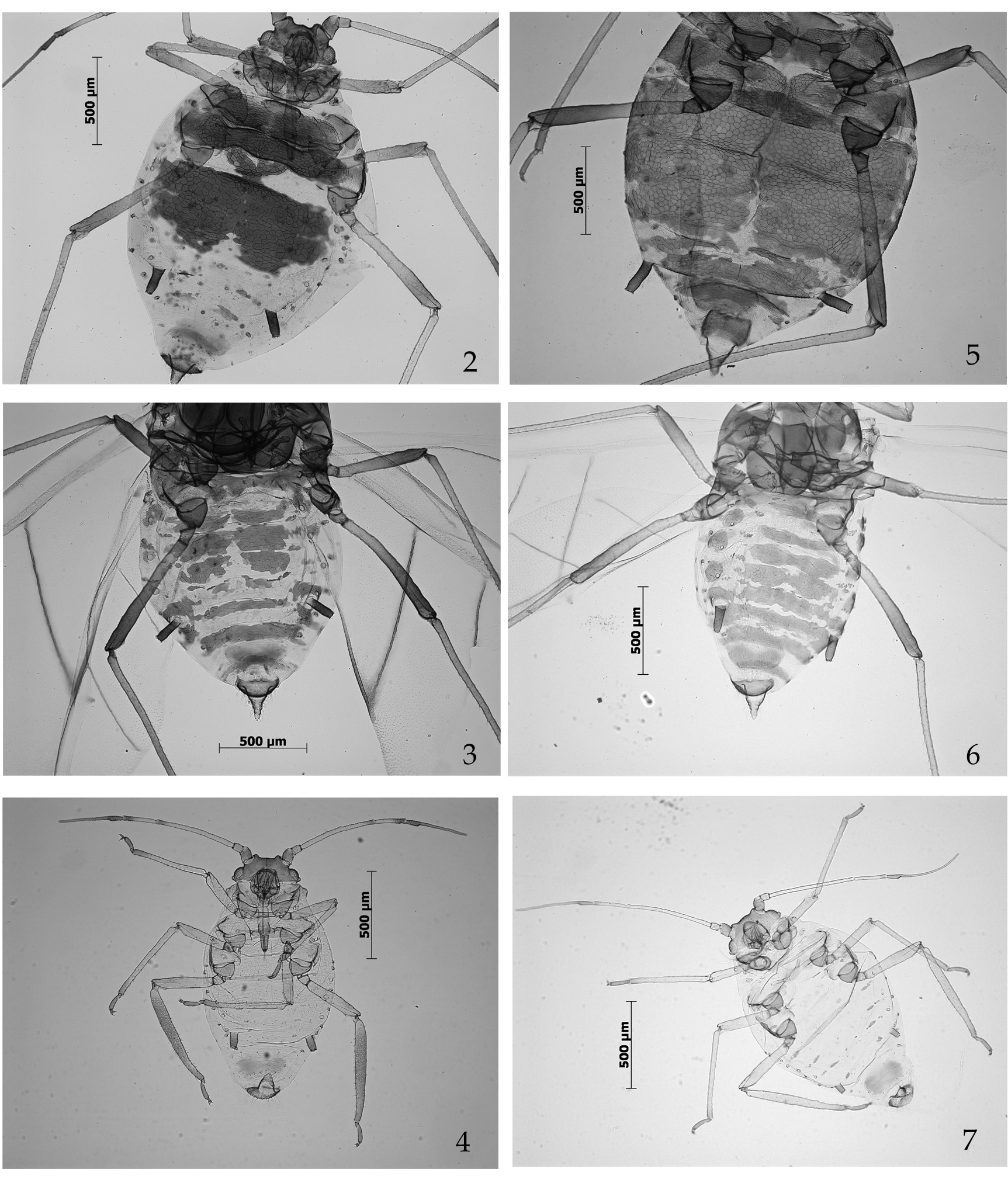