Description of juveniles from the Gulf of Mexico. Total body length ≤ 2 mm, head and pereon broader than pleon which is relatively slender. Head rounded and equal in length to pereonites 1–5 combined. Rostrum small with two acute horns (or points) dorsally, more prominent in males than in females. Eyes occupying most of head surface and ommatidia clearly grouped in two fields on each side. Antennae 1 attached under the rostrum and divided into three segments, the third segment longer than the first two; length of antennae 1 of males more than twice the rostrum, with some setae at the outer proximal margin; length of antennae 1 of females shorter than rostrum, with setae at the tip. Antennae 2 of males, attached at the lower margin of head, as long as antennae 1; absent in females. Pereon shorter (about 0.65x) than pleon and urosome combined. Pereonites 1 & 2 fused. Pereonites 5–7 dorsally wider than remainder. Gnathopods 1 & 2 simple and similar in shape; gnathopod 2 longer and more slender than gnathopod 1. Pereopods 3 & 4 subchelate, similar in shape; pereopod 4 longer than pereopod 3; distal margin of carpus smooth, armed with a large smooth (non-dentated) conical process, parallel to propodus; rest of segments are very similar to adults. Pereopod 5 wider and longer than any other pereopod; distal margin of carpus armed with several wide irregular teeth, forming a folding hand with the propodus; propodus longer than carpus, merus and ischium combined; dactylus absent. Pereopod 6 similar to but smaller than pereopod 5. Pereopod 7 reduced to broad basis, without additional articles. Rami of pleopoda consist of only four segments; each segment with two plumose setae at the distal margin. Uropods 1–3 lanceolate with serrated margins from the half-length to the tip (distal margin), armed with one prominent spine distally. Telson small and rounded, twice as wide as long, width at the base shorter than the width of the distal margin of the last urosomite.

Remarks. The juvenile individuals observed here have most of the diagnostic characters of the species observed in the adult state, mainly in the shape of antennae 1 & 2, gnathopods 1 & 2 and pereopods 5–7, but some structures were different: in pereopods 3 & 4 the distal margin of the carpus is smooth with a large process parallel to the propodus, the rami of the pleopoda consist of only four segments (these increase with growth), uropods 1–3 are more lanceolate with one large distal spine, and the telson is rounded ( Figs. 2–3 View FIGURE 2 View FIGURE 3 ). Recently, Bano & Kazmi (2008) observed similar differences in the shape of the uropoda and telson of small (around 3.2 mm) individuals. 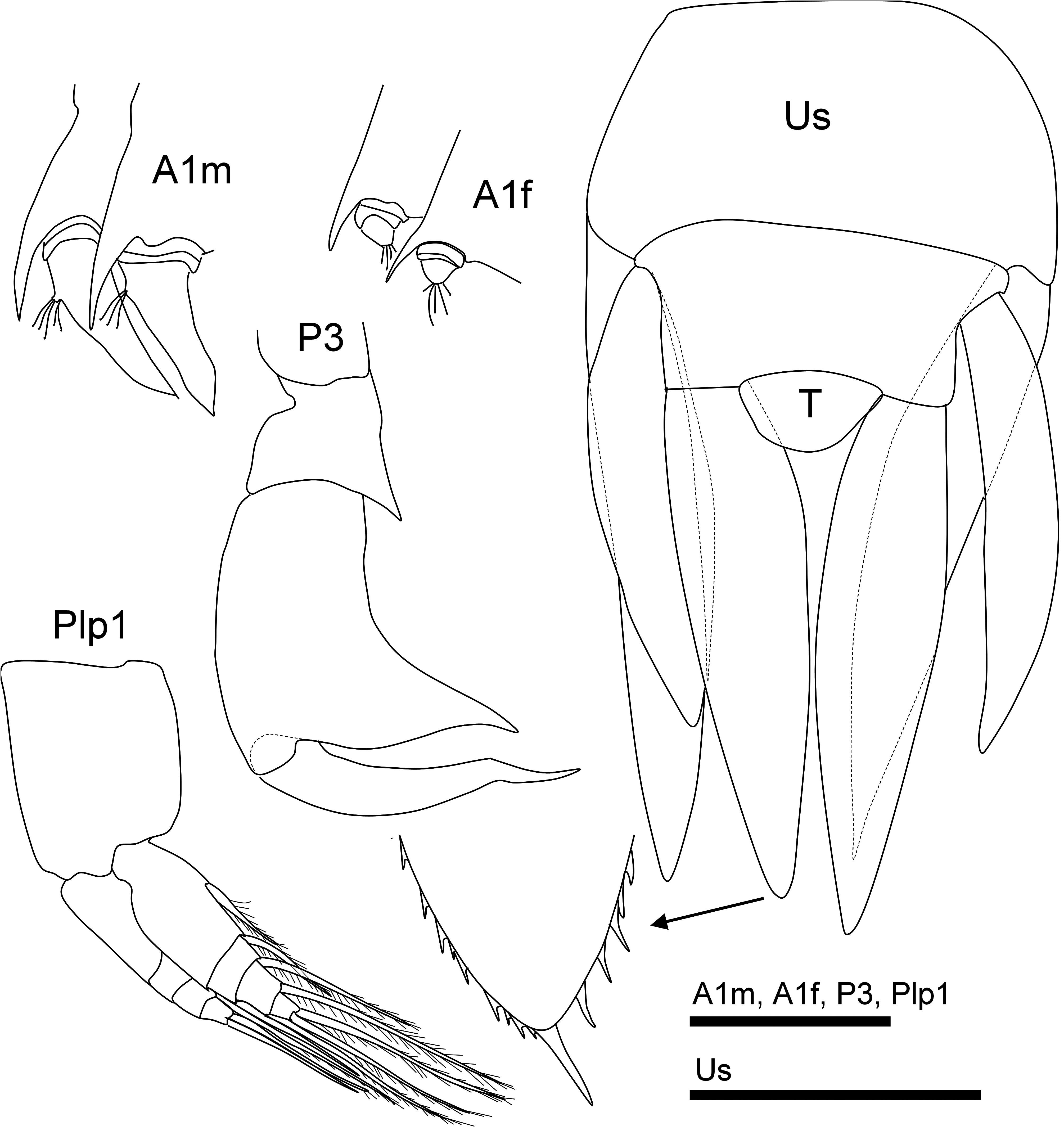