Discussion. This unique pilophorine genus is easily recognized by the above-mentioned characters. The significantly ovoid, thick body shape is unusual within the tribe Pilophorini , in which predominantly ant-mimetic members are accommodated (Schuh, 1989; Yasunaga et al., 2014; Yasunaga & Schuh, 2013). Such a far from antlike body shape of Hypseloecus species may have certain advantages as an adaptation to the unique host preference. Their appearance densely covered with silvery, scale-like setae (which are very easily rubbed off while being collected as in Fig. 2 View FIGURE 2 B vs. C and Fig. 8 View FIGURE 8 C vs. D) on the body surface makes them rather cryptic and harmonious with the habitat, or surfaces of their host plants ( Fig. 2 View FIGURE 2 A). Incidentally, Hypseloecus members at first sight resemble Coridromius species of the subfamily Orthotylinae ; the latter always has very tumid, developed metafemora, however ( Fig. 9 View FIGURE 9 C).

Schuh & Menard (2011) for the first time documented that Hypseloecus species are associated strictly with the hemiparasitic Santalalean host plants, although a single European species, H. visci (Puton) is known to feed on Viscum album L. ( Santalaceae ) ( Schuh, 1995; Wachmann et al., 2004; Wheeler, 2001). In Thailand, H. siamensis was discovered on inflorescence of Scurrula sp. 1 ( Loranthaceae ) growing on Ficus sp. ( Moraceae ) in November ( Fig. 1 View FIGURE 1 A). Many adults and immatures of three species, H. castaneus , H. katrinae and H. sericosagus , were found to co-occur on flowers and fruits of Scurrula sp. 2 heavily parasitizing Homonoia riparia Lour. ( Euphorbiaceae ) in March ( Fig. 1 View FIGURE 1 B). Flowers of Scurrula sp. 1 and sp. 2 are obviously different from each other although they are yet to be identified.

Adults of Hypseloecus are often attracted to light at night. Collection records suggest that most of the Thai species described below have two or more generations per year. In tropical forests, the hemiparasitic loranthaceous shrubs grow generally very high (near forest canopy), and, therefore, it is usually difficult to collect these mirids in satisfactory numbers as well as to survey their ecology.

The majority of Hypseloecus species have hitherto been known from the Australian and Afrotropical regions (Schuh, 2002–2014). Now the genus is revealed to be widely distributed in the Old World, including continental Asia. There are some more undescribed species in Indonesia and Nepal (Yasunaga, unpublished data), in addition to two known Asian species, H. ifugao ( Schuh, 1984) from the Philippines and H. takahashii Yasunaga, 2001 from the Ryukyus, Japan.

Hypseloecus forms the second most species-rich genus in the tribe Pilophorini , following a typical ant-mimetic genus Pilophorus Hahn which includes more than 120 described species. Pilophorini is assumed to consist of two basic lineages, one oligophagous, non ant-mimetic group and another more or less (sometimes strikingly) antlike and predaceous group ( Yasunaga & Schuh, 2013; Yasunaga et al., 2014). All species of Hypseloecus are now known to be associated strictly with the santalalean host plants. Of the four phytophagous (genus) groups present in Asia ( Sthenaridea Reuter , Parasthenaridea Miller and Lasiolabops Poppius ). Hypseloecus appears to the most speciose.

Recent works based on both morphology and DNA sequence data ( Schuh & Menard, 2011; 2013) improved our knowledge about the phylogenetic position of the Pilophorini . However, Hypseloecus is currently treated as paraphyletic in their analyses involving molecular data (unfortunately lacking any Asian species), although this genus is considered in all likelihood to be a monophyletic group, judging from the morphological characters and information on the biology. There are still quite a few undescribed species in the Oriental Region and subtropical Asia. To demonstrate the more satisfactory classification of Hypseloecus , broader surveys of characters as well as of the Asian faunas are required. FIGURE 1. Hosts and habitats of Hypseloecus. A. Sarika near Nangrong Waterfall, Nakhon Nayok Province, Thailand. B. Sarika near Sarika Waterfall. 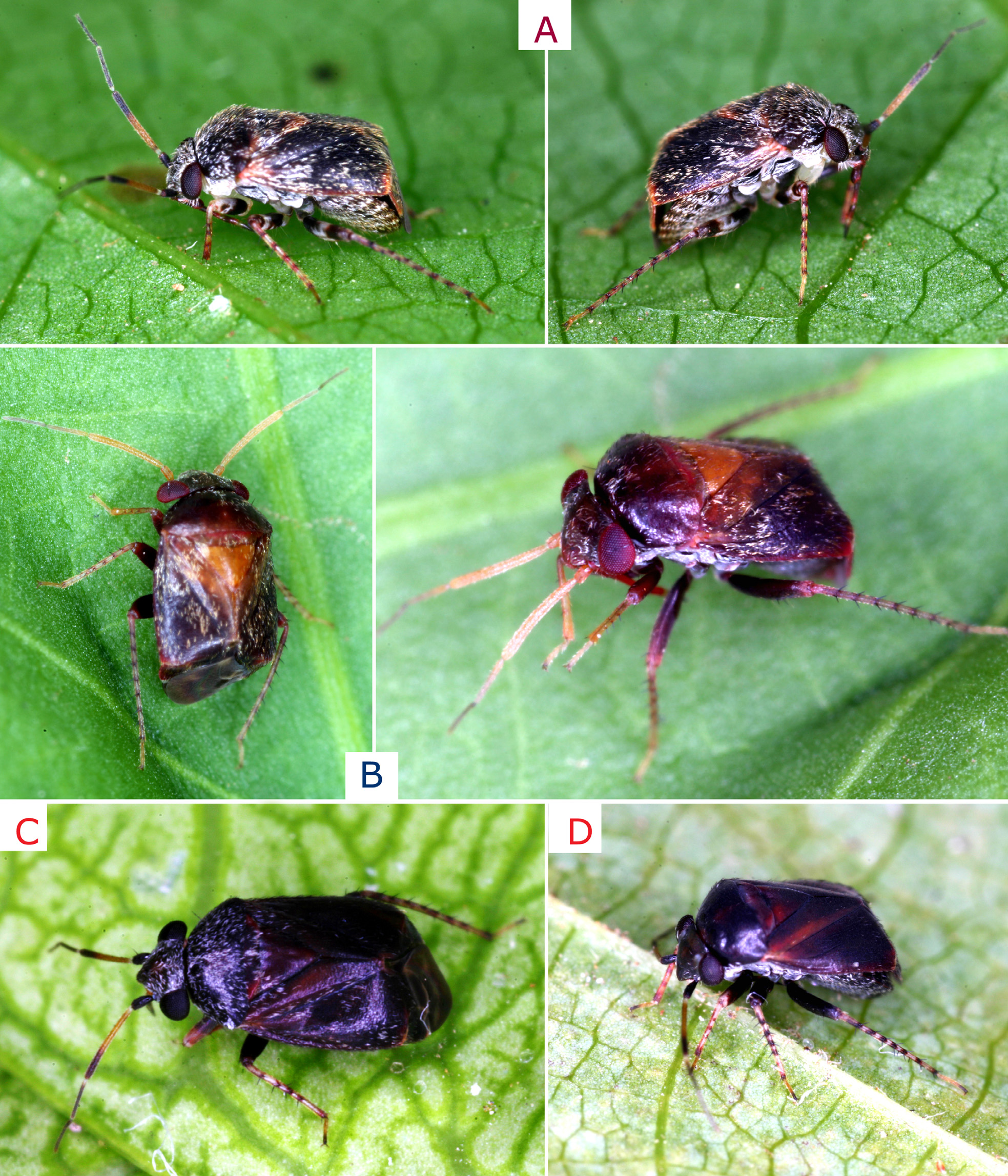