Range and habitat. According to Rios (1985) for Bellaspira grippi  : Bahia to Rio de Janeiro states, Brazil. According to Leal (1991 b: 183) Vitória and Davis Seamounts of the Vitória-Trindade Seamount Chain, off Espirito Santo State, Brazil. Specimens examined for this work were from Bahia, Espirito Santo, and Rio de Janeiro States, which correspond to reports by these authors. Reported from 2–100 m, on rubble and on Lithothamnion  deposits.

Description. Shell small (to 13.1 mm in length), narrowly fusiform, glossy, up to about 8 slightly convex whorls with impressed sutures and low ribs, the last whorl about 60 % of total shell length. Protoconch of 1 ¾– 2 smooth whorls, large for the shell and dome-shaped, the first partially immersed in the second. Axial sculpture of low, slightly oblique ribs, narrower than their interspaces, running from suture-to-suture but almost obsolete in sulcus; somewhat knob-like on the whorl’s periphery, and evanescent below periphery of last whorl. Ribs are almost entirely obsolete on some specimens. Varix represented by a swollen last rib, near the edge of the outer lip, not evanescent. Spiral sculpture of fine incised lines over the shell’s entire surface, fairly evenly spaced; ridge-like on the anterior fasciole. Incised lines limited to the shell base on some specimens. Sulcus demarcated by a depression of the axial ribs about ⅓-whorl height; ribs in sulcus quite low, sometimes obsolete. Outer lip solid, without axial folds; anterior end projects outward, beyond end of anterior canal in mature specimens; without a stromboid notch. Anal sinus is a wide but shallow indentation of the outer lip beginning at the suture, (shell viewed laterally), and shaped like an inverted “V”, with inner callus on both parietal wall and outer lip of mature specimens (when shell is viewed ventrally). Inner lip a faint wash, not margined on the parietal wall, very slightly margined at the anterior portion of the anterior canal; ending in a light callus at the posterior sinal area. Anterior canal short, open, turned slightly to the left when viewed ventrally, slightly notched at its tip. Color of most examined specimens a faint pink with a dark pink band just below mid-whorl that only shows between the ribs; protoconch and first teleoconch whorl cream-colored. Other specimens are all white, white with faint rose patches, all light golden brown or golden yellow with rose banding. 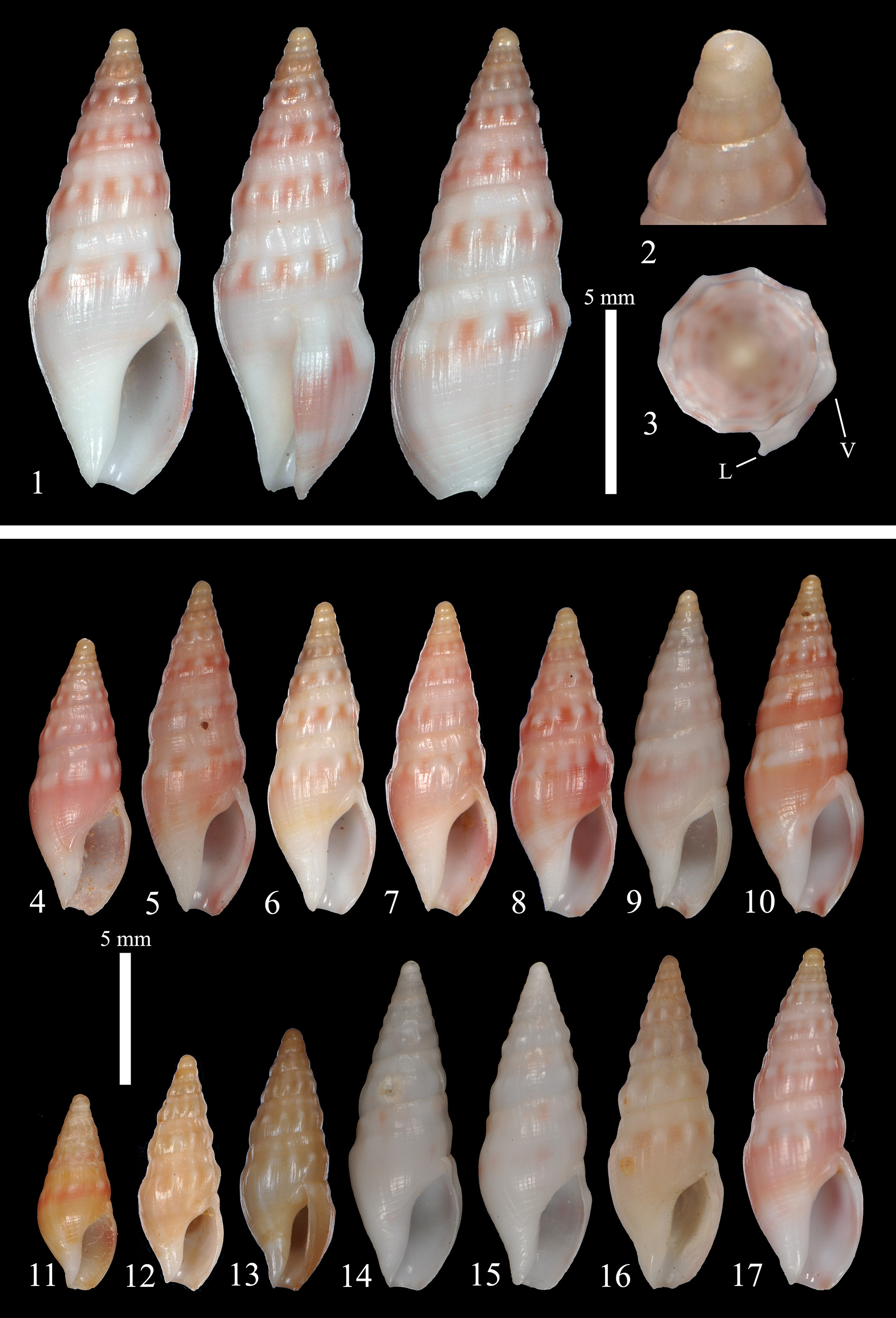