Etymology. Referring to the geographic region of occurrence of this taxon.

Diagnosis. A small-bodied race of P. tapoatafa  that differs from the typical race of southeastern Australia in the following ways: externally, with shorter, crisper and generally paler dorsal fur, more extensive cream fur on venter, relatively shorter tail, more boldly patterned face with contrasting cream muzzle and cheek, inner metatarsal pad contacting but clearly distinct from first interdigital pad, probable lower number of teats; cranially, very similar to the other subspecies of P. tapoatafa  but smaller in all cranial dimensions for both sexes and with proportionally narrower foramen magnum, relatively deeper rostrum and proportionally larger molars; genetically, with 3.0– 5.8 % sequence divergence for cyt b from other populations.

Additional differences from P. t. wambenger  and P. pirat  a are listed under the accounts of those taxa.

The dorsal fur is relatively short and crisp, the contour hairs measuring 5–6 mm in the centre of the back. Overall colour of the back and flanks is pale grey with a silvery frosting. Abundant and evenly distributed blacktipped guard hairs project up to 7 mm beyond the contour hairs. The ventral fur is a uniform cream from the vent to the chin. A diffuse, yellowish patch on the throat overlies a pigmented gular gland that measures 25 mm long by 6 mm wide. The boundary between flank and ventral colouration is relatively sharp. The fore- and hind-limbs are grey externally and cream internally, with a sharp demarcation, especially on the hindlimb. The scrotum is lightly pigmented and thinly clothed in cream fur.

The face is boldly patterned with a russet mid-rostral stripe that merges posteriorly into a dark grey patch on the crown, a cream preauricular patch, a dark loreal stripe, a dark postorbital spot, and distinct, black-rimmed orbital crescents. The cream fur of the chin and throat merges with a cream supralabial bar that extends partway along the upper lip, while the cheek patch is cream peppered with black. The vibrissal pads are thinly clothed in short cream fur, peppered with black. The mystacial vibrissae are thick and black, some with short gingery tipping, but the papillae are unpigmented. The pinnae are moderately large and thinly furred except along the anterior margin which supports a fringe of short black hairs.

The tail supports a black ‘brush’ measuring 135 mm. The basal portion of the tail is only moderately furred, producing the effect of an elongate ‘stem’ (c. 67 mm). The dorsal fur of the stem is grey near the base, blending distally into off-white. The under-surface is grey blending into russet at the base of the brush.

The upper surface of the pes is grey with a silvery frosting, changing abruptly to white on the sides and on the digits. The plantar surface of the pes is granular and supports six conspicuously striated, raised pads. The inner metatarsal and first interdigital pads are in contact but with an obvious line of demarcation; their combined length is 12.6 mm. The outer metatarsal pad measures 6.7 mm and is separated by a gap of 2.7 mm from the fourth interdigital pad. The second to fourth interdigital pads are elongate and of nearly equal length.

The cranium of WAM 16028View Materials is illustrated in Figure 21View FIGURE 21. Measurements are provided in Table 5. Too few specimens are available to demonstrate sexual dimorphism. However, the two adult males differ from the one adult female in ways that suggest male-biased dimorphism of the kind noted in the nomino-typical population—the male skulls are broader and more robust for their length, and have canines enlarged relative to near equal-sized cheekteeth.

Observed variation. External measurements taken from museum specimen records are summarised in Table 4. The paratype, a subadult male, has softer, lusher fur of a more even grey colour. The tail ‘stem’ is proportionally shorter (35 mm vs 116 mm for brush). WAM 1309, an adult female from Kunmunya Hill, has a well developed pouch with sparse, pale gingery hairs but the number of teats cannot be determined. The dorsal fur of this specimen is overall more gingery than the holotype or paratype but this is probably due to fading. The ventral fur is cream to the roots along a mid-ventral zone, from the chin to around the pouch. This is flanked on each side by a band of grey-based and cream tipped fur that extends onto the inside of the fore- and hind-limbs. The preauricular patch is more distinct in this specimen. The tail ‘stem’ is proportionally shorter again, measuring 35 mm vs 125 mm for brush). WAM 53763View Materials, a damaged roadkill specimen, is an adult female with a damaged pouch; the number of teats cannot be determined. The pes measures 34 mm and the tail 207 mm with a basal stem of 55 mm. The outer metatarsal tubercle in this specimen is very short (4.7 mm; gap to fourth interdigital pad 3.5mm) and the second interdigital pad is slightly longer than the third and fourth. The combined inner metatarsal tubercle and first interdigital pad are smoothly united on the left pes but distinguished by a clear kink on the left pes. Rhind et al. (2001) reported a female specimen from Mitchell Plateau ( WAM 27208View Materials; as KIM 5) with six teats; it is not known whether this represents the typical teat number.

Former and present distribution. The few records of this taxon are scattered throughout the Kimberley region, from Yampi Sound in the west to near Kalumburu (Pago Mission) in the east ( Fig. 22View FIGURE 22). There are recent records from Kimbolton Station near Derby (2003; WAM 53763View Materials) and from the King Leopold Range (2001; sighting by Mr Murray Ellis, pers. comm.). Undated subfossil occurrences in the southwest Kimberley are reported by Start et al. (2012). 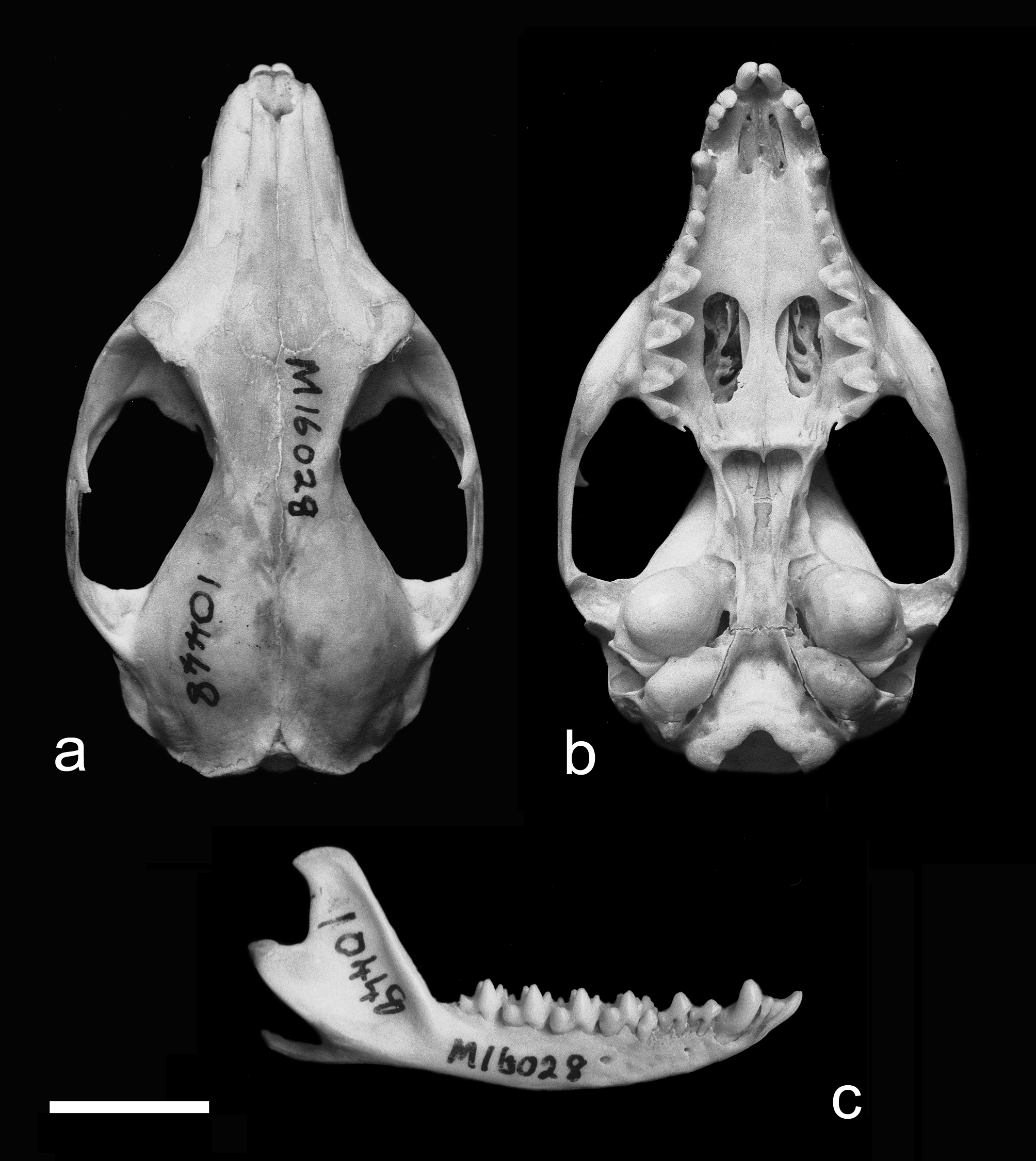