This population remains poorly understood. Although we have examined a total of 15 specimens from three areas [Atherton Tableland (n = 1); Cooktown area (n = 5); and Lockhart River (n = 9); see Fig. 22View FIGURE 22 & Supplementary Table II for details], only two are represented by cleaned skulls and one of these ( CM 12699) is shattered. Sparse museum records of this form are supplemented by sightings at various other localities in north Queensland. These suggest a geographic range extending at least from Iron Range in the north, to Elizabeth Creek, Mt Surprise, in the south.

Unvouchered but otherwise reliable records of Phascogales are available from two localities on the margin of the Gulf of Carpentaria ( Figs 18View FIGURE 18 & 22View FIGURE 22). Several individuals including a female with seven young were recorded by Donald Thomson in October 1929 at Edward River on the western side of Cape York ( Dixon & Huxley 1985: 32– 33); and two individuals were captured and released in 1988 on West Island in the Sir Edward Pellew group ( Johnson & Kerle 1991). The latter population was referred to P. p i r at a by Woinarski et al. (2011), though without explicit justification. On biogeographic grounds, these Carpentarian populations might represent outliers of either P. tapoatafa  or P. p i r a t a and they are here left unallocated to species. A recent survey of the Sir Edward Pellew Island Group failed to detect populations of Brush-tailed Phascogales on any island ( Woinarski et al. 2011).

External measurements taken from museum specimen records are summarised in Table 4. The adult male specimen from the Atherton Tableland ( CM 12699) is smaller than similarly-aged individuals of the nominotypical subspecies from southeast Queensland but it closely resembles this form in most aspects of external morphology. The dorsal fur is lush and pure grey, with no indication of mid-dorsal darkening, and without the brown tinge of P. pirata  . The venter has a narrow mid-ventral band of creamy white fur that continues forward onto the throat and chin. Hairs on the upper surface of the pes are white intermingled with grey, changing to pure white on the digits. Significant differences are observed in the plantar pads of the pes and in the patterning of the tail stem. In the pes, the outer metatarsal tubercle is very short (6.1 mm) and more widely separated from the fourth interdigital pad (gap of 3.7 mm). The tail stem is relatively long (95 mm) compared with the brush (135 mm) and is clothed above and below in dark hairs with cream tips. This contrasts with the condition in nominotypical P. tapoatafa  where the upper surface and sides of the tail stem are clothed in white hairs with lack tips.

The Cooktown sample includes several adult males ( JM 14678 and JM 11205) that approach the size of adult males from southeast Queensland. In general, the external morphology also falls within the range of variation of the nominotypical race, but with several significant departures. One concerns the patterning of the tail brush, which in most individuals matches the condition described above for CM 12699. However, in one adult male ( JM 14678) hairs on the upper surface of the tail stem are entirely black, contrasting with white on the flanks and black to russet frosted with white below; the overall effect is unusual and different from that observed in any other population. The fur on the upper surface of the pes in most individuals is a mixture of white and dark hairs, giving way to pure white on the toes. JM 14678 differs again in having the pes almost entirely white, with dark hairs restricted to around the ankle. The condition of the plantar pads also varies somewhat more than usual within a population. In JM 14678 and JM 14477 (an adult female) the outer metatarsal tubercle is very short (6.5 and 6.1 mm, respectively), and thus comparable to CM 12699 from the Atherton Tableland. In contrast, three other specimens in the Cooktown series have elongate outer metatarsal tubercles, measuring 8.7–10.3 mm. In all specimens the inner metatarsal tubercle is fused with the first interdigital pad; in all but JM 15411 (a subadult male) the point of union is marked by a clear kink in the pad. The adult female ( JM 14477) has six small but clearly defined teats inside a poorly developed pouch. This contrasts with eight teats in nominotypical P. tapoatafa  .

The series from Lockhart River on the eastern side of Cape York closely resembles those from Cooktown in external morphology. The only fully adult specimen ( DTC 304 from Bare Hill) is represented by a skull alone; this is illustrated in Fig. 23View FIGURE 23. This is relatively small compared with series from southeastern Queensland but slightly larger than CM 12699 from the Atherton Tableland. The morphology of the skull and teeth is very close to specimens from southeast Queensland and northern New South Wales (e.g. CM 24425 from Coraki; Fig. 16View FIGURE 16) except that the molars and auditory bullae are proportionally smaller.

The northern Queensland specimens of P. tapoatafa  thus conform in most regards (e.g. body colouration, cranial morphology) with the nominotypical form of P. tapoatafa  but share some features with the Kimberley subspecies (e.g. smaller size, reduced teat number, tail stem patterning). However, these morphological comparisons are clouded somewhat by the variation observed within and between the series.

We obtained a single cyt b sequence from within this geographic region ( CM 12699 from Atherton Tableland; Table 1); attempts to obtain sequence from other individuals failed, probably due to their being fixed in formalin. The sequence from CM 12699 is about equidistant from P. t. kimberleyensis  (4.4–4.9 %; n = 2) and P. t. tapoatafa  from New South Wales and southeast Queensland (3.0– 5.3 %; n = 4).

Pending further information on the northern Queensland populations of P. tapoatafa  , we elect to leave them unallocated at subspecies level. As noted earlier, a subfossil record of P. tapoatafa  from Christmas Creek, inland of Townsville, raises the possibility that Brush-tailed Phascogales once occurred along the entire length of the Queensland coast, perhaps with some narrow discontinuities through the driest areas. 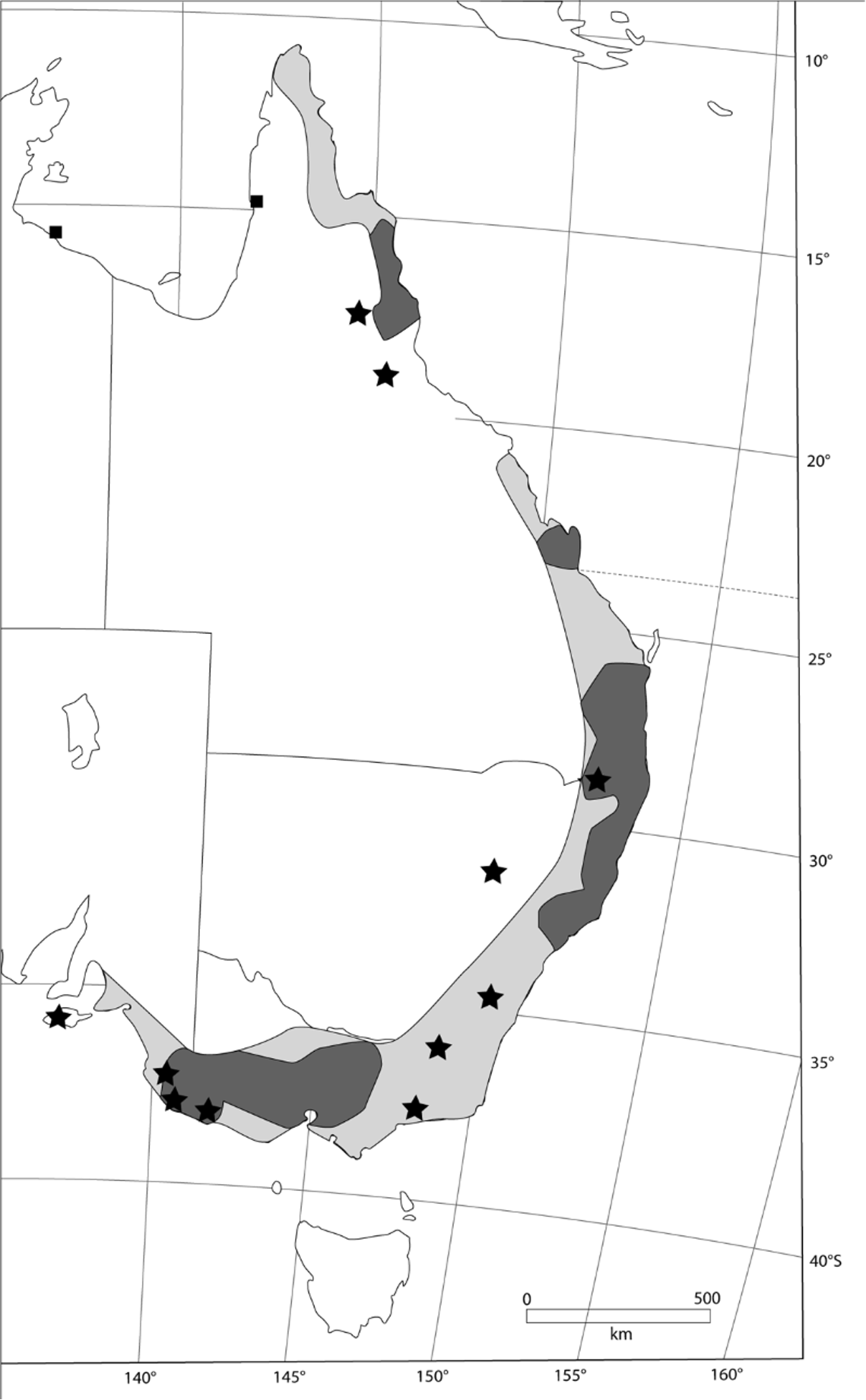 FIGURE 18. Map of eastern Australia, showing the contemporary (dark grey) and historic (light grey) distribution of P. tapoatafa tapoatafa, based on museum specimens and reliable sightings. Star symbols are sub-fossil records judged to be of late Holocene age. Square symbols represent the location of two sight records that might pertain to either P. pi r at a or P. tapoatafa. 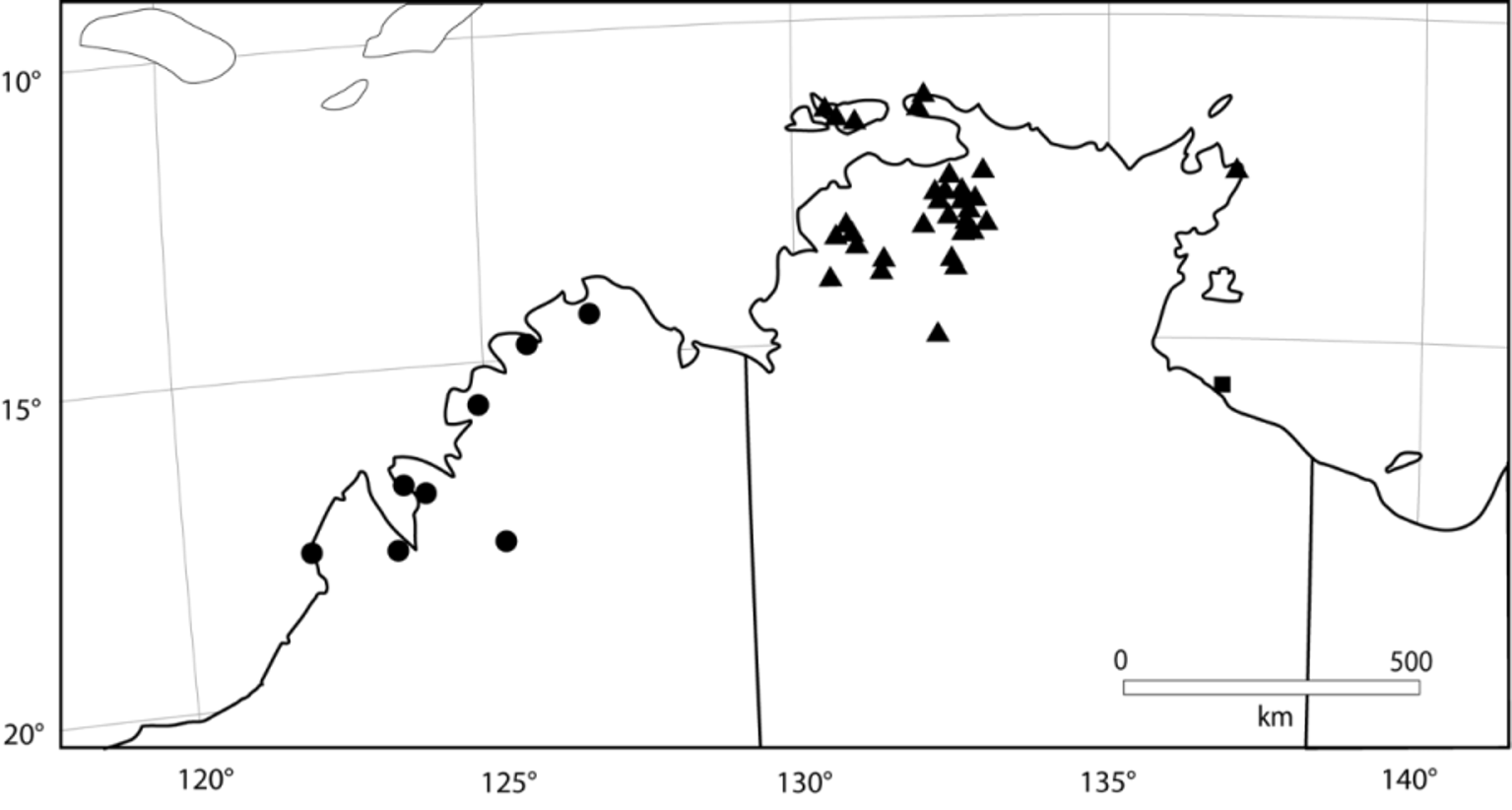