Assing, Volker, 2018, On the taxonomy and zoogeography of some West Palaearctic Quedius species, with a focus on the East Mediterranean and the species allied to Quedius umbrinus and Q. nivicola (Coleoptera: Staphy, Linzer biologische Beiträge 50 (1), pp. 149-182: 175-177

C o m m e n t: Quedius josue  was originally described based on a unique female from "Arag-el-Emir" ( SAULCY 1865), today Iraq al-Amir [31°55'N, 35°45'] in Jordan. According to the description, the apical antennomeres are "d'un roux foncé", the pronotum has the "bord latéral et postérieur étroitement d'un roux foncé", and the elytra are "testacées,..., avec un grande tache triangulaire commune d'un brun noir entourant l'écusson, s'étendant depuis la base". The species was subsequently reported from Lebanon, Cyprus (as Q. troodites), Israel, Turkey, and Iraq by FAGEL (1968a), KORGE (1971a), ASSING & WUNDERLE (2001), and ASSING (2004). When treating the species of the Q. nivicola  group, FAGEL (1968a: 2) stated that the types of the Quedius  species described by Saulcy were "introuvables au Muséum d'Histoire naturelle, de Paris", so that they, like the type material of so many other Staphylinidae  species described by Saulcy, must be regarded as lost. In view of the similarity of the species allied to Q. josue  , of the frequent previous confusion of these species, and of the fact that they have partly sympatric distributions, the designation of a neotype is indispensable to unambiguously define the species. Based on the original description and the distributions of species of the Q. nivicola  group, three species would qualify as suitable candidates: Q. petraensis  , Q. problematicus  , and the species previously interpreted as Q. josue  (and illustrated as such) by FAGEL (1968a). In the interest of the stability of nomenclature, a male belonging to the latter species is designated as the neotype, thus avoiding further taxonomic changes.

The coloration of Q. josue  is subject to rather pronounced intraspecific variation. The pronotum may be of uniformly dark-brown to blackish coloration or it may have the margins narrowly reddish or yellowish (especially in material from Cyprus). The elytra may be uniformly yellowish to pale reddish, or they may be more or less extensively and more or less distinctly infuscate near the scutellum and along the suture. The aedeagus and its variation are illustrated in Figs 53-65View Figs 53-62View Figs 63-68.

from Q. petraensis  by the different shapes of the median lobe and the paramere of the aedeagus, as well as by the paler coloration of the elytra;

from Q. problematicus  by the different shape of the apex of the median lobe of the aedeagus both in lateral and in ventral view, as well as by the darker coloration ( Q. problematicus  : pronotum usually more extensively, or even completely reddish or yellowish) of the slightly less slender pronotum;

from Q. ortrudae  by a slightly smaller aedeagus with the apical portion of the median lobe of slightly different shape, and by the paler coloration of the elytra ( Q. ortrudae  : elytra reddish to dark reddish, or even darker).

The known distribution of Q. josue  includes Cyprus and the Middle East from Lebanon and North Syria (first record) to Israel and Jordan ( Map 4View Map 4). Previous records from Turkey and Iraq refer to Q. ortrudae  .

Like Q. problematicus  , Q. josue  is epigeic, as can be inferred from the habitat details reported by FAGEL (1968a) and ASSING & WUNDERLE (2001), by the fact that most of the examined material was sifted from leaf litter, and by the long series of specimens collected on various occasions. 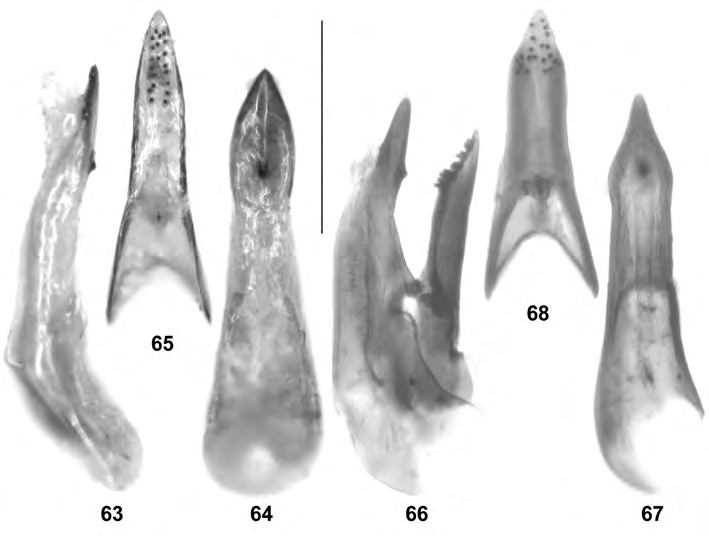