Of some 70+ species of Eudendrium Ehrenberg, 1834 recognised worldwide ( Schuchert and Collins 2021), these hydroids appear closest in colony morphology to E. certicaule Fraser, 1938a , originally described from the Galápagos Islands. Its cnidome, now recognised as being of considerable importance in the identification of species in the genus, has yet to be described.

In common with the original description of E. certicaule by Fraser (1938a), colonies examined here were monosiphonic and quite straight, branches made wide angles with the stem, stems and branches bore about two annulations basally with few or none elsewhere, and hydranths bore about 12–15 tentacles. Hydranths with gonophores were not fully aborted, and their pedicels were smooth throughout. Gonophores of the male were arranged in a whorl around the hydranth base, with each gonophore comprising a single chamber. Female gonophores were also arranged in a basal whorl around the hydranth, with an unbranched spadix curving over each egg. In contrast to the original description of E. certicaule , colonies examined here were smaller (4–9 mm high vs 14– 34 mm high) and consisted of both stolonal and erect components. Finally, hydroids from Cocos Island were collected at snorkelling depth, whereas the types of E. certicaule came from depths of 91–128 m ( Calder et al. 2009). In light of all this, we have identified our specimens as E. cf. certicaule .

The nematocyst complement of specimens from Cocos Island included abundant small microbasic euryteles ( Figure 4a, b View Figure 4 ), resembling those found in all species of Eudendrium , and somewhat less abundant larger microbasic euryteles ( Figure 4c View Figure 4 ). Also observed in these hydroids were two other kinds of nematocysts, but it is uncertain whether they are kleptocnidae or part of the cnidome. A banana-shaped type ( Figure 4d View Figure 4 ), possibly a microbasic mastigophore, was observed five times in colonies from three different collections (#240634, #240636, #240637). A pear-shaped type ( Figure 4e, f View Figure 4 ), considered an undetermined heteroneme, was observed more than 10 times, but in only one slide preparation from a single collection (#240566). Discharged threads were seen in neither of these two nematocyst categories, and their identity remains uncertain.

Eudendrium certicaule is currently known only from warm waters of the eastern Pacific. It has been identified in collections from three locations in the Galápagos Islands (between Narborough (= Fernandina) and Albemarle (= Isabela) islands; James Bay on James Island (Santiago); between Charles (= Floreana) and Indefatigable (= Santa Cruz) islands) ( Fraser 1938a) and one location off Baja California, Mexico (off Cedros Island) ( Fraser 1948). No description or illustration was provided to accompany the report from Cedros Island. 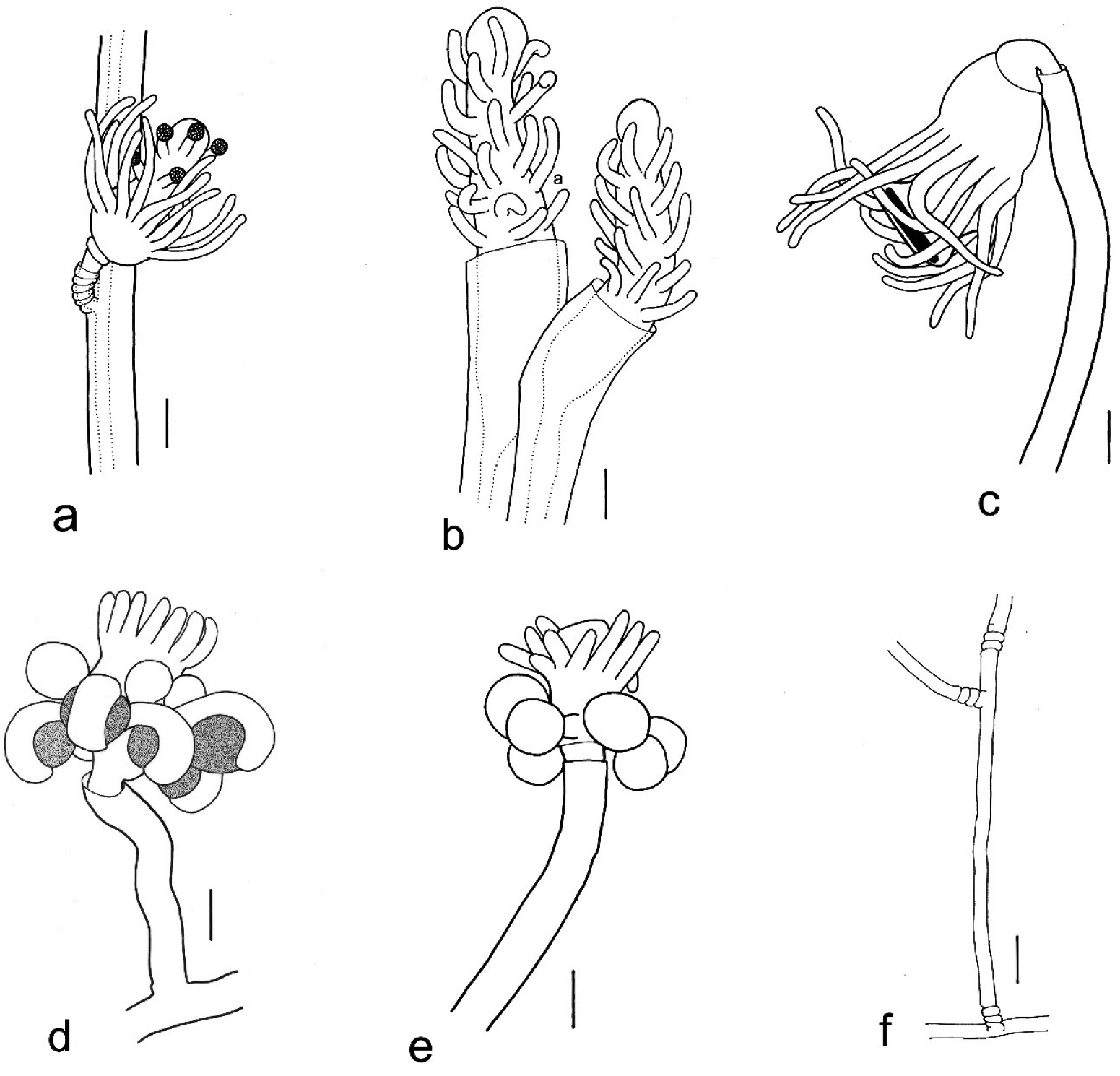