Etymology. The specific name refers to the type locality.

Diagnosis. Aseptis torreyana  is a smaller species Aseptis  , similar in size to A. susquesa  , A. monica  , A. serrula  and A. characta  . In maculation it most resembles A. serrula  , but it has a much paler ground color and a prominent discal spot on the hindwing, which is missing in serrula  . A. serrula  is a dark gray species with a black dusting. The pale ground color and finely outlines spots are somewhat similar to those in A. pausis  , which flies at the same time in the same locality. However, A. pauses  is considerable larger and has a prominent black basal dash on the forewing. In genitalic morphology, A. torreyana  resembles A. serrula  more than other species of Aseptis  . The valve shape is very similar to that of serrula  ( Fig. 45View FIGURES 40 – 63), and the everted vesica is essentially identical, but in torreyana  the valve is makes a more pronounced angle and the clasper (a fingerlike projection in the middle of the valve) is S­curved in torreyana  ( Fig. 44View FIGURES 40 – 63 a), while it is straight in serrula  . Importantly, serrula  is known only from the mountain­desert transition zone and deserts of southern California, while torreyana  is known only from the coastal salt marsh in La Jolla.

Distribution and habitat. This species was encountered during a survey of the moth fauna of the Torrey Pines State Reserve in coastal San Diego County. Because it was not captured during two long­term projects only a few miles away (i.e., Peñasquitos Canyon and Marine Corps Air Station Miramar), it appears that it is restricted to the coastal salt marsh habitat of the Torrey Pines State Reserve, where both specimens were collected in late April. 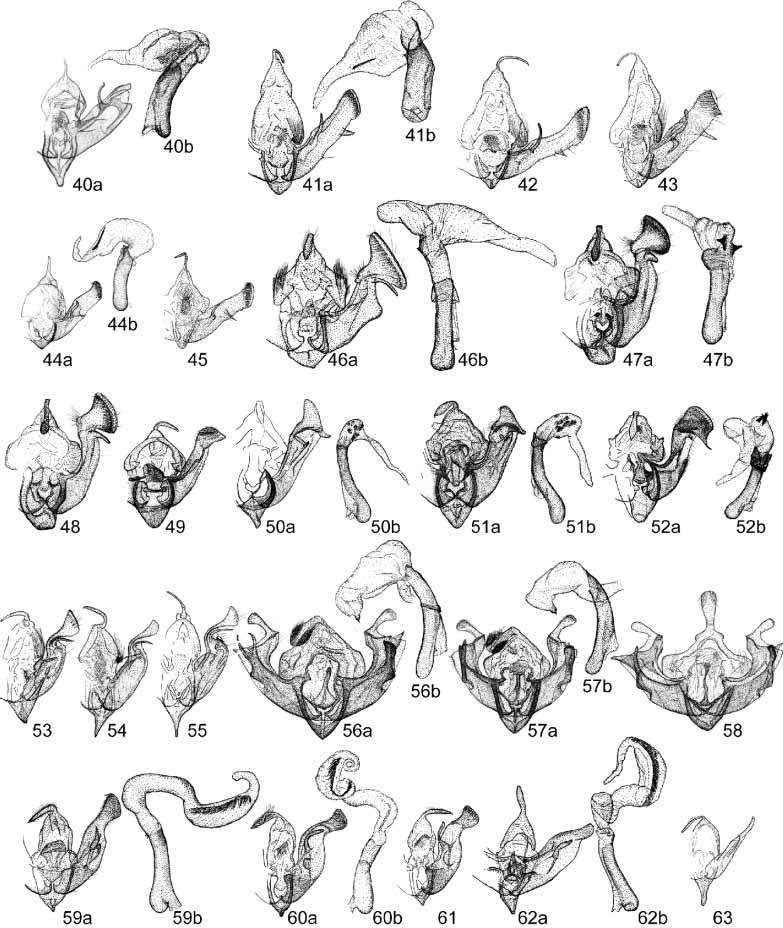