Note. The revision of this specimen was necessary because Burnham (1983: fig. 18) did not figure vein ScA and because the convexity of main veins was unknown, partly indicated in Kukalová­Peck & Brauckmann (1992), but with some differences with the present re­description. These last authors figured several veins at the wing base, which they named ‘MA’, ‘CuA’ and ‘AA 1 ’. These veins are not visible on the fossil, particularly because there is a common basal stem of R + M + CuA.

Re­description. Counterpart of a nearly complete forewing perfectly preserved with only the apex missing. Preserved length 46.0 mm, width 15.1 mm; ScA reaching anterior margin 12.3 mm from wing base; ScP anteriorly pectinate, with branches simple and slightly sigmoidal; base of RP 18.5 mm distal of wing base; ScP and R (+ M + CuA) basally separated; presence of a common stem R + (M + CuA); RA convex, anteriorly pectinate, with its branches dichotomously ramified; first branch of RA 8.7 mm distal of base of RP; area between RA and RP with sigmoidal cross­veins; convexity of RP neutral; RP dichotomously ramified distally, with one anterior branch fused with posterior branch of RA; CuA separated from M in the basal third of the wing; M dichotomously ramified into MA and MP; first anterior branch of MA close to RP, dichotomously ramified; area between branches of RP and branches of M with more or less regularly spaced straight cross­veins; free part of CuA short, basal of its fusion with CuPa; CuA + CuPa posteriorly pectinate, with its two first posterior branches concave; sigmoidal cross­veins between M and CuA + CuPa; CuPa short basal of its fusion with CuA; CuPa with an apical fork; a network of irregular cells in area between CuA + CuPa and CuPa; division of CuP into CuPa and CuPb near wing base; an anterior branch of CuPb (CuPb), lost in the network between CuPb and CuPa, posterior branch of CuP (CuPb) divided into three long branches; area between CuPa/CuPa and CuPb very broad (largest width opposite origin of CuPa /CuPa), with an irregular network of cells; 1 A apparently separated from CuP close to the base of the wing, distally ramified; three main veins in anal area basal of 1 A, only the third being branched.

Comparison with other Geraridae   . Gerarus bruesi   is very similar to Gerarus danielsi   . These two taxa share: (1) a simple MA 2 or very distally ramified; (2) an anterior branch of MP simple or very distally ramified; (3) a network of cells in area between CuPa/CuPa; (4) a densely ramified CuPb. Gerarus vetus   , as figured by Kukalová­Peck & Brauckmann (1992: fig. 13), has different right and left forewings, with apparently different organisation of veins MA, MA 1, MA 2 and MP. Nevertheless, the right forewing has an anterior branch of MA very close to RP and these veins being connected by a short crossvein. This character is also present in Gerarus bruesi   . 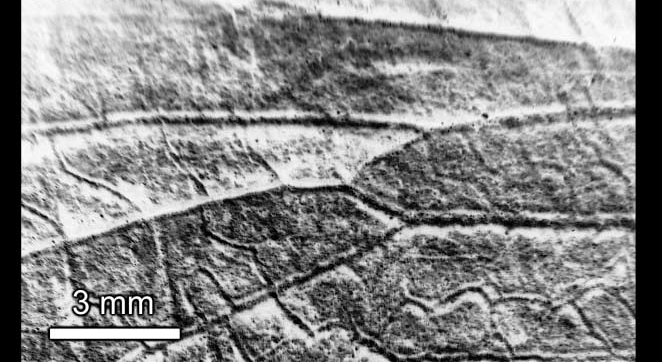