Etymology. After Professor Eugenio de Jesús Marcano, who collected the first giant tortoise fossils discovered on Hispaniola that were described by Franz & Woods (1983).

Diagnosis. Thin-shelled, large-bodied testudinid tortoise with adult humerus much larger than in C. alburyorum  but probably smaller than in C. sombrerensis  ; humerus more slender than in C. alburyorum  or C. cubensis  ; M. latissimus dorsi  muscle scar on lateral surface better defined than in C. monensis  but not as prominent as in C. cubensis  ; humeral shaft rounded/oval or slightly triangular and approximately as long as wide in middle shaft cross-section, unlike the narrower, deeper shaft of C. cubensis  . Femur with maximum distal width markedly greater than maximum proximal width in single available young specimen, versus the equal proximal and distal widths shown by C. alburyorum  . External carapace surface showing sulci with edges raised as distinct low ridges, unlike the indistinct and scarcely apparent sulci of C. monensis  , C. sombrerensis  , and the undescribed giant tortoises from Navassa and New Providence; gular scutes much shorter than in C. cubensis  , with sulci defining their posterior border curving posteriorly rather than anteriorly as in C. alburyorum  .

Remarks. We interpret our new collection of giant tortoise fossils as all representing a single species, as the multiple humeri in this collection exhibit no morphological differences other than ontogenetic variation, and the fossils were all preserved in comparable depositional conditions with similar co-occurring vertebrate faunas, suggestive of similarity in geological age. The humeri in our new collection are also indistinguishable from the single chelonian humerus from Bayaguana previously described and illustrated by Franz & Woods (1983), and our new carapace and plastron fragments show identical morphological characteristics to the Bayaguana material, so we refer all of the known giant tortoise specimens from Hispaniola to the same new species.

Although carapace and neural characteristics that can be used to differentiate Chelonoidis  from other New World testudinid genera (cf. Franz & Franz 2009) cannot be determined from available material of the new species, several characters of the humerus (the best-preserved and most commonly represented element in our collection) support genus-level assignment of the new species to Chelonoidis  rather than to North American xerobatin testudinids ( Gopherus  , Hesperotestudo  ), the other candidate genera to which the extinct Caribbean tortoises might be referable ( Williams 1952; Auffenberg 1974; Meylan & Sterrer 2000). Unlike the Hispaniolan giant tortoise, mainland Neotropical Chelonoidis  species or C. alburyorum  , the humeri of Gopherus  and of mainland and insular Hesperotestudo  species lack either an obvious insertion site for M. latissimus dorsi  , or an entepicondylar groove or foramen; the greater trochanter also does not extend beyond the head of the humerus in Hesperotestudo  , in contrast to the marked extension of the greater trochanter in the Hispaniolan giant tortoise and other Chelonoidis  species, and this character is interpreted as a derived condition in Chelonoidis  ( Auffenberg 1963; Meylan & Sterrer 2000; Franz & Franz 2009). The shell of the insular Hesperotestudo bermudae  is also not markedly thinner than in mainland American xerobatin testudinids ( Meylan & Sterrer 2000), in contrast to the very thin-walled shell seen in the Hispaniolan giant tortoise and other described Chelonoidis  species ( Franz & Franz 2009). Whilst variation in shell thickness may represent an ecological response to insular environmental conditions (e.g. absence of predatory mammals) rather than a phylogenetic signal, the shell state in the Hispaniolan tortoise is consistent with that described for species of Chelonoidis  .

We therefore consider that even in the absence of information on skull morphology or detailed shell morphology, the Hispaniolan tortoise can be confidently referred to Chelonoidis  on the basis of comparative postcranial characteristics. This taxonomic hypothesis is consistent with other available data on Quaternary testudinid biogeography for the insular Caribbean, as Chelonoidis  definitely occurred on the nearby Bahamian Archipelago ( Kehlmaier et al. 2017). The only potentially unusual characteristic shown by the Hispaniolan tortoise compared to well-described Chelonoidis  species is the apparent absence of diagnostic interior sculpture on entoplastral elements in the new collection, but this may simply reflect the limited preservation of available incomplete entoplastral specimens from the new species.

Detailed comparison with other Caribbean giant tortoises is more difficult due to the limited material available from other islands, but diagnostic differences can also be identified between the Hispaniolan species and other previously described Caribbean tortoise taxa. Humeral measurements have not been reported for C. cubensis  or C. monensis  , but C. cubensis  differs from the Hispaniolan species in having a shorter, more robust humerus with a shaft depth c.1.5 times the shaft width and that shows a much more strongly developed, extremely large and deep M. latissimus dorsi  muscle scar, and also in having an extremely elongate gular scute and a prominent “bird face” sculpture on the entoplastron ( Williams 1950; Franz & Franz 2009); and C. monensis  conversely differs from the Hispaniolan species in reportedly having a reduced M. latissimus dorsi  muscle scar that merely consists of a roughened area rather than a pit ( Williams 1952). Chelonoidis sombrerensis  is much more poorly known; one described humerus is similar in length to that of the Hispaniolan species (estimated at approximately 130 mm), but this specimen lacks both ends and so may not be fully grown; another reported humerus for this species is markedly larger (approximately 300 mm), and with a considerably greater shaft depth than in the Hispaniolan species (1.3 times the shaft width) ( Julien 1878; Williams 1952). The Hispaniolan species also differs from C. monensis  , C. sombrerensis  , and the undescribed “moderate-sized” tortoises from Navassa and New Providence in having carapace sulci with raised ridges rather than having sulci that are indistinct and scarcely apparent ( Auffenberg 1967); carapace sulci defined by raised edges along their margins are otherwise only shown by C. alburyorum  and C. cubensis  in the Caribbean region ( Williams 1950; Franz & Franz 2009). 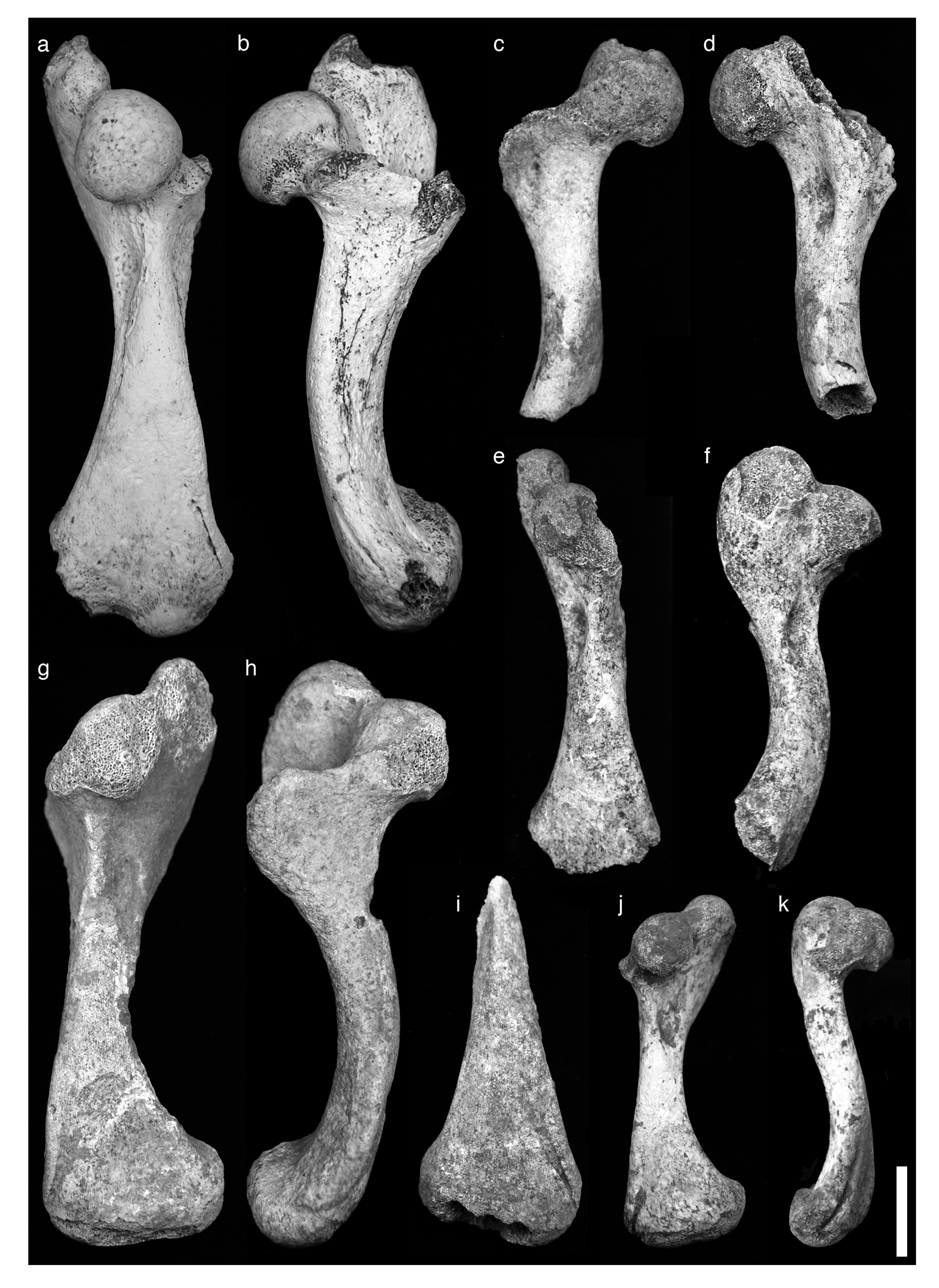