Head capsule. Length 0.36–0.38 mm; width 0.16–0.18 mm. Head capsule is prognatous and hemicephalic. It is elongate-oval in shape, slightly depressed dorsoventrally and, differently from the head capsule of the last instar larvae, just slightly sclerotised ( Fig. 18View FIGURES 18 – 27). Internolateralia and externolateralia are separated by incisions, which reach almost half-length of head capsule; each incision is continuous with deep groove (the most sclerotised part of head capsule) that extends almost to the base of antenna. Externolateralia are widely separated on the ventral side of capsule ( Fig. 19View FIGURES 18 – 27). Premaxillary suture separates side plates from the rest of head capsule. Side plate is wedgeshaped with a long anteromedial seta. Hypostomium is strongly sclerotised. It bears five sharp teeth. The outhermost teeth (both on dorsal and ventral part) are much smaller than the other. Small incision is on posterior part of hypostomium ( Fig. 20View FIGURES 18 – 27). Basally the hypostomium is fused with ventral margins of genae and with side plates. Prementum is visible from below. It is very similar to that of Ct. guttata  . Frontoclypeus is short (4 / 5 times as long as internolateralia) and fused with internolateralia. Internolateralia are separated by fold on posterior part ( Figs. 18, 19View FIGURES 18 – 27). Internolateralia are much longer than externolateralia. Clypeal part of frontoclypeus is membranous and separated from labrum by deep fold. There are four short setae on the anterior part of clypeus. A short seta is situated below the anterior part of clypeus towards the base of antenna. There are four short setae below the base of antenna ( Fig. 18View FIGURES 18 – 27). Ecdysial and coronal sutures are not visible. Labrum is rectangular in shape and composed of two wedge-shaped sclerotised plates separated by membranous areas. Each labral lobe has distinct triangularly shaped outgrowth directed outward ( Fig. 21View FIGURES 18 – 27). Apical part of labrum and ephipharynx are covered with numerous hairs. One long and one short seta present on membranous part on each side of labrum ( Fig. 22View FIGURES 18 – 27). One long, one medium-length, two short setae and one sensory pit present on anteriolateral part, two sensory pits present on medial part, one short and one very short setae are located on posterior part of labral lobe. Antenna is short and composed of one cone-shaped segment, almost as long as wide at base ( Fig. 23View FIGURES 18 – 27). It has a large cone-shaped and a few small peg-like apical sensillae and subapical posterodorsal sensory pit. Mandible is one-segmented and much more sclerotised than the rest of head capsule. Five sharp teeth are present on both mandibles ( Fig. 24View FIGURES 18 – 27). Apical, first ventral and dorsal teeth are the most prominent. Second dorsal and second ventral teeth are much smaller. Prostheca or lacinia mobilis present on the dorsal side of inner surface of mandible ( Fig. 24View FIGURES 18 – 27). Lacinia mobilis is arch-shaped, with 9–10 sharp small teeth on apical part and with cushion of long hairs in the middle. Lateral surface of mandible has two very short setae at the base. A sensory pit is present at the base of dorsal side. Mandibles operate in horizontal plane. Inconspicuous larval eye spot is present below the base of mandible. Maxilla has triangularly shaped cardo, which bears two almost equal setae near the distal end ( Fig. 25View FIGURES 18 – 27). There are two sclerites on stipes. The inner sclerite extends around inner margin of maxilla onto its dorsal surface and the outer sclerite extends around outer margin of maxilla to its dorsal surface ( Fig. 25View FIGURES 18 – 27). Galea and lacinia are fused. Galea is covered with numerous short hairs. There are three long sensory structures on the ventral side of galea. Lacinia has three sharp pointed outgrooves on the outer margin.

Spiracular disc. Spiracular field is surrounded by four flat and elongate round-tipped lobes ( Fig. 32View FIGURES 28 – 32). Lateral lobe is prominent, its length almost 1.5 x the width at the base. It has two long stout apical bristles. Each bristle is almost six times as long as the lobe itself and about as long as one-third of the whole body. Three tufts of two short bristles each present on dorsal part. There are three tufts of long bristles above the spiracles. The innermost and outermost tufts consist of two bristles, the middle tuft consists of three bristles. Ventral lobes are almost as long as wide at the base. A tuft of four long bristles is on the apical part of lobe and a tuft of three slightly shorter bristles is on inner part; two tufts of two short bristles each present on the outer margin; a tuft of four bristles different in length and a single bristle are at the base of lobe. Both pairs of lobes are almost completely covered with large, wedge-shaped sclerites. Spiracles are large, oval and close to each other. Distance between them is almost the same as diameter of a spiracle itself. 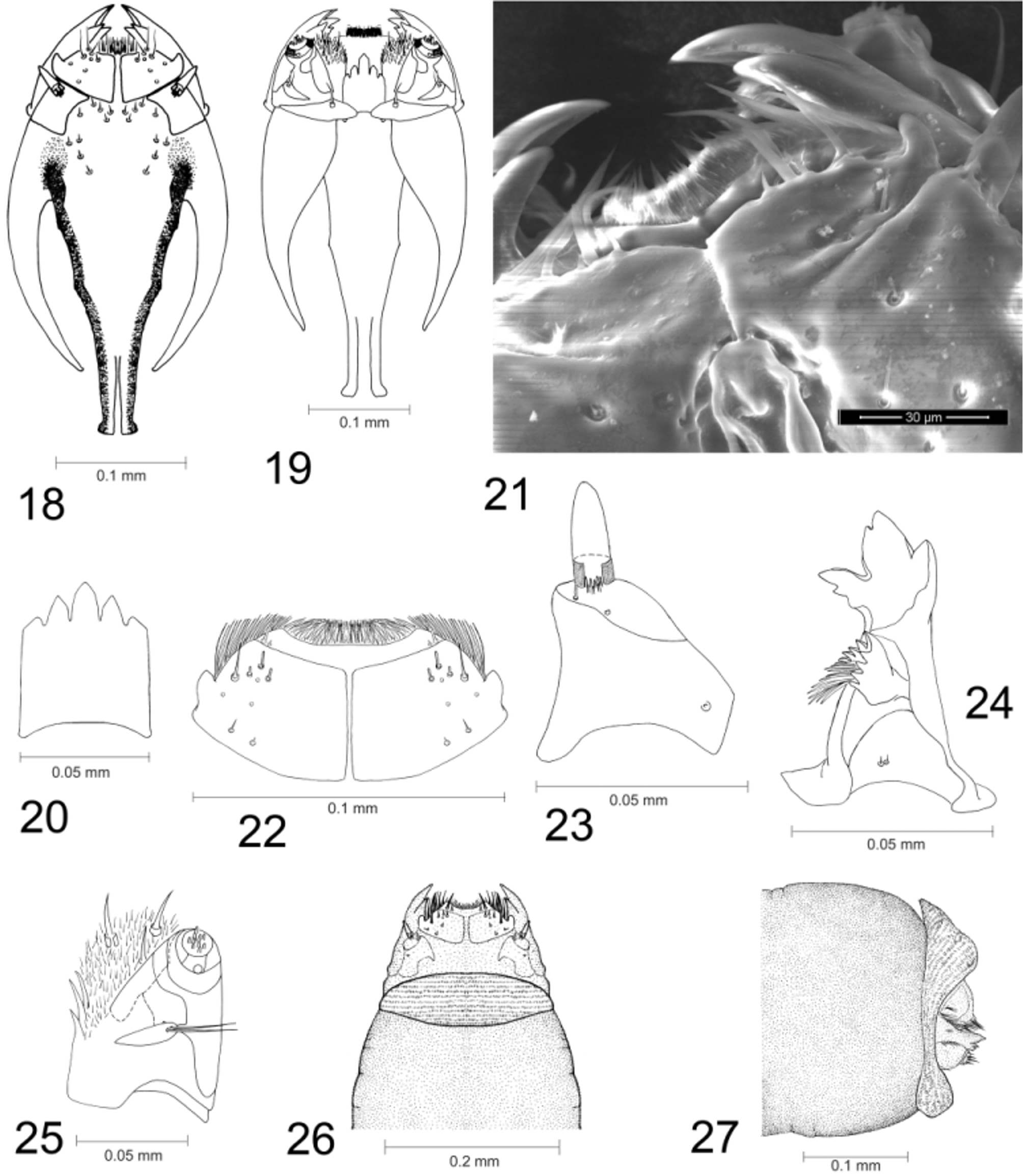 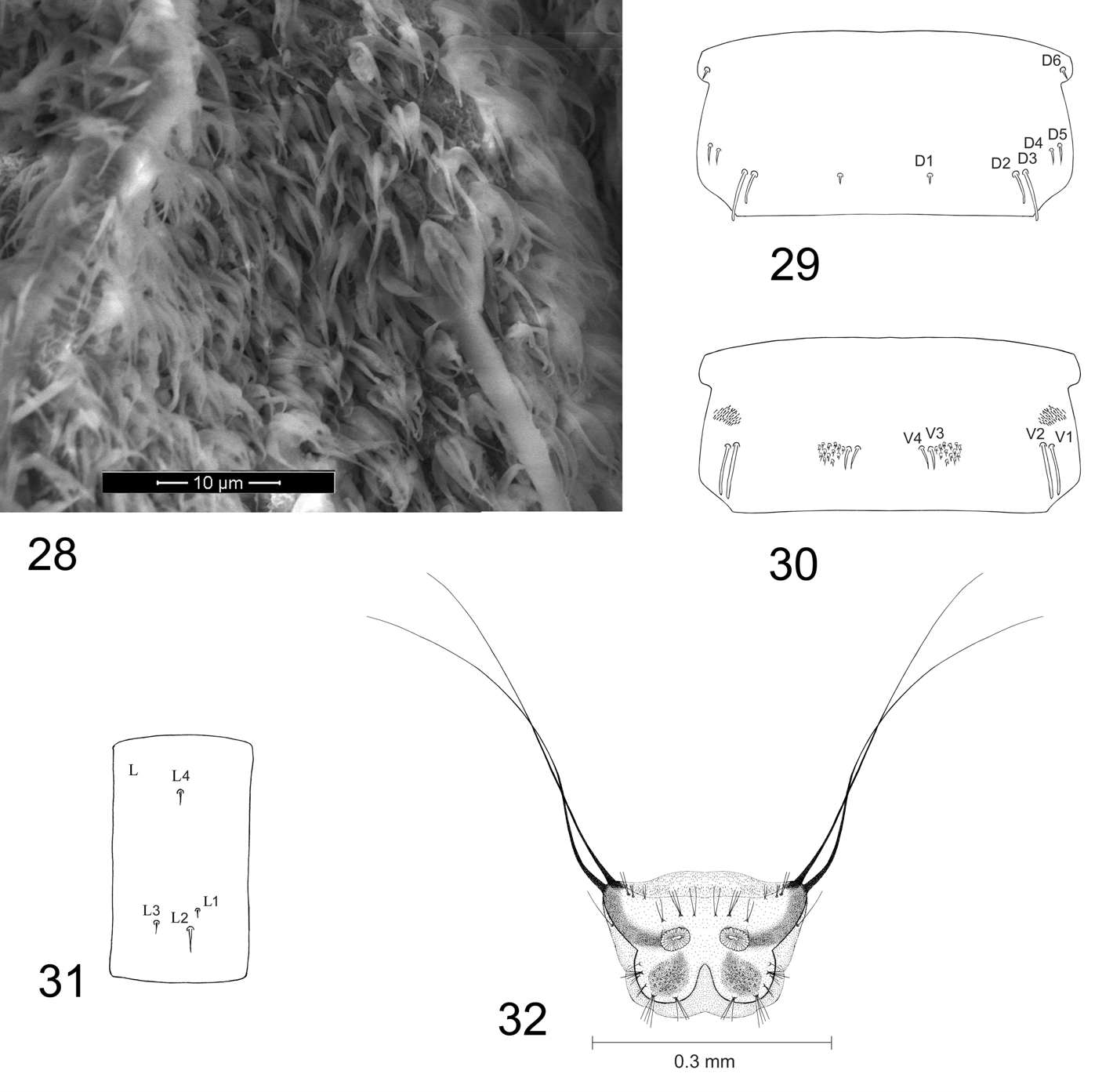