Description. Athecate hydroids with colonies predominantly erect, mostly growing in tangled masses of stolons, stems, and branches, reaching up to 2.5 cm high; erect colonies sparingly and irregularly branched, with hydrocaulus and branches monosiphonic and similar in form; tendrils occasionally present. Perisarc moderately thin, golden- to straw-coloured, terminating at hydranth base, mostly wrinkled but with some smooth parts, usually wrinkled at bases of pedicels or stems. Hydranths clavate, about 0.7-1.3 mm long, 0.3–0.5 mm wide, proximal end with narrow annular epidermal thickening, distal part of fully-developed hydranths with about 12-20 tentacles; tentacles solid, capitate, in 3-4 irregular whorls, those of one whorl alternating with those of adjacent whorl or whorls, tapering towards distal end from relatively broad base, becoming narrowest just below terminal acrosphere, distal tentacles usually longer than proximal ones; acrosphere nearly round except for slightly flattened proximal side, heavily armed throughout with nematocysts; hypostome large, dome-shaped, endoderm flesh-coloured to reddish orange. Proximal filiform tentacles absent.

Significant crypsis is known to exist within Sarsia ( Edwards 1978, 1983; Brinckmann-Voss 1980, 1989, 2000), and hydroids of the various species can be difficult to distinguish on the basis of trophosome morphology alone ( Schuchert 2001b, 2012). At least three species in the genus, S. lovenii , S. tubulosa , and S. occulta Edwards, 1978 , occur in boreal waters of eastern North America . Their hydroids can be identified with confidence only when gonophores are present, with those of S. lovenii remaining attached as fertile medusoids, those of S. tubulosa being liberated as free but immature medusae that ripen in the plankton, and those of S. occulta being released as free medusae with at least partly developed gonads (although ripe medusae may infrequently be retained on the hydranths) ( Edwards 1978, 1983; Schuchert 2001b, 2012). While it is likely that all three species occur in the Bay of Fundy , only S. tubulosa and S. lovenii are currently known from there (see Appendix 1). Hydroids of Sarsia occulta , identified from fertile material, are known both north (Labrador: Red Bay, 51°43’47”N, 56°26’20”W, on algae at low tide, 25 June 2000, 4°C, 32‰, coll. D. Calder, ROMIZ B3290) and south (New Jersey: Barnegat Inlet near Barnegat lighthouse, 39°45’51”N, 74°06’24”W, on rocks and algae from rock rip-rap near low tide, 12 March 2002, 6°C, 32‰, coll. D. Calder, ROMIZ B3517) of the bay. Other records of S. occulta in the western North Atlantic, according to Edwards (1978: 293), include some of the hydroids identified as Syncoryne mirabilis by L. Agassiz (1860: pl. 17, fig. 12) from Massachusetts and by Berrill (1953: figs. 1E, 2B) from Maine. Sarsia occulta differs from S. lovenii in having colonies that are predominantly stolonal rather than upright and branched, and medusa buds with marginal tentacles that are well developed instead of undeveloped or vestigial. GoogleMaps

Given the morphological similarity of hydroid stages of these three species, taxonomic confusion has prevailed about them for many decades. Russell (1953), Edwards (1978), and Schuchert (2001b) noted that hydroids of Sarsia lovenii have often been assigned by mistake to S. tubulosa or its synonyms. Indeed, illustrations of specimens from Massachusetts that were labelled as Coryne mirabilis ( L. Agassiz, 1850) (= S. tubulosa ) by L. Agassiz (1860, pl. 17, figs, 10, 11, 13–16), and H.J. Clark (1865b: fig. 42), and probably those of A. Agassiz (1865: figs. 286, 288) and Nutting (1901a: figs. 3, 3A) as well, correspond instead with fertile specimens of S. lovenii . So too do hydroids identified as Sarsia mirabilis from Massachusetts in an illustration by Mayer (1910a: pl. 3, fig. 5) and as Syncoryne eximia ( Allman, 1859a) (= Coryne eximia ) from the Gulf of Maine by Berrill (1953: fig. 10). Authors including L. Agassiz (1862: 189–190, 203–204), H.J. Clark (1865: 77–79), and Mayer (1910a: 54, 55) maintained that Coryne mirabilis released immature free medusae during winter in southern New England, but that gonophores of the species became mature while still attached to the hydroid as water temperatures rose in spring. Similar observations were reported by Berrill (1953: 276–279) in studies of corynids from Maine. Based on life cycle studies undertaken in the laboratory, however, Edwards (1978: 310) presented evidence that gonophore types in S. tubulosa , S. lovenii , and S. occulta do not change with varying temperatures. He concluded that Agassiz, Mayer, and Berrill had made observations on a complex of species rather than on a single one. The opinions of Edwards are followed here, although taxonomic questions remain about species of Sarsia on this coast.

The identity of hydroids identified as Syncoryne mirabilis from Newfoundland by Leloup (1939: fig. 1B), is uncertain. At least some reports of S. mirabilis from the boreal western North Atlantic, including the Bay of Fundy (see Fraser 1944) may have been based in whole or in part on Sarsia lovenii . In the absence of detailed descriptions and illustrations, however, it is impossible to determine which ones might have been based on that species. Meanwhile, Fraser’s (1912) report of Syncoryne mirabilis from floating Sargassum at Beaufort, North Carolina, is more likely to have been based on specimens of Coryne sargassicola Calder, 1988 , a warm water species prevalent on the same pelagic substrate.

Broch (1916) justifiably regarded S. lovenii as a cold water species, with the most luxurient colonies occurring toward the northern limits of the boreal zone. Colonies kept in the laboratory by Edwards (1978) in Scotland developed gonophores during spring and early summer at temperatures from 8.4–11.8°C. Common substrates include fucoids, stones, and mussels occurring in shallow waters ( Broch 1916; Edwards 1978; Schuchert 2001b). In the Bay of Fundy region, dense colonies of S. lovenii with well-developed medusoids were discovered on rocks and fucoids during late spring in an intertidal brook running from a brackish pond into Passamaquoddy Bay near Letete, NB ( ROMIZ B3106). Fertile colonies were also collected just below the water surface on mussels ( Mytilus edulis ) from a floating pontoon slip of a wharf at Back Bay, NB ( ROMIZ B3096). At the head of the bay, in Minas Basin, NS, hydroids of S. lovenii with a few immature medusoids were obtained at ELWS in slushy seawater during late winter near Kingsport ( ROMIZ B4226). Sarsia lovenii is known to tolerate reduced salinities ( Schuchert 2001b, 2012), and the appearance of the hydroid colony can vary depending on the strength of water currents ( Vervoort & Faasse 2009).

On the Atlantic coast of Canada beyond the Bay of Fundy , specimens of Sarsia lovenii have been collected northwards to western Newfoundland (south of St. Paul’s , ROMIZ B1307; Raleigh Harbour, ROMIZ B3274; north of Sally’s Cove on wreck of S.S. Ethie, ROMIZ B3281) and southern Labrador (L’Anse Amour, ROMIZ B3285, ROMIZ B3286). The known range of the species in the western North Atlantic thus extends from localities in the Strait of Belle Isle to Massachusetts . In the eastern Atlantic, it has been reported from the White Sea to the English Channel ( Schuchert 2012). It is also known from Iceland and Greenland ( Schuchert 2001a, 2012). The reported bathymetric range is 0-200 m ( Naumov 1960).

The cnidome of specimens examined here corresponded with that reported by Schuchert (2001b) in material of the species from Europe. Isorhizas and stenoteles of two size classes were present in hydranths, while isorhizas, microbasic mastigophores, and stenoteles were found in medusoids ( Fig. 5 View FIGURE 5 ). Slight differences noted in size were not considered taxonomically significant, with overlaps occurring in most of the measurements.

Recorded distribution. Bay of Fundy: recorded for the first time. 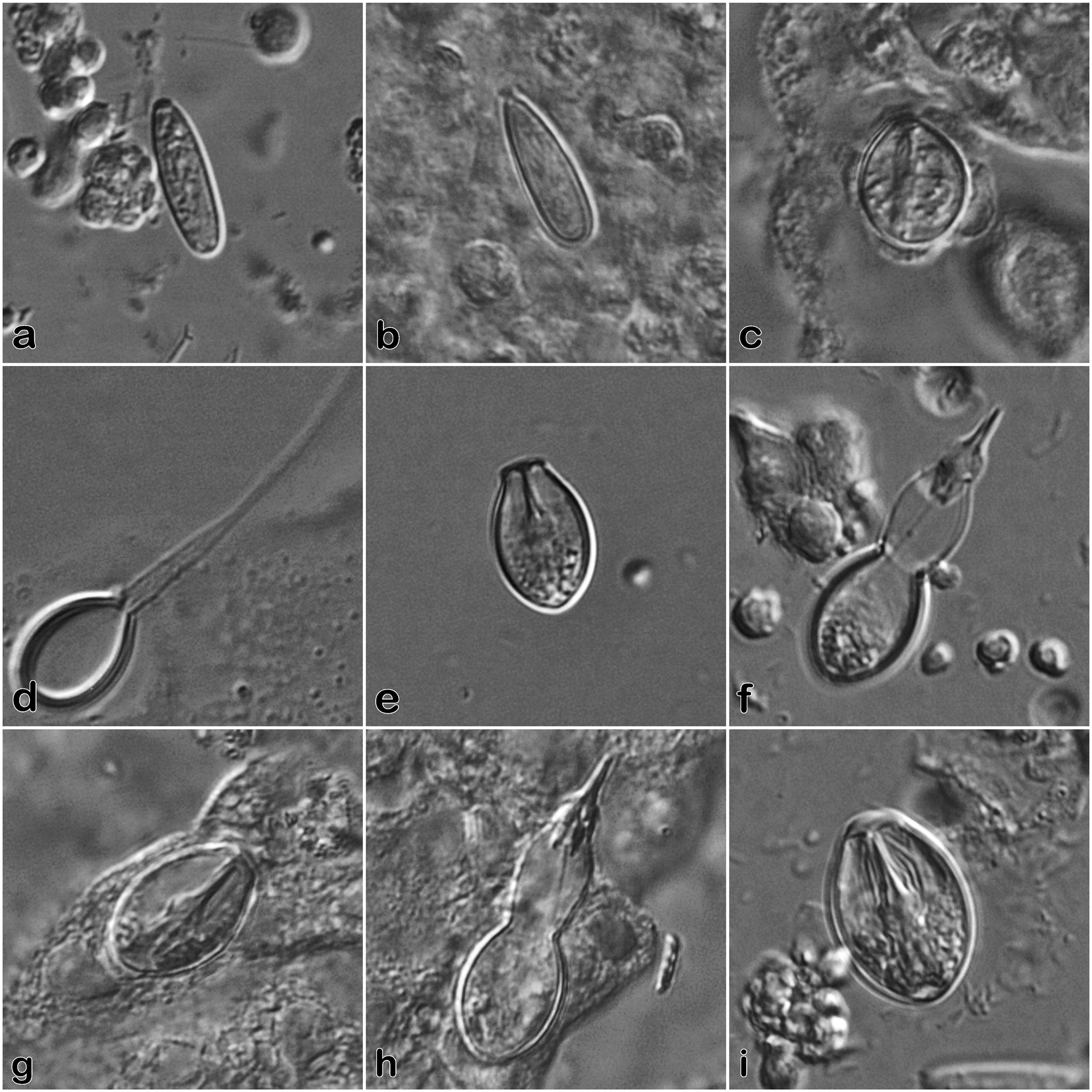