Description. Semiglobular ( Fig. 48View FIGURE 48 a) with hispid surface, encrusted with shells and barnacles. Size 2.5 cm in diameter, 2 cm high. Color in alcohol light beige. One specimen from French Guyana photographed by CREOCEAN—if correctly recognized—has an on deck color of brown to redbrown.

Skeleton. Strictly radiate, with dichotriaenes dominant as a palisade at the surface, as well as present subcortically, where the cladomes carry small open spaces. Oxeas and other triaene types less common.

Oxyasters ( Figs 48View FIGURE 48 h), with spines concentrated near the apices of the rays, diameter quite variable, but ray number variation limited, so the asters are not readily divisible in distinct types; diameter 6–11.8–15 µm, ray number 7–12.

Etymology. Named after Prof. Dr Wim Vervoort, 1917–2010, former director of the Rijkmuseum van Natuurlijke Historie, and distinguished marine invertebrate taxonomist (Hydrozoa, Copepoda). Vervoort was the biologist on board of the Guyana Shelf Expeditions 1966–1970, responsible for the collection of the sponges in the present collection.

Remarks. The new species shares dichotriaenes with one other Central West Atlantic Stelletta  species, viz. Stelletta ruetzleri Mothes & Silva, 2002  from the Brazilian SE coast, but that species lacks anatriaenes and has a thick crust of spheroxyasters at the surface. On paper, Ancorina individua Schmidt, 1870  from ‘Antillen’ and St. Croix could be conspecific with our material if Schmidt’s remark that it possesses ‘etwa 5 Ankervarietäten’ conforms to our diversity of triaenes. There are several ‘wet’ specimens (globular and of different sizes) from one of the two localities (St. Croix) in the Copenhagen Museum (confirmed by P. Cárdenas, pers.comm.), but no (re-)description of that syntype material has so far been made. A slide made from one of the St. Croix specimens was examined by me, and it revealed that there is indeed a large diversity of triaenes, dominated by various shapes of anatriaenes, but there are no dichotriaenes shaped like the above-described. Asters in the microscopic section are small and probably of a single type, but shape (oxyasters or tylasters) is uncertain due to the thickness of the slide. Additionally, the Natural History Museum (London), has a spicule slide from the Schmidt’s collection labeled ‘ Ancorina individua  “121”, BMNH 1870.5.3.53 (re-examined by me). This conforms in its spicule composition to the Copenhagen type material. Due to the absence of dichotriaenes in Ancorina individua  it is not likely to belong to the same species as the above described.

The boreal North Atlantic / Arctic species Stelletta rhaphidiophora Hentschel, 1929  , as redescribed by Cárdenas & Rapp (2015), has similarly shaped dichotriaenes and plagiotriaenes, and oxyaster microscleres, but it lacks anatriaenes and the oxyasters have smooth rays, unlike our new species. Likewise, the North Atlantic widespread deep-sea species Stelletta tuberosa ( Topsent, 1892a)  as redescribed by Cárdenas & Rapp (2015), looks superficially like our new species, but the dichotriaenes have rhabdomes and cladi more than twice as thick, and oxyasters three times as large as those of our new species.

The Guyana material appears to belong to the same species as the specimen described previously as Stelletta  spec. by Van Soest & Stentoft (1988). The spicule complement is closely similar: the protriaenes mentioned by Van Soest & Stentoft are in fact plagiotriaenes with short conical cladi such as found in several regional Stelletta  ’s. A further difference would seem to be the small ‘chiasters’ of 3–6 µm diameter mentioned by these authors, but subsequent reexamination of the slides of the specimens demonstrated that these are oxyasters in a size range of 3–16 µm, quite similar to the present Guyana holotype. 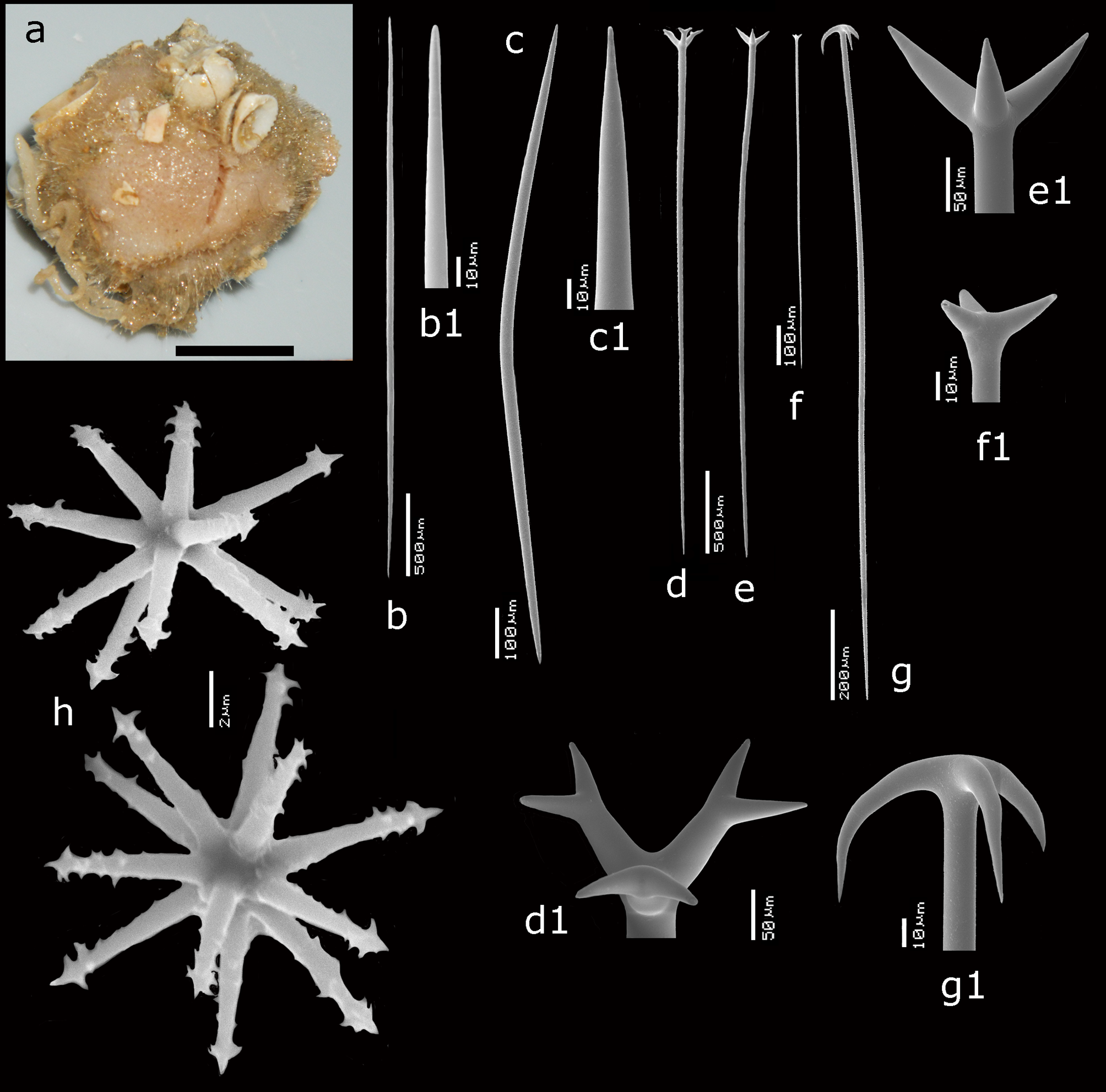