Description. Four circular flattened hemispherical sponges each with a fringe of long spicules. The largest individual is shown in Fig. 76View FIGURE 76 a. Upper surface provided with a few low papillae arranged around a slightly larger central papilla, hispid inbetween the papillae and covered with a thin layer of sediment. Undersurface conical, smooth. Sizes vary from 11–18 mm in diameter, 3–5 mm in thickness. Color pale beige in alcohol. Consistency tough.

Skeleton. ( Fig. 76View FIGURE 76 b) In cross section, from lower to upper parts the skeleton consist of a bed with thickness approximately 400–500 µm of long subtylostyles protruding far beyond the central disk as a fringe. Above this, there is a 1 mm thick confused mass of criss crossed tylostyles, on top of which there are tracts of longer and smaller tylostyles approximately 2 mm long, radiating towards the surface. Small tylostyles are concentrated at the surface but are also scattered in the tracts.

Subtylostyles ( Figs 76View FIGURE 76 c,c1), longest of the monactinal spicules, from the bottom parts of the skeleton, elongately fusiform, with style-like head (tyles not visible), mostly broken in the slides, unbroken spicules from 1.5–2.1 mm, but presumably considerably longer up to 4 mm or more, thickness 12–36 µm.

Remarks. The specimens from the Guyana shelf are slightly smaller in diameter than Schmidt’s specimen from 1176 m depth off Cuba (2 cm, cf. Boury-Esnault 2002 (p. 213), and the upper surface is more flattened (cf. Boury-Esnault 2002 (fig. 10C). Schmidt’s drawing has a less convex flattened upper surface than shown by Boury- Esnault. In other aspects the Guyana specimens are closely similar to the type  . There is also considerable similarity (perhaps more so than with the type specimen of Radiella sol  ) with specimens of Trichostemma sarsii Ridley & Dendy, 1886  (= Radiella sarsii  ), described from the Azores at 1800 m depth. Possibly, this is a junior synonym of Radiella sol  .

Recently, Plotkin et al. (2016b) sequenced a representative set of polymastiid species and found that the genus Radiella  was not monophyletic: Radiella hemisphaerica ( Sars, 1872)  clustered with Polymastia  species, while Radiella sarsii  was in the same strongly supported clade with Spinularia spinularia ( Bowerbank, 1866)  , the type species of the genus Spinularia Gray, 1867  . Since Spinularia  is an older name than Radiella, Plotkin et al. (2016b)  concluded that Radiella  is a junior synonym of Spinularia  . However, this conclusion is premature because the properties of Radiella  are determined by the type species, Radiella sol  , which has not been included in the molecular study. Even though it is likely that Radiella sol  —because it is quite similar morphologicallly to R. sarsii  —is indeed close to Spinularia  , I refrain from reassigning the present species to that genus until reliably identified material of Radiella sol  has been sequenced. 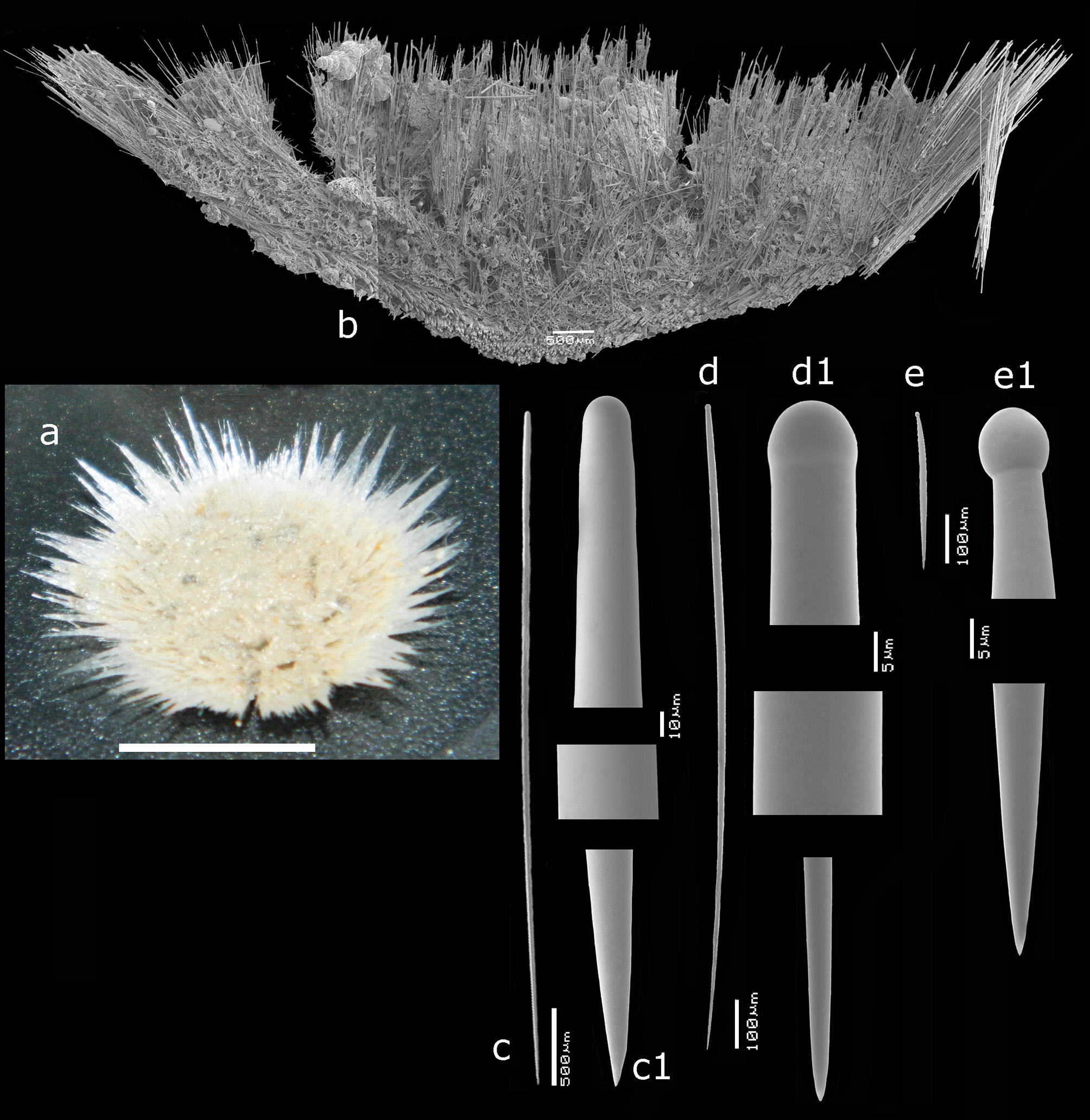