Description. Columnar, grey-brown sponge ( Fig. 60View FIGURE 60 a) with a deeply grooved rough surface. Grooves extending over its entire length. Height 12 cm, diameter 8 cm, with terminal vent of 1.5 cm diameter. Diameter largest about halfway the length of the specimen, constricted at the base (but not with a clear stalk) and gradually narrowing to a rounded upper part, with terminal vent flush with the surface. Consistency hard, incompressible. Several specimens photographed on-deck by CREOCEAN in French Gyanan waters have redbrown color outside and light-brown inside. Specimens showed lengthwise grooves which were often branching off or following an oblique course. Size may be up to 20 cm in height, 18 cm in diameter. Larger specimens may have additional oscules at the top of ribs separated by the grooves.

Skeleton. Cortical skeleton of 5 mm thickness, strictly radiate, consisting of a dense palisade made up of bouquets of oxeas, supported by a subcortical layer of aligned cladomes of the orthotriaenes and a thin layer of small thick-rayed spheroxyasters. In this region a few scattered sterrasters are found (arrows in Fig. 60View FIGURE 60 b), which are presumed to be proper despite their rareness. Choanosomal skeleton largely radiate, few loose megascleres, high spicular density, with scattered oxyasters.

Remarks. The genus assignment of this new species is tentative and based on the presence of a cortical skeleton of small oxeas with only very few scattered small sterrasters, carried by the cladomes of underlying orthotriaenes. At first the material was assigned to the genus Stelletta  , with as characteristic features of the new species the lengthwise grooved surface, the presence of orthotriaenes, three sizes of oxeas, in combination with choanosomal acanthoxyasters and small cortical acanthoxyspherasters. No descriptions of Central West Atlantic Stelletta  species match these features. The orthotriaenes are relatively small and thin compared to triaenes of other Ancorinidae  . The presence of a few small sterrasters in the slides of the present specimen were at first considered contamination, e.g. from Geodia gibberosa  collected in the same station. These are sparingly present in the region between the outer palisade of oxeas and the layer of subcortical cladomes of the orthotriaenes. It nevertheless induced me to consider the possibility that the present specimen could be a Geodia  with reduced presence of sterrasters. These spicules were of the same dimension (28–38 µm) as those described e.g. for Geodia tylastra Boury-Esnault, 1973  , likewise a grooved species, and several other Geodia  species. However, the sterrasters in Geodia  species form a thick ectosomal outer cortex differing strongly from the situation in the present species. Still, no Stelletta  species is known to have a similar outer cortical layer of aligned small oxeas, whereas many Geodia  species have their cortex supported with short cortical oxeas similar in size and shape to those of the present specimen. Furthermore, absence or rareness of aspidasters in the geodiid genus Erylus  , forming an ectosomal layer comparable to sterrasters in Geodia  , has been reported e.g. for Erylus deficiens Topsent, 1927  . Thus, with considerable hesitation I propose here to erect for the present material a new species of Geodia  , with as major  distinguishing character the virtual absence of sterrasters.

Apart from this virtual absence of a cortical layer of sterrasters, the new species shows similarities with four Central West Atlantic Geodia  species: G. neptuni Sollas, 1886  , G. vosmaeri Sollas, 1886  , G. tylastra Boury-Esnault, 1973  and G. corticostylifera Hajdu et al. 1992  all have a grooved and indented surface reminding of that of the new species, and their general spicule complement is closely similar in all four. G. neptuni  is large cup-shaped sponge with irregular grooved surface, not as deeply grooved as the new species. Its description by Sollas mentions the presence of an anatriaene and a further differentiation in larger and smaller ‘chiasters’ next to the spherasters, unlike the new species. There is apparently no differentiation in the oxeas, although later descriptions (e.g. Hajdu et al. 1992: table 2) do report cortical oxeas. The cylindrical G. vosmaeri  was distinguished by Sollas from G. neptuni  by the presence of cortical oxeas, which were upon re-examination found to occur also in G. neptuni  . He also described a very thin sterraster layer in the cortex, differing clearly from the thick sterraster layer of G. neptuni  . Wiedenmayer (1977) followed by Hajdu et al. (1992) declared the two species synonymous.

Judging from Muricy et al. ’s (2011) photo of the type of G. tylastra  (their fig. 7C) it is in shape inbetween the new species and G. corticostylifera  : globular with irregular deep grooves and pits. It is probably the closest to the new species of the four mentioned Central West Atlantic species. It differs in having the oxea length about half of those of the new species and by the presence of tylasters, lacking in the new species. There is no mention in the description of Boury-Esnault of the presence of cortical oxeas, and a differentiation of long-thin and fusiform oxeas has not been noted.

Hajdu et al. (1992) erected G. corticostylifera  on the basis of a semiglobular shape with pitted shape and the modification of the cortical oxeas to styles. Apart from the differentiation in long-thin and fusiform oxeas (which may have been overlooked), the spiculation is quite similar to that of the new species. Small differences in size appear in the cortical oxeas/styles (only up to 500 µm) and the orthotriaenes (only up to 1100 µm), leaving shape and the presence of the sterrasters as the main differences.

The possibility that variability will be found to exist in shape characters and relative thickness and presence of sterraster layers leading up to the existence of a single variable species encompassing all species discussed here can not be entirely excluded. Further work, supported by molecular sequences is needed to confirm or refute this. 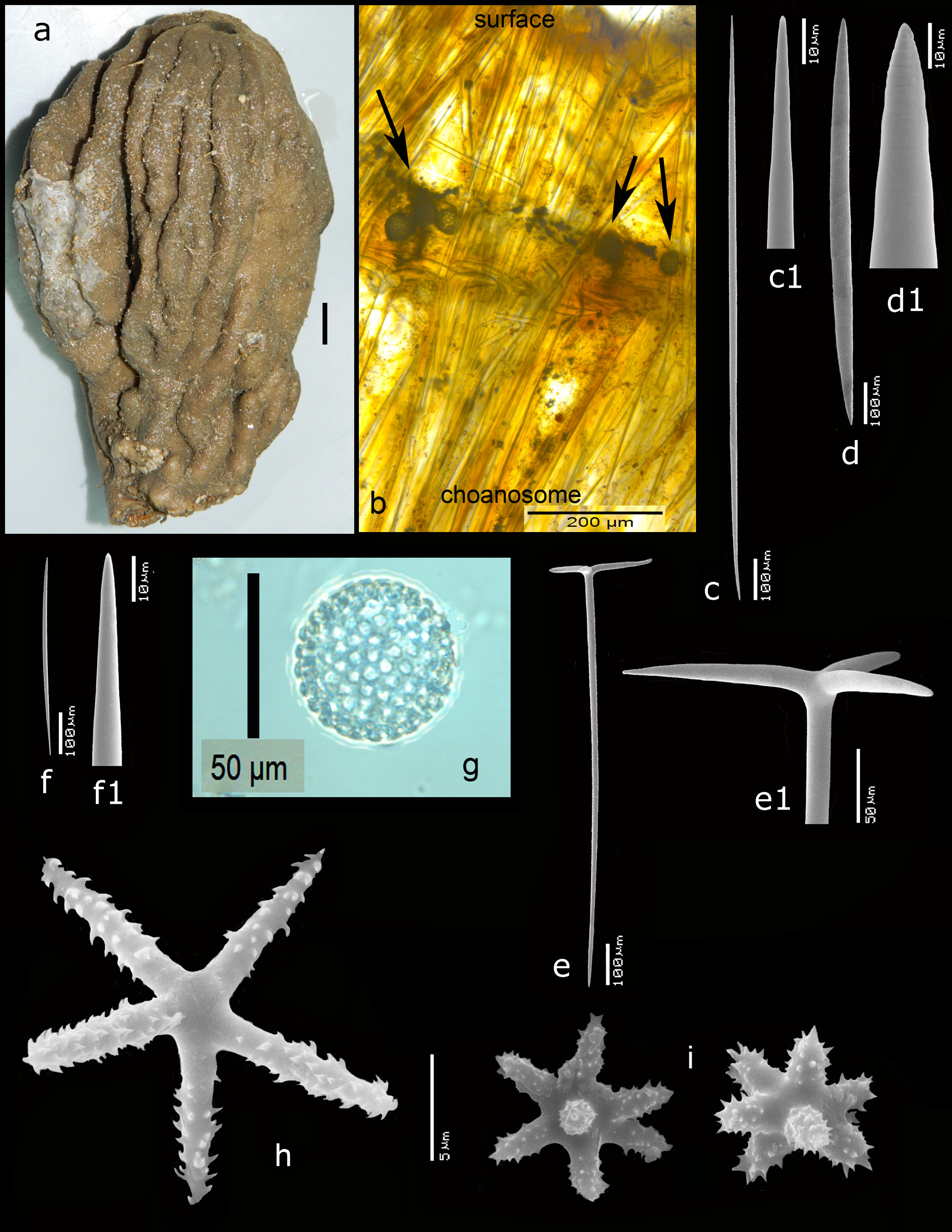