Description. Erect, flabellate sponges. The holotype ( Fig. 91View FIGURE 91 a) is a compound individual consisting of three partially anastomosed upright lobes, the paratype is a smaller compound of two such lobes. Size of holotype 18 x 15 cm, with a thicknes of about 1 cm. Surface is irregularly grooved and pitted, with many scattered oscules of about 3–4 mm diameter. Color red-brown (alcohol), if conspecific with Goméz’ specimens, then color in life was likely orange or red. Consistency firmly compressible.

Skeleton. Irregularly reticulate, with ascending knotted spongin fibers, 60–120 µm in diameter, and interconnecting fibers only slightly thinner, together forming polyangular or rectangular meshes of 500–1500 µm in diameter. Fibers cored by longer styles and echinated by shorter styles. At the surface, fibers end with scattered brushes or bouquets of styles and subtylostyles.

Cleistochelae ( Figs 91View FIGURE 91 e –f), with closed but not fused outer alae, which are provided with rounded knobs at the point of contact; shaft provided with a prominent indented central plate which varies in size but never fills the internal space; spicules are asymmetrical in the sense that the plate of the shaft is eccentrically placed and the alae are covering the shaft one sided, causing the occurrence of different left and right views; there appear to be two size classes which are slight different, (1) larger ( Figs 91View FIGURE 91 e), with relatively small plate, 33– 44.1 –48 µm, and (2) smaller ( Fig. 91View FIGURE 91 f), having the plate almost entirely filling the internal space, 18– 21.8 –28 µm.

Remarks. Gómez (2014) recently gave a description of specimens from the Campeche Bank and the coast of Yucatan, which appear closely similar to the present material. The habitus and skeleton (her fig. 11) and SEM plate (her fig. 12) are almost indistinguishable from the description and illustrations provided here. Gómez assigned these specimens to Clathria (Microciona) echinata ( Alcolado, 1984)  (as Axociella  ), but there appear several differences with this species. The foremost difference is the erect habitus, as C. (M.) echinata  is encrusting or at the most massive or semiglobular in shape, quite distinct from the shape of Gómez’ and the present specimens. The subgenus Microciona  is restricted to ‘persistently encrusting’ Clathria  species (Hooper 2002, p. 441), which does not agree with the habit of Gomez’ and the present specimens. No giant oxeote toxas are present in the above described specimens, whereas these are characteristic and dominant in Alcolado’s species. Gómez cites (but does not show in her SEM plate) broken oxeote toxas of 146–642 µm, which she assumed to be the giant toxas. Since Gómez’ material was obtained in different locations and depths, possibly both C. (M.) echinata  and the present species were represented in her material. Sizes for the normal toxas (shown in Gómez’ SEM plate) differ substantially from the above (8–13 µm vs. 30–60 µm, whereas Alcolado gives 40 µm for C. (M.) echinata  ). These small differences are here interpreted as evidence for specific distinction, but future studies might demonstrate that the differences are subject to variations of a single widespread polymorphic species. This polymorphic species would then also include the encrusting NE Brazilian species Clathria (Microciona) trairae Santos & Pinheiro, 2014  , which differs also in only minor details from C. (M.) echinata  . 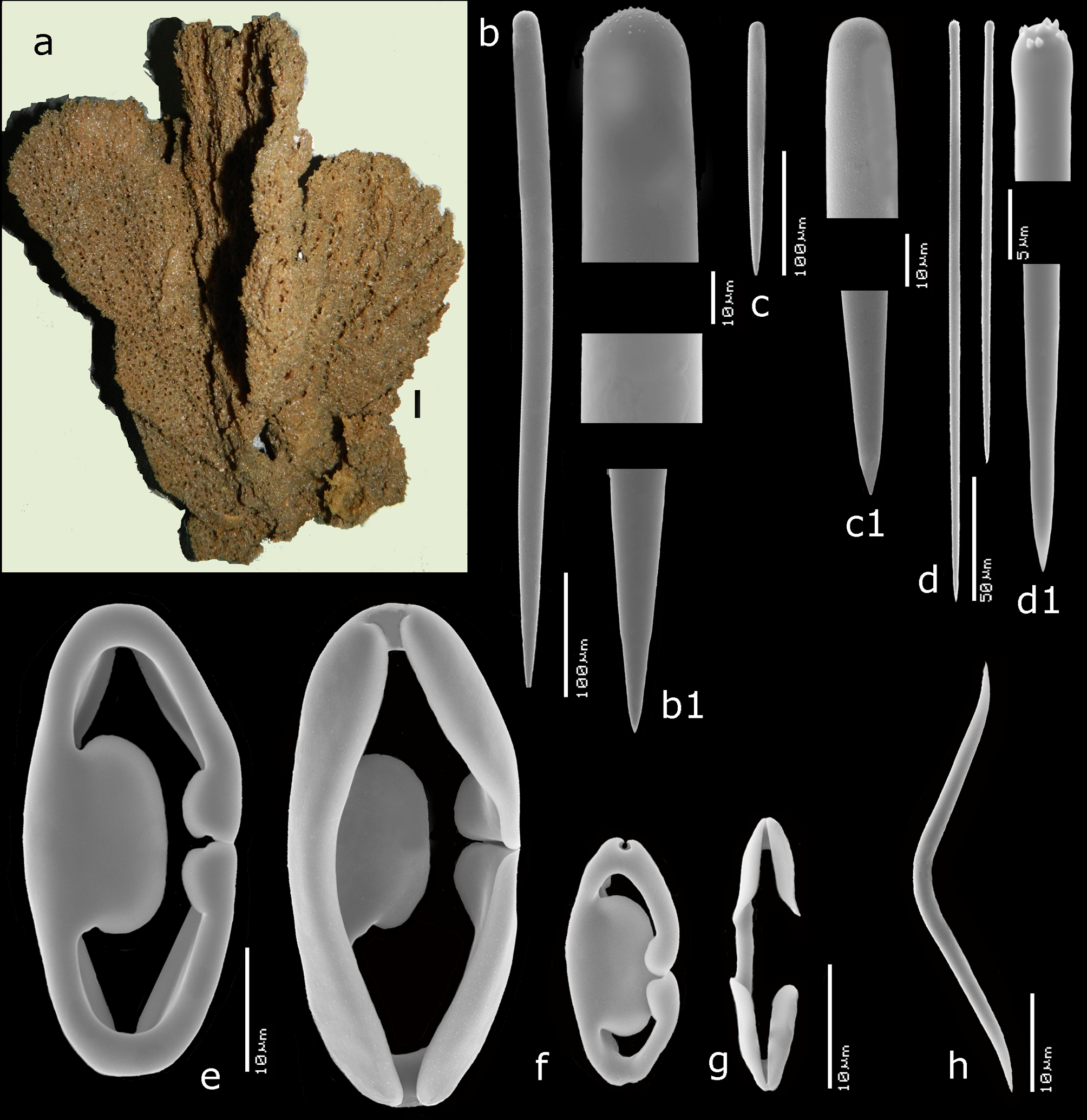