Note. Mello-Leitão did not provide a diagnosis for genus Austrohahnia . This genus is currently placed in Cybaeolinae ( Lehtinen 1967): “seems to belong here, but the original description is poor, and its relation to Cybaeolus (type genus of this subfamily) remains obscure”; here Austrohahnia is transferred to the subfamily Hahniinae from Cybaeolinae Lehtinen, 1967. We examined specimens of Cybaeolus pusillus Simon, 1884 (type species of the genus), and we could see substantial differences: 1) Austrohahnia have transverse spinnerets, while in Cybaeolus they are arranged in “normal” double longitudinal row; 2) the male palp of Cybaeolus has an embolus that originates basally, in males of Austrohahnia (so far unknown) it originates retro-apically; 3) palpal tibial process (= apophysis) in Cybaeolinae is distally branched, whereas Austrohahnia have two retrolateral tibial apophyses but end in an apical spine as in Hahniinae; 4) the pigmentation pattern of abdomen is reversed in Austrohahnia regarding Cybaeolus , and Cybaeolus are smaller; and 5) Cybaeolinae lack the patch of thick setae on ventral abdomen found diagnostic in Austrohahnia .

Diagnosis. Males and females of Austrohahnia can be easily distinguished from other American Hahniidae by the patch of thick, short setae ventrally on the abdomen, including immature specimens ( Figs 1 B, G View FIGURES 1 A – G ; 2 B, D, I). Males can be distinguished from Holarctic Hahniinae by having two retrolateral tibial apophyses (one of them homologous to the ventral tibial apophysis of other Hahniidae ), which originate retro-laterally at an identical position on the palpal tibia ( Figs 1 C–E View FIGURES 1 A – G , 2 E–G View FIGURES 2 A – I ). Females can be distinguished from Palaearctic Hahniinae by having long copulatory openings (as furrows) instead of small openings ( Figs 3 A, D, G View FIGURES 3 A – I ).

Male. Total length 2.40–4.40 (n = 8). Chelicerae as in female; three promarginal and three to four retromarginal teeth. Sternum slightly wider than long. Abdomen as in female ( Fig. 1 G View FIGURES 1 A – G ). Leg formula: 4123. Other characters as in female, except for the leg femora can be uniformly dark brown. Palp ( Figs 1 C–E View FIGURES 1 A – G , 2 E–G View FIGURES 2 A – I ): patella globose, with a strong patellar apophysis with apical tapering; tibia with two retrolateral tibial apophyses, one of them (most dorsal) strong and thick, similar shape to patellar apophysis, the other retrolateral tibial apophysis slender and strongly sclerotized, tip pointed, hook-shaped. Embolus originating retro-apically (at 1 o’clock), curved clockwise around the tegulum and ending near the membranous median apophysis. 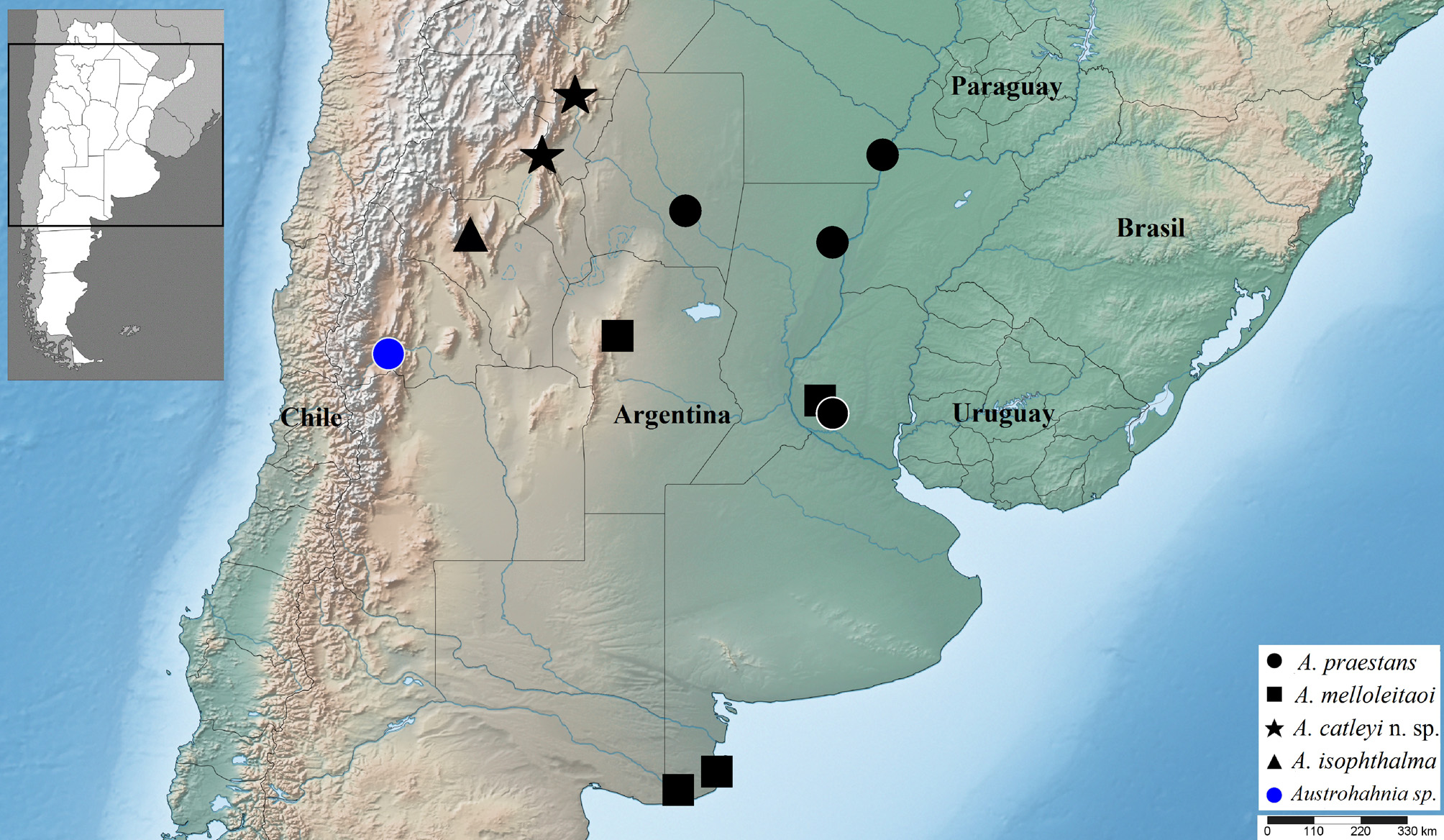 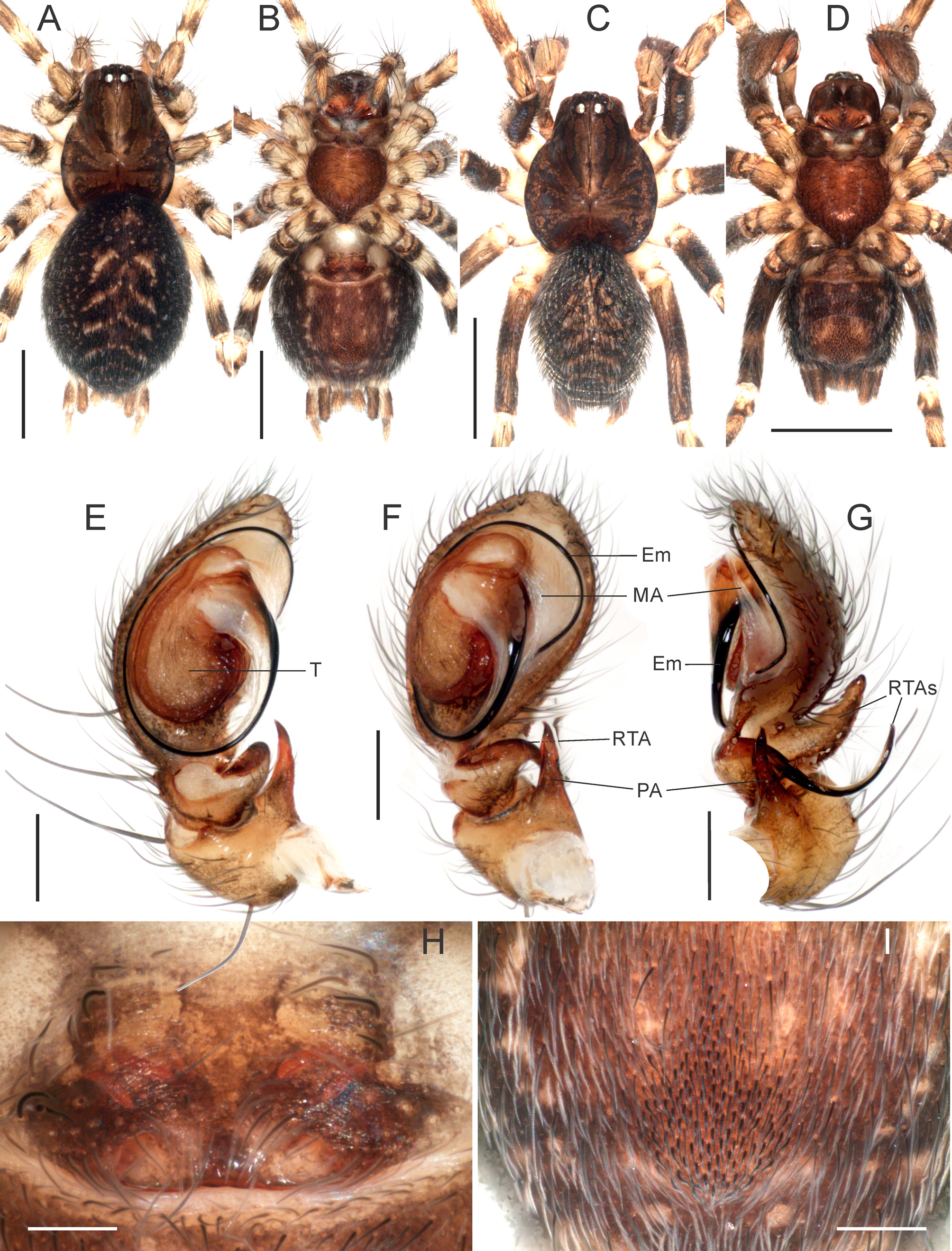 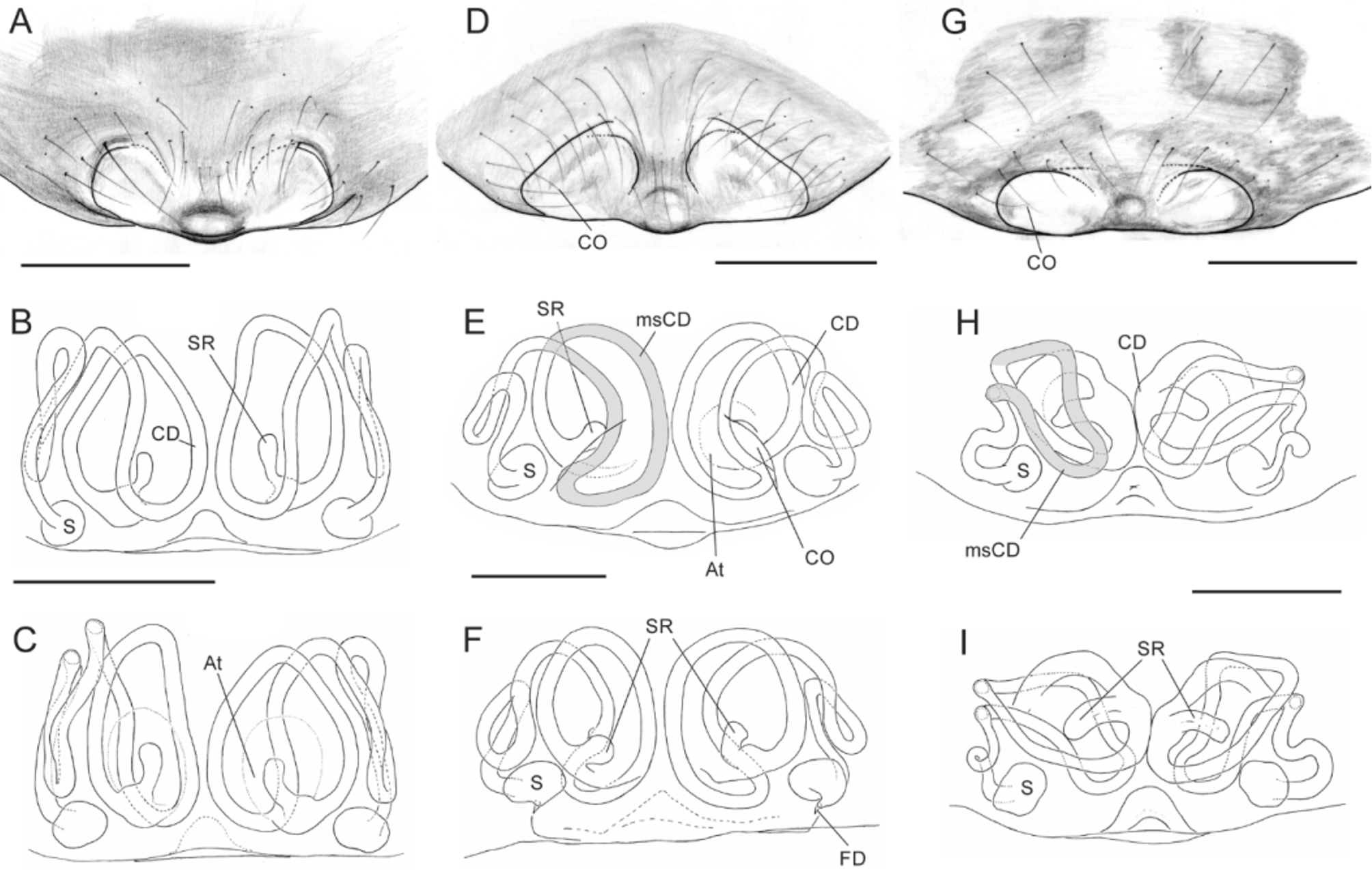