Galileo & Martins (2006) described Apyratuca  as follows (translated): “Body elongated, integument without setae. Antennal tubercles slightly elevated and distant from each other. Eyes not divided, coarsely granulated; lower eye lobes four times as long as genae. Upper eye lobes separated by distance equal to three ommatidia.Antennae 11-segmented, filiform, reaching elytral apex at apex of antennomere IX. Scape subcylindrical, longer than antennomere III. Antennomere III slightly shorter than IV. Prothorax wider than long; sides slightly rounded, without tubercle or spine. Pronotum convex. Prosternal process regularly curved. Mesoventrite without tubercle. Metasternum not shortened. Mesocoxal cavities open. Elytra with sides parallel up to distal third, then noticeably narrowed toward apex; elytral apex projected in long and single spine. Femora fusiform. Mesotibiae deeply sulcate at distal half.” Then, they provided the following remarks on the genus (translated): “ Apyratuca  gen. nov. is similar to Pseudepectasis Breuning, 1940  , but differs by the eyes not divided, with lower eye lobes very large (as long as four times genal length); by the antennomere III as long as IV, and by the elytra without tubercles and with the apex acuminate. In Pseudepectasis  , the eyes are divided, the lower eye lobes have length smaller than twice genal length, the antennomere III is distinctly shorter than IV, the elytra have tubercles, and the elytral apices are strongly oblique with outer spine. Also, by the description ( Breuning, 1971: 205), should be similar to Tucumaniella Breuning, 1943  , which we do not know. Apyratuca  gen. nov. differs by the antennae longer than body; by the scape short and cylindrical; by the antennomere III as long as IV; by the antennal tubercles not projected, and by the elytral apex acuminate. In Tucumaniella  , the antennae are 1.5 times longer than body, the scape is clavate and longer; the antennomere III is distinctly longer than IV, the antennal tubercles are very elevated, and the elytra are widely rounded at apex.”

All features pointed out as distinctive to Apyratuca  are present in the known species of Rosalba  . Even the acuminate elytral apex is similar to that of Rosalba incrustabilis Galileo & Martins, 2006  , a species described in the same work as Apyratuca  . The length of the genae and lower eye lobes, distance between upper eye lobes, and antennal length are highly variable in Rosalba  , again, not allowing separation between this genus and Apyratuca  .

Audureau (2016) described a second species in Apyratuca  and commented (translated): “This species [ A. bicolor  ] is next to Apyratuca apiculata Galileo & Martins, 2006  . It differs especially by the eyes that are contiguous instead of separated by the width of three ommatidia. The elytral apex is also different, straight in A. apiculata  , while it is curved laterally in A. bicolor  . In addition to its color, the elytral depression allows differentiation. Perhaps a new genus should have been described in order to place this new species. I prefer to keep A. bicolor  in the Apyratuca  as the two species of the genus were described from a single specimen.” We did not see any feature allowing separation of A. bicolor  from Apyratuca  and thus, from Rosalba  . 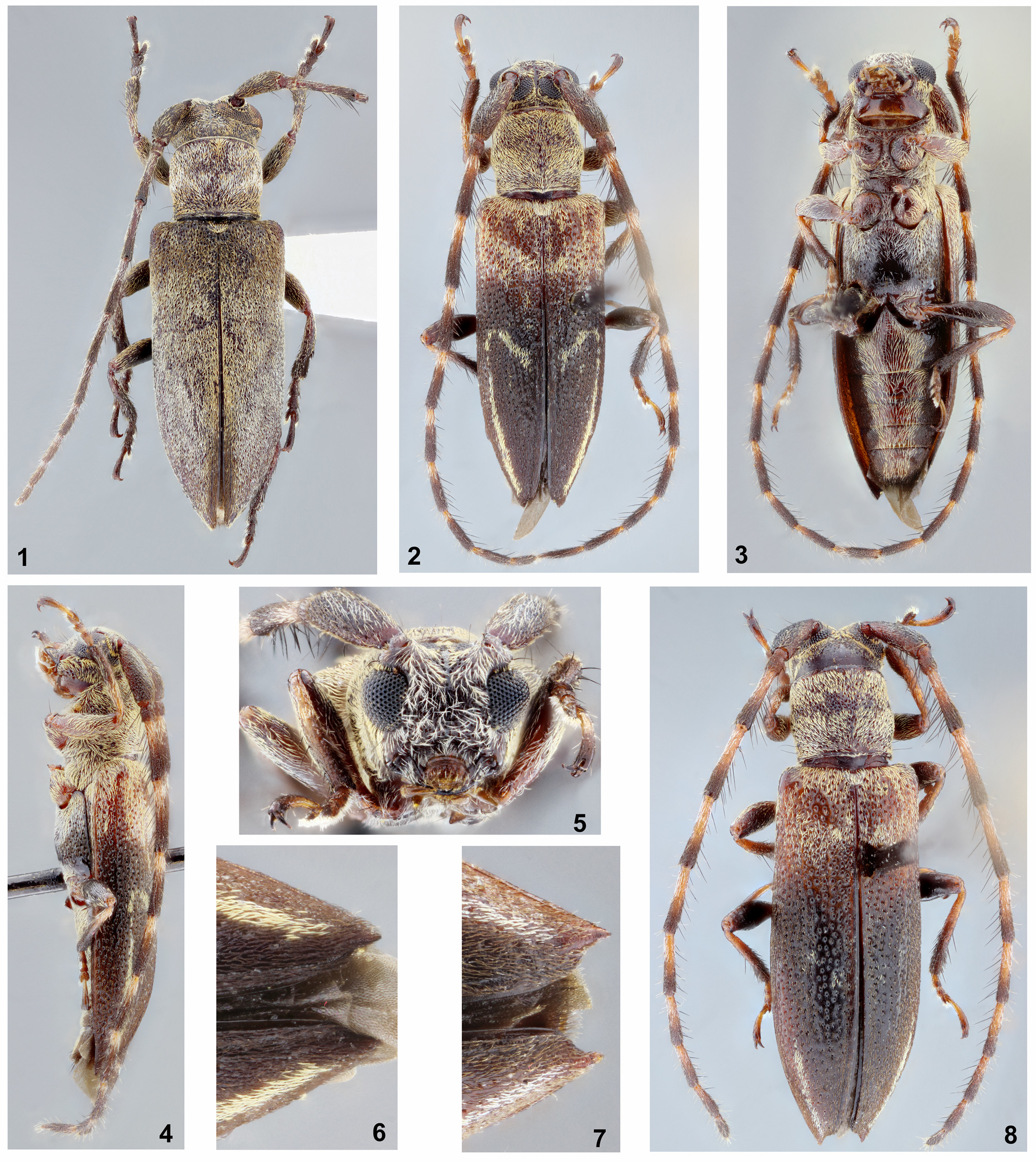