Hemiancistrus landoni   is recognized among all species of Hemiancistrus   sensu lato, except for H. medians   by its abdomen, which is completely covered by small bony plates, and has a peculiar color pattern, rounded dark spots (vs. abdomen naked with light spots or plain). According to the figures and redescription indicated by Fisch- Muller et al. (2012), H. landoni   can be recognized from H. medians   , by its dorsal fin when folded does not reach the origin of the adipose fin versus the dorsal fin folded reaches the origin of the adipose fin. Further recognized by its head shape, which is less deep, and by its supraoccipital without a keel. In H. medians   , the head is massive, and the supraoccipital has a keel. The eye is smaller in H. landoni   than in H. medians   , 15%–16% HL versus 18%–27% HL, respectively. Finally, the number of cheek odontodes is smaller in H. landoni   than in H. medians   , 10–20 vs. 20–60. Some large specimens show highly developed, long and pointed odontodes, on distal and dorsal portion of pectoral spines. This condition, as in other cases, may occur in sexually active adult males. Hemiancistrus landoni   is an endemic species of the Pacific slope of Ecuador, and is found exclusively in aquatic systems of the Guayas River Basin and other water courses related to this basin.

The observed changes on the sphenotic occur on the posterior surface. Two conditions are perceived; in the first condition, the posterior region has an excavation or canal, extending from the middle of the bone to the ventral region of the bone; the area from the middle of the bone towards the dorsal region is massive ( Fig. 6 View FIGURE 6 A). The second condition is an excavation or canal that runs along the entire posterior surface, from the dorsal to the ventral. This channel is open in the ventral region, but towards the dorsal border it may be totally or partially open ( Fig. 6 View FIGURE 6 B). In H. annectens   the first condition is observed, while in H. landoni   and in H. furtivus   , the second condition is observed, the canal is almost occluded at the dorsal border.

On the ventral and anterior border of the pterotic there is a fossa and a process (anterior process of the pteroticsupracleitrum according to Armbruster 2004). Again, two conditions related to this region are observed. In the first condition, the fossa and the process are slightly developed ( Fig. 7 View FIGURE 7 A). In the second, there is an appreciable development of the fossa and the process ( Fig. 7 View FIGURE 7 B). In H. annectens   , the first condition is observed, while in H. landoni   and in H. furtivus   , the second condition is observed.

On the analyzed species, the opercular bone presents two different forms ( Fig. 8 View FIGURE 8 ). In the first condition, the general shape or contour of the bone is almost triangular, similar to that described by Schaefer (1987) for Hypostomus plecostomus   and Cochlidon cochliodon   and Armbruster (2004) for Hemiancistrus maracaiboensis   and Hypostomus taphorni   (condition 0). In the second condition, the opercular has the contour of the opercular in the form of a paddle with a posterior dorsal projection, similar to that described by Schaefer (1987) for Peckoltia niveata   and by Armbruster (2004) for Peckoltia   sp. (Condition 1, Type- Peckoltia   ). The first condition of the opercular is present in H. annectens   ( Fig. 8 View FIGURE 8 A), while the second condition is observed in H. landoni   and H. furtivus   ( Fig. 8 View FIGURE 8 B). The changes in opercular shape can be related to the increase in its rotational capacity at the point of support (condyle of articulation with the hyomandibular) and its properties as a lever. The conditions or states observed could be used to include the species under study into the Hypostomini or Ancistrini   sensu Armbruster (2004).

The changes noted in the three bones are linked to increased development (increased diameter or muscle thickness) and increased surfaces of origin and insertion of the levator operculi and dilator operculi muscles, which was evidenced during the preparation of skeletons.

Discussion. The status of the genus Hemiancistrus   is still controversial. The loss of the holotype of H. medians   , and the way Kner (1854) presented the original description, generated doubts and discrepancies about the correct identity of this species. Fisch-Muller et al. (2012) established the taxonomic status and the identity of the type species, in spite of the descriptions provided by Günther (1864) and Regan (1904). We do not have specimens of H. medians   , however, as indicated by Fisch-Muller et al. (2012) and Armbruster et al. (2015), H. medians   and H. landoni   share some external morphological characteristics not observed in the other species included in Hemiancistrus   sensu lato, such as the presence of keels in the lateral plates of the body and a similar coloration pattern. The way the abdomen is covered appears to have some difference between H. medians   and H. landoni   , but none of the other species included in the group has such an extended abdominal covering. According with Armbruster et al. (2015) only H. medians   is included in the genus Hemiancistrus   . Therefore, the generic status of H. landoni   and the other species remains uncertain.

Hemiancistrus furtivus   is represented at the MEPN by seven specimens in five cataloged lots. Only four are in good conditions, and/or with an appreciable standard length. Comparisons with original descriptions of the geographically nearest species were made carefully, and the external characters observed on H. furtivus   shows that it is a new species. The belly is totally naked, the dorsal and caudal fins have a distinctive color pattern, and the small movable cheek odontodes differ from that of other Pacific Coast species described or placed in Hemiancistrus   . In spite of this, the body color pattern observed on our specimens is very close with that reported by Eigenmann (1916) in the original description of H. landoni   . He pointed out that the body has four oblique transverse saddles, the first behind the eyes, the second at the end of the dorsal fin, the third at the level of adipose fin, and the fourth at the caudal-fin origin. On our specimens of H. landoni   , the presence of saddles is variable in that some are very evident while in others they are very faint or no traces are observed ( Fig. 2 View FIGURE 2 ). Two more species, were originally described from the Pacific versant of Ecuador, H. hammarlundi Rendahl 1937   , and H. fugleri Ovchynnyk 1971   . We agree with they are synonymous with H. landoni   and H. annectens   , respectively. The original description of H. hammarlundi   was made on a unique specimen of 70.4 mm SL (Armbruster per. comm.). This specimen has small patches of granular plates on belly, and 20 movable odontodes developed in the cheek area. This is clearly different to that observed in H. furtivus   . On the other hand, Ovchynnyk (1971) in the original description of H. fugleri   , points out that the folded dorsal fin reaches or is very close to adipose-fin origin, and that the belly has small patches of granular plates. The specimen used was 91 mm SL. Only the examined juveniles of H. annectens   show that the folded dorsal fin reaches the adipose-fin origin, and they also have small patches of granular plates on belly. The first character is useful to distinguish juveniles from H. landoni   and H. furtivus   , but the character changes with size; in large specimens of the three species, the folded dorsal fin does not reach the adipose-fin origin. Also, the figures provided by Ovchynnyk (1971) show a color pattern of the body and fins similar to H. annectens   , and different to that observed in H. furtivus   . Additionally, there are no developed cheek odontodes in H. fugleri   . These results support the synonymy proposed by Armbruster et al. (2015) between the species previously described from Ecuador, and confirms the presence of the new species. The completely naked abdomen, the dark rounded dots on it, and the small movable cheek odontodes distinguish H. furtivus   from all other species included in Hemiancistrus   sensu lato (Armbruster et al. 2015). Finally, Armbruster et al. (2015) established at least three groups within Hemiancistrus   sensu lato. The groupings are based on morphological similarity of species. The species H. landoni   and H. furtivus   are similar in overall body shape and the color pattern, but the cover of the abdomen and the degree development of mobile cheek odontodes are different. Despite these facts both species are included in the H. landoni   group.

Hemiancistrus annectens   , H. aspidolepis   , H. maracaiboensis   , H. holostictus   and H. wilsoni   , inhabit the trans- Andean region, Panamá, Maracaibo lake basin, the rivers Magdalena, Cauca, Atrato, San Juan (Colombia), and Santiago (Ecuador). When comparing the original descriptions of all species, and specimens of H. annectens   , it is evident that the external morphology, the meristic and morphometric data, and the color pattern are similar. This fact was previously detected by Schultz (1944), and mentioned by Regan (1913) and Eigenmann (1918). Some morphometric differences can be related with the size, the fixation and preservations conditions of the type specimens. At this moment, we do not have specimens of the other species on hand, and we are unable to offer diagnostics characters to recognize each species. A study to establish the status of each species is necessary, using direct comparison of fresh and well preserved specimens from each basin. In the meantime, the use of the names proposed to each basin is suggested. Recently, Armbruster et al. (2015) reassign to the genus Hypostomus   the five species, as a consequence of the results obtained on phylogenetic analyses. The external morphology of the five trans-Andean species of Hypostomus   seems to indicate that they do not belong in the genus Hemiancistrus   or even to the Ancistrini   group, as pointed in morphological and molecular phylogenies ( Armbruster 2004, 2008; Lujan et al 2015).

The comparative analysis of the bones related to the movement of the opercular, support the placement of H. annectens   in the Hypostomini and H. landoni   and H. furtivus   in the Ancistrini   . In order to establish the proper generic allocation of H. annectens   a project is being carried out which includes a comparative analysis of the indicated bones, between this species and species traditionally included in the genus Hypostomus   . In an analogous way, it is hoped to be able to compare osteologically the species included in the genus Hemiancistrus   sensu lato to indicate its appropriate taxonomic status. 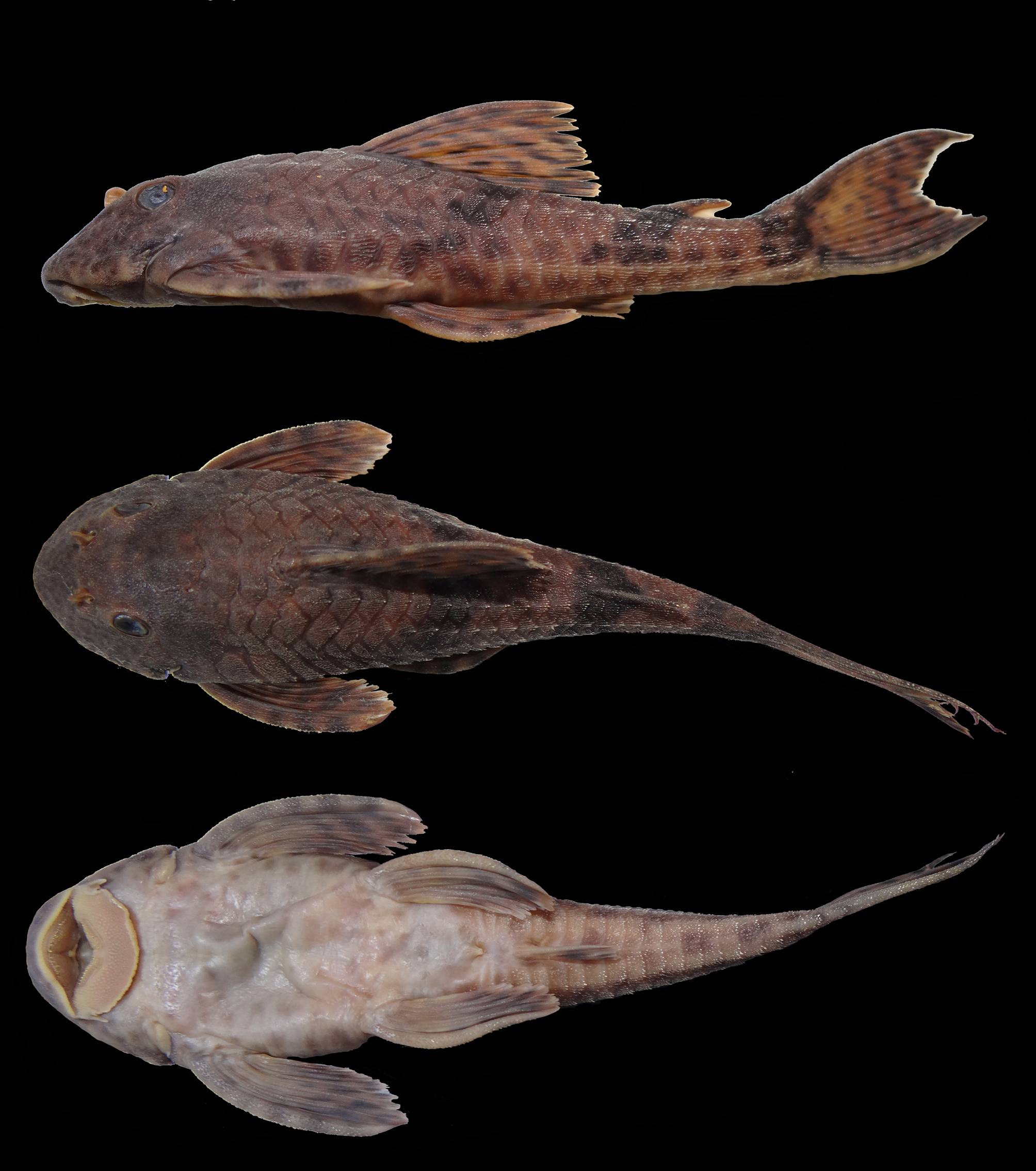 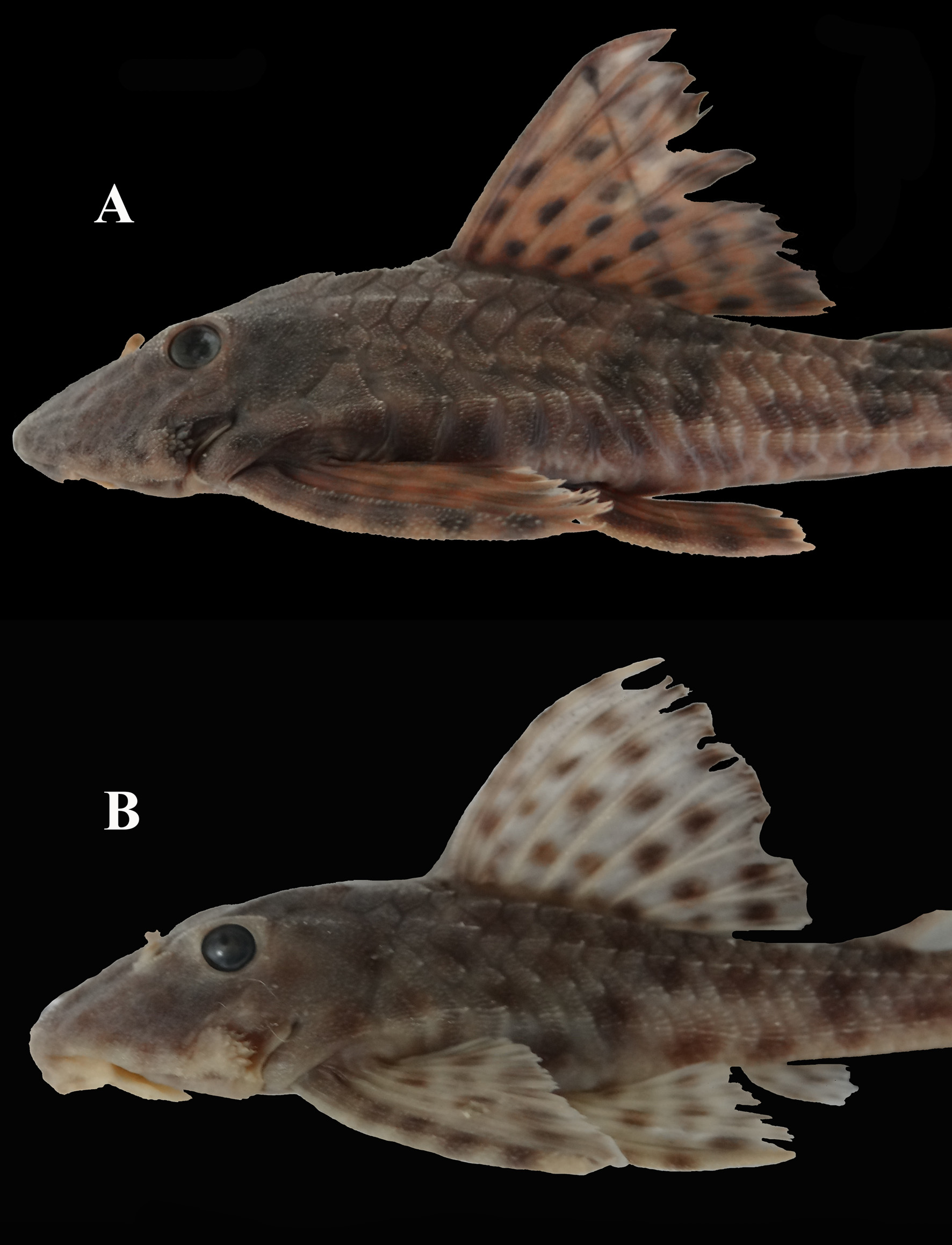 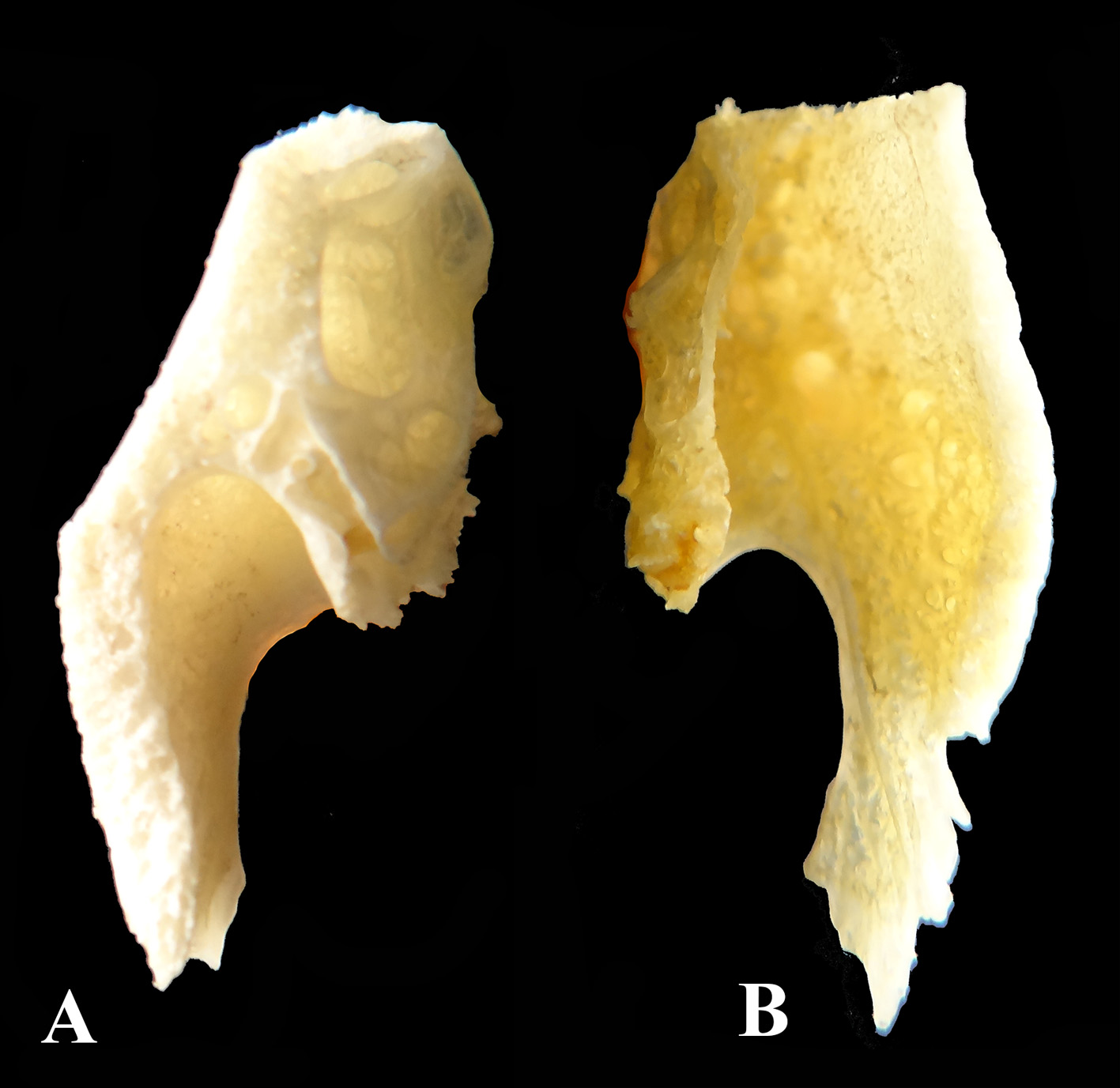 FIGURE 6. Posterior view of sphenotic. A) Hypostomus annectens, specimen of 190.0 mm SL, left, and B) Hemiancistrus landoni, specimen of about 210.0 mm SL, without data, right.

FIGURE 7. Frontal view of right pterotic. A) Hypostomus annectens, specimen of 190.0 mm SL, and B) Hemiancistrus landoni, specimen of about 210.0 mm SL, without data. FIGURE 8. External lateral view of right opercular. A) Hypostomus annectens, specimen of 190.0 mm SL, and B) Hemiancistrus landoni, specimen of about 210.0 mm SL, without data.