Pupa description ( Figs 23–27View FIGURES 23 – 27). Length: male 6.1–7.8; female 5.3–9.1 mm. Adecticous and exarate. Coloration whitish-cream, with long stiff setae on pronotum, smaller setae on rostrum and very small setae placed on spiniform processes on dorsal side of abdomen. Head completely covered by pronotum in dorsal view; each side with one vertical setae (vs), one supraorbital setae (sos) and two minute orbital setae (os) located near eye margin; apex of rostrum in females reaching base of abdominal segment V, in males surpassing base of abdominal segment III; rostrum with a pair of short postantennal setae (pas) and two pairs of short rostral setae (rs 1-2). Pronotum transverse, conical, with one pair of suprapical setae (sas) and a pair of discal setae (ds) located on prominent spiniform processes, and with three lateral setae (ls 1-3) and four posterolateral setae (pls 1-4) on each side. Mesothorax (ThII) with three erect fine tergal setae on each side, located at base of a spiniform process; scutellum rounded. Metathorax longitudinally sulcated and divided into two distinct halfs, each one with three pairs of posterior tergal setae located on small spiniform processes and two minute spines inserted between the setae. Abdomen: segments I-VIII with four pairs of tergal setae located on small spiniform processes and three minute spines inserted between setae, forming one transverse row near posterior margin; III and IV slightly wider than others; VIII transverse with anterior margin rounded; IX with pseudocerci (pc) very acute, each one with one pair of small setae. Gonothaeca splitted in two in females ( Fig. 26View FIGURES 23 – 27), not divided in males ( Fig. 27View FIGURES 23 – 27). Seven annular spiracles placed at lateral sides of segments I to VII, well visible only on lateral view.

The habitus of the pupa of L. pustulatus  is very similar to that of L. fusiformis  , described by Burke (1968), the only other species of the genus for which a pupal description is available. The observed differences are concerned with chaetotaxy. The pupae of the two species can be distinguished by the presence, in L. fusiformis  , of two anteromedian setae located anteriad to the transversal rows of the tergal setae in the meso-, methatorax and abdomen, whilst the two anteromedian setae are absent in L. pustulatus  ( Fig. 23View FIGURES 23 – 27). The sexual dimorphism is similar in pupae of both species, the gonothecae IX is splitted in two in the female ( Fig. 26View FIGURES 23 – 27) but not divided in the male ( Fig. 27View FIGURES 23 – 27).

Host plant. Ceiba speciosa  (A. St.-Hil.) Ravenna ( Malvaceae  ) ( Fig. 41View FIGURES 38 – 41. 38 — 40). According to Lorenzi (2000), the "paineira" reaches 30 m in height; the trunk is bottle-shaped and can attain 120 cm in girth. The leaves are palmate and deciduous. The flowers are large and colorful ( Fig. 28View FIGURES 28 – 33. 28). Its blooming time is from mid-December to May. The large fruits are dehiscent, mature from August to September, and in this period the tree is completely devoid of leaves. The natural range is central (Goiás and Mato Grosso do Sul) and southeast Brazil (Minas Gerais, Rio de Janeiro, São Paulo and north of Paraná). As it is a startling tree, resistant to drought and moderate cold, it has been introduced in other Brazilian states and even other countries as an ornamental plant used for landscaping.

Biological notes on natural history. We observed the complete development of L. pustulatus  inside the flowers of C. speciosa  (A. St.-Hil.) Ravenna collected in the city of São Paulo. Oviposition occured in the "paineira" during the flowering period, between mid-December to May. In the same tree branch flowers were found in different stages of development, an event already reported by Donato (1991). Female weevils did not select a specific flower stage in which to oviposit, since weevil larvae of first instar were found in buds and open flowers as well. With the help of the rostrum, females drilled a hole into the apical region of the staminodium of buds of nonaborted flowers ( Fig. 29View FIGURES 28 – 33. 28). Only one channel was drilled and a single egg was oviposited in each flower ( Fig. 30View FIGURES 28 – 33. 28). As soon as the egg hatched, the first instar larva began feeding and burrowed a gallery through the staminodeum tissues in the direction of the central cavity ( Fig. 31View FIGURES 28 – 33. 28). This movement was accomplished in two days. When the first instar larva reached the central cavity it moulted to the second instar larva.

The second instar larva moved in circular paths and enlarged the feeding area on the upper inner walls of the central cavity, for about three days. The bodies of the first and second instar larvae were covered by a sticky, mucilaginous substance. According to Donato (1991), the inner layer of epidermis that delimits the central cavity walls has groups of mucilaginous ducts. We observed that, as the larva burrows, the ducts are cut off and the mucilage is released. Part of the mucilage is eventually ingested during larval feeding, part remains free in the cavity and part gets stuck on the larval integument.

In the third instar, the larva also began to feed on the style tissues, rendering the flowers sterile. Next, the third instar larva, always feeding and moving in circular paths, went downward in the direction of the ovary ( Fig. 32View FIGURES 28 – 33. 28). By the middle of the third instar, the ovary tissues, as well as the surrounding tissues near the base of petals, were completely eaten. The third instar lasted about seven days. After the larva stopped eating ( Fig. 34View FIGURES 34 – 37), it took three and half days to construct the pupal chamber, which was covered with remains of the attacked tissues ( Fig. 33View FIGURES 28 – 33. 28). The pre-pupa remained one and a half day in the pupal chamber before moulting to the pupa stage.

The pupal phase ( Figs 33View FIGURES 28 – 33. 28 and 35View FIGURES 34 – 37) lasted about six days. When disturbed, pupae rotated their abdominal segments in a circular motion. As soon as the teneral adults emerged ( Fig. 36View FIGURES 34 – 37), they remained inside the pupal chamber for about two to four days. The length of this period may reach six days at lower temperatures.

Reared adults, mantained in laboratory, had been fed with petals of the "paineira" flowers and a complement of honey and water. In November, young leaves of sprouts of the host plant were offered to the adult weevils. After a day, the leaves had tiny circular holes. Very similar holes were observed in the field, in the leaves of the host plant where the adult weevils were collected. Whenever young and older leaves were offered at the same time, the adults of L. pustulatus  showed a distinct fondness for the young leaves. Adults ( Fig. 37View FIGURES 34 – 37) remained alive for up to nine months, from mid-May to mid-February, under uncontrolled laboratory conditions. The period of weevil death coincides with the beginning of the new blooming season. The entire cycle, from egg to adult, lasted 18 to 20 days. The larvae and adults were more active at night. As soon as it began to darken, adult weevils started moving.

One larva of L. pustulatus  was parasitised by the wasp Catolaccus  sp. ( Hymenoptera  , Pteromalidae  ) ( Figs. 38–40View FIGURES 38 – 41. 38 — 40). Duration of the wasp pupal phase was eight days. Wasps of the same genus were reported as ectoparasitoids of other Anthonomini  , as for instance Catolaccus grandis Burks, 1954  , as a parasitoid of the cotton weevil, Anthonomus grandis  , in Campina Grande, State of Paraíba, Brasil (Araújo & Azevedo, 1997).

Fernández et al. (2008) determined the frequency of larvae of two species of Loncophorus  on aborted and nonaborted flower buds ( L. fusiformis  ) and developing fruits ( L. santarosae  ) of C. pentandra  (L.) Gaertn, in southeastern Costa Rica. The authors demonstrated that the incidence of flower buds with weevil larvae was lower in those attached to trees than in the aborted flowers that had fallen to the ground. They reported one similar and one higher frequency of flower buds infested by larvae than we did: 30.1 % in 2003 and 40.4 %. in 2005, while we obtained incidences of 32.5 % in 2010 and 34 % in 2011. We have not observed the larvae of L. pustulatus  attacking developing fruits of C. speciosa  (A. St.-Hil.) Ravenna, in São Paulo.

The flowers of C. speciosa  (A. St.-Hil.) Ravenna provides a shelter to all life phases of L. pustulatus  : eggs, larvae, pupae and adults. As the larvae feeds on the reproductive structures, the flowers have their growth reduced and the ovaries do not produce fruits. Aborted flowers with weevil larvae inside show evident damage in shortened styles and darkened anthers. In all observations, larvae pupate inside the flower, although an earthy substrate was available as a pupation site. 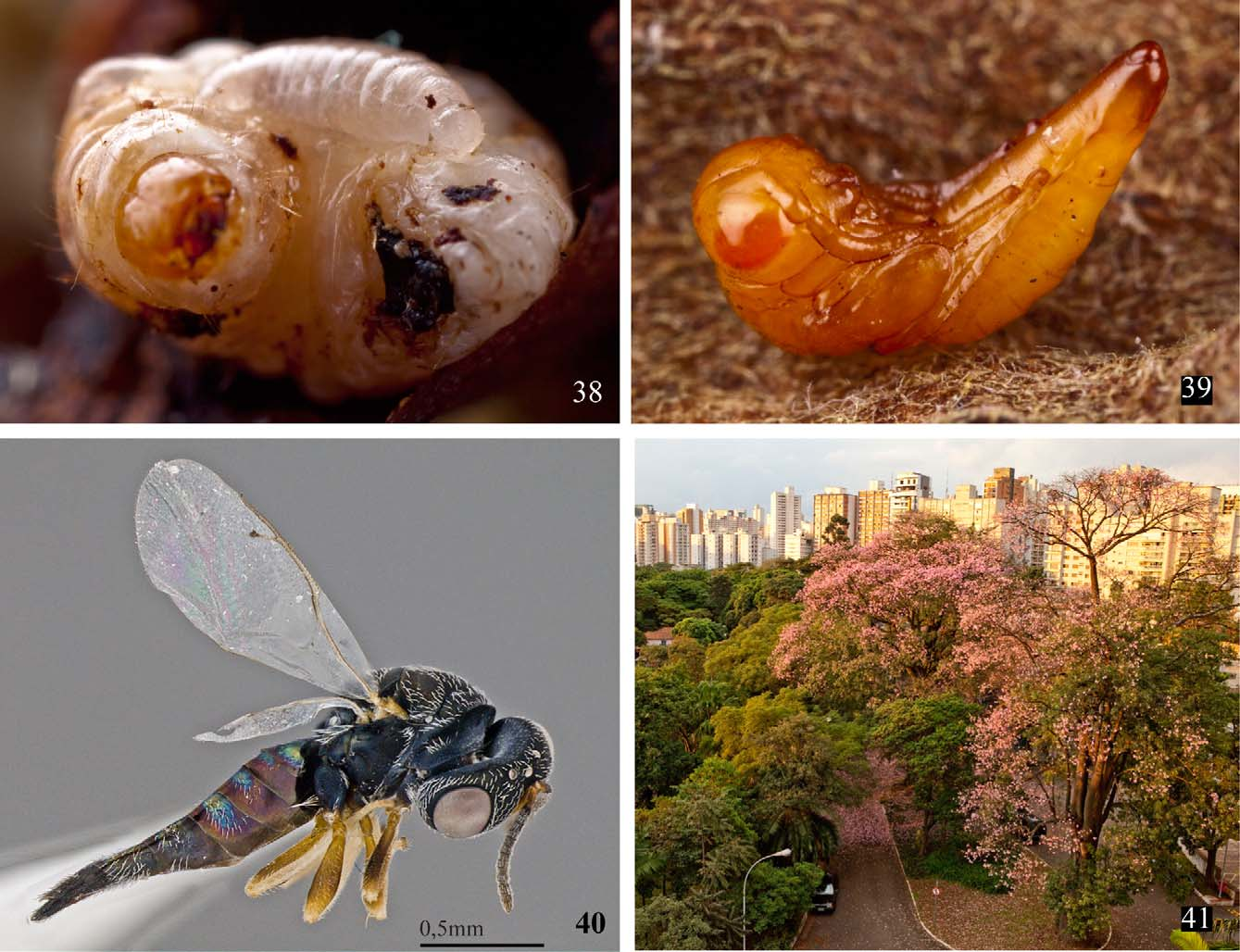