Diagnosis. Based on male tegmen. Area between C and anterior margin narrow; 4 branches of Sc ending in stem C; both RA and RS pectinate with 5 branches; anterior branch of MP+CuA 1 pectinate, with 4 terminal branches; “handle vein” ending in posterior branch of MP+CuA 1; Stridulatory vein (part of CuP) strong, meeting 1 A at about midlength of 1 A, CuP and 1 A fused for a short distance, and then disjoined. Crossveins scattered between branches of RS, MA and MP+CuA 1; a spot of pentagon cells distributed in distal part of branches of RS, MA and anterior branches of MP+CuA 1. Pigmentation present on most of the tegmen, and forming distinct transverse bands.

Description. Isolated right tegmen, oblong. Preserved length of part and counterpart respectively 35.3 mm and 35.6 mm (total length probably 41 mm), maximal width 17.9 mm, ratio of length to maximal width 2.3. Area between C and anterior margin narrow. C arced, ending in anterior tegmen opposite the origin of MA 2. Sc long, reaching anterior margin at about basal 2 / 3 tegminal length, and giving off 13 distinct and strongly oblique branches, of which 4 end in stem C; crossveins between branches of Sc straight, less reticulated, and regularly spaced. R strongly marked and oblique upwards; area between Sc and R narrow. RA and RS diverging at about 1 / 3 basal tegminal length; RA pectinately 5 -branched, with first and fourth branches secondarily bifurcated distally; RS pectinate apically with 5 simple branches; first branch of RA originating at about tegminal midlength, and much basal of origin of first branch of RS; RS originating at 12 mm distal of tegminal base with main branch gently curved until its terminal; area between RA and RS broadened for its basal half, and progressively narrowing for its distal half; crossveins between RA and RS almost straight and simple, and regularly spaced. Stem M about 10 mm long, marked and oblique downwards; MA and MP diverging at about basal 1 / 4 tegminal length; stem MA moderately long (3.1 mm) and forking into MA 1 and MA 2 at 13.1 mm distal of tegminal base; both MA 1 and MA 2 very long, simple, and slightly arched; stem MP slightly longer (4.0 mm) than stem MA, and fused with CuA 1 opposite origin of MA 2. Area between R and MA strongly broadened for its basal quarter (max. width 2.8 mm), and progressively narrowing for its distal 3 / 4 length, occupied with almost straight and regularly placed crossveins. Stem MP nearly straight; CuA 1 diverging from CuA about 7.3 mm distal of tegminal base; MP connected with CuA 1 5.5 mm distal of origin of CuA 2; MP+CuA 1 forked opposite connection of MP with CuA 1, with anterior branch pectinately 4 -subbranched, and posterior branch simple; “handle vein” almost straight, 4.5 mm long, ending in posterior branch of MP+CuA 1; no distinguishable crossveins between CuA 1 and “handle vein”; crossveins between anterior and posterior branches of MP+CuA 1 sigmoidal and regularly apaced, posterior branch of MP+CuA 1 and CuA 2; crossveins between CuA 2 and CuP almost straight at base quarter and sigmoidal distally. Stridulatory vein strong, sharply curved, connected with 1 A midway; CuP and 1 A fused for a short distance, and then disjoined. 3 anal veins distinguishable with 1 A arched. Pigmentation present on most of the tegmen, consisting of 6 distinct transverse color bands with fourth forked.

Discussion. The new species can be differentiated from all other species of the genus based upon male tegmina in CuP and 1 A fused for a short distance, “handle vein” ending in posterior branch of MP+CuA 1 and no crossveins between CuA 1 and “handle vein”. Furthermore, it differs from Aboilus fasciatus  in pentagon cells much fewer in distal part of branches of RS, MA and anterior branches of MP+CuA 1, and anterior branch of MP+CuA 1 posteriorly pectinate with 4 simple subbranches; from A. columnatus  in first branch of RA secondarily forked, RS pectinately 5 -subbranched, Stridulatory vein meeting with 1 A at about midlength of 1 A, and CuP fused with 1 A for a short distance.

Up to now, 6 species from China were placed in Aboilus  but all based on female tegmina except for the new species (see Table 1). A. jiyuanensis  , A. cornutus  and A. stratosus  share a number of characters and they are clearly distinguishable from A. lamina  and A. tuzigouensis  .

Aboilus lamina  was originally described as Parahagla lamina Lin, 1982  . In view of Parahagla Lin, 1982  preoccupied by Parahagla Sharov, 1968  , the generic name was replaced with Linhagla  by Mayer (2004). Later, the species was transferred to Aboilus  by Lin and Huang (2006). A. lamina  is quite different from other congeners and exhibits certain primitive characters of Aboilinae  , even of Prophalangopsidae  : crossveins between branches of Sc contribute to networks, crossveins between main longitudinal veins are serried, and the area between MP+CuA 1 and CuA 2 is comparatively broad. On the other hand, this species possesses a very huge tegmen (104 mm in length). The arched C and basal branches of Sc ending in stem C indicate that this species can be attributed to Aboilinae  and is probably related to Tettaboilus Gorochov 1988  . Lack of male material, however, makes it difficult to determine the actual systematic position of the species for the present.

A. tuzigouensis Lin and Huang, 2006  is also a huge species with the tegmen probably 110 mm in length. Some characters observed in the tegmen, however, have not been found in other species of Aboilinae  : stem C parallel to the nearest branches of Sc, CuA 2 and CuP extraordinarily long (CuA 2 ending in the posterior margin beyond the bifurcation of RS), and tegmen much narrower basally than apically (about 1 / 2 for the ratio). So this species is also questionable to be included in Aboilinae  .

The tegminal pigmentation of A. chinensis  sp. nov. shows regular and colored bands and is easily observed. This type of coloration pattern is familiar in the Mesozoic species of Prophalangopsidae  , but has not yet been found in the Cenozoic or extant prophalangopsids. 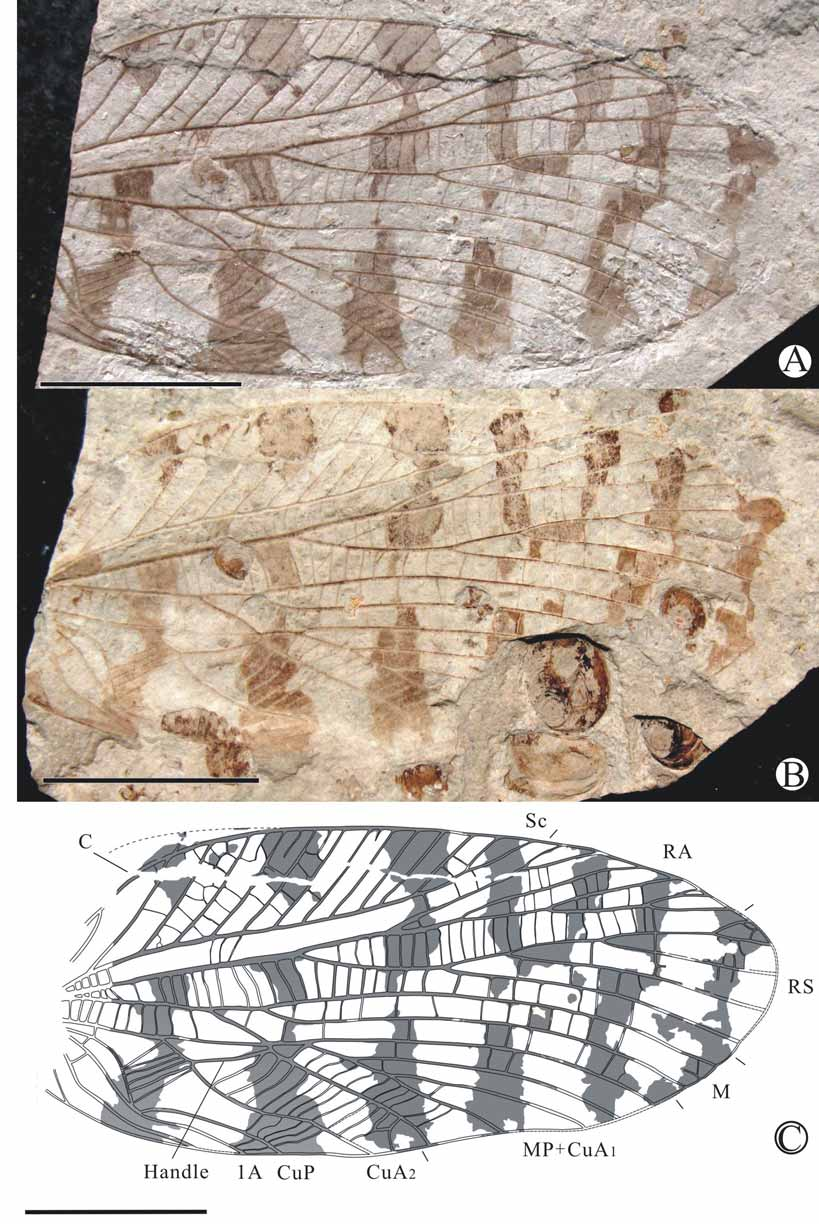