Diagnosis. Anterolateral spine of carapace extending beyond base of cornea; protogastric lobes absent; extraorbital sinus narrow, V-shaped; rostrum triangular, carinate along its entire length, strongly deflected, proximal outer margin of moveable finger of cheliped without lobe; fingers of cheliped without lobular tooth; palmar crest of cheliped absent; anterior angle of ventral margin of epimera 2 unarmed; inner margin of ventral face of ischium of cheliped with one distal spine and a small proximal tubercle; dorsal margin of carpus of second and third pereiopods with one distal spine followed by scale-shaped tubercles.

Dorsal margin of dactylus, propodus, and carpus of 2 nd, 3 rd, and 4 th pereiopods with longitudinal rows of scales. Carpus of 2 nd and 3 rd pereiopods armed anterodorsally with one scale-shaped tubercle.

Variations. The three female paratypes have more prominent spines. On the proximal outer margin of the moveable finger there are several scales, suggesting the presence of a lobe. The anterior margin of the propodus of the paratypes has a strong spine followed by several tubercles ornamenting the region of the palmar crest, without, however, constituting a palm.

Discussion. The new species, Aegla saltensis  , is quite close to Aegla jujuyana Schmitt  , sharing the absence of a proximodorsal lobe on the moveable finger and a lobular tooth on the cutting edge of cheliped, thus with palmar crest absent. It is distinguished from A. jujuyana  by the more globose hand; by the definition of the pre-dactylar lobe of the cheliped, by the longer rostrum, by the presence of the carpal crest, and by the absence of ornamentation on the anterior angle of the ventral margin of epimera 2. Although the shape of the rostrum is similar in both species, that of A. saltensis  is much more deflected, comparable in this respect only to that of the Brazilian species A. obstipa  . The globose major cheliped, with the palm inflated in the posterolateral region, is similar to that of A. septentrionalis  and A. affinis  ; however, these have the rostrum lingulate, much different from the new species.

One of the most marked characters of A. saltensis  , the absence of the palmar crest, is uncommon in aeglids, occurring only in A. jujuyana  , A. uruguayana  , A. marginata  , and A. septentrionalis  . These latter three species, however, do not share other characters with the new species.

Etymology: Named in honor of Salta Province, the type locality. 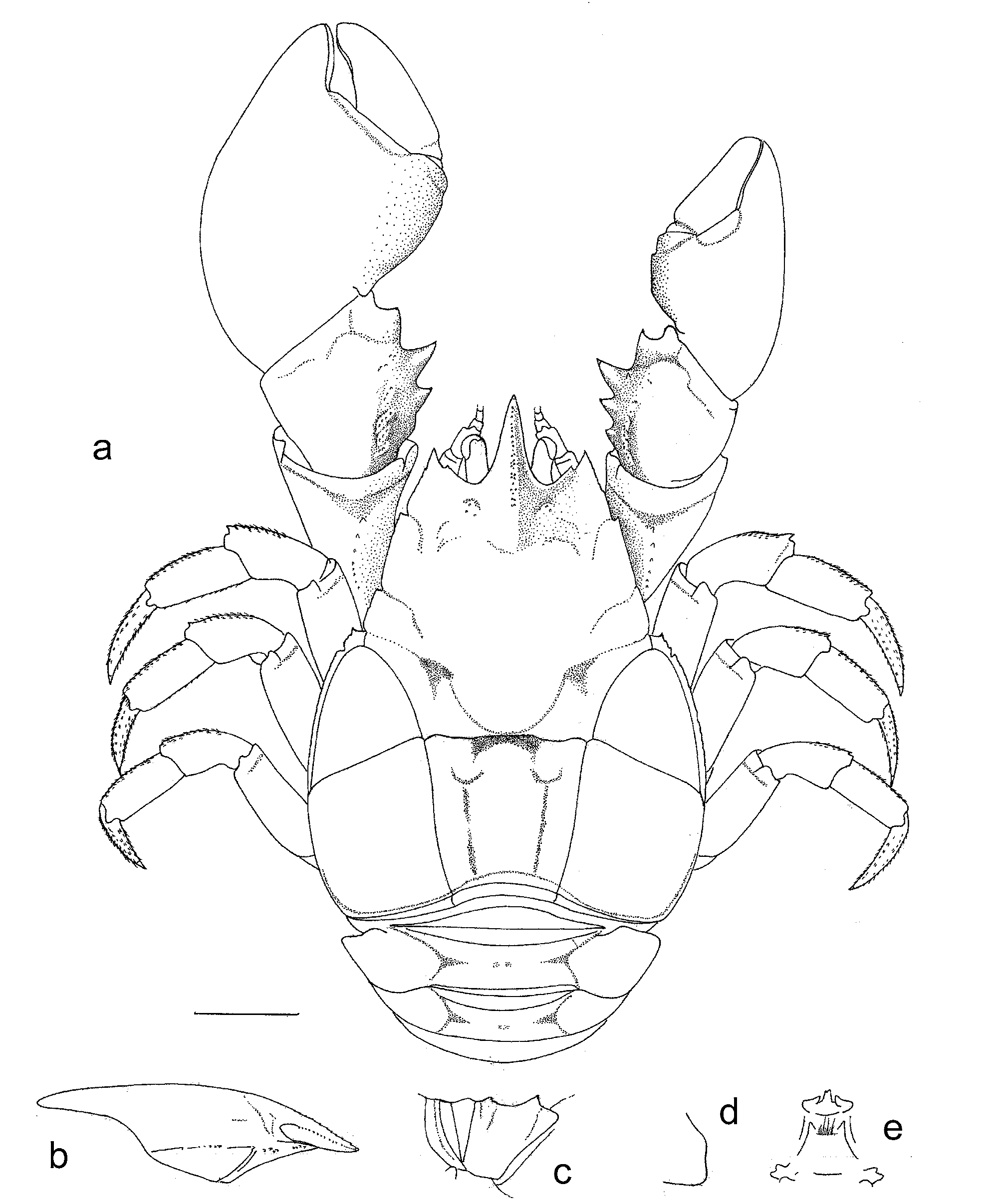