Macrae, Ted C., 2003, Agrilus (s. str.) betulanigrae MacRae (Coleoptera: Buprestidae: Agrilini), a new species from North America, with comments on subgeneric placement and a key to the otiosus species-group in Nor, Zootaxa 380, pp. 1-9: 2-6

The holotype will be deposited in the United States National Museum, Washington, DC.

Antennae: extending nearly to posterior margin of pronotum when laid alongside, inconspicuously setose; antennomere 2 fusiform; 3 narrower and subequal in length to 2; 4­10 serrate, slightly longer than wide except 10 which is as long as wide; 11 oblong.

Coloration was rather constant in the four males examined, while in females some variation was noted in the intensity of the cupreous and aeneous reflections on the head and pronotum. The prehumeral carinae vary from weak but distinct to nearly obsolete, and the pronotal depressions are more scarcely indicated in some specimens. The prosternal lobe is usually feebly emarginate medially but is a little more distinctly so in some specimens. Males measured 3.75–4.85 0.90–1.15 mm (mean = 4.35 1.02 mm, n = 4) and females 4.40–4.95 1.05–1.20 mm (mean = 4.70 1.13 mm, n = 8).

The type series was reared from small, fallen dead branches of river birch, Betula nigra L. This  plant is widely distributed across the eastern United States and is the only species of Betula  found in the middle and southern latitudes of the country. In Missouri, it grows naturally throughout the state in alluvial ground along streams and borders of gravel bars (Steyermark 1963) and is a dominant species in the wet bottomland forests of the southeastern lowlands (Nelson 1985). The trees with which the type series was associated may have been planted. Other Agrilus  spp. that have been associated with Betula  in North America include A. acutipennis Mannerheim, A. anxius Gory, A. cyanescens (Ratzeburg)  , A. obsoletoguttatus Gory, A. olivaceoniger Fisher  , and A. pensus Horn  (Knull 1922, Fisher 1928, Bright 1987). Of these, only A. pensus  has been reared from B. nigra  (Fisher 1928, Knull 1930, MacRae and Nelson 2003). No other member of the otiosus  species­group has previously been associated with Betula  .

Males of A. betulanigrae  will key to A. frosti Knull  (Fisher 1928, Wellso et al. 1976, MacRae 1991); however, they can be immediately distinguished from this and all other congeners by their distinctively bent genitalia with subquadrately expanded parameres that are suddenly narrowed apically. Gayle Nelson kindly compared a male paratype with the unique holotype of A. hazardi Knull  and confirmed they are not the same species. Females lack distinguishing morphological characters that allow them to be separated from females of related species.

The specific epithet, a compound noun in the genitive case, is derived from Betula nigra  , from which the type series was reared. 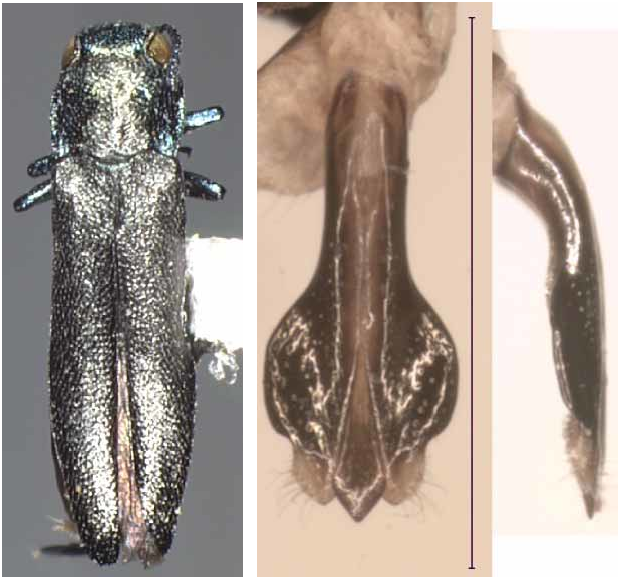