The results confirmed the occurrence of two syntopic species of Enteromius  with a smooth dorsal fin ray in the Lake Edward system. Specimens of group A were conspecific with the types of E. alberti  , except for one type specimen, which was assigned to group B, and with the holotype and paratypes of E. cercops  . Enteromius alberti  used to be considered a synonym of E. stigmatopygus  . Based on our results, and following the principle of priority for species names, we propose to revalidate E. alberti  with E. cercops  as its junior synonym. A redescription of E. alberti  is provided based on the lectotype (here designated) ( Fig. 7aView Fig) and one paralectotype of E. alberti  , the type series of E. cercops  , here synonymised with E. alberti  , and the additional specimens from the Lake Edward system examined in this study and identified as E. alberti  (n = 37). The other paralectotype of E. alberti  , which was revealed not to be conspecific with E. alberti  , was not included in the redescription. The measurements and meristics can be found in Table 2. An illustration of a fresh specimen of E. alberti  , captured during the HIPE expeditions is provided in Fig. 7bView Fig.

The specimens of group B were most similar to E. mimus  , though the PCA on log-transformed measurements ( Fig. 6View Fig) suggested some differences. Therefore, we decided to assign the specimens of group B to E. cf. mimus  with “cf” indicating specimens that are comparable to E. mimus  but whose identification is uncertain ( Decru et al. 2016). Because of the unsuitable original description of E. mimus  for modern taxonomic purposes, we decided to make a redescription based on the lectotype (here designed) ( Fig. 8View Fig) and eight of the nine paralectotypes of E. mimus  . We found one paralectotype to have a serrated dorsal fin ray; therefore, it was considered not to be conspecific with the other types and excluded from the redescription. Specimens from the Lake Edward system identified as E. cf. mimus  , the specimens from Tshambi and the aberrant lectotype of E. alberti  were not included in the redescription, but their measurements and meristics are given in Table 2. A picture of a fresh specimen of E. cf. mimus  is given in Fig. 9View Fig.

For both redescribed species, a lectotype was chosen from the syntypes. For E. alberti  , this is the specimen illustrated in the original description by Poll (1939), which is also the largest specimen. The lectotype of E. mimus  is the specimen that resembles most the original figure of E. mimus  in the Catalogue of the Fresh-water Fishes of Africa in the British Museum (Natural History), Volume IV, by Boulenger (1916). The sampling sites of the two species in the Lake Edward system and the type localities of E. mimus  , E. alberti  and E. cercops  are illustrated in Fig. 10View Fig. The specimens from Tshambi, initially identified as E. alberti  , are indicated as E. cf. mimus  on the map, as found in the present study. 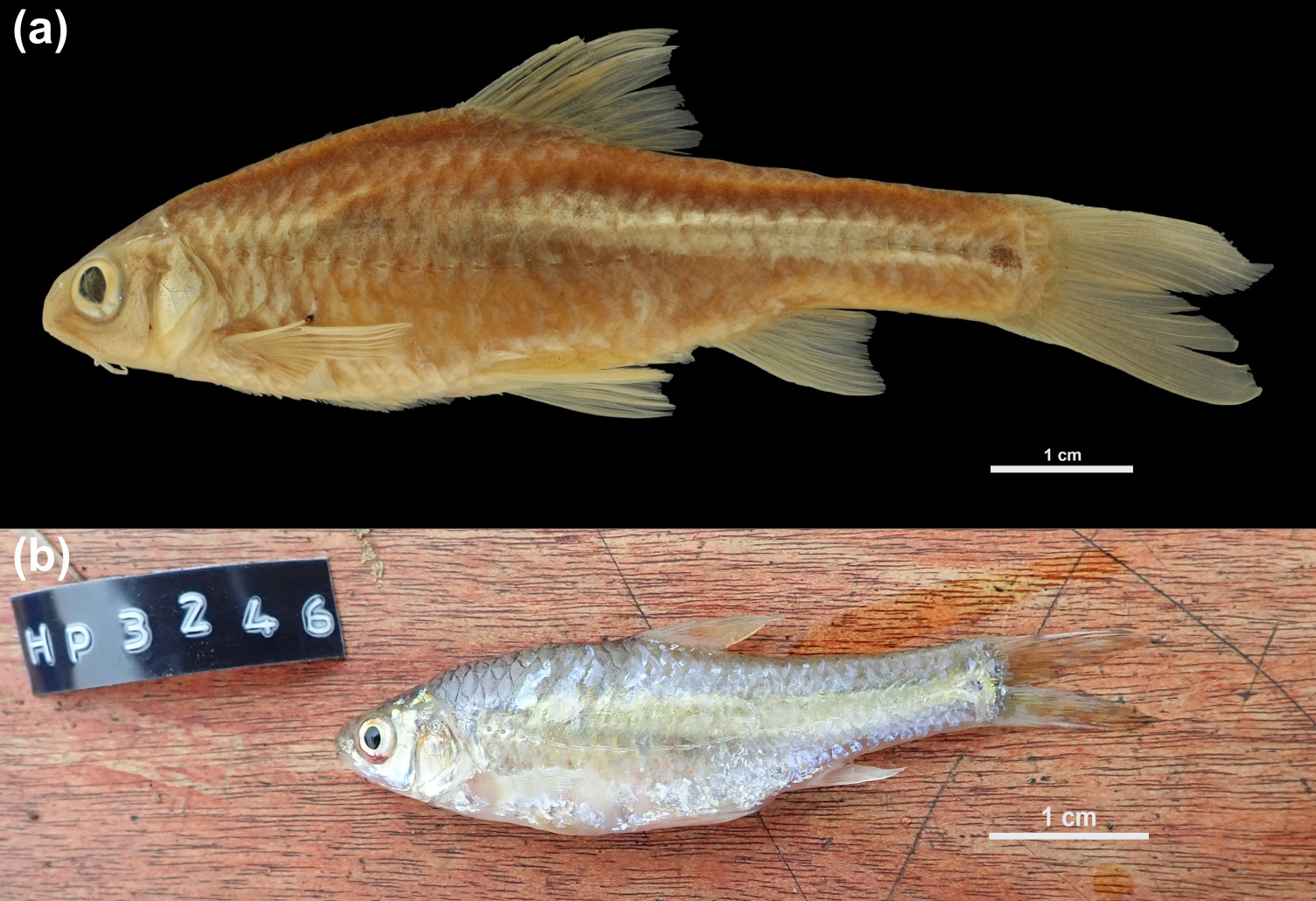 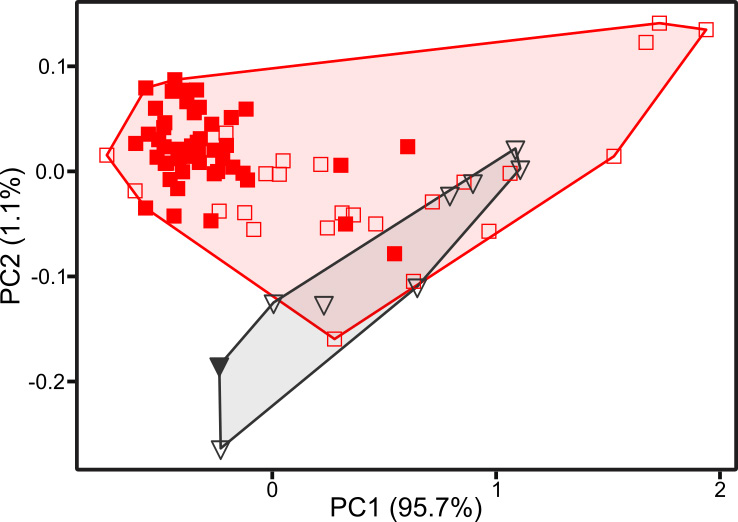 Fig. 6. Scatterplot of PC2 against PC1 of the PCA (n = 83) on 24 log-transformed measurements. For group B, the filled squares (■) represent the specimens used for the genetic analysis, the open squares (□) indicate the additional specimens of the Lake Edward system and the two specimens from Tshambi. Specimens of E. mimus (Boulenger, 1912) (lectotype) (▼) and E. mimus (paralectotypes) (▼). 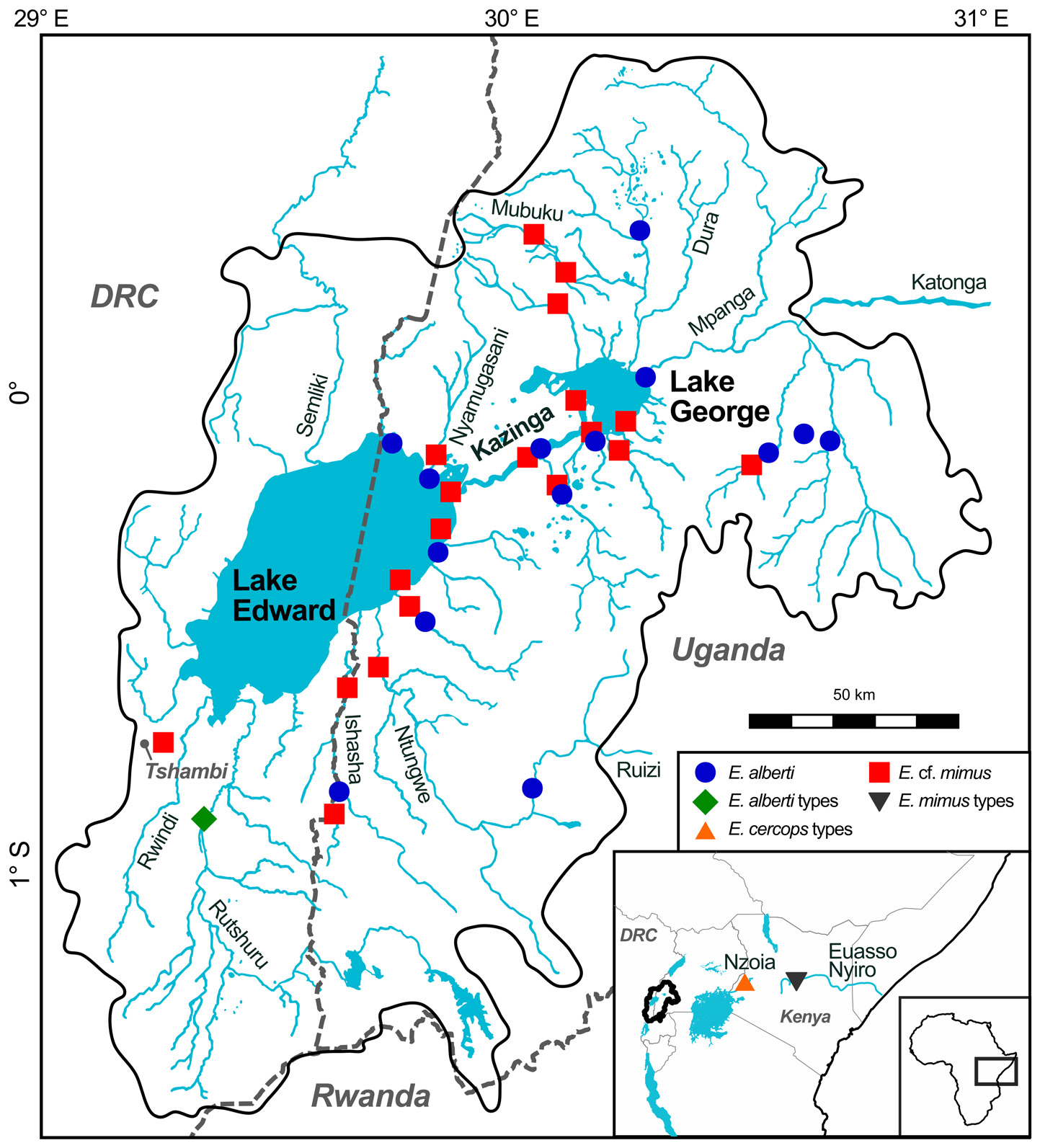